Alexander: The seemingly countless amusement parks of the greater Tokyo area come in all shapes and sizes – most are small, but several are surprisingly big once you’re inside (Tobu Zoo), and some are utterly massive (DisneySea, Yomiuriland). Perhaps the biggest small park in Tokyo (or maybe the smallest big park) is Toshimaen?

We rolled in on a wet morning and went straight to the back of the Toshimaen for a ride on their standard Arrow Corkscrew.  While the layout is something we’ve all seen a few times before, the rolling stock is what makes this ride special: rare Arrow 3rd generation looping coaster trains (those lucky enough to ride Drachen Fire at Busch Gardens Williamsburg should recognize these immediately, as will fans of Circus Circus’ Canyon Blaster). 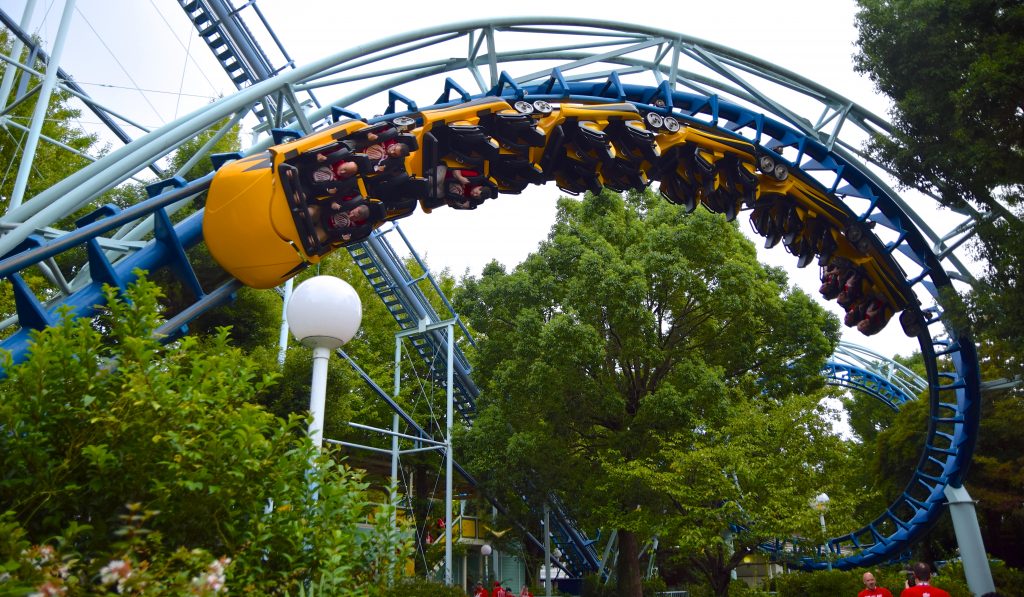 Don’t let Cyclone‘s gentle slopes and wide turns fool you! This is ride hauls ass; I can’t think of another steel coaster from the 60s that delivers such an intense ride. 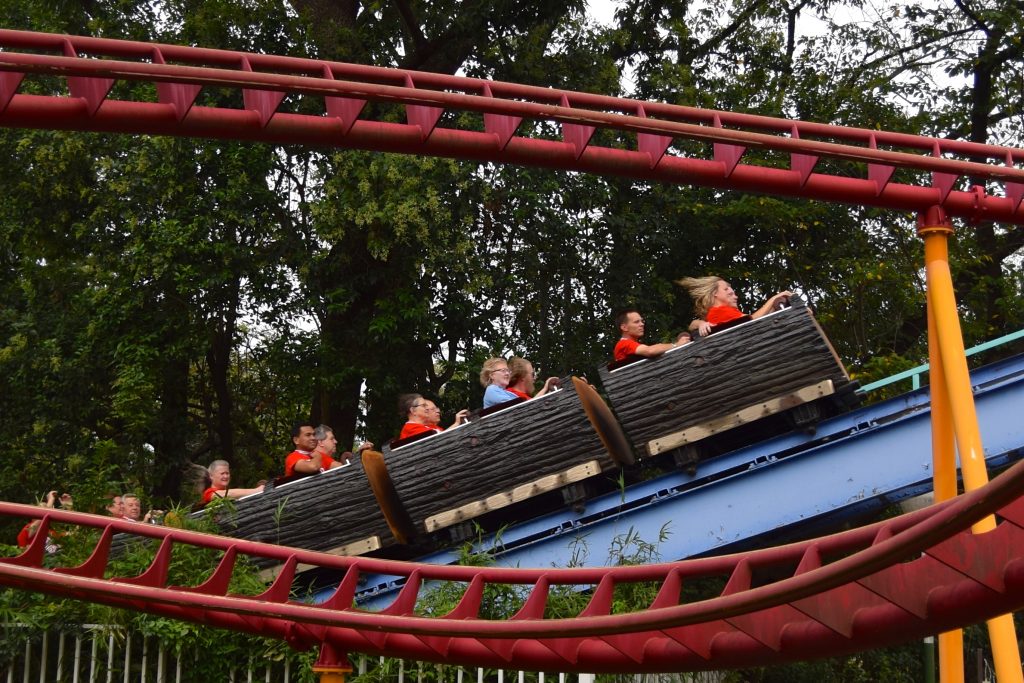 Toshimaen has an affinity for building rides on rooftops. Flat rides are definitely the popular choice for that application, but the park’s Mack Blauer Enzian is perched up high as well.

Another nice surprise here is (what appears to be) an old Arrow flume. It’s not very long, but definitely worth the 20min wait. 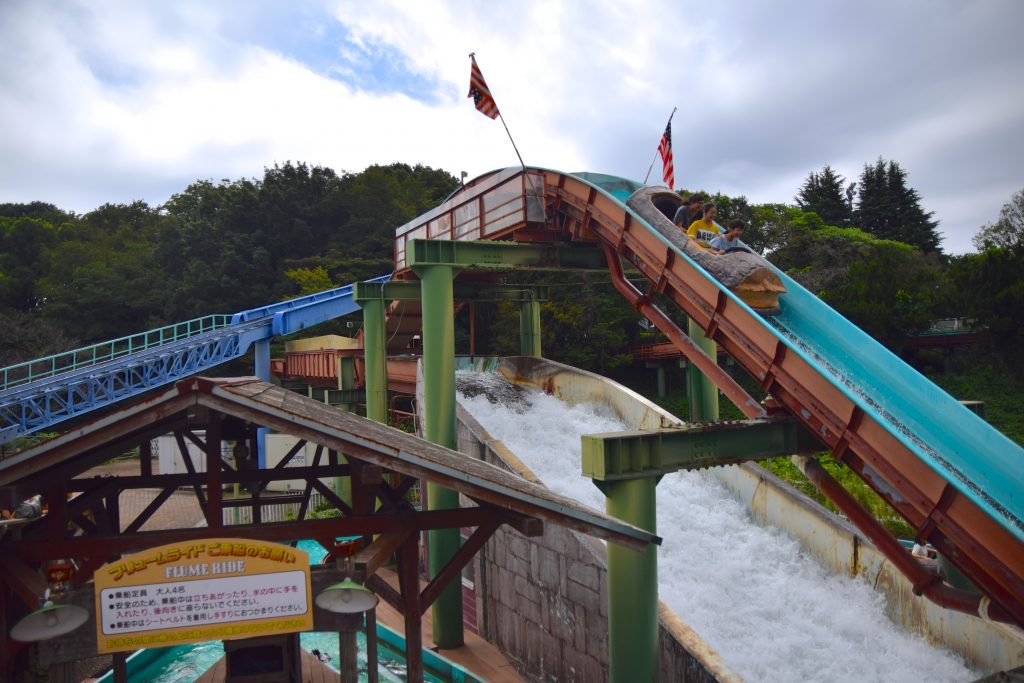 The gargantuan Intamin “Flying Pirates”, like Nagashima’s application, appears to have vastly more capacity than this park could ever need. Even on the busiest days (prior to Japan’s regional park slump of the mid-2000s), I can’t imagine needing a giant, double Intamin Buccaneer with 4x the capacity of the standard model. 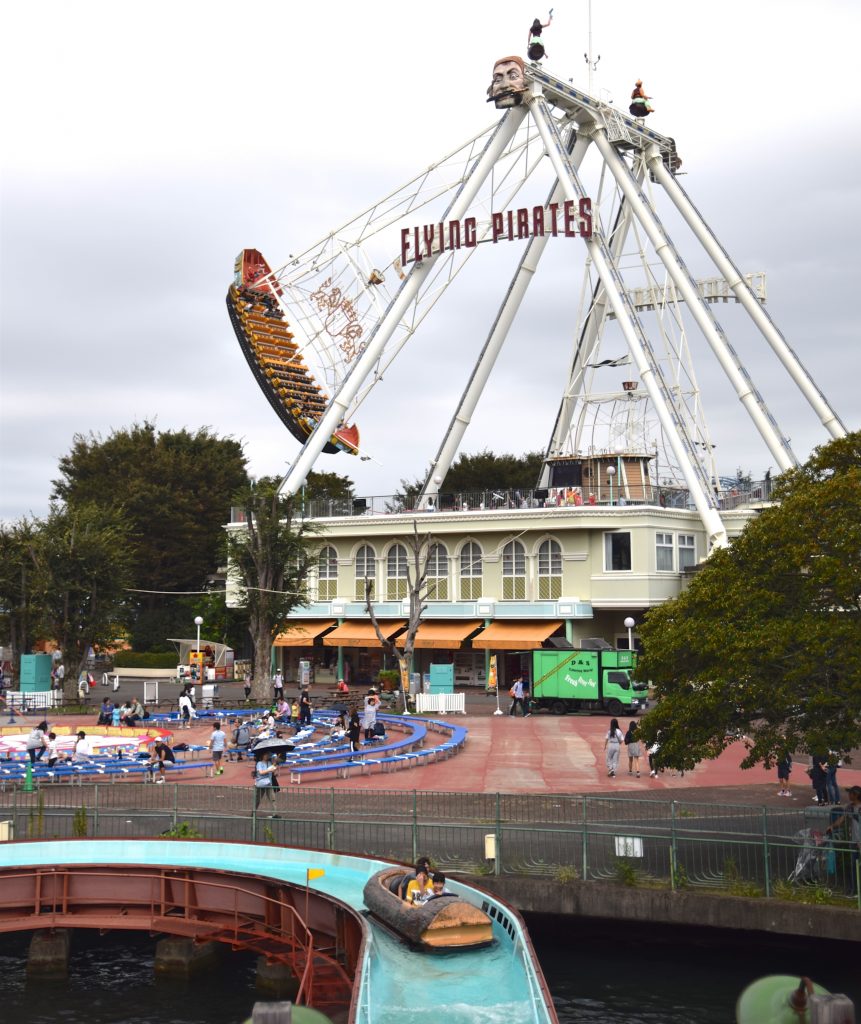 As we would soon find out, kiddie log flumes are quite prominent in Japan (perhaps even more so than full-sized ones). 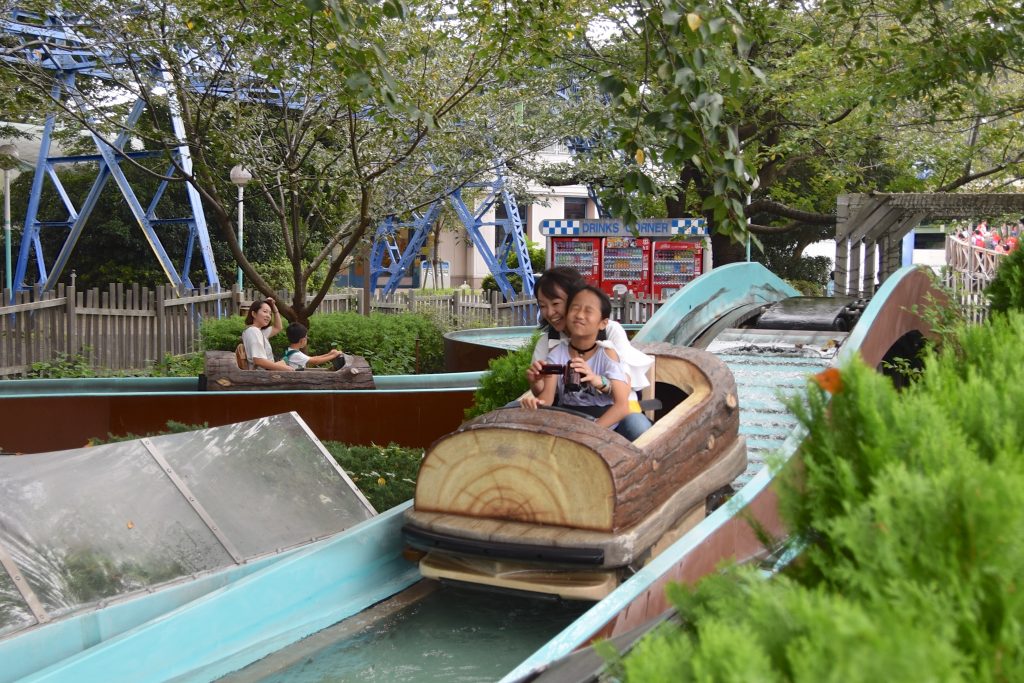 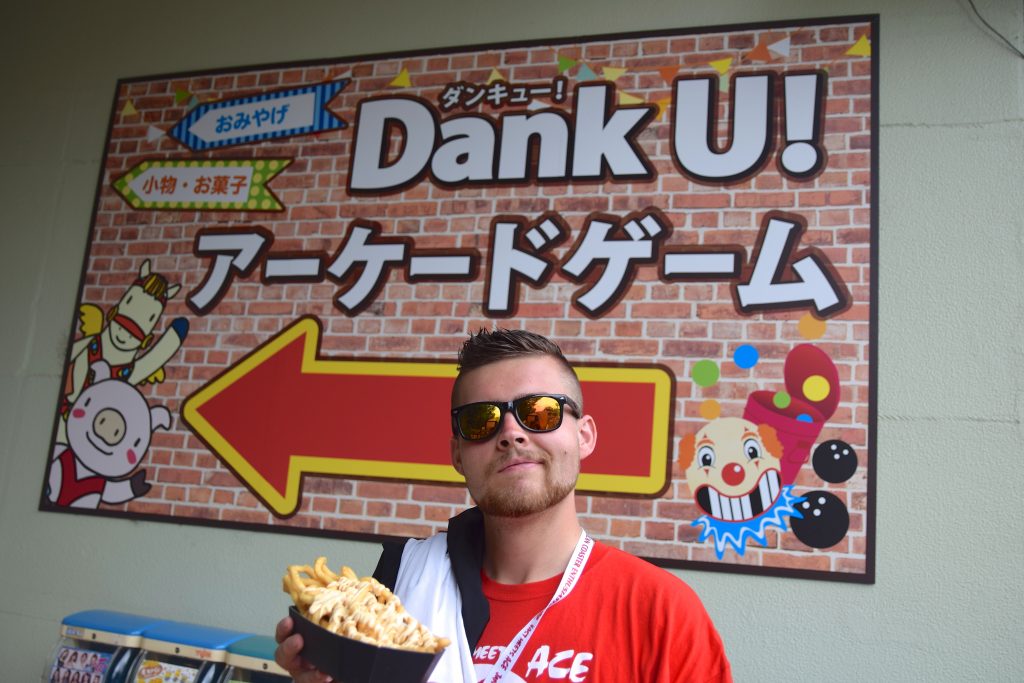 Obviously the priority for us in the “Flat Rides on Roofs” department was the Condor. 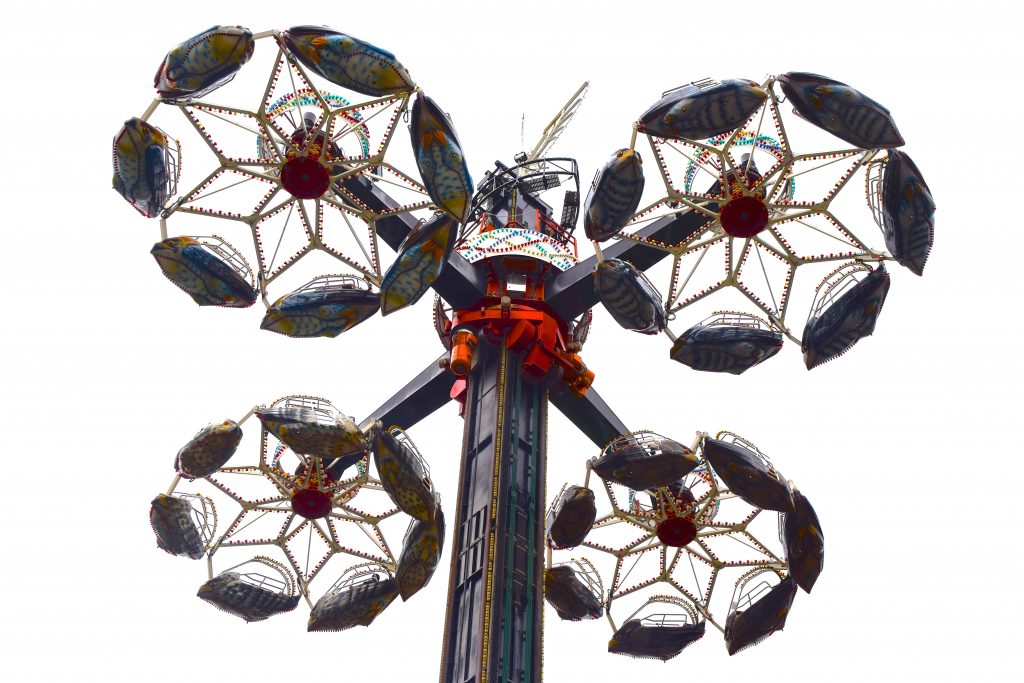 Great views are to be had on the wings of Huss’s best flat ride. 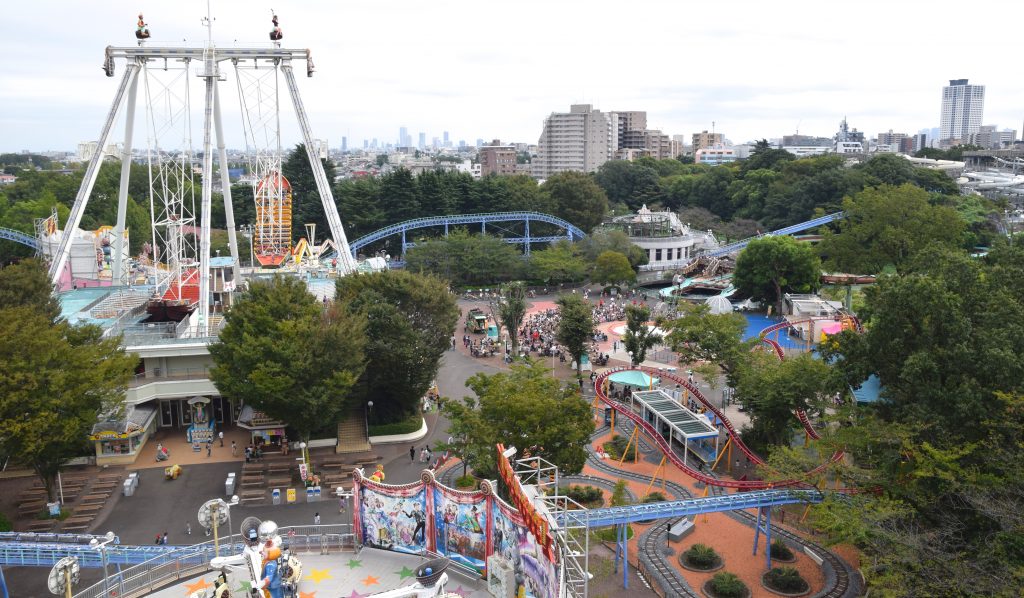 There’s a few things of interest here: notice the ADDITIONAL INTAMIN PIRATE SHIP there on the right? Again, like Nagashima Spa Land, the gargantuan Flying Pirates just wasn’t enough to keep up with demand back in the day.

Here we have the demolition of the station for the Schwarzkopf Shuttle Loop, which was retired in 2008 (Yes, the station stood empty for a decade before Toshimaen finally put it out of its misery). Slow progress is progress nonetheless, I suppose. 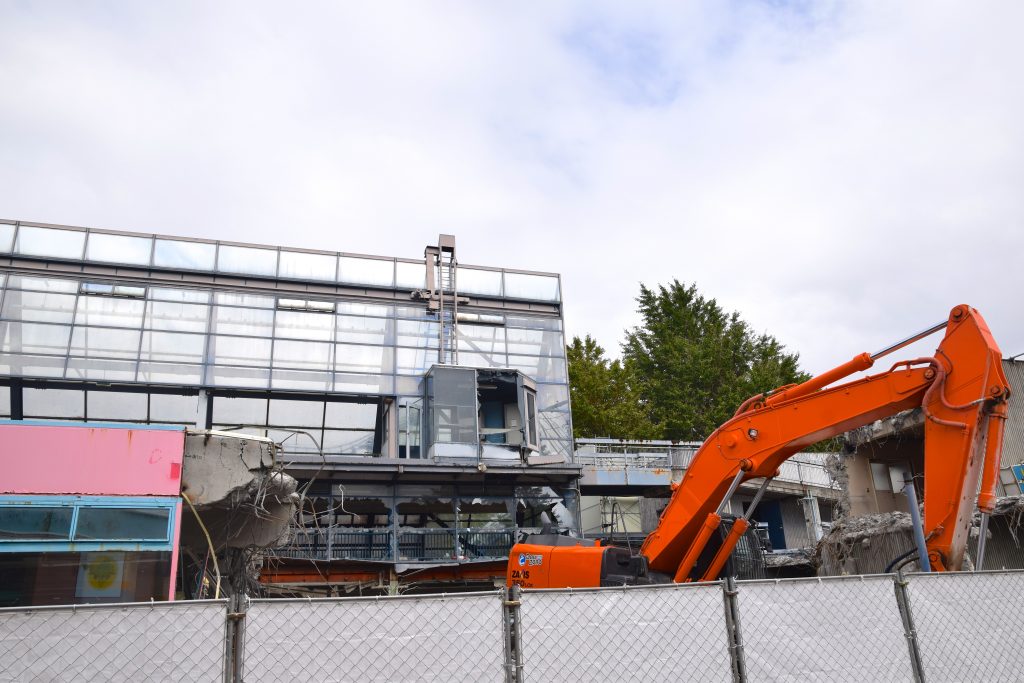 Live entertainment! Who needs a Schwarzkopf looper when you’ve got CAGES OF DEATH?! 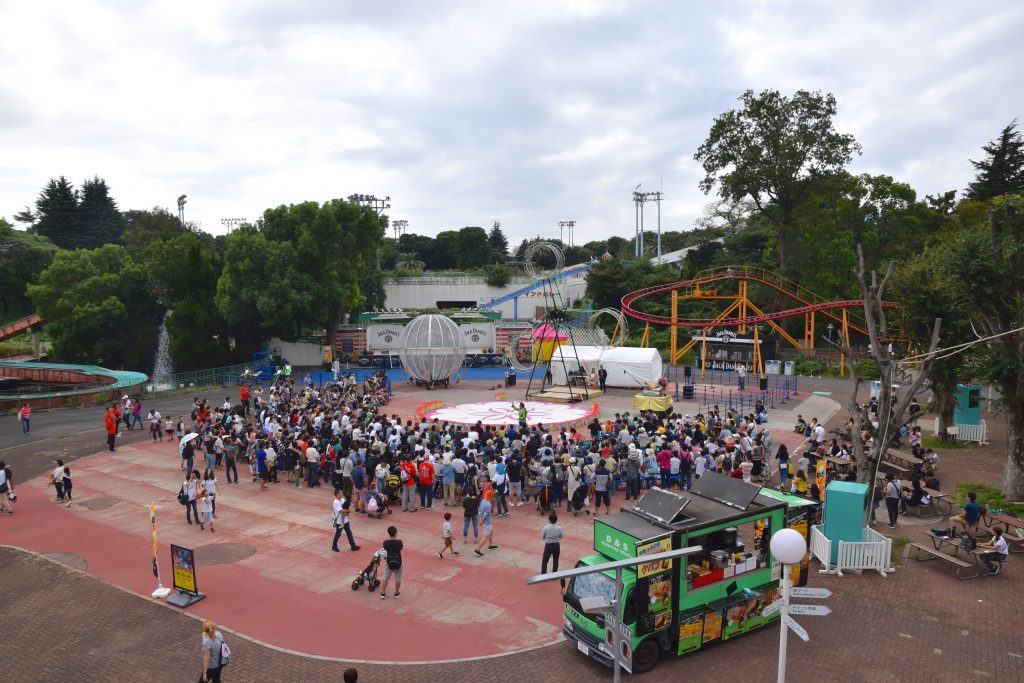 Not the lease of which being this AMAZING BABY CONDOR THAT I HAVE NEVER SEEN THE LIKES OF BEFORE!!!!!! 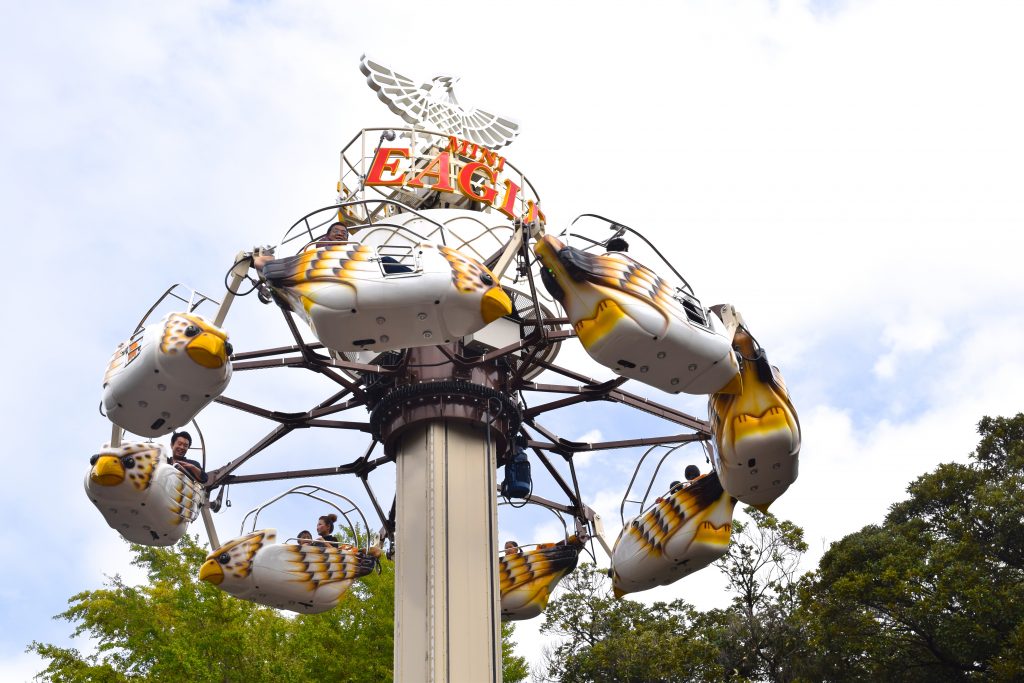 Look at this…have you ever laid eyes on something this cute? No. You haven’t. 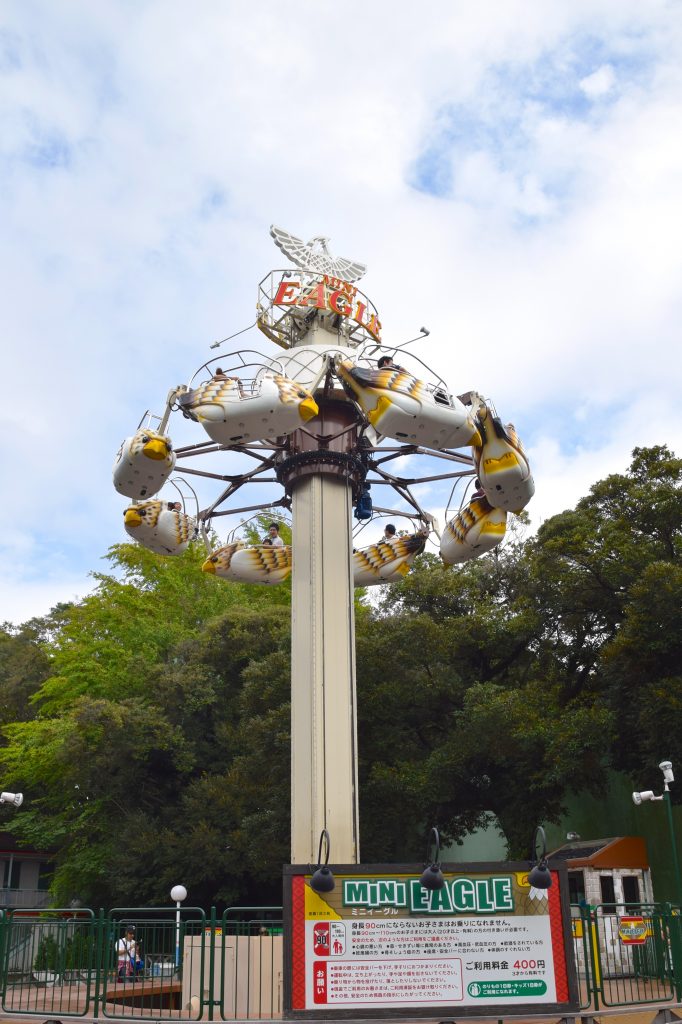 Considering what a massive Huss Condor enthusiast I am, I’m a little surprised/disappointed in myself that I didn’t know a tiny version of the ride existed. I never knew such a concept or product was offered, let alone a flesh-and-steel installation.

As you can see, it’s far less complex than a standard Condor. Instead of 4 scrambling sets of 7 birds, a single disk of 8 birds encircles the tower. 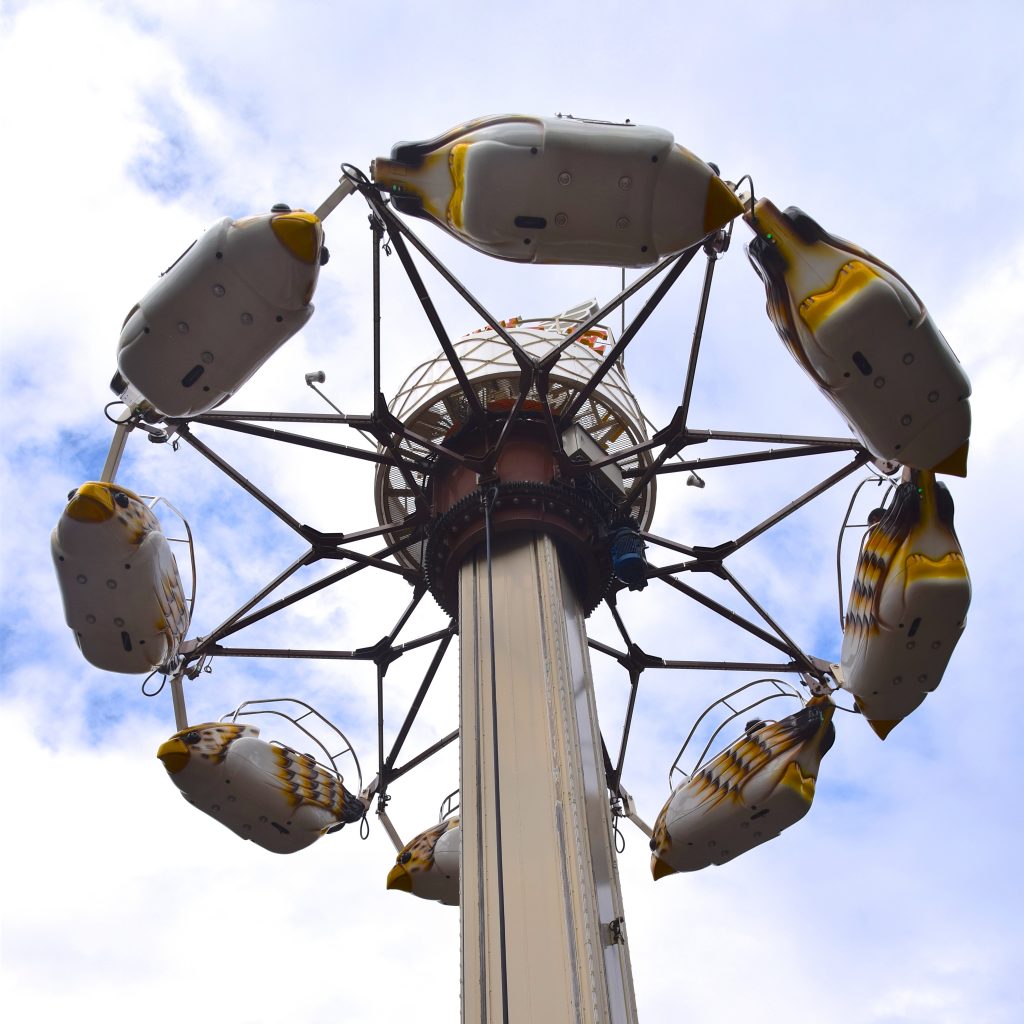 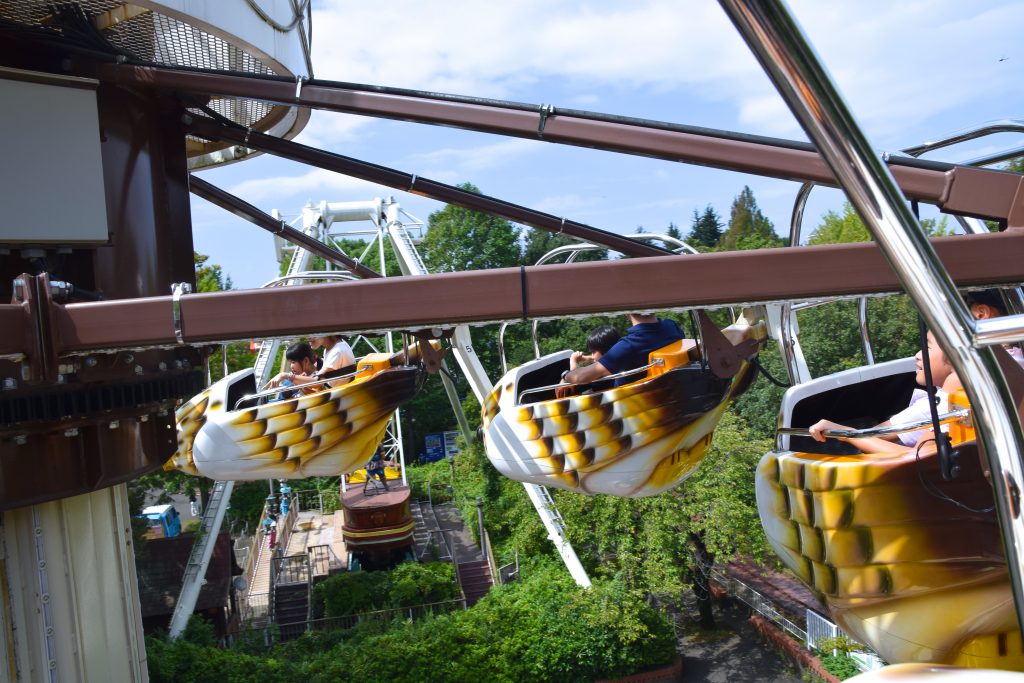 I’d be lying if “Baby Condor” wasn’t the highlight of my visit to Toshimaen. What an amazing surprise! 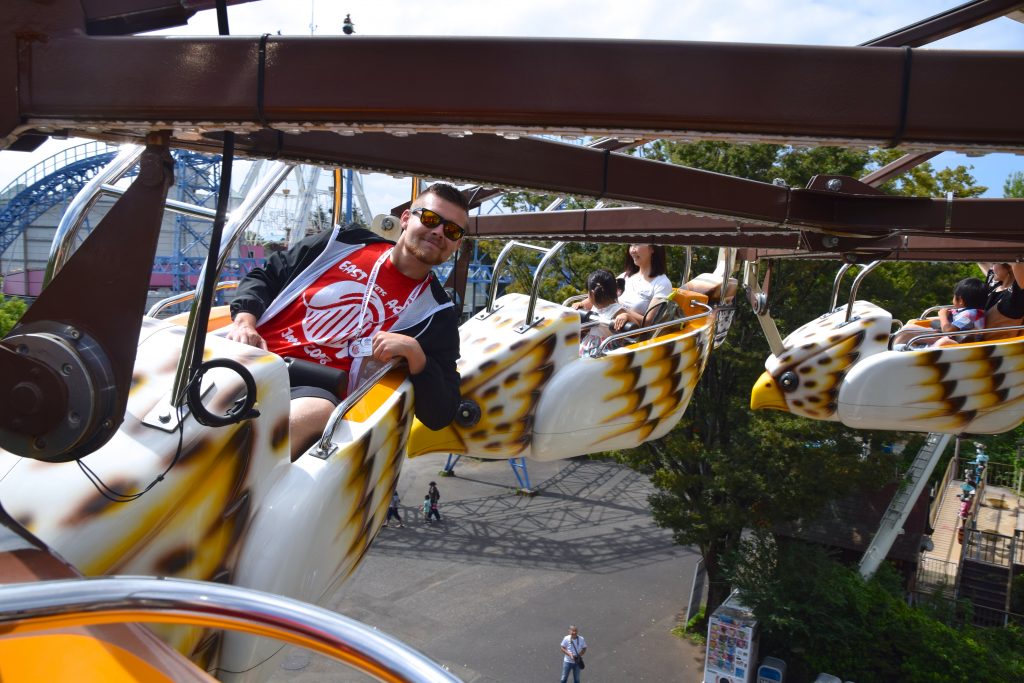 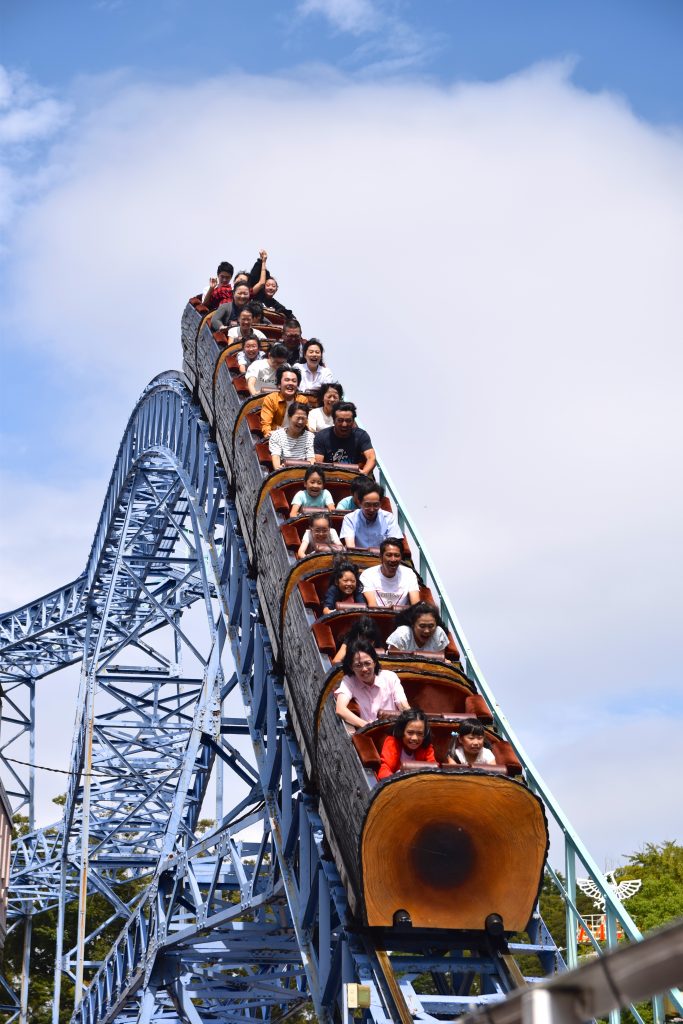 Time to start wrapping up our time at Toshimaen! Last call for the kiddie log flume! 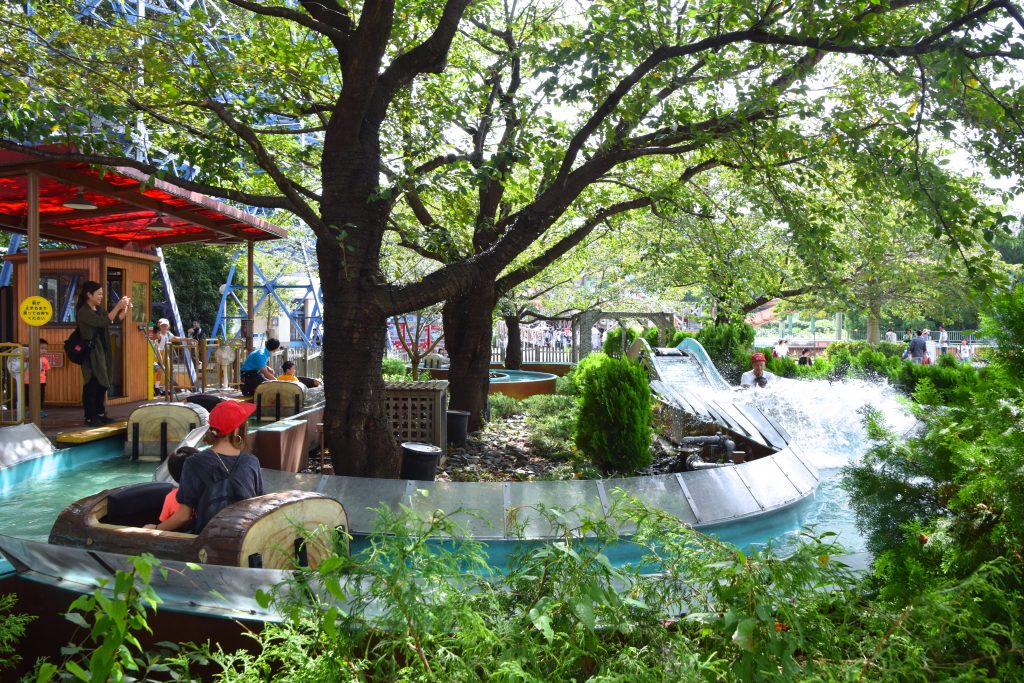 It’s still so crazy to me, seeing this Disney-level people eater at such a quaint park. If California Adventure had put a Flying Pirates in Paradise Pier, I don’t think people would’ve complained as much about “off-the-shelf rides” with “long lines and short cycles.” 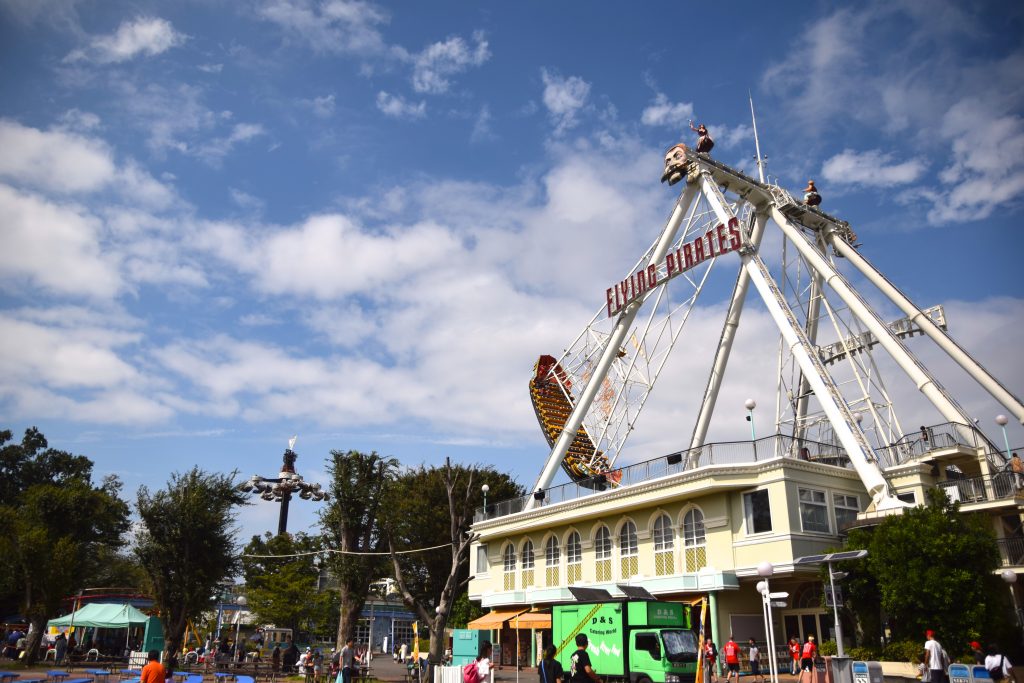 Oh! But what’s this over here?? 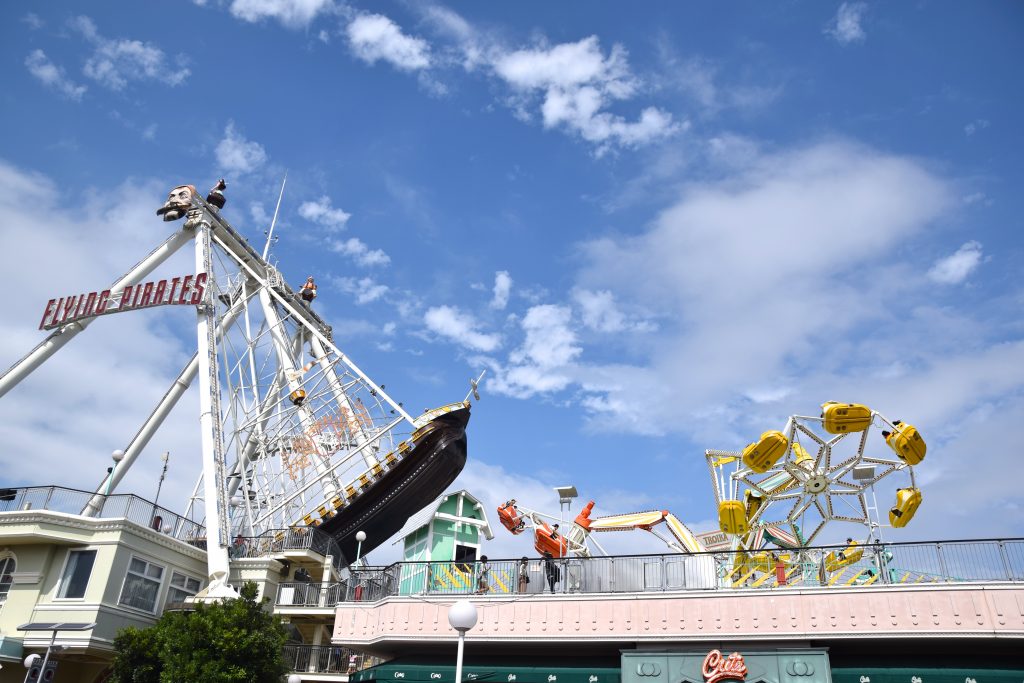 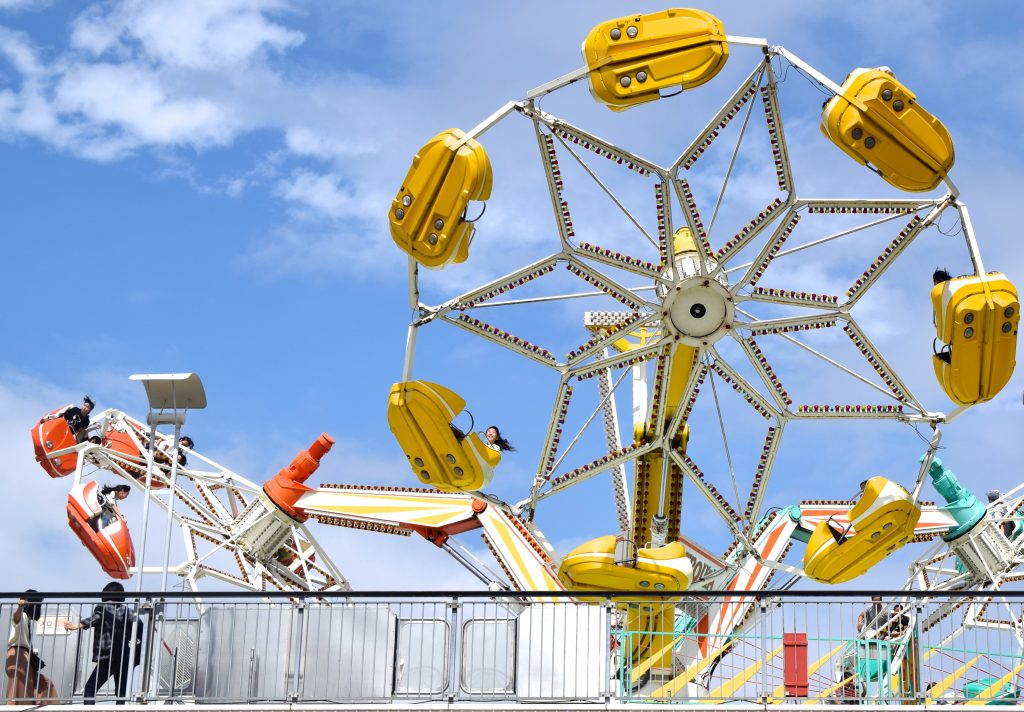 An application like this makes me wonder why rooftop flat rides aren’t more of thing. This Troika is substantially elevated, both literally and figuratively. 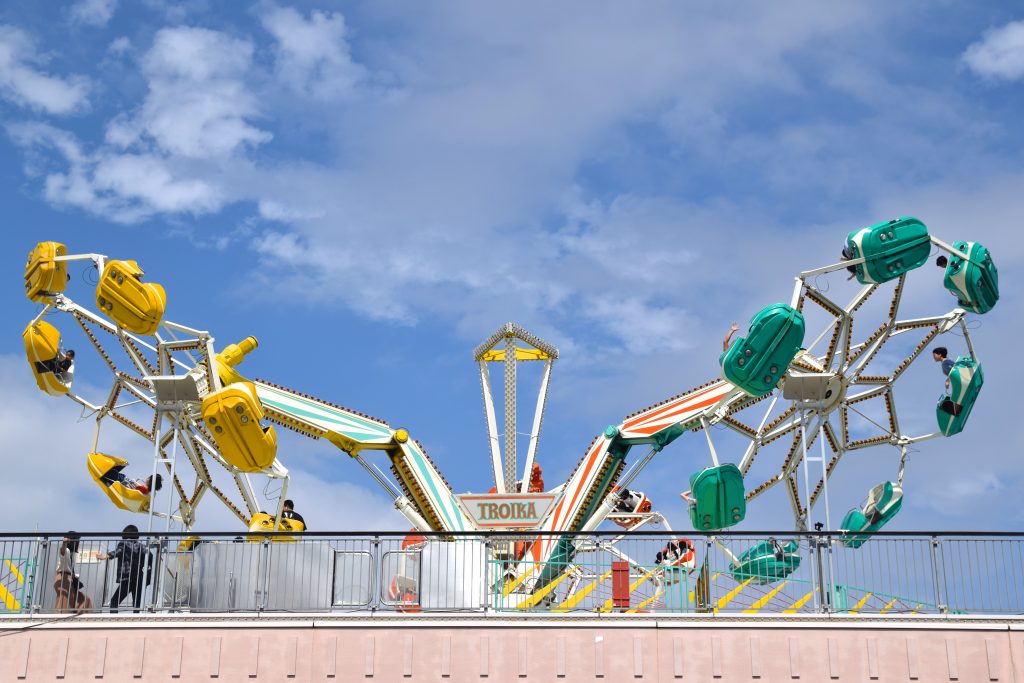 Bye-bye, Toshimaen! Thank you for showing us such a great time! 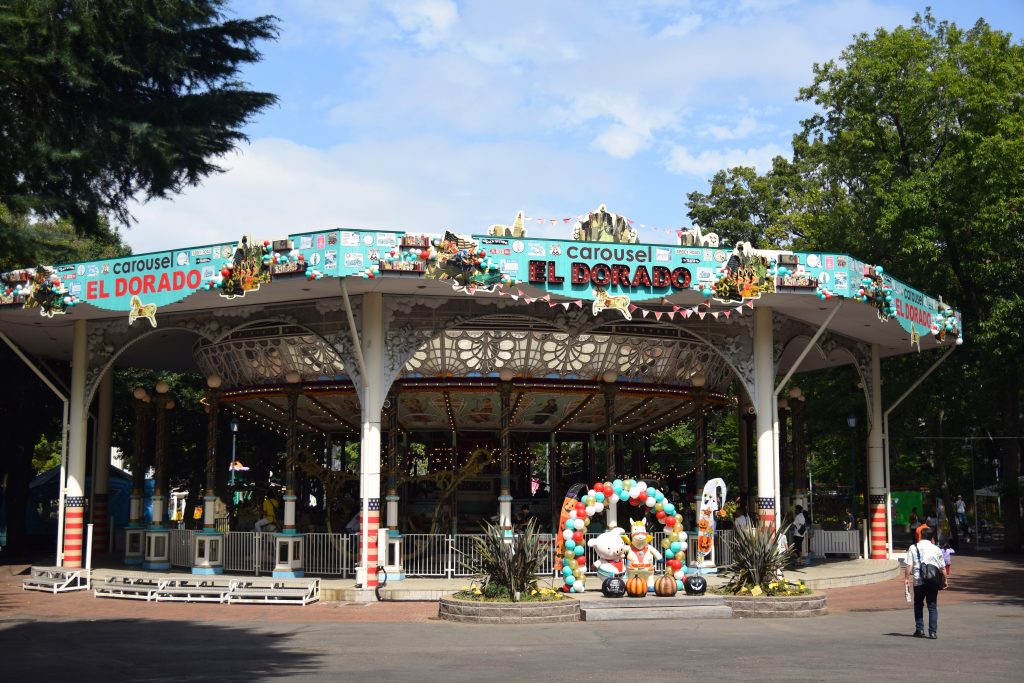 I’m excited to see what this park has in store for the future. The last 10 years or so may not have been the smoothest for the park (or any Japanese park, for that matter), but I think Toshimaen is poised to make some big moves.

Check out these other recent Asia reports: