Alexander: The day before Typhoon Trami made landfall, we visited two unique parks in Nagoya. Things didn’t exactly go as planned, but we had a great day anyway! 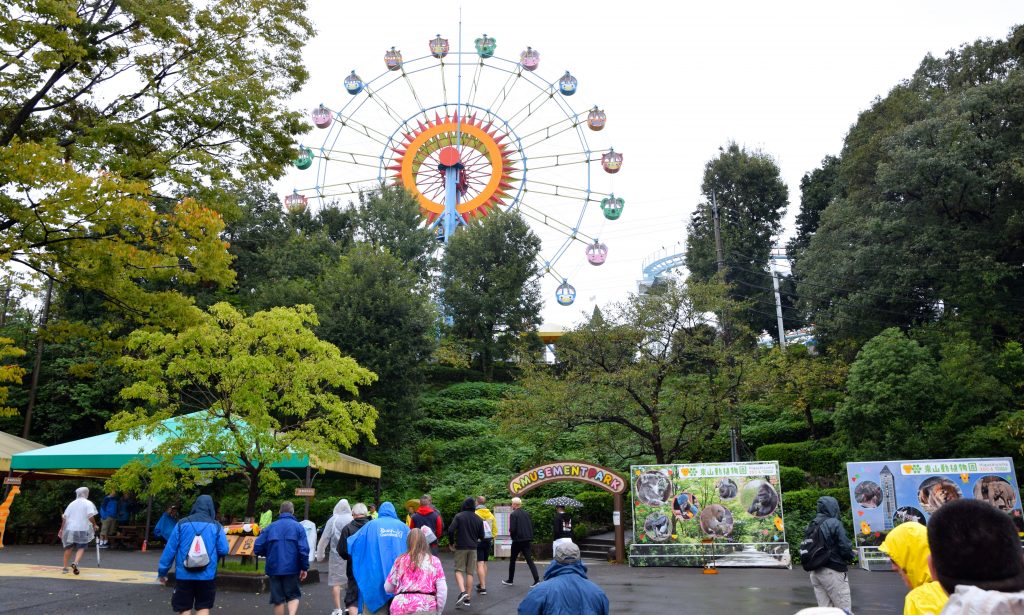 The standard steel Bear Coaster didn’t seem at all different from coasters we’d already enjoyed in the rain on our visit, but it was closed all the same. 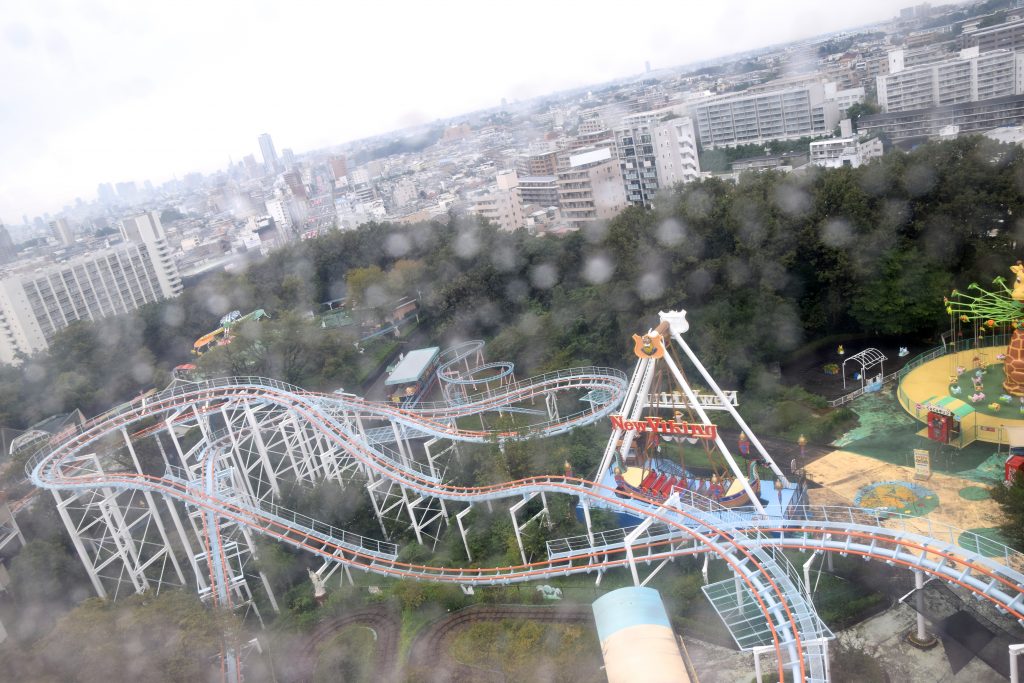 Slope Shooter, Higashiyama’s one-of-a-kind concrete side friction coaster, simply cannot run in the rain (due in part to the fact that the vehicles are caught by hand as they return to the station). The park was kind enough to let us see the ride in action, however. 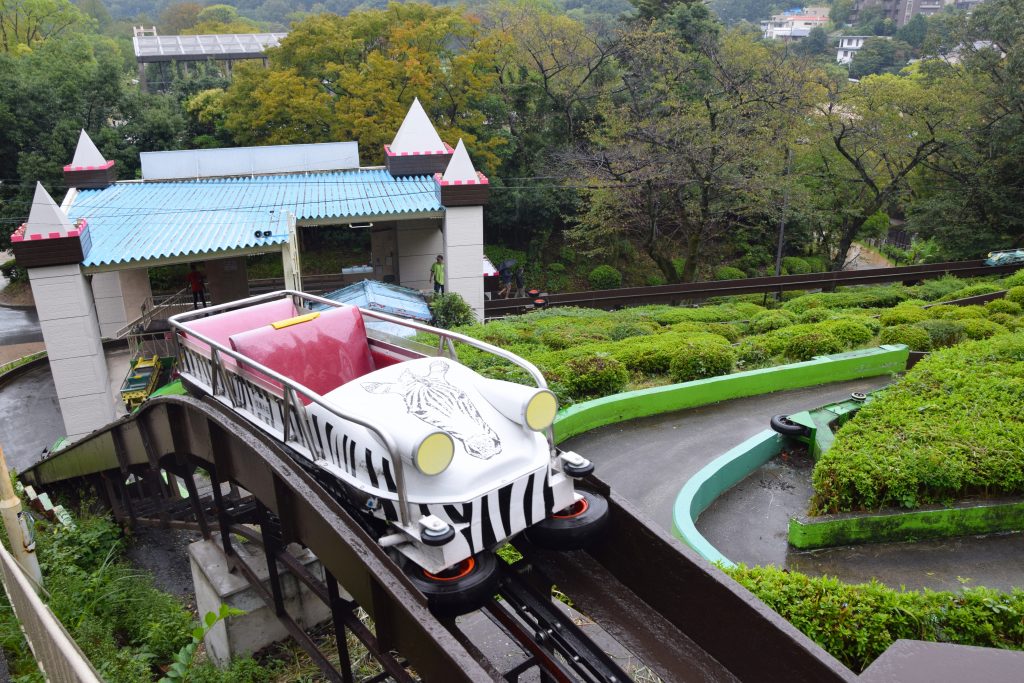 Even with the coasters out of commission, we had a good time at the park. 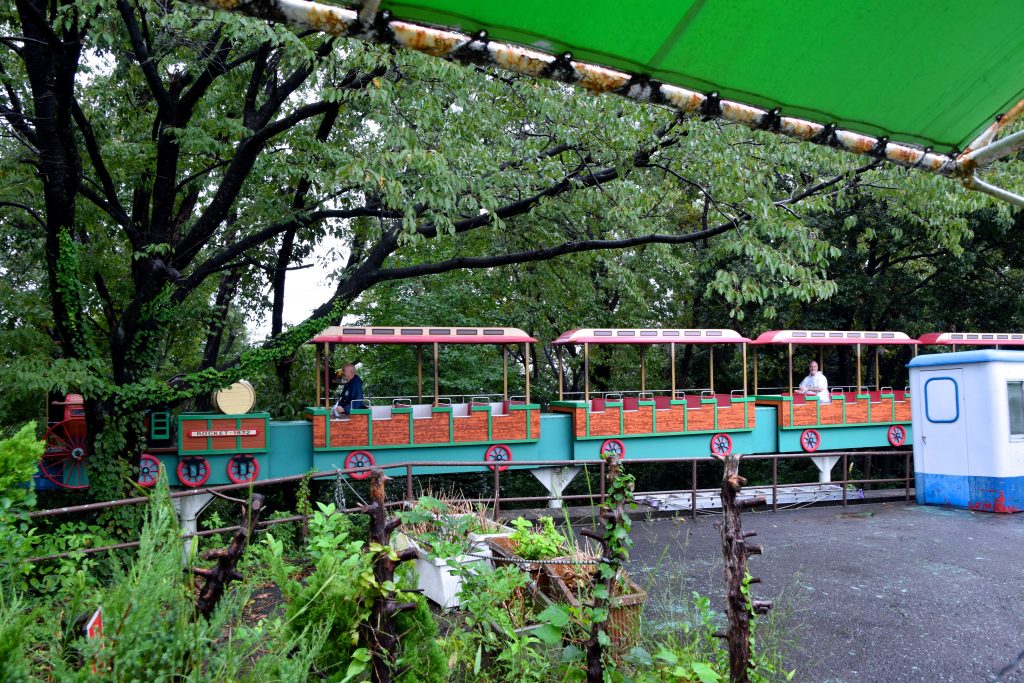 We earned ourselves a rare flat ride credit with this crazy-looking thing! Basically a Paratrooper meets a Calypso. Super fun!

“Hey babe, lemme take your picture with this coaster we can’t ride!” 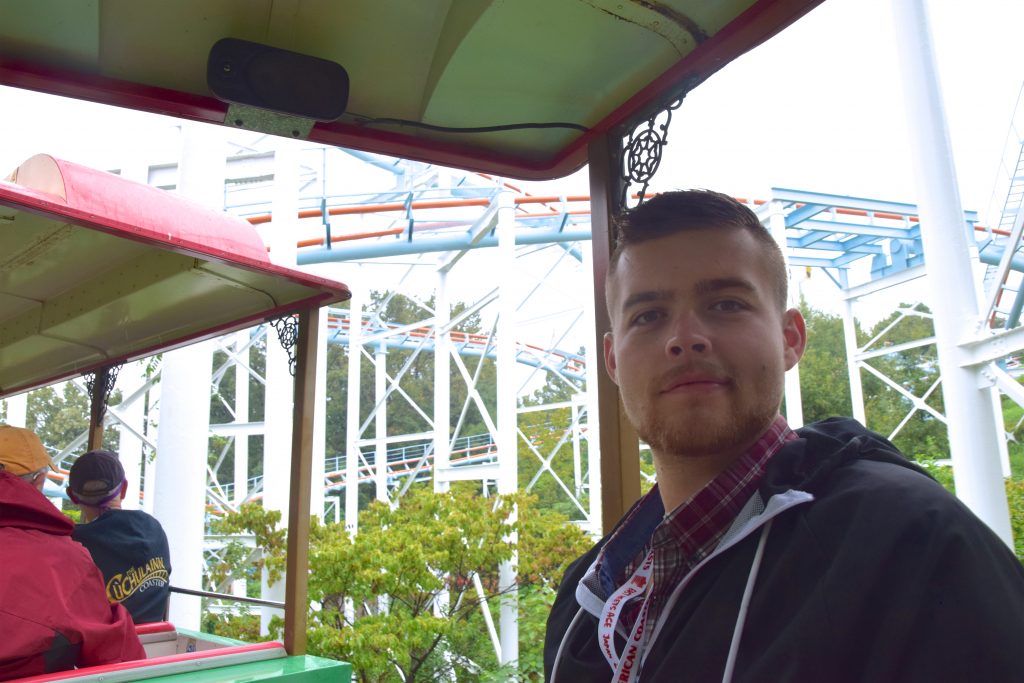 A large observation tower just outside the park’s boundaries (but still part of the park’s attractions) offers amazing views of Higashiyama’s vast expanse. 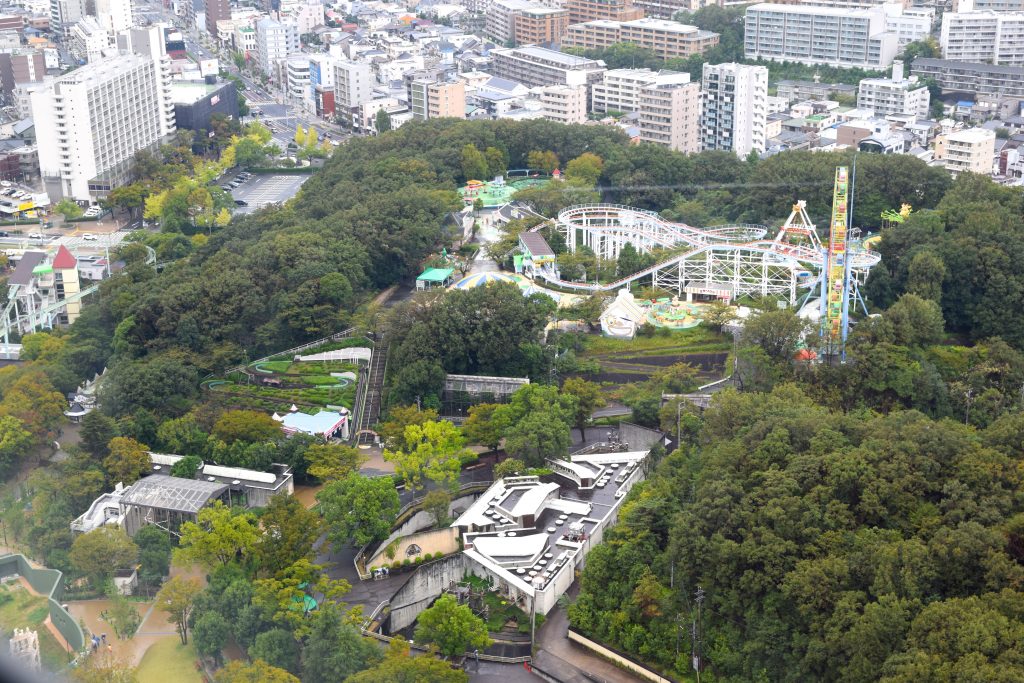 We spent a lot of time exploring the vast animal exhibits; things aren’t quite on par with Ocean Park or the Nagoya Aquarium, but definitely better than Tobu Zoo. 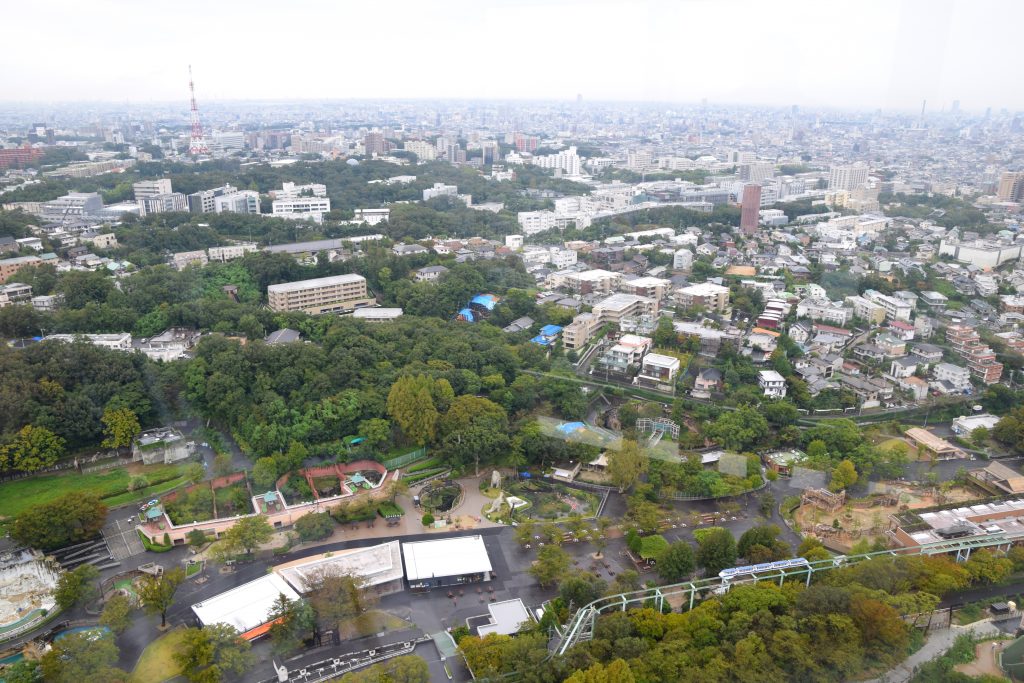 The day’s other park, Suzuka Circuit, is full of surprises (and a few rides that may or may not be roller coasters). Suzuka was one of the parks that we presented a plaque to, as co-hosts of the ACE Meets East tour. Definitely a park deserving of recognition! 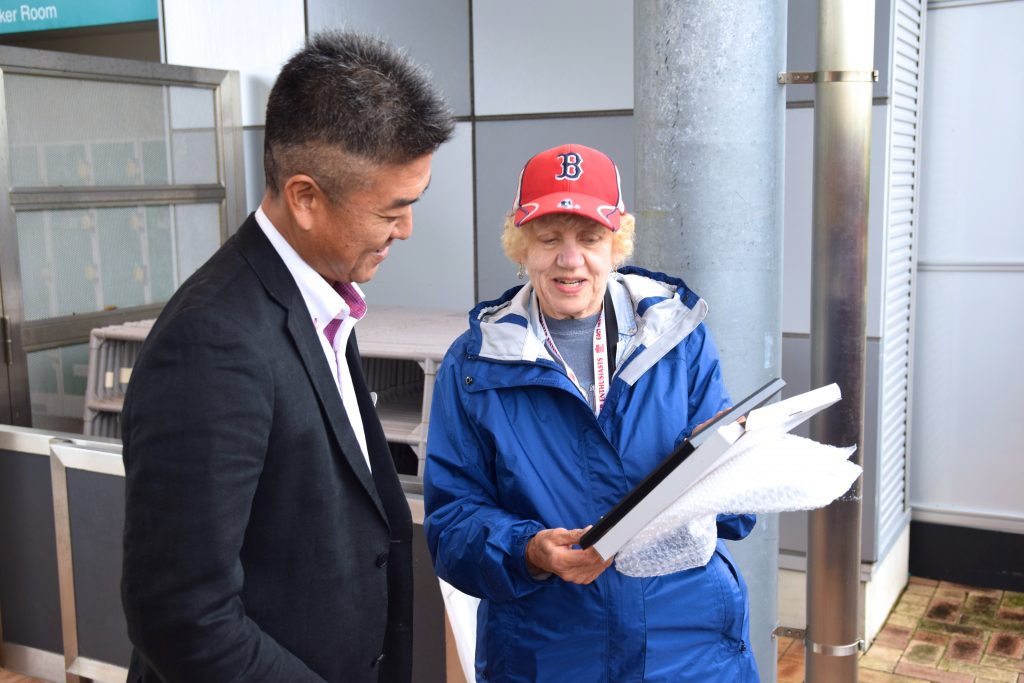 Despite a steady downpour and an utter lack of crowds, EVERY ride at Suzuka Circuit was open for our enjoyment (or, at least, until we broke one of them).

The park’s quirky Adventure Drive coaster stalled out during our ride. We were the first car out, and while we were able to experience 90% of the ride, the tire drives just before the last turn into the station were no match for almost 1000lbs of slippery-wet ACE members! Below is where our car stalled, and where we were evacuated.

Below are some cell phone shots of the evac process! 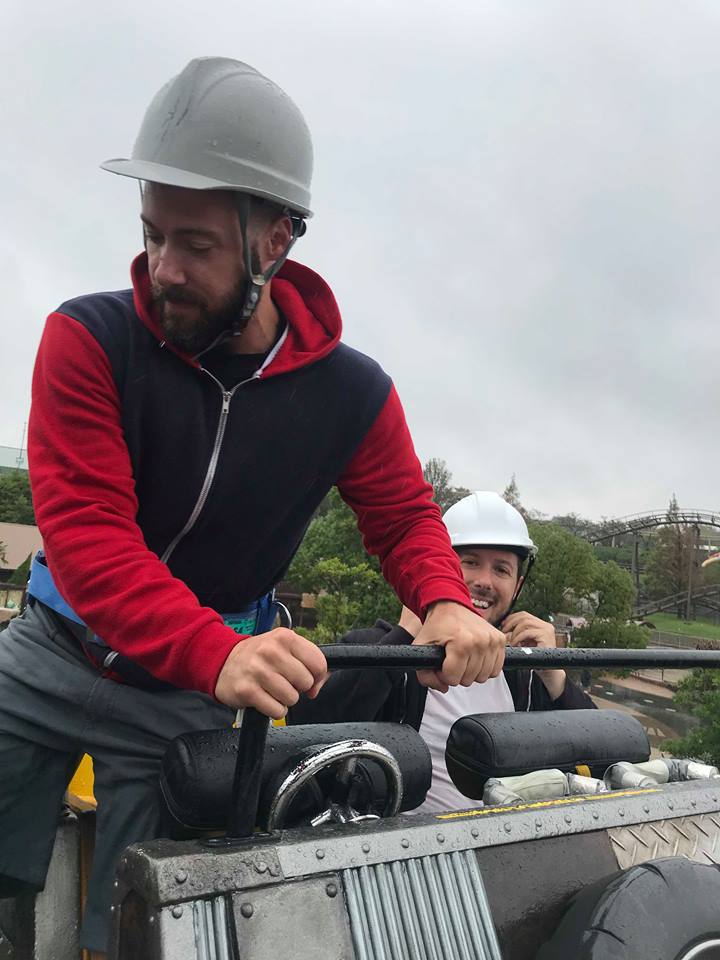 Yes, we still counted the credit even though we didn’t ride 100% of the ride. 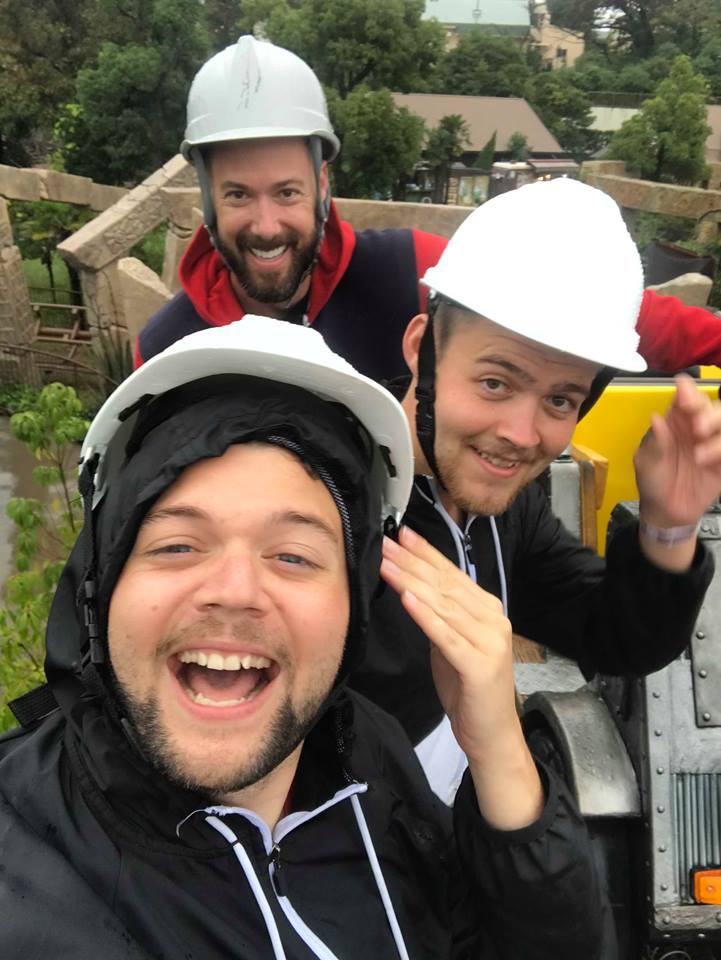 Adventure Drive did reopen about an hour later for guests, thanks to Suzuka’s extremely diligent team of operators and mechanics! Their other standard coaster, Rocky Coaster, has no tire drives and is therefore totally rain-proof! 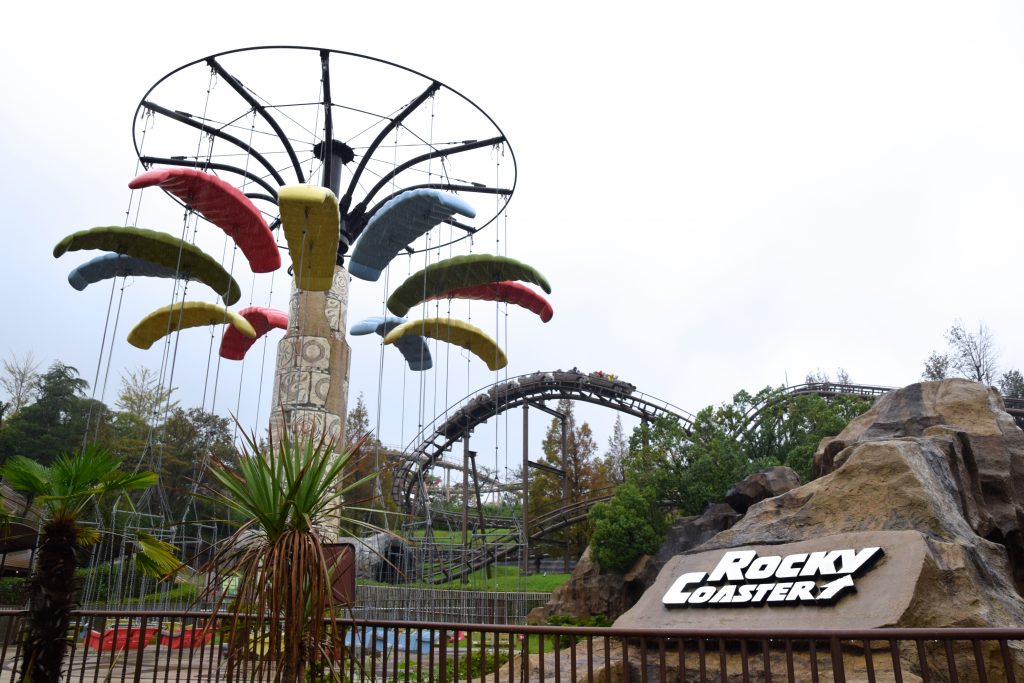 Rocky Coaster is a nice, straightforward non-looping coaster with an interesting quirk: trains with both forward and backward-facing seats! We only rode backward, but we certainly enjoyed the ride; it’s a lot more intense than it looks!

Suzuka Circuit (technically the theme park’s name is “Motopia”, and is part of the Suzuka Circuit race track’s entertainment complex) features an amazing of tracked transport rides of all shapes and sizes.

Though not *quite* a coaster, their steampunk flying insect-themed suspended monorail is an excellent journey over various other Suzuka attractions, including Adventure Drive. 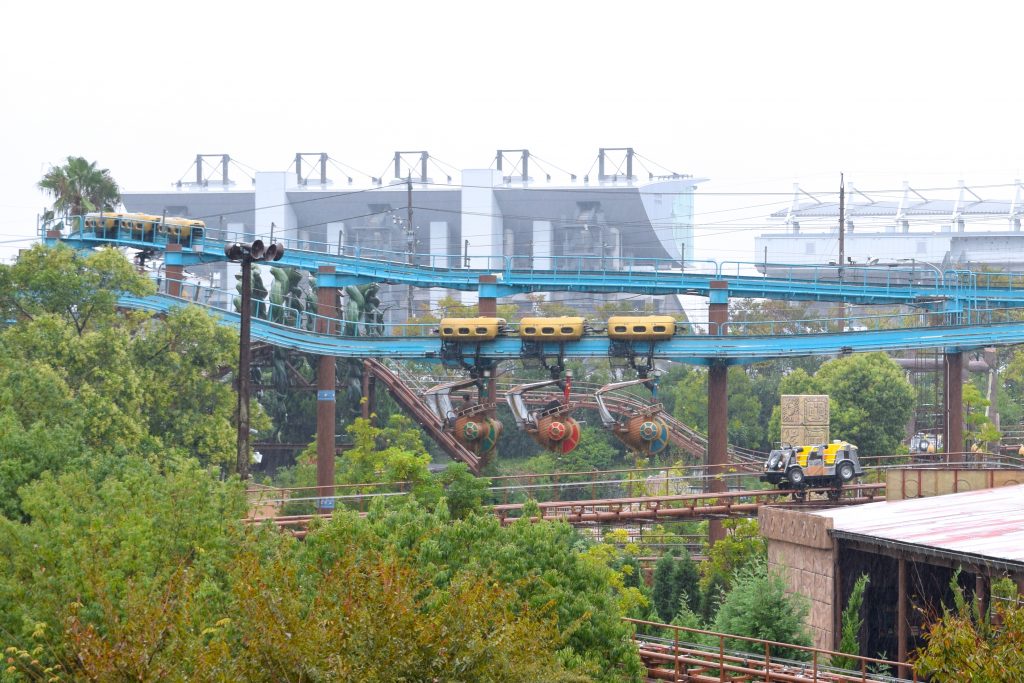 However, a few of the park’s tracked rides made quite the case to be counted as credits. 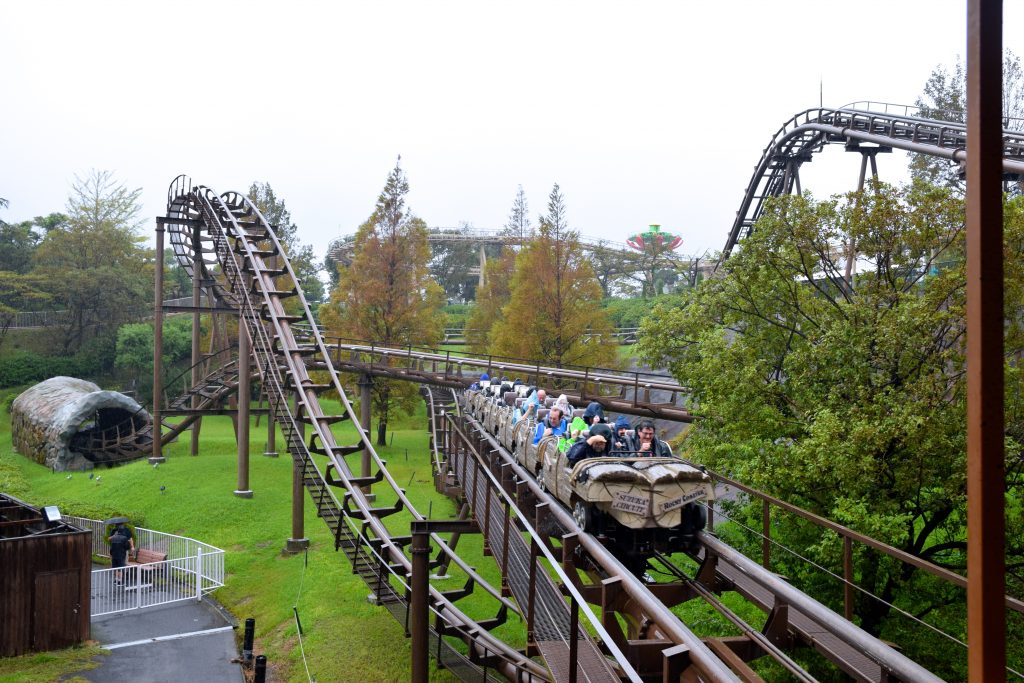 Duel GP, Suzuka Circuit’s latest attraction, is a one of a kind tracked racing attraction, where riders steer their own vehicles and attempt to beat their opponents by not spinning out on the turns (although spinning out is honestly more fun than winning the race anyway).

Individually motorized vehicles travel along parallel roller coaster-style tracks; a turn of the wheel in sync with the track will promote acceleration, but too much or too little will lead to teacup-style spinning as your car continues onward! Steady elevation, a launch, and three successive drops (complete with magnetic brakes) make up the ride’s sequence, which, to be honest, doesn’t feel that much more or less like a roller coaster than Blazing Fury at Dollywood.

Is it a credit? Maybe. Is it amazing and totally unique? Absolutely. Even for non-powered-coaster counters, it’s a tempting gray area attraction that begs for a place on every enthusiasts’ coaster count. 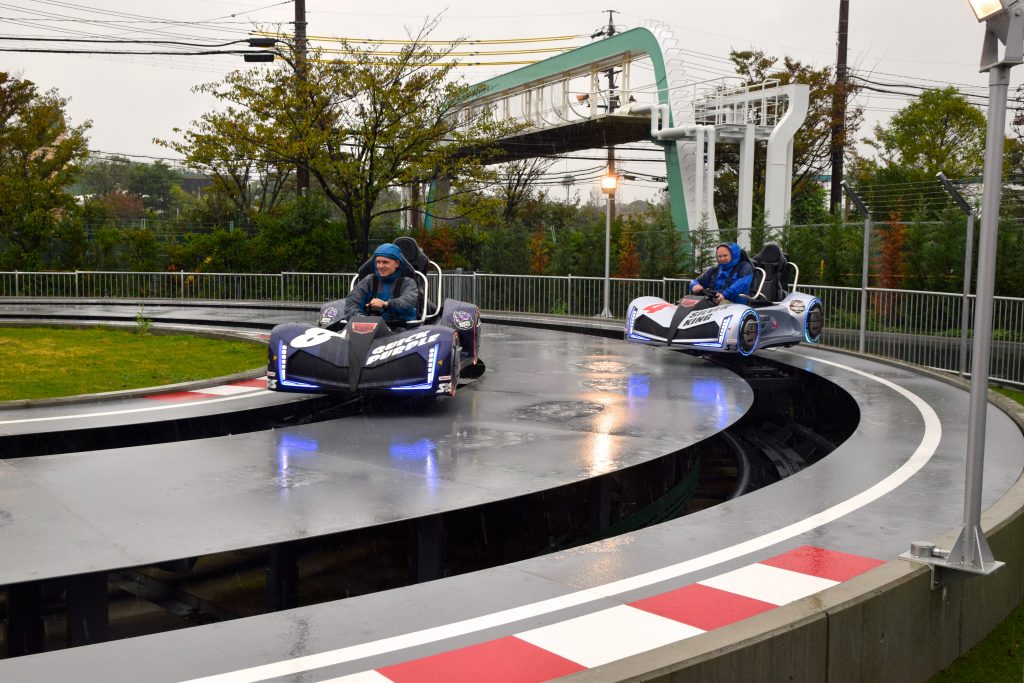 Next to Duel GP is the actual race track. Definitely too wet to race today!

A ride on the aforementioned suspended monorail allowed us to zero in on the progress being made toward getting Adventure Drive back open. 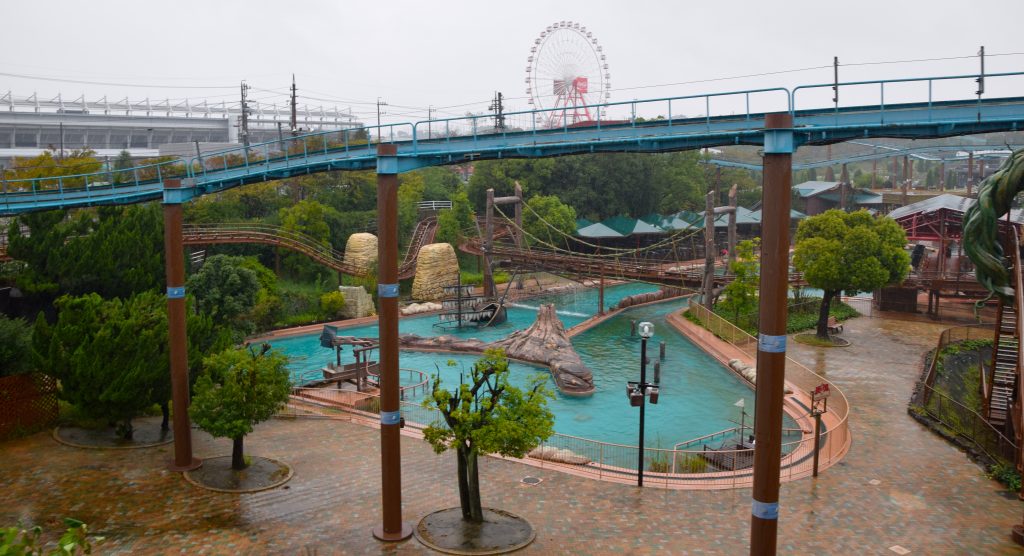 It’s testing! It’s testing! Aside from the excitement of being evac’d, Adventure Drive is an amazing multi-modal family coaster. It has two lifts, two launches, and lots of surprises! S U P P O S E D L Y screaming as loud as you can before the launches makes you go faster, but they still launch pretty fast even when the cars are empty.

Time for a snack and to dry ourselves off for a moment. Hooray for a blue soda slushie parfait! 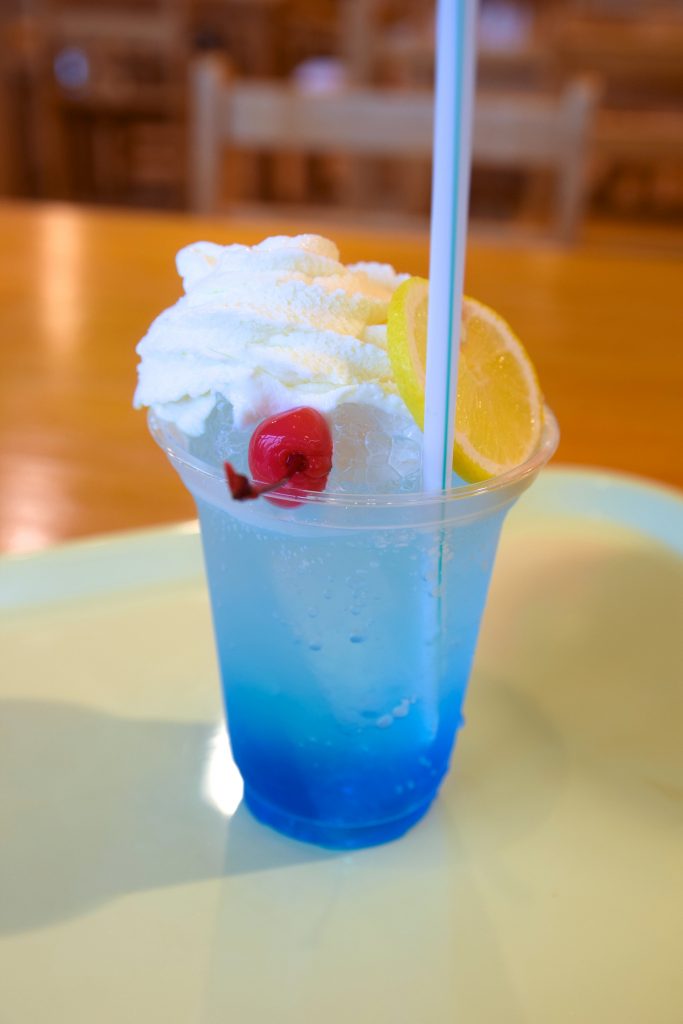 And for some REALLY excellent pancakes! Japan LOVES pancakes! 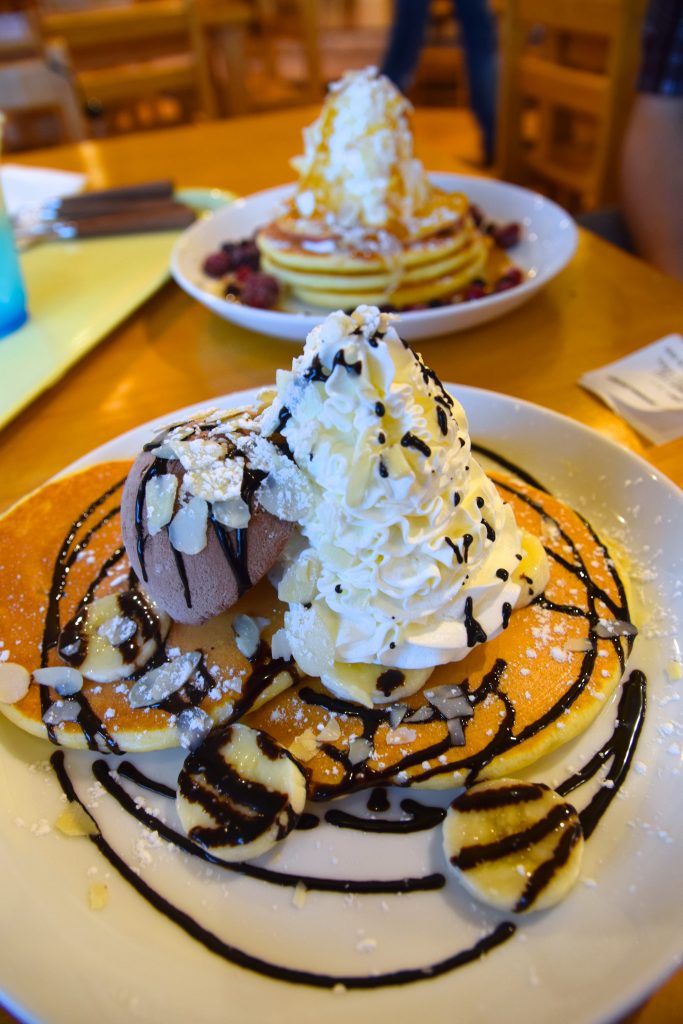 As if Adventure Drive and Duel GP didn’t already have us busting with delight, the show-stopping Den Den Mushi coaster just about did us in (I have a lot of confidence in calling it “coaster” because of that nice little bunny hop down there on the bottom left. You see it? Where my “it’s not a coaster if it doesn’t coast up hill” peeps at! This thing is definitively a coaster)!

Hop aboard a snail-shaped chariot for a slow-moving journey (except for the drop/bunny hop, where gravity completely takes over), wherein Den Den the Snail TELLS YOU A STORY as you explore the garden! I don’t understand a word of Japanese, but damn is this ride cute. 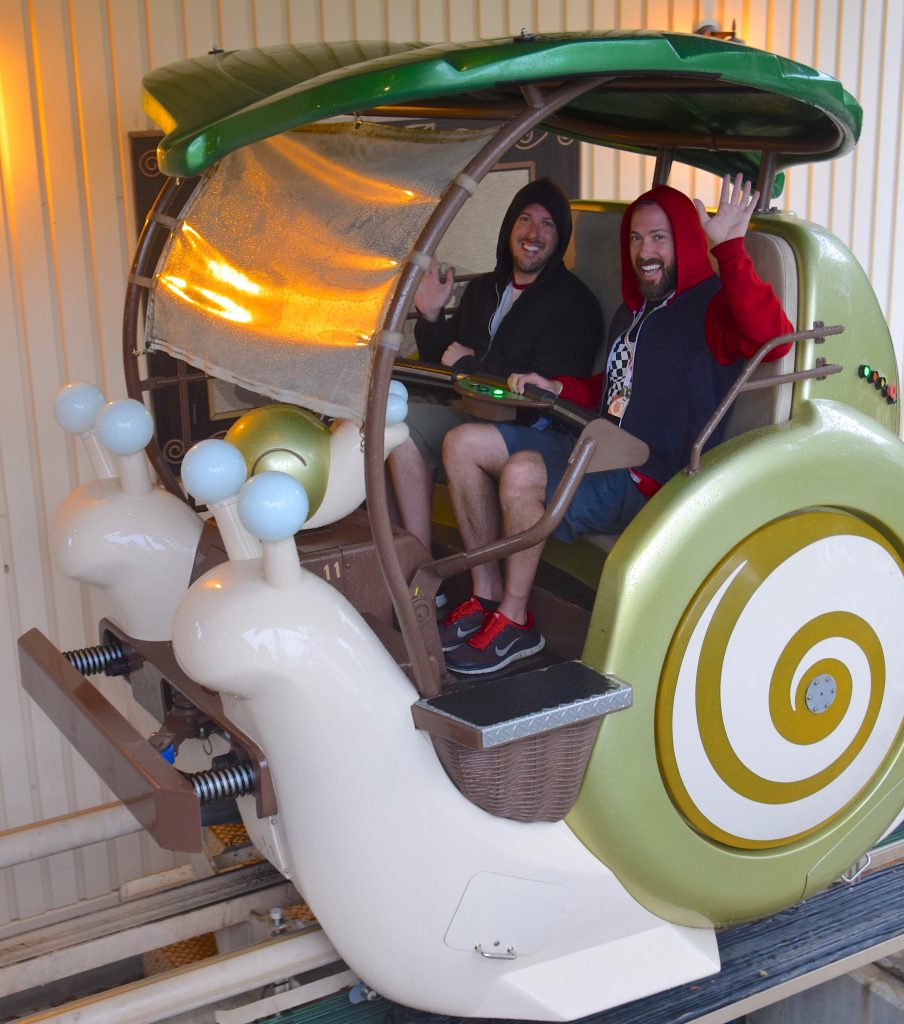 And that’s a wrap! Time to head back to the bus and wring out my socks. Tonight we prep for the arrival of Typhoon Trami!

Thank you for checking out this new report of our Asia adventures! Check out these other Asia reports we’ve launched: