This article aligns with our special podcast episode! Click the logo below to listen to the podcast!

Like most of the United States, Northern California had a boom of amusement parks during the late 19th and early 20th century.  The combination of two world wars and the Great Depression resulted in the closure of most of these parks.  By the 1960s only The Santa Cruz Beach Boardwalk could claim to a major roller coaster.  The Disneyland theme park boom found its way to the area early including the opening of Scotts Valley’s Santa’s Village in 1958, San Jose’s Frontier Village in 1961, and Redwood City’s Marine World in 1968.  Through those years not a single roller coaster rose to challenge The Boardwalk’s Giant Dipper as the only major coaster in Northern California. 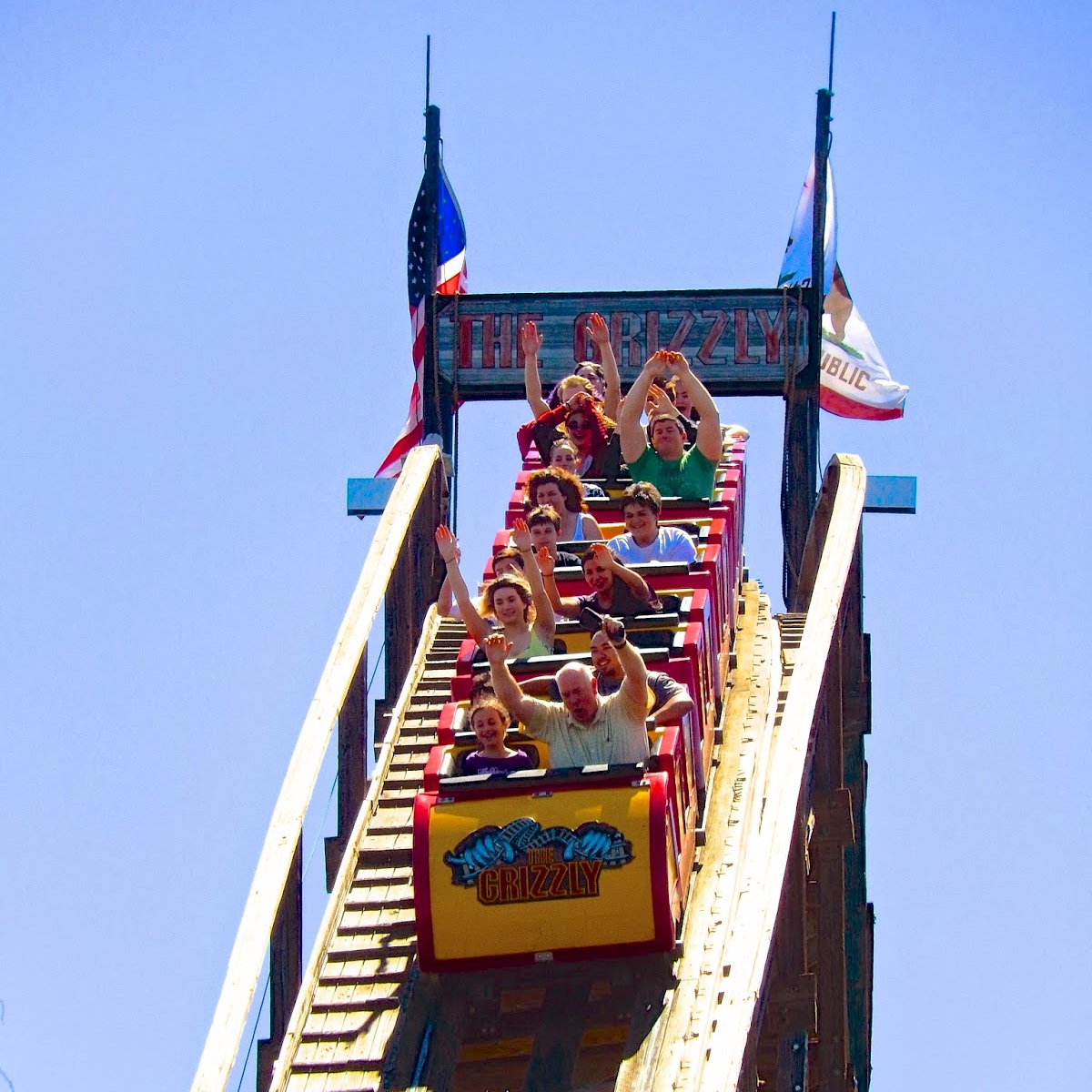 In 1972 Kings Island opened the Racer ushering in a new era for major roller coasters.  The Southern California parks responded to this with two of the earliest inverting coasters Knott’s Berry Farm’s Corkscrew in 1974 and Magic Mountain’s Revolution in 1975.  Now any major theme park seems incomplete without a major thrill-coaster.  Taking note of this growing trend Marriott incorporated a large scale steel coaster into the designs for their two Great America parks.  Opening with the Santa Clara park in 1976, Turn of the Century would combine the thrills of classic wooden coasters with the state-of-the-art inverting looping steel coasters and give Northern California its first new large-scale coaster in over 50 years.  Unlike it’s Southern California counterparts Great America didn’t face much competition in thrill rides for over 20 years.  Frontier Village tried by adding an early powered coaster called Apache Whirlwind but, falling victim to Great America and rising property values, closed in 1980. Despite the lack of competition Marriott, Kings Entertainment Company, and eventually Paramount continued to invest in the park.  Great America was at the forefront of many coaster trends.  It featured one of the earliest launched coasters with Tidal Wave(1977), one of the earliest coasters with four inversions with Demon(1980), a dishonorable product of the wooden coaster craze of the 80s with Grizzly(1986), the second B&M coaster ever constructed with Vortex(1991), and the world’s second inverted coaster Top Gun(1993). 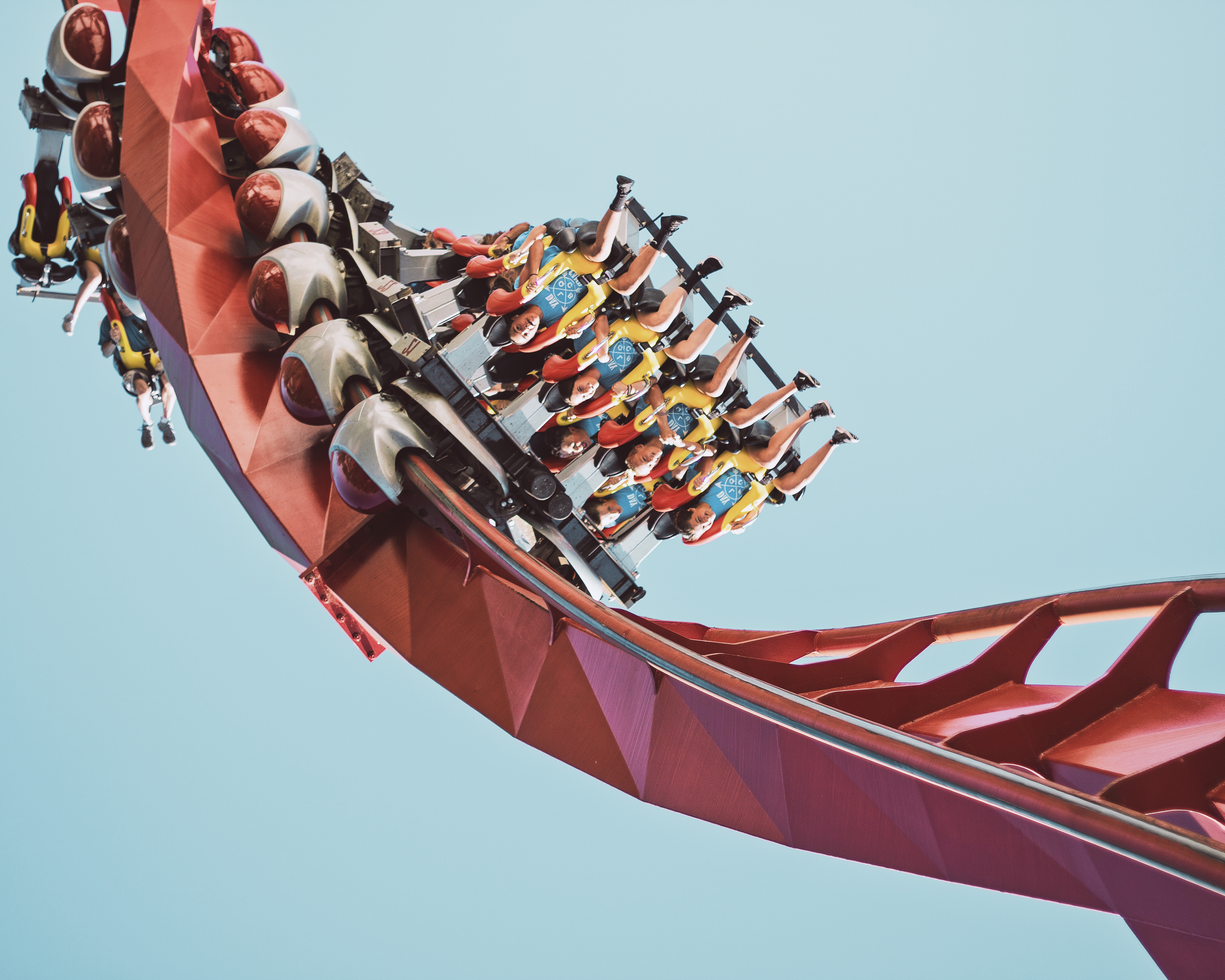 Marine World, which had evolved to Marine World/Africa USA, moved an hour north from Redwood City to Vallejo in 1986.  While its focus continued to be on animal shows and attractions it’s management was turned over to Premier Parks in 1997 resulting in its transformation to Six Flags Marine World in 1998. Six Flags quickly went to work transforming the park into a full fledged theme park.  1998 saw the addition of Boomerang Coast to Coaster, a standard Vekoma Boomerang, and Kong a Vekoma SLC relocated from Opryland, USA. For the first time in a long time Great America’s dominance in Northern California was being challenged.  That same year Great America opened Invertigo the first Vekoma Invertigo in the U.S.  Continuing with the trend of rapid expansion Six Flags added the GCI Roar in 1999.  In 2000 both parks unveiled cutting edge roller coasters.  Great America opened Stealth, a prototype Vekoma flying coaster, and Marine World opened Medusa, a large-scale B&M floorless which remains the tallest and longest coaster in Northern California.  Around the same time a small picnic ground 40 minutes south of Great America in Gilroy was being redeveloped into a family theme park. Bonfante Gardens, now Gilroy Gardens, opened in 2001 with two family coasters including a large-scale custom mine-train by Morgan. With Great America and Marine World going head to head and a new park in development the new millennium seemed to signal a new era for coasters in the region. It seemed that the stage was set for a great bit of inter-park rivalry, the likes of which have led to some of the best coasters in the world. 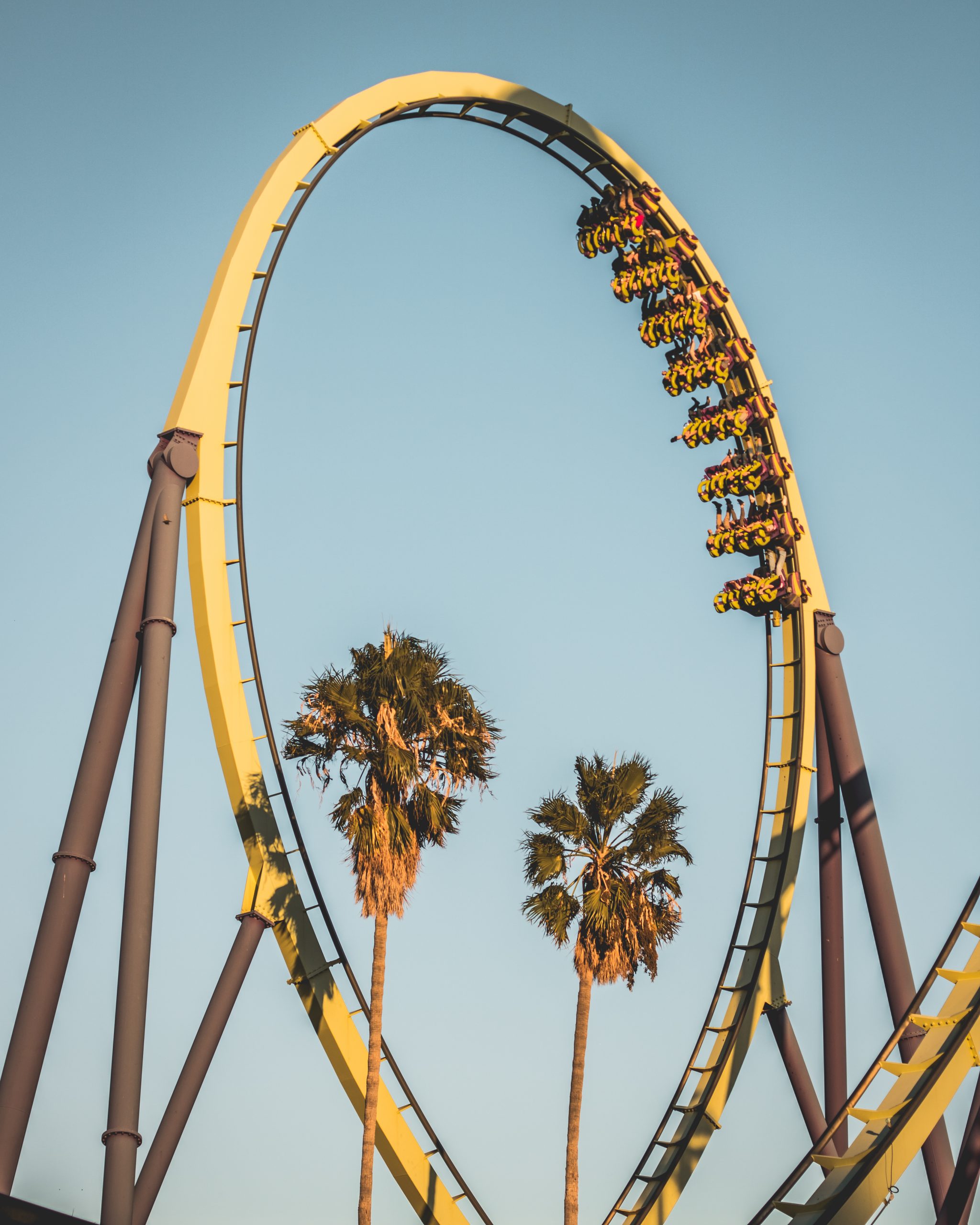 No such coaster boom happened.  Stealth was an unreliable prototype with a limited capacity and a ride experience that received mixed reviews.  It did not provide the attendance gains Paramount Parks expected and would only last for three seasons before being replaced with a small waterpark expansion.  From that point forward it was clear that Paramount didn’t see Great America as a major thrill destination and spent their remaining years of management adding family and small-scale flat ride attractions including the Arrow Wild Mouse Psycho Mouse in 2001.  In 2003 Paramount Parks took over management of Bonfante Gardens removing any motivation for competition between these two Santa Clara county parks. Six Flags initially fared a little better.  Medusa became an instant classic and catapulted Marine World to a thrill destination adding Vertical Velocity in 2001 and the short lived Zonga in 2003.  Six Flags top line up, Medusa, Vertical Velocity, and Roar simply surpassed Great America’s who only had two standout modern coasters, 1993’s Top Gun and 1998’s Invertigo. With their place in the market solidified Six Flags quickly slowed down coaster additions. Six Flags’ financial problems and Paramount Parks’ growing disinterest led to a period of stagnation in the region.  Between 2004 and 2012 the only large-scale coaster addition in Northern California was Tony Hawk’s Big Spin, a Gerstlauer spinning coaster which opened at the renamed Six Flags Discovery Kingdom in 2008. 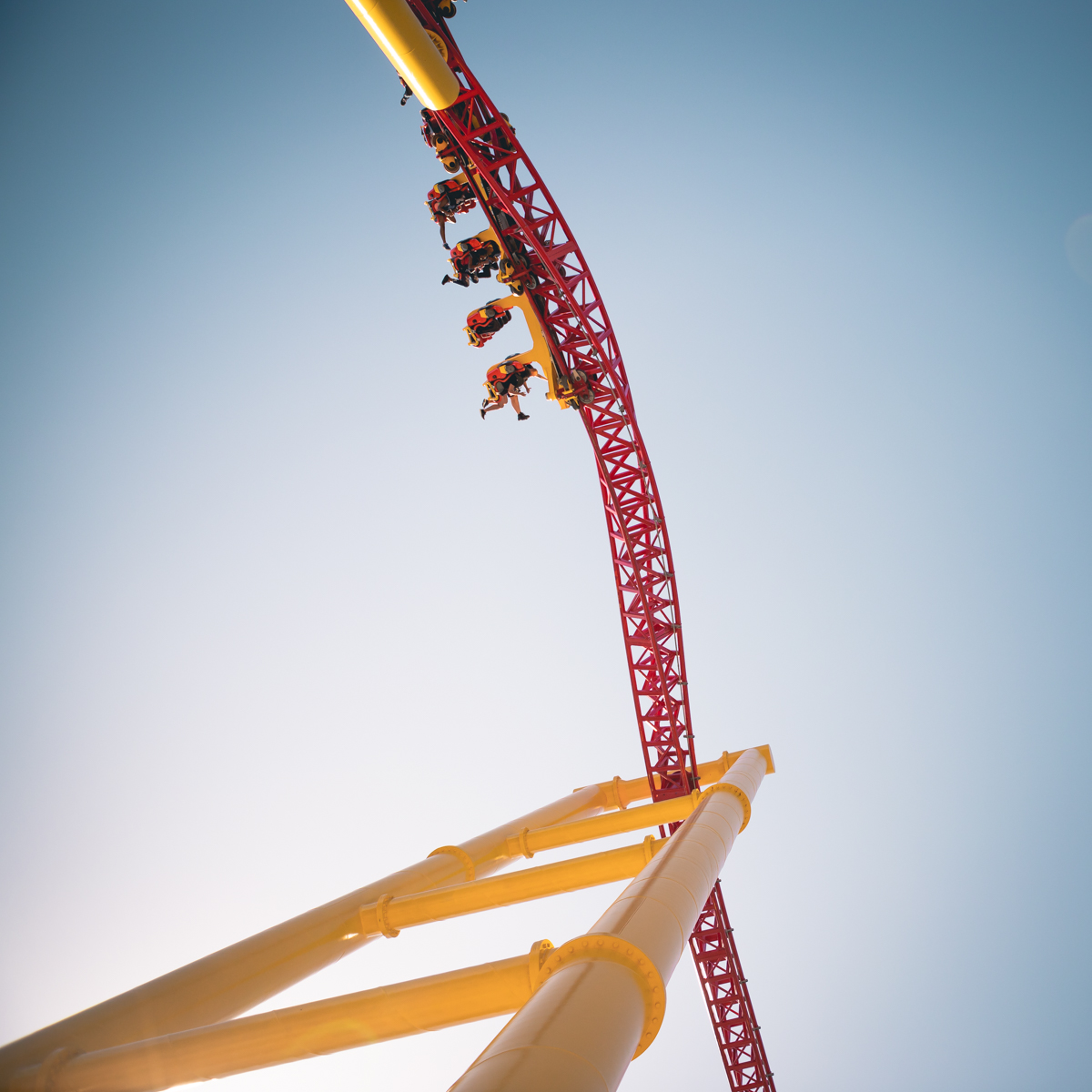 When Great America was acquired by Cedar Fair in 2006 fans were hopeful that this now neglected park would receive some attention and finally give Six Flags some much needed competition.  In 2012 Six Flags added their first major thrill coaster in almost 10 years when they introduced Superman Ultimate Flight, the first Premier Rides Sky Rocket II.  In 2013, 12 years after Psycho Mouse was built, Great America introduced the highly regarded GCI Goldstriker. The construction of these two coasters marks the beginning of a new era for Northern California.  Even The Santa Cruz Beach Boardwalk got into the fray with their 2013 Mauer spinning coaster, Undertow.  While not an exactly clear timeline Great America and Discovery Kingdom have continued to go tit-for-tat in coaster additions following 2013.   In 2016 Discovery Kingdom converted Roar into the RMC Joker, in 2017 Great America converted their B&M standup Vortex into the sit down Patriot, and in 2018 the parks went head to head with single rail concepts with Great America’s Railblazer and Discovery Kingdom’s problematic Harley Quinn Crazy Coaster.   With attendance remaining relatively stagnant at both parks and Covid-19 resulting in the loss of an entire season it is unclear if this trend of expansion will continue.  It is likely that Six Flags’s Batman the Ride (2019) will mark the beginning of another coaster drought in the region. 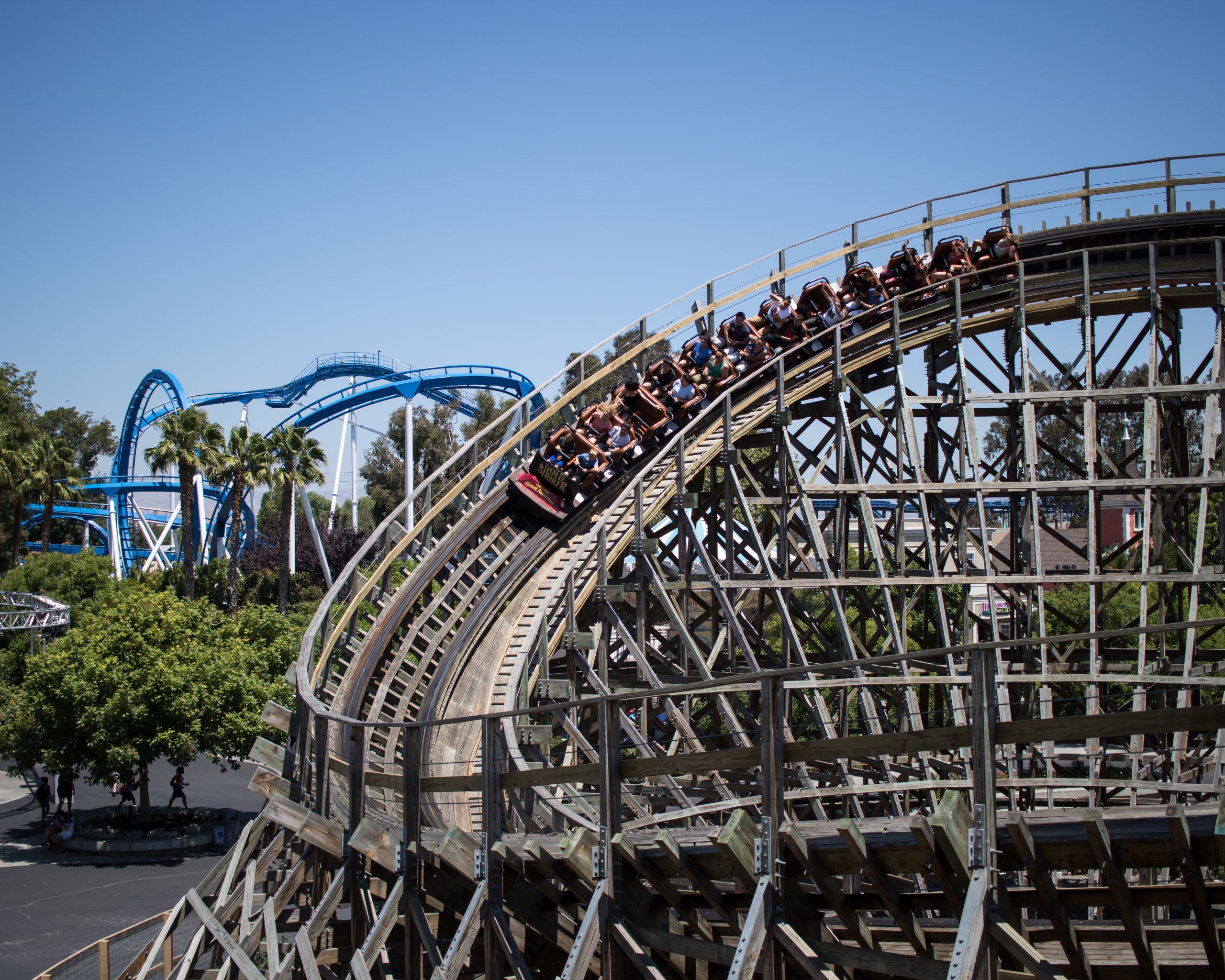 Over the past 10 years Northern California has gone from roller coaster backwoods to competitive coaster destination.  It is home to what many argue is the best GCI wooden coaster, the best B&M floorless, two crowd pleasing RMCs, and continues to be home to one of the oldest coasters in the world.  California’s Great America and Six Flags Discovery Kingdom have become some of the stronger regional parks in the country, The Santa Cruz Beach Boardwalk continues to offer one of the best seaside park experiences in the world, and Gilroy Gardens brings a uniquely European-style park experience to the U.S..  When Marriott opened Great America in 1976 they operated the Santa Clara park with year-round hours following the theme parks of Southern California and Florida. This didn’t prove profitable and they quickly switched to seasonal operations. With San Francisco remaining one of the most popular tourist destinations in the country the promise of Northern California being a major theme park destination has always seemed in sight.  In recent years both Discovery Kingdom and Great America have introduced Christmas events to expand their operating calendars. Only time will tell if that promise of Northern California as major theme park destination will finally be fulfilled.

Where do you think Northern California fits in the coaster landscape of America?  What do you think the future holds for this often-overlooked region?