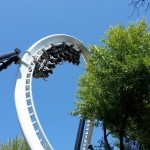 I was lucky to have a free day today, and the park was actually open this Friday for Labor Day weekend. So, guess where I went. Magic Mountain. It was actually a bit busier than I expected with a couple of lines throughout the park. But I still got some rides in on Twisted Colossus. In this update we’ll look at what’s already changed from yesterday’s national Six Flags announcements, some Fright Fest, and regular other changes around the park!

Ahh. It’s good to be back, I don’t go an awful lot during the summer, because heat and crowds are not my friends. So going on empty-ish Fridays, is very enjoyable. First thing I noticed upon parking… maintenance was replacing lights of the TC Floodlights. Maybe they’ll be turned on again sometime soon. My closer shot was accidentally super blurry as I was sprinting to catch that bus over there. 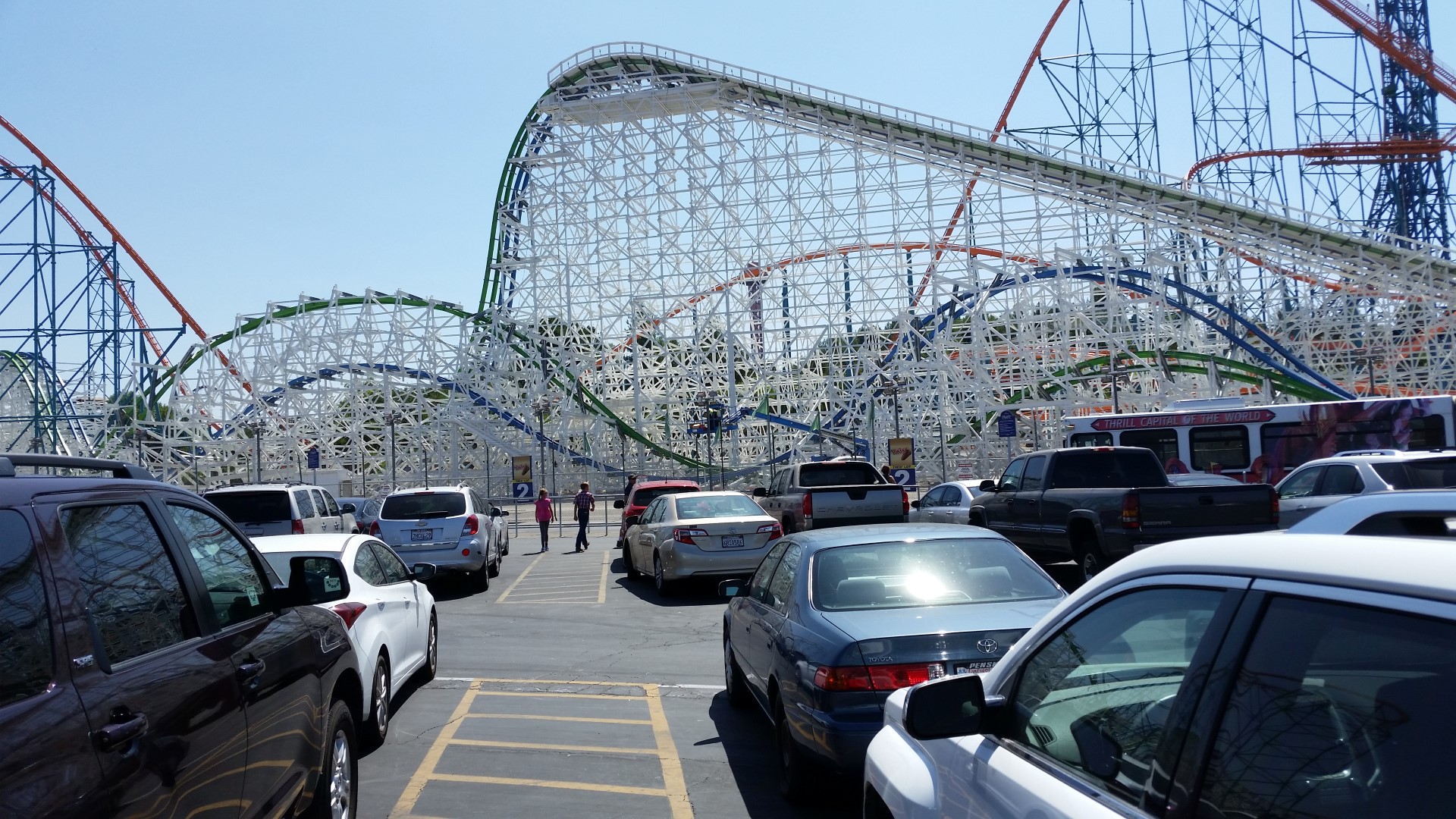 Upon arrival at the main gate, the wonderful new banners were placed after yesterday’s announcement. The New Revolution will open Summer 2016. Get hyped! For all the juicy NEW REVOLUTION DETAILS, click here. (There’s another link at the end of the post in case you want to continue reading). 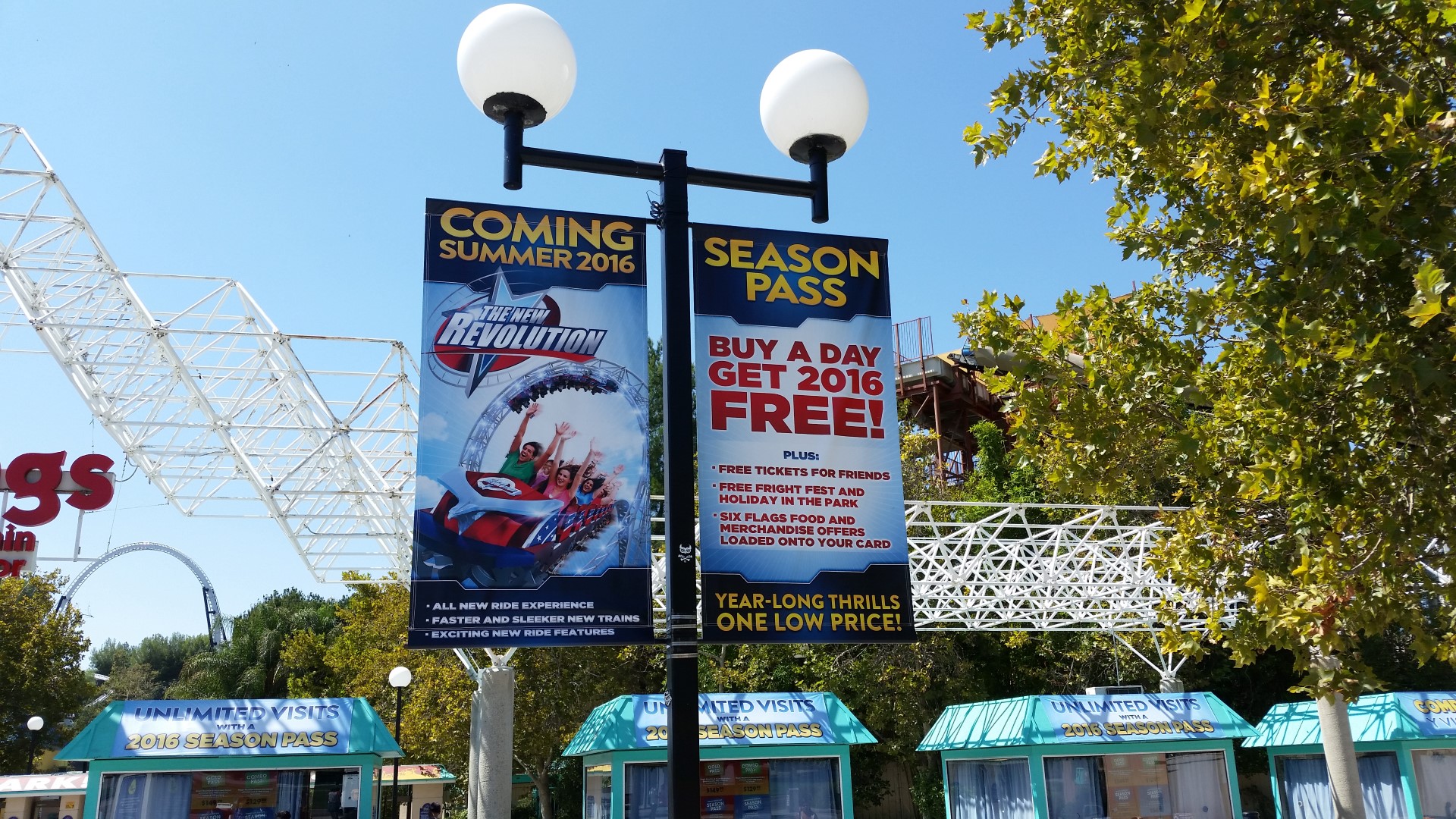 The banners on top of the ticket booths have been replaced as well as the park is now selling 2016 season passes! 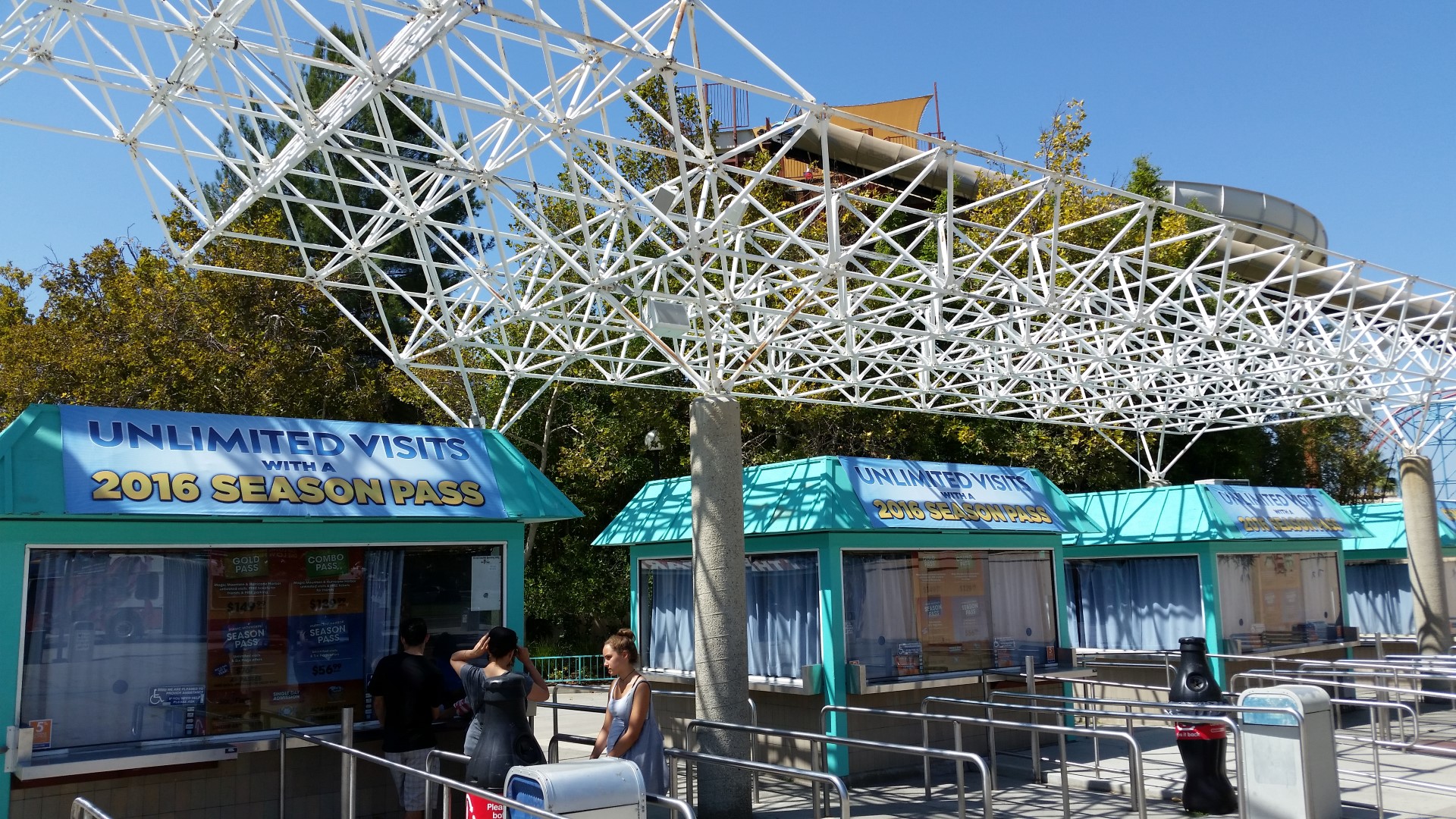 The park also launched the Gold Season Dining Pass, which allows for a snack, lunch, and dinner each visit. It also includes a free all-year unlimited-refills souvenir bottle, and is VALID AT ALL SIX FLAGS PARKS. – They’re advertising it seriously everywhere around the park. I must have seen at least 20 of them. 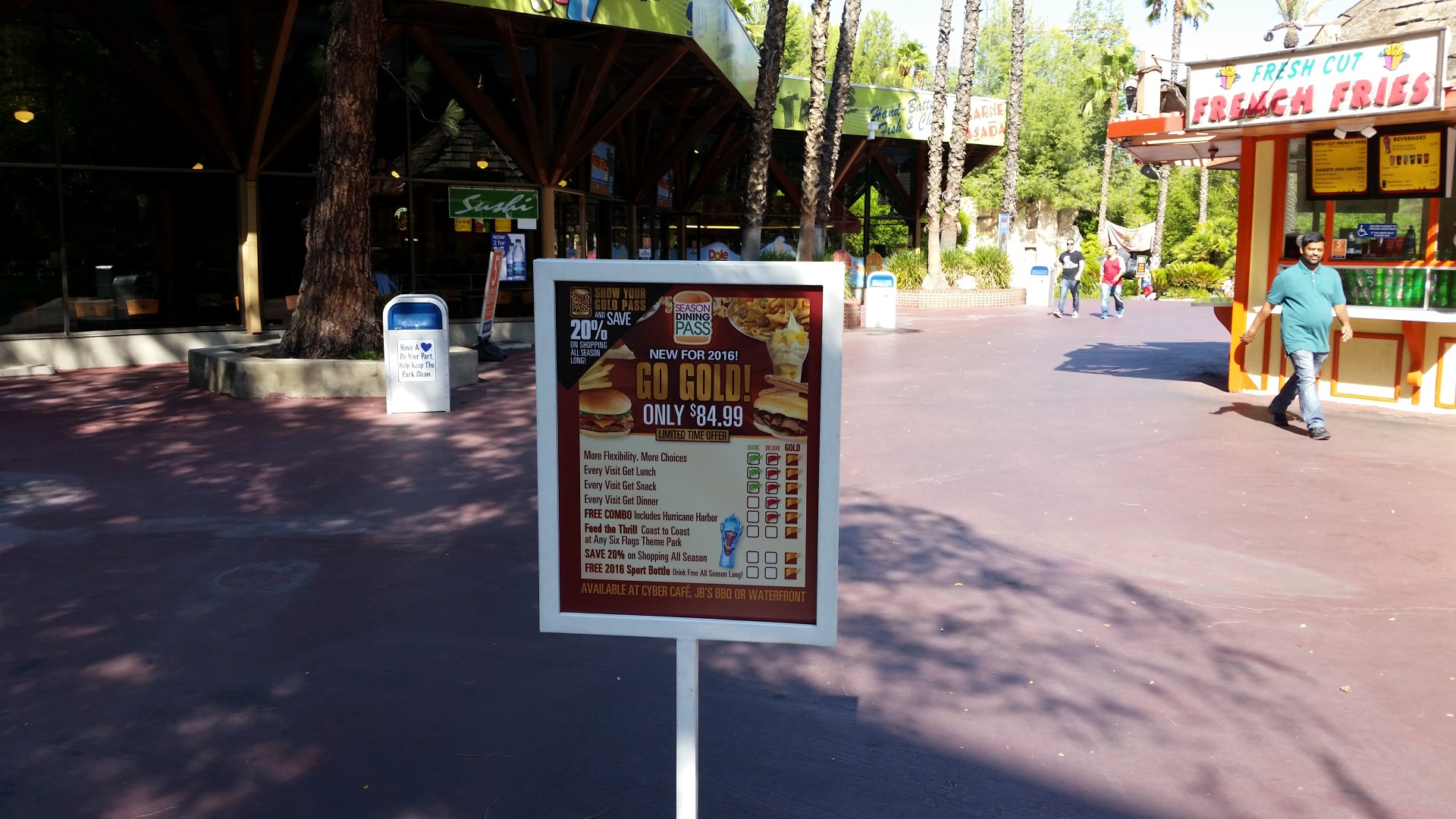 Let’s look at some Fright Fest. This was the first week where the park wasn’t open every day. So there’s a start… there’s still not too much going on though. On the top of the hill, Samurai Summit, lights have been placed around the area. 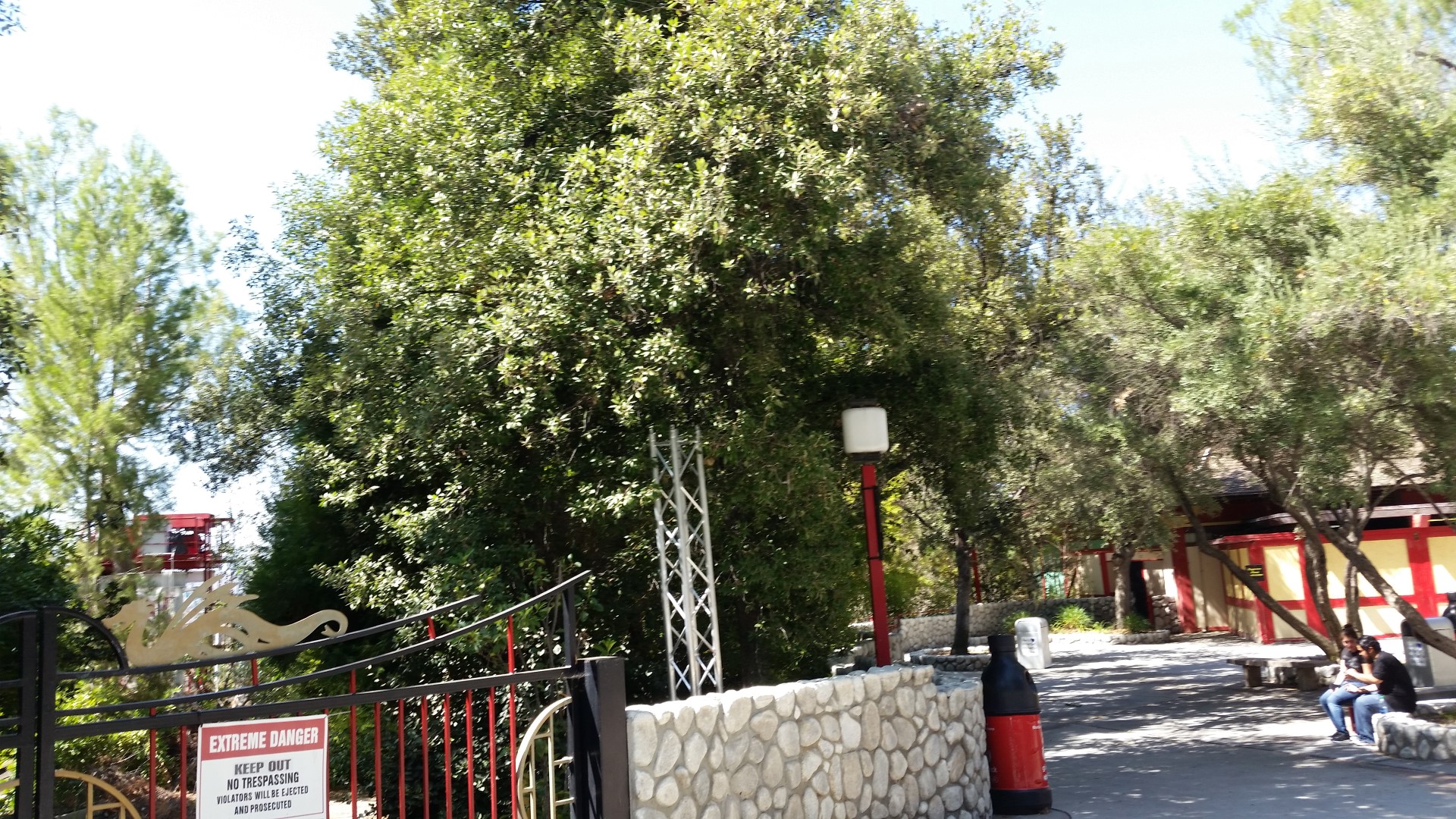 This wonderful pagoda will house the Garden of Darkness again this year. 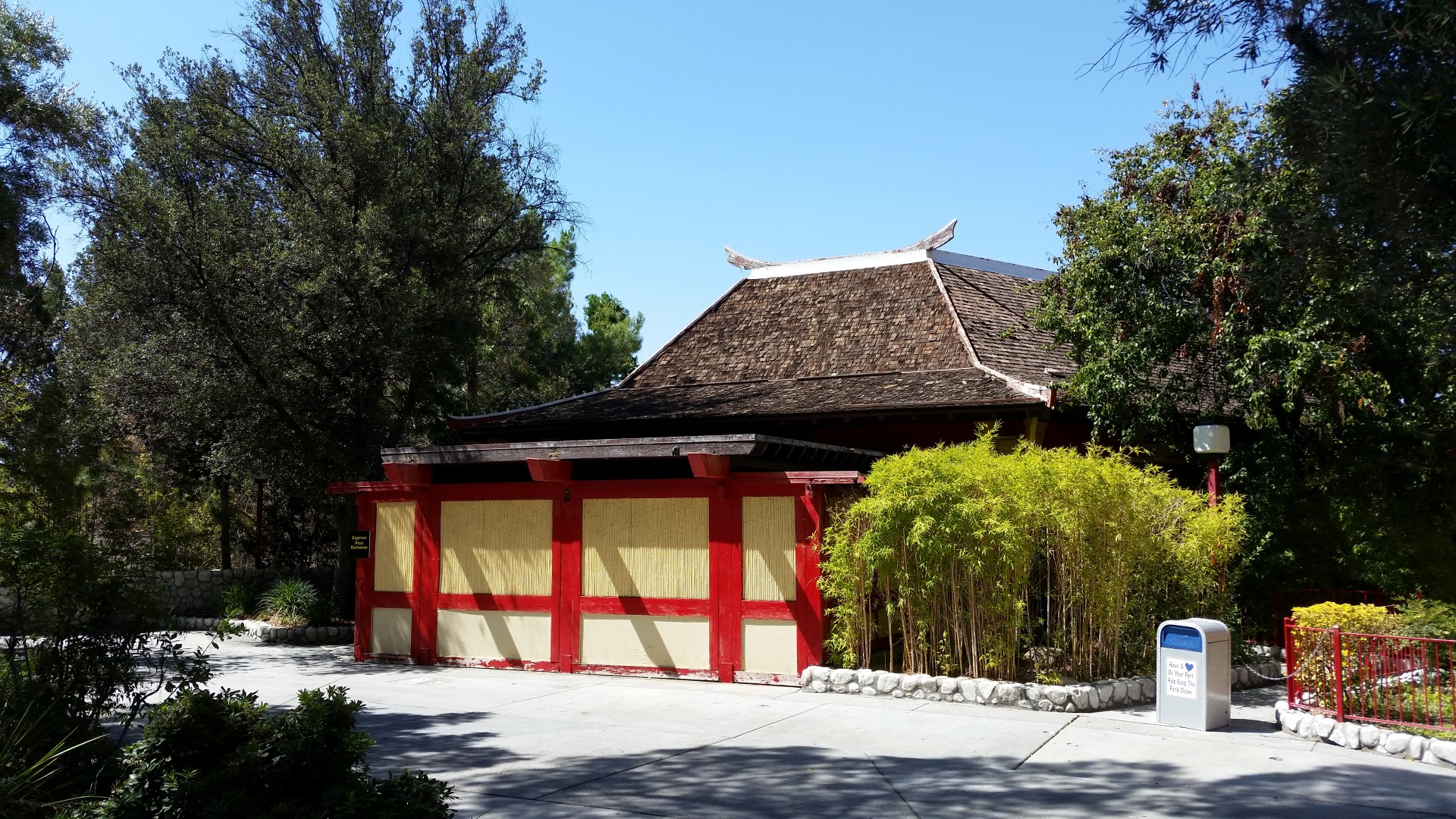 Over at the Aftermath, I couldn’t get a picture, but there’s a bunch of electrical work going on inside the maze. 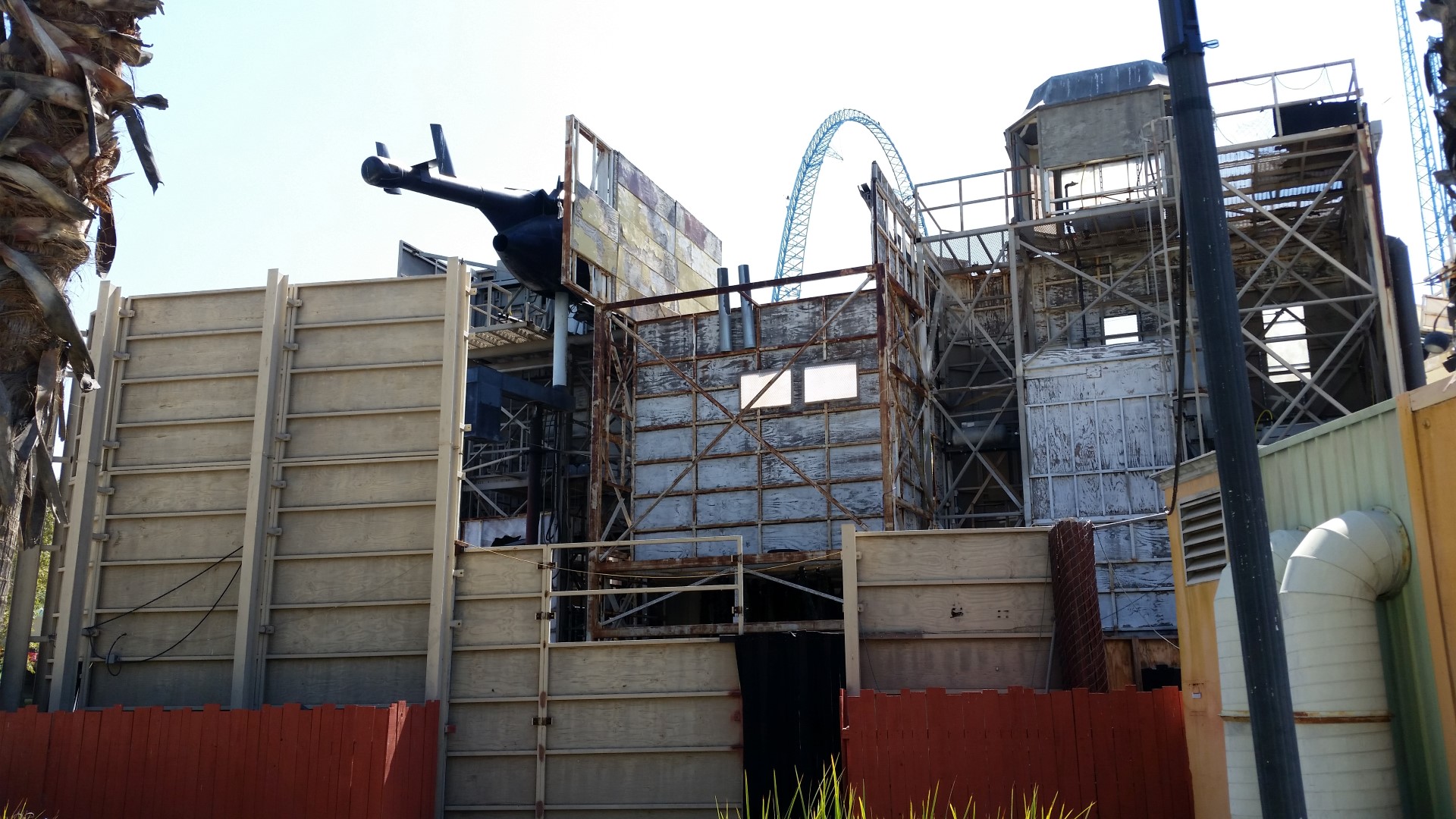 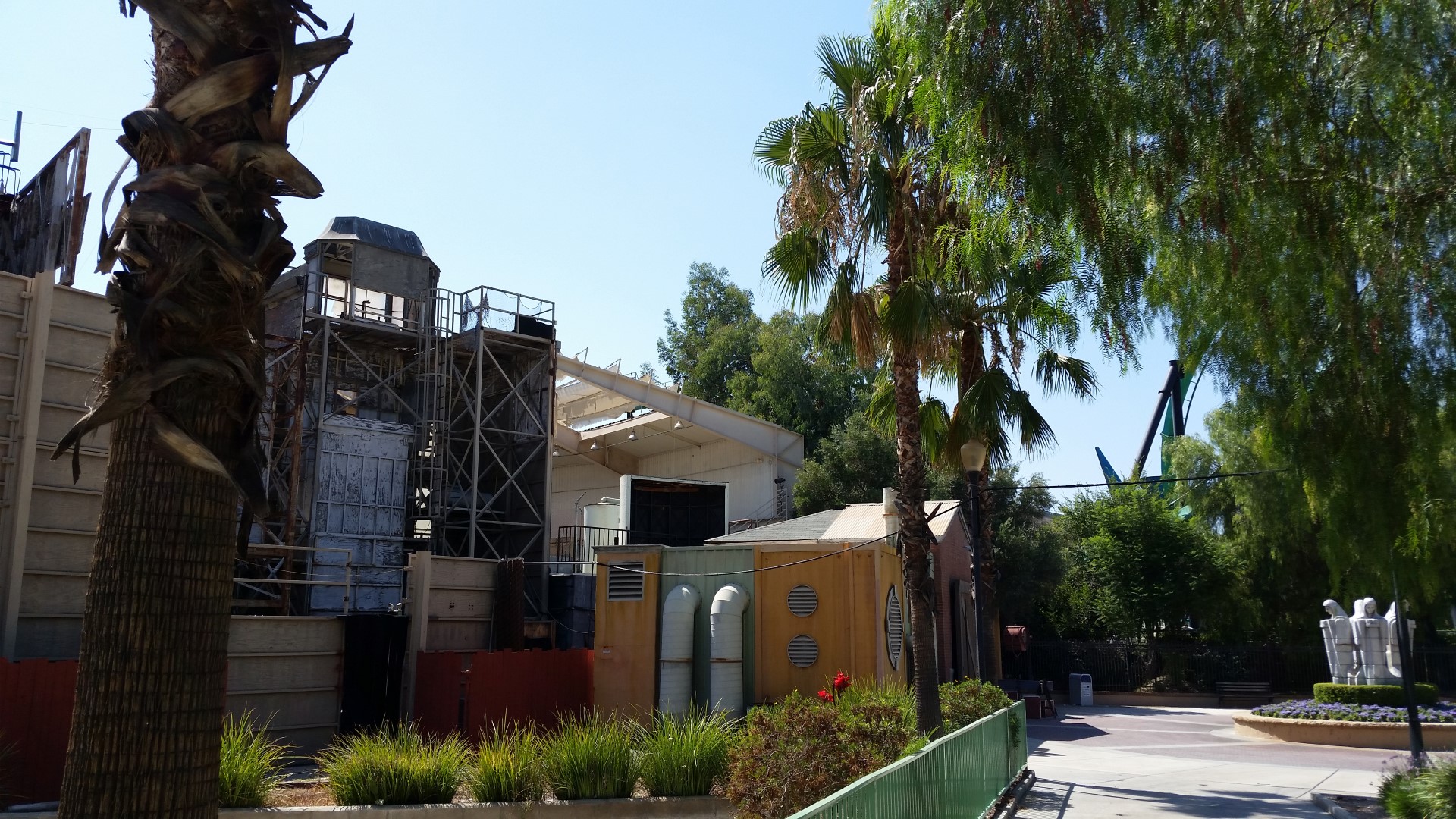 At the Screampunk District, which will be Territory Twisted for Fright Fest there are some more light structures being placed. 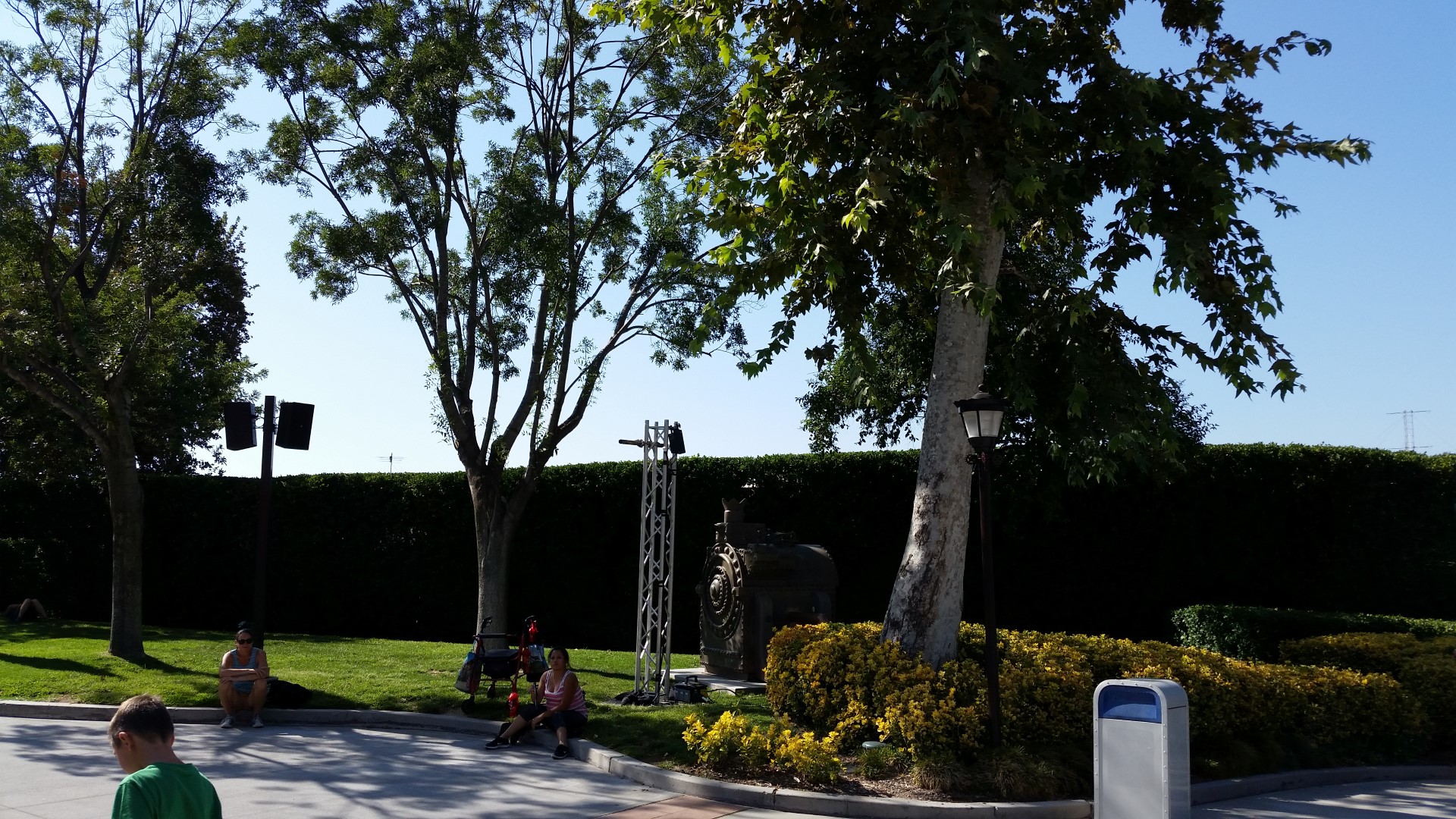 Look at the landscaping by the way, really like the overall look of this area. Really do. 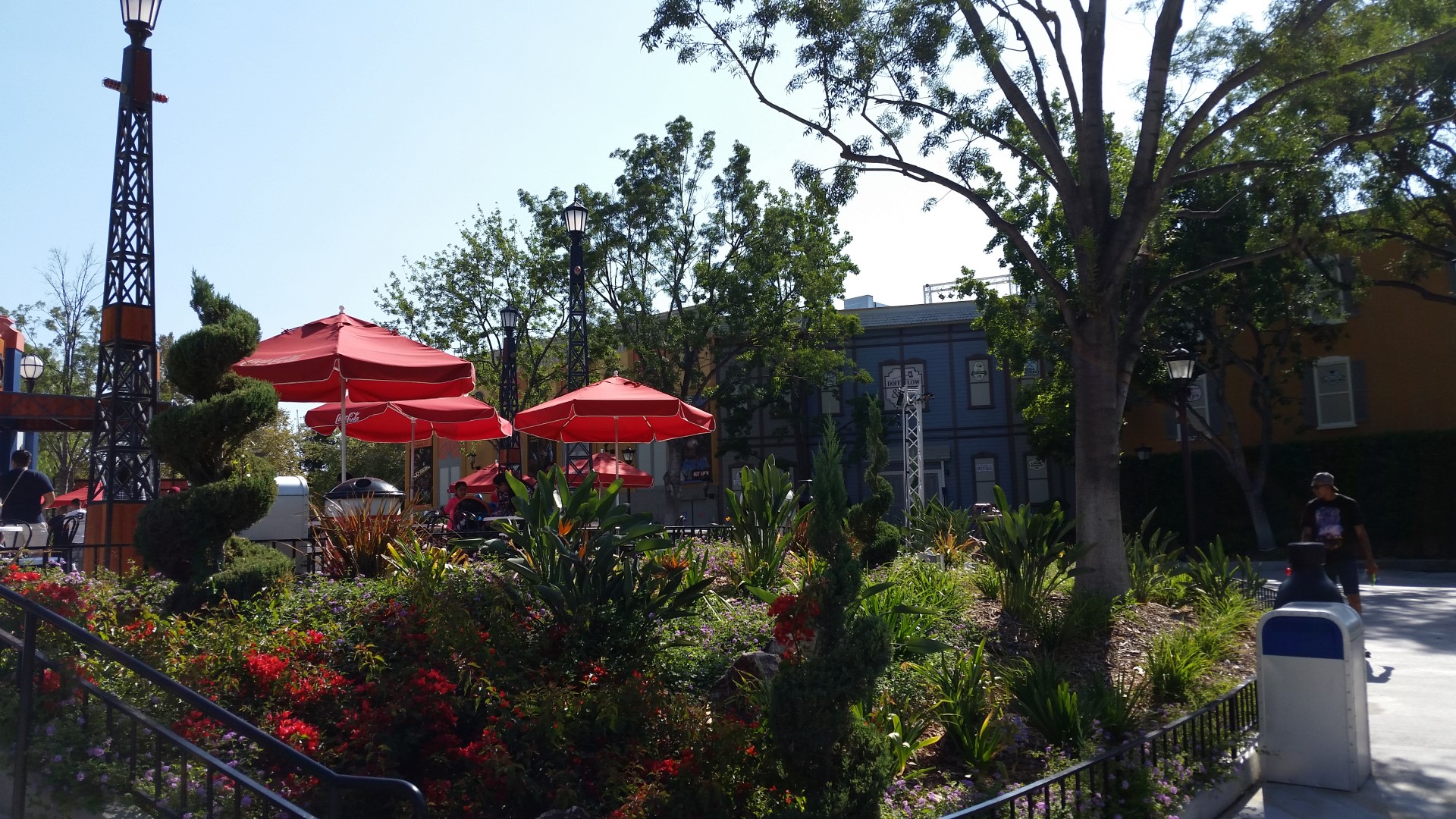 I’m not sure if this is Fright Fest related, but a tiny stage can be found over at Revolution. Now I think about it, Revolution closes on Monday, this may be there for some sort of small party on Monday. Six Flags tends to kick small parties with DJ’s for these kind of events. 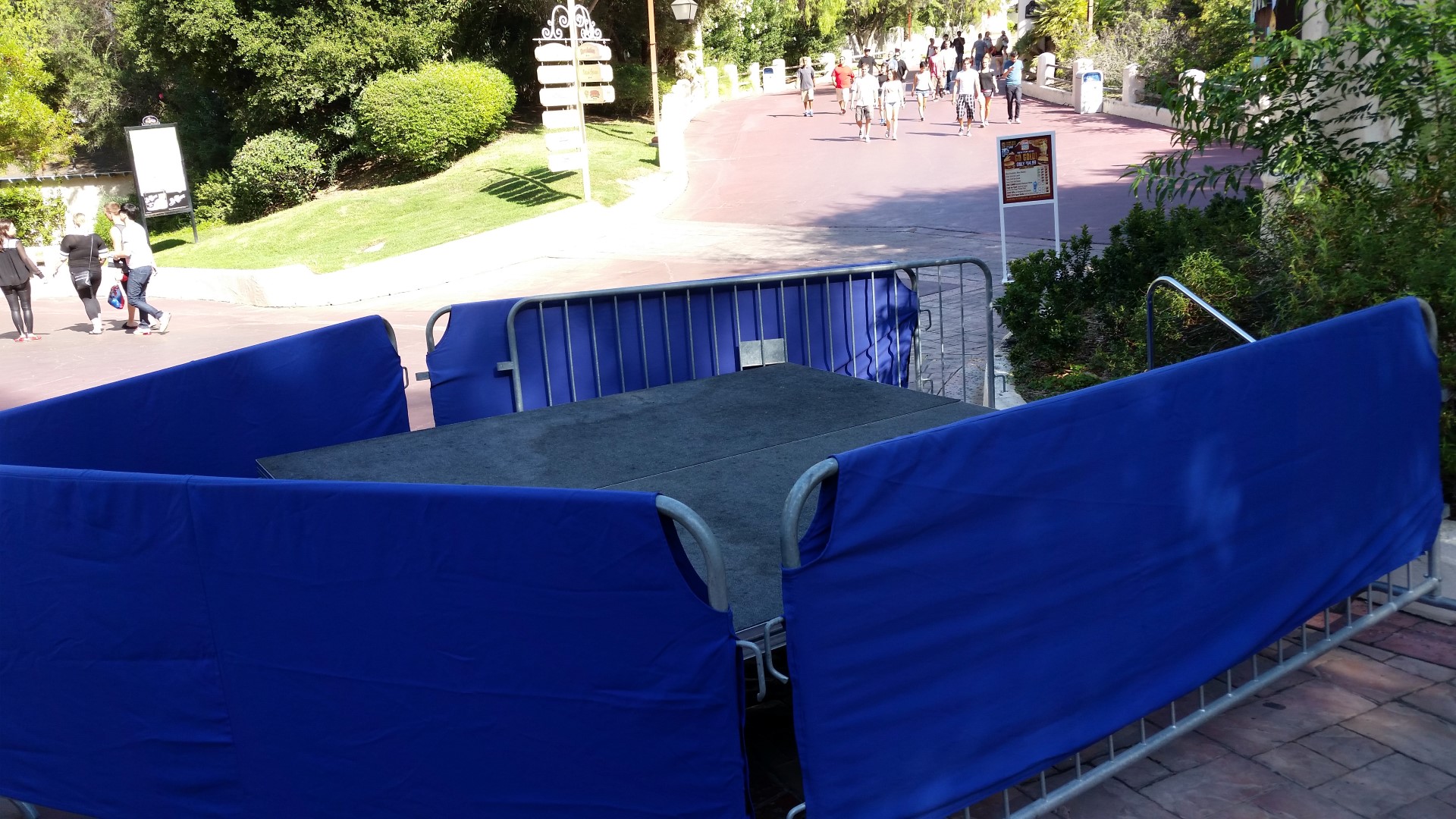 Actually Fright Fest related, the Wastelands Scare Zone, a.k.a the Movie District has installed show lights and put pumpkin covers over the streetlights. 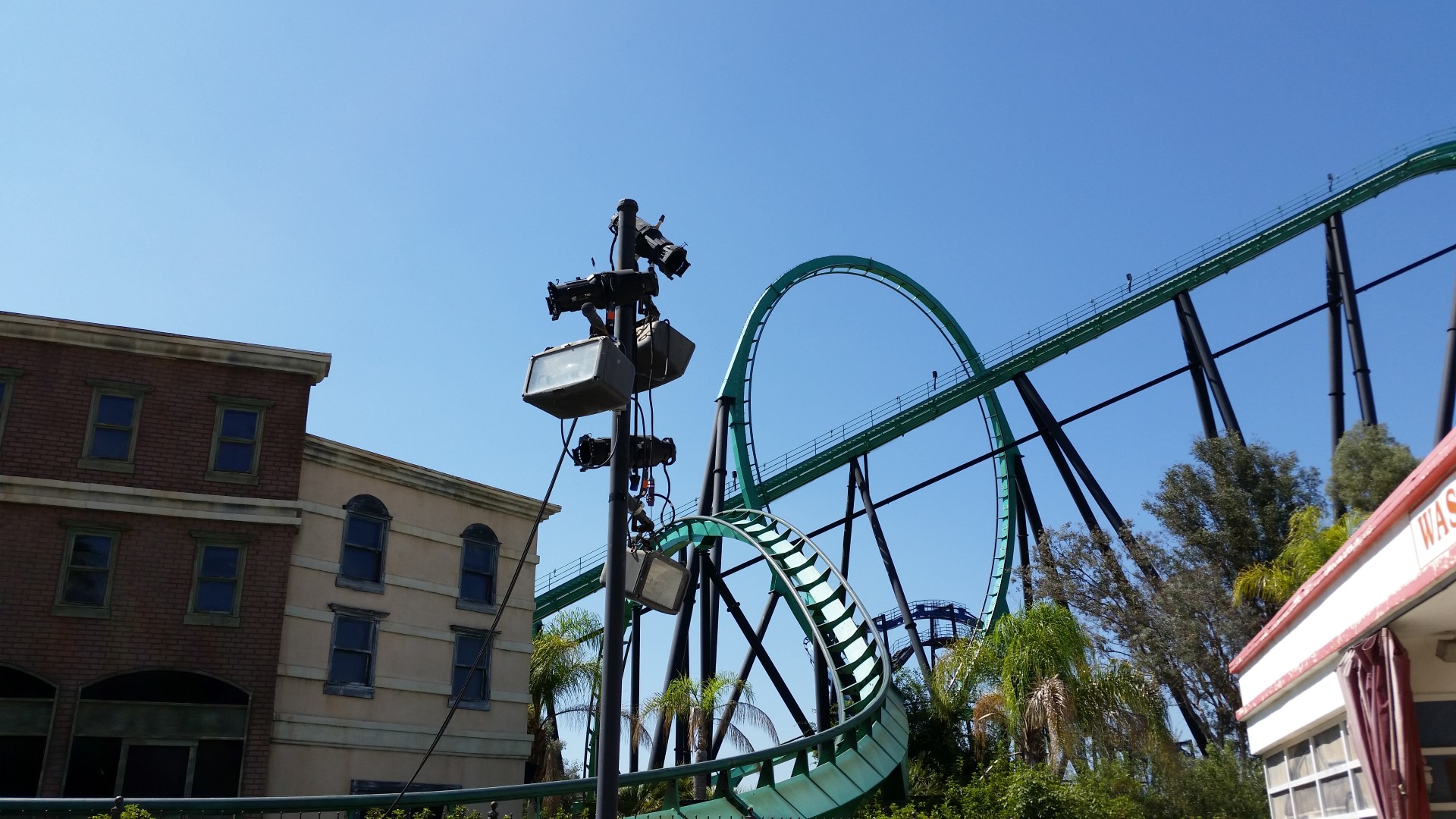 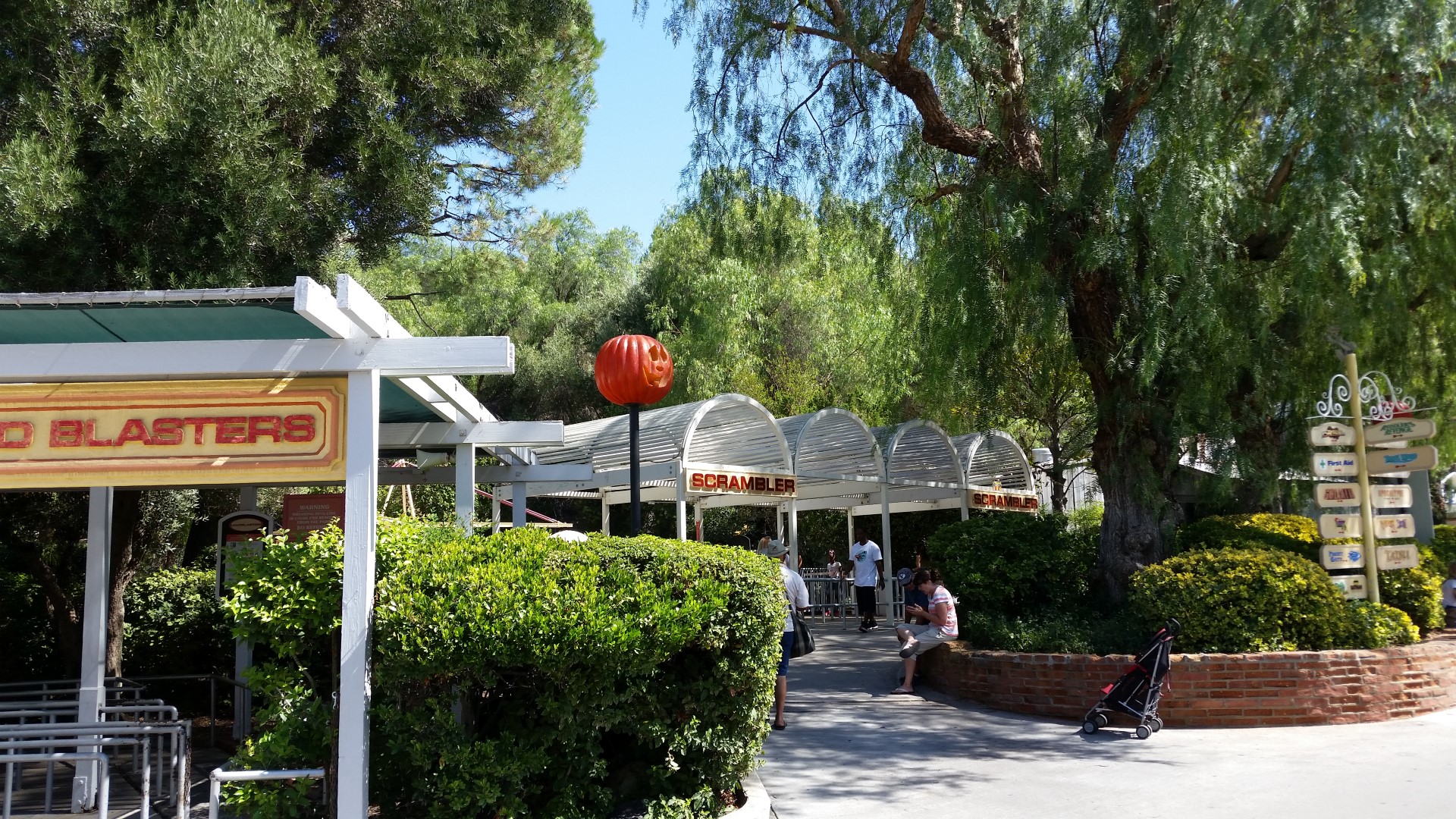 And then speakers, showlights, new theming, and the plaza lights are ready to go for Chupacabra! 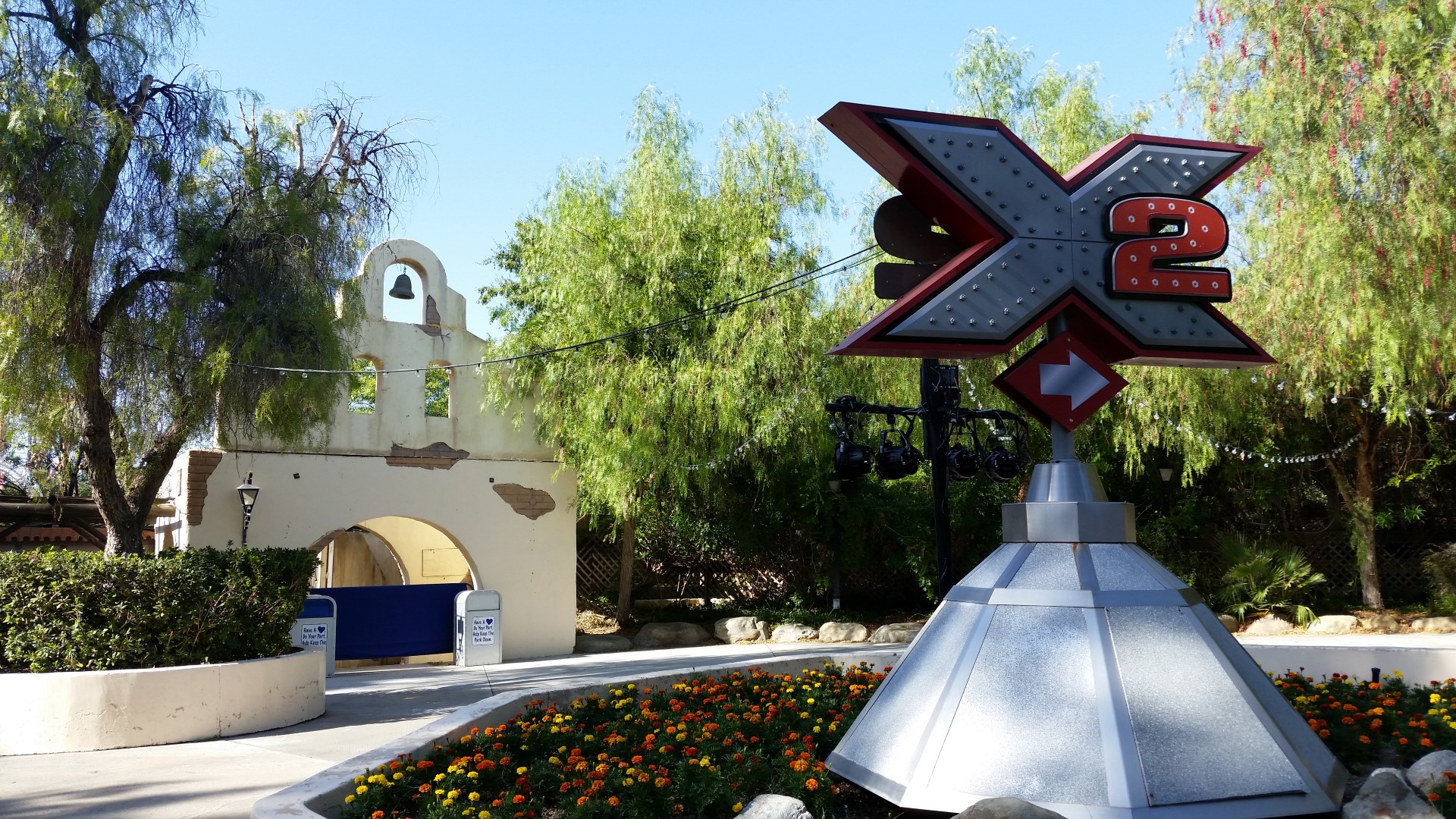 Back to the park’s operation… Goliath was having a rough day. It was operating as I arrived and then a train was stuck on the lift for a bit, it was empty. It then ran, and it happened again at the same point on the lift. I’m unsure if it reopened. 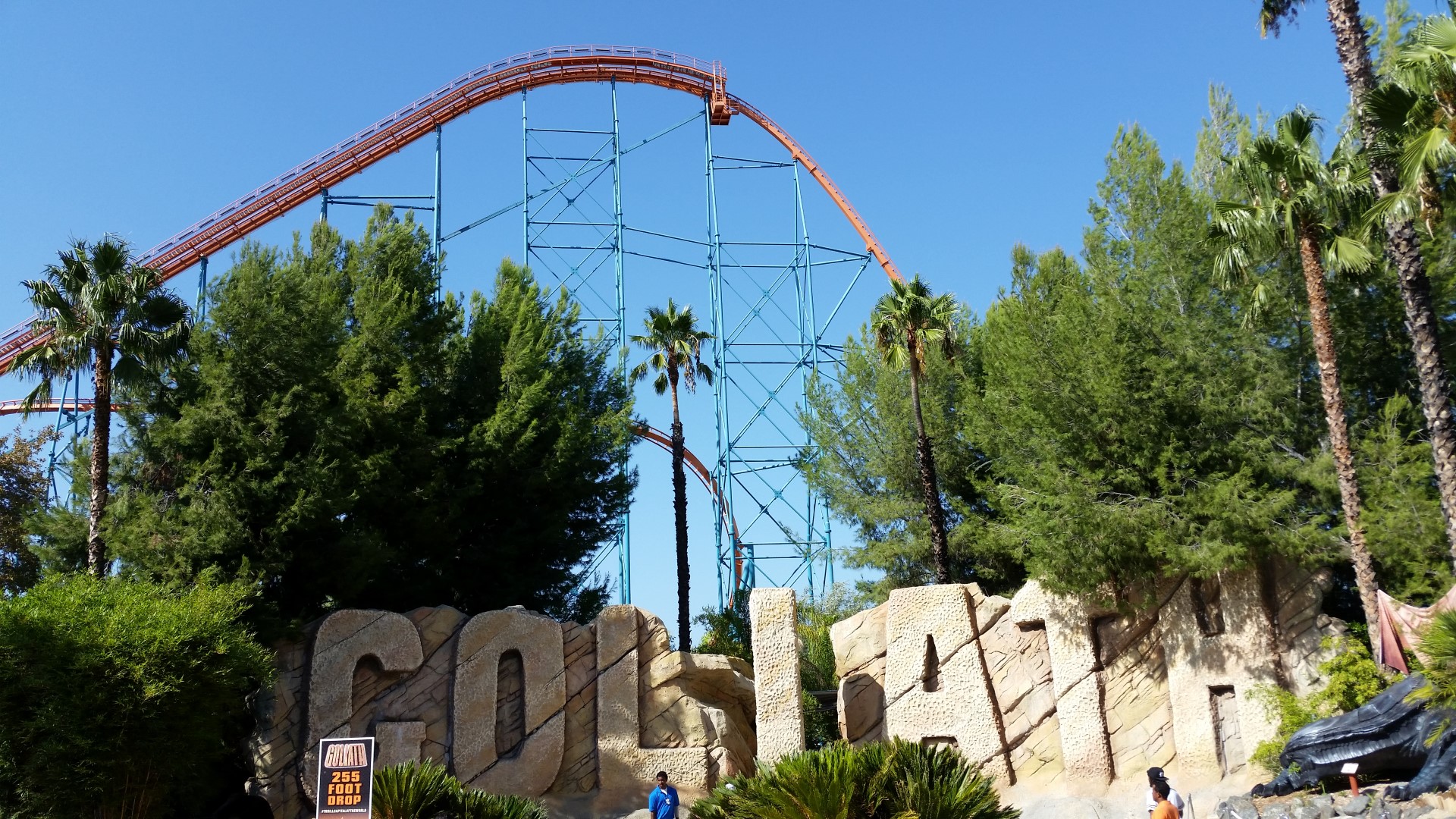 I actually had pretty decent rides on Scream!. First it was ‘bouncy’ on the lift, almost rattling, and I was fearing a rough ride. But I had some good spins on it. 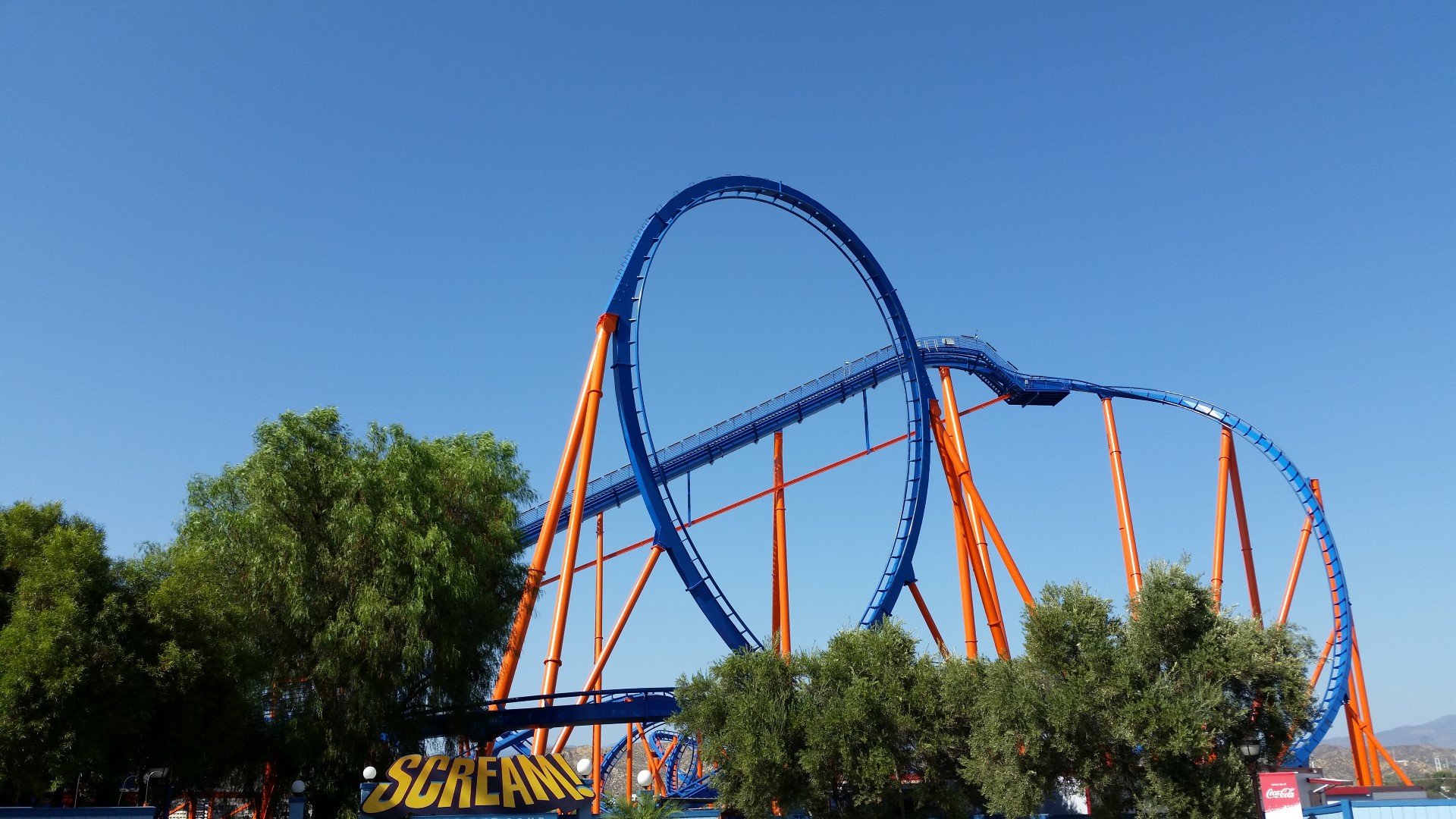 Of course I had some good spins on Twisted Colossus. Even got stuck on it for about 10 minutes. 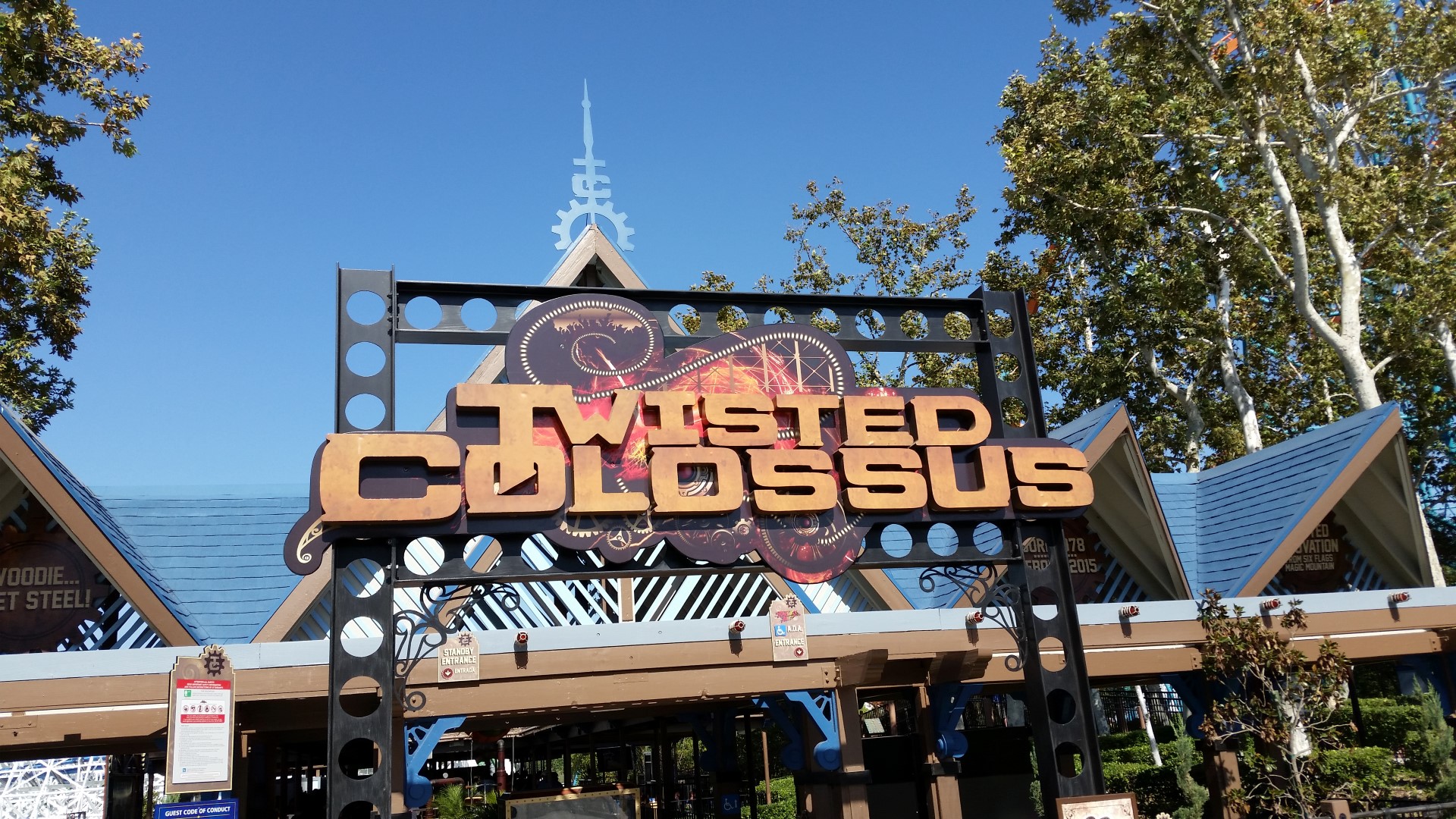 For those of you who didn’t read the last few updates, Tidal Wave will not be reopening this season. I forgot to mention in the last update that that’s due to the lift-motor blowing out. Which would explain why the boat is still on the lift. 😛 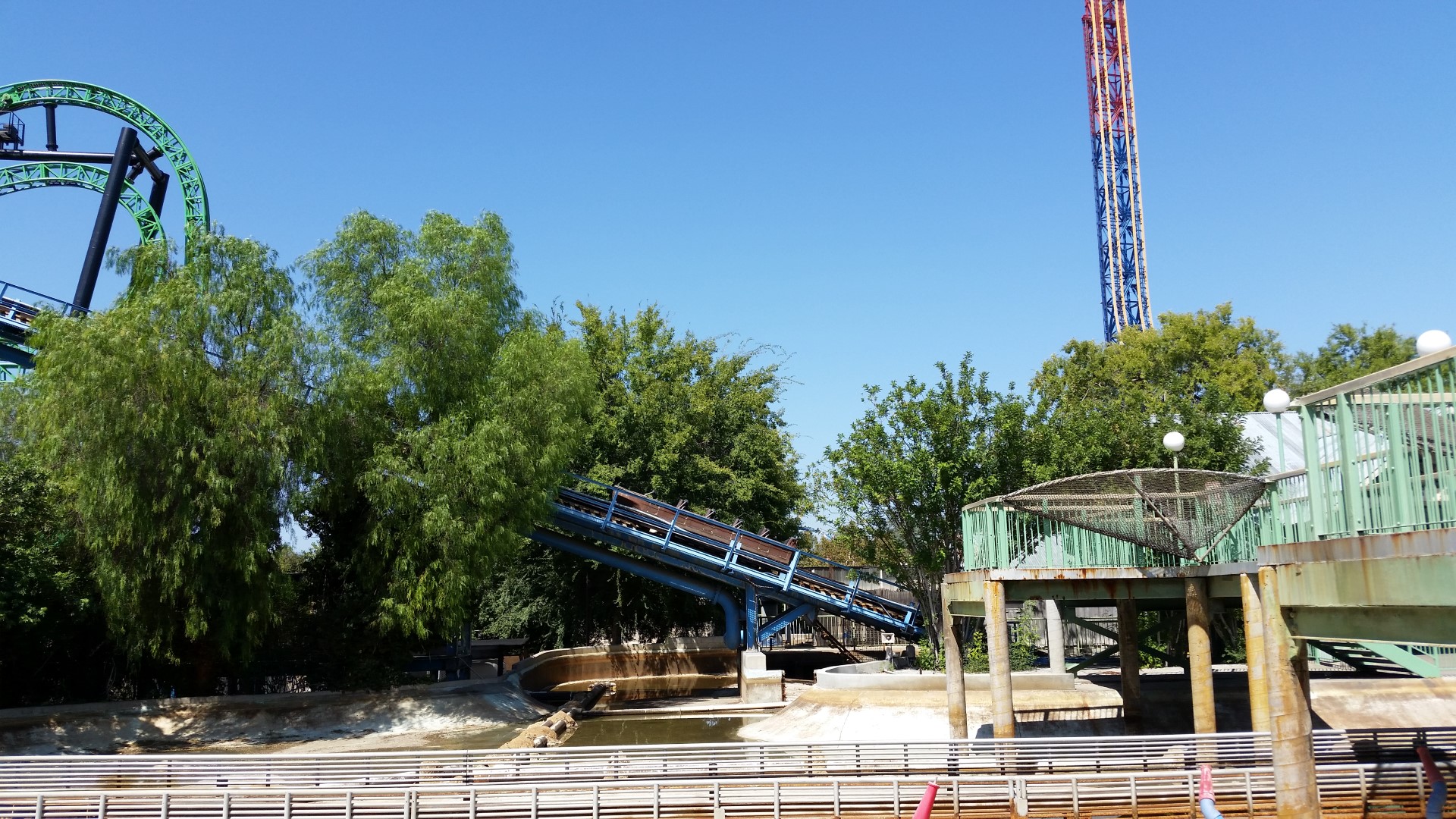 Since Revolution is closing on the Monday the 7th of September, I made sure to get some extra rides in without the crowds. And yeah, though I generally enjoy this ride, it’s gotten too rough. 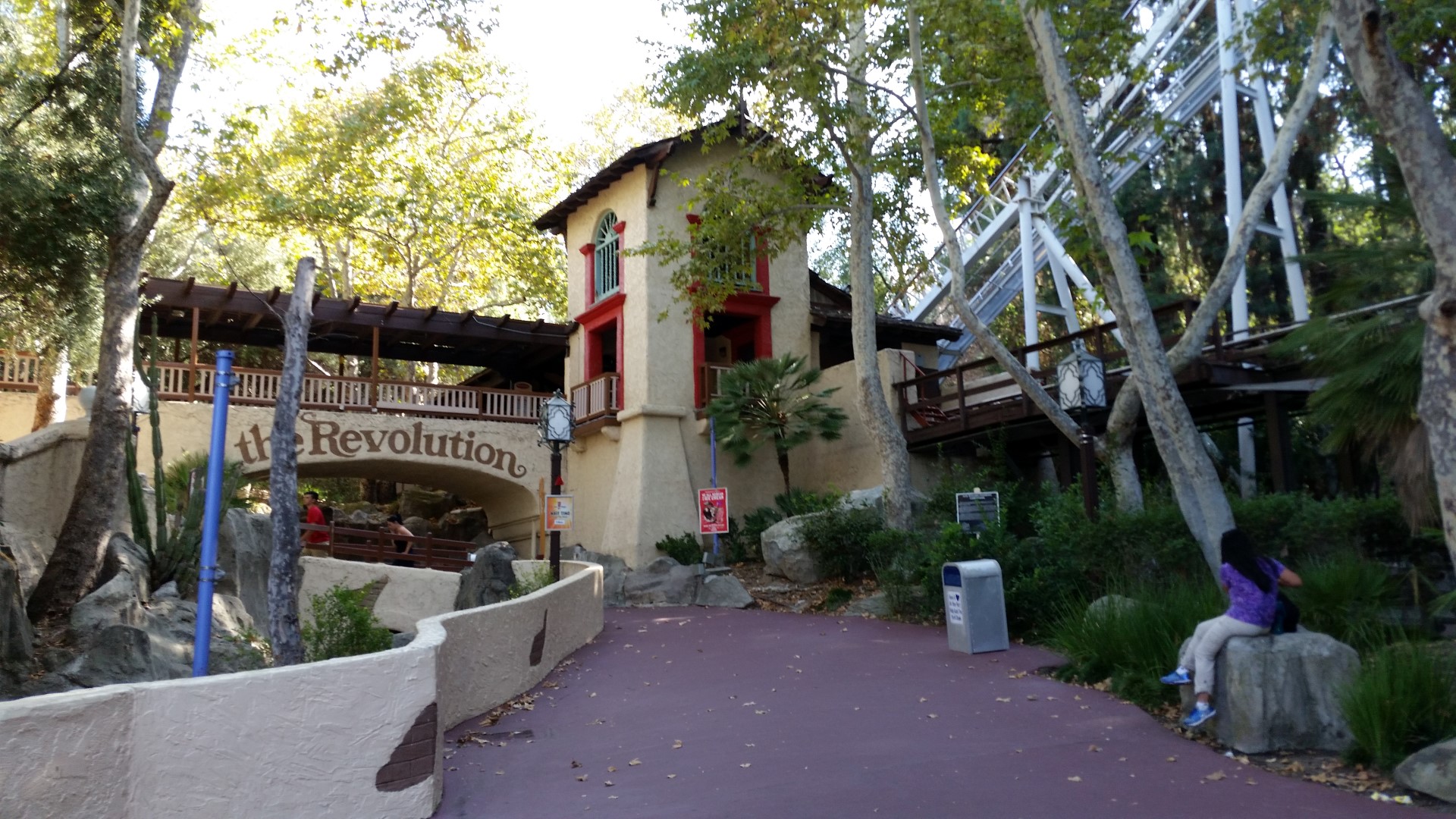 Though I’ll miss riding it regularly ’till next summer. I’m overly excited for it to get new trains and receive an extensive overhaul. 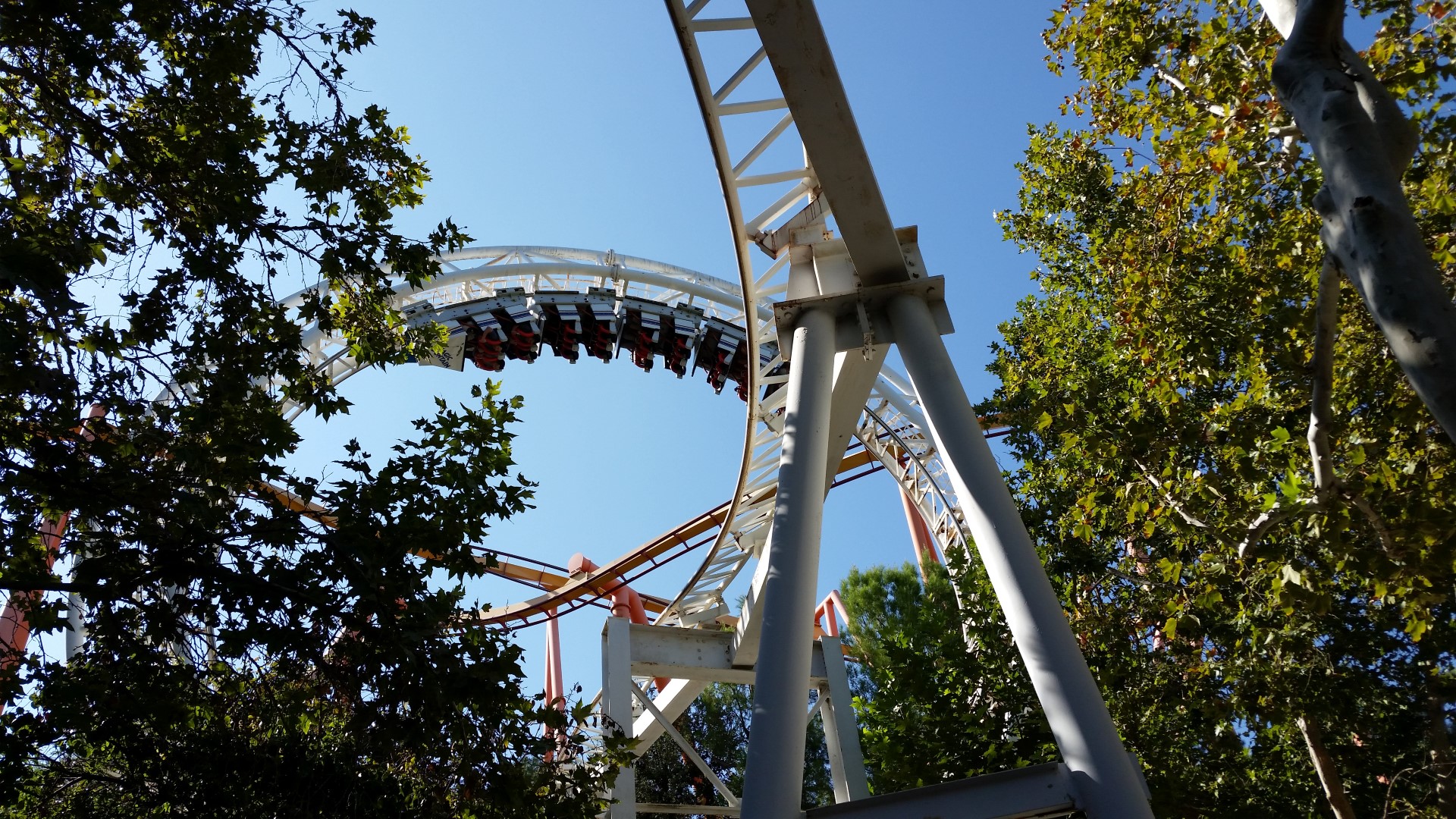 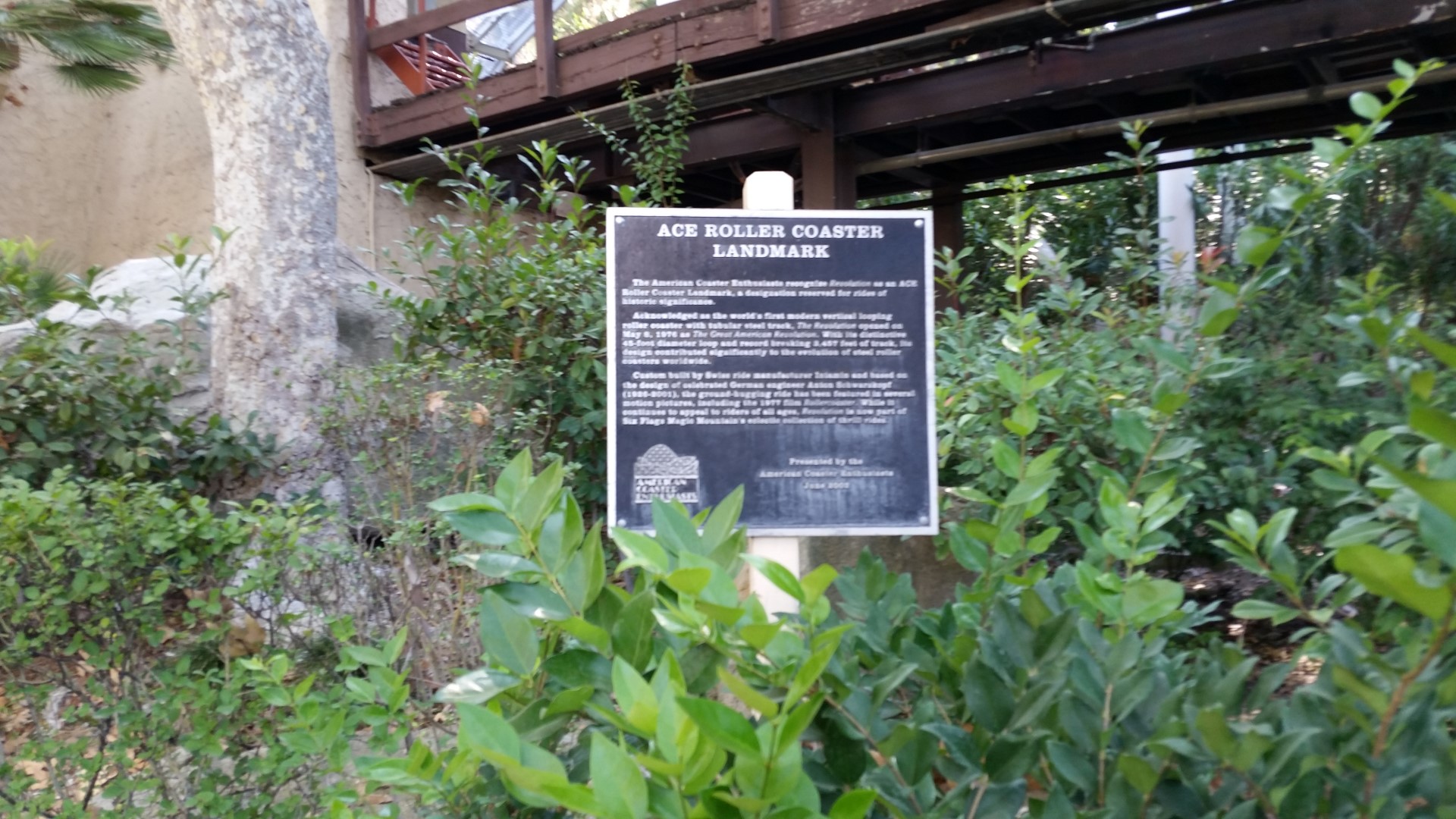 Oh, you have no clue how glad I am to see these OTSRs for one of the last times. 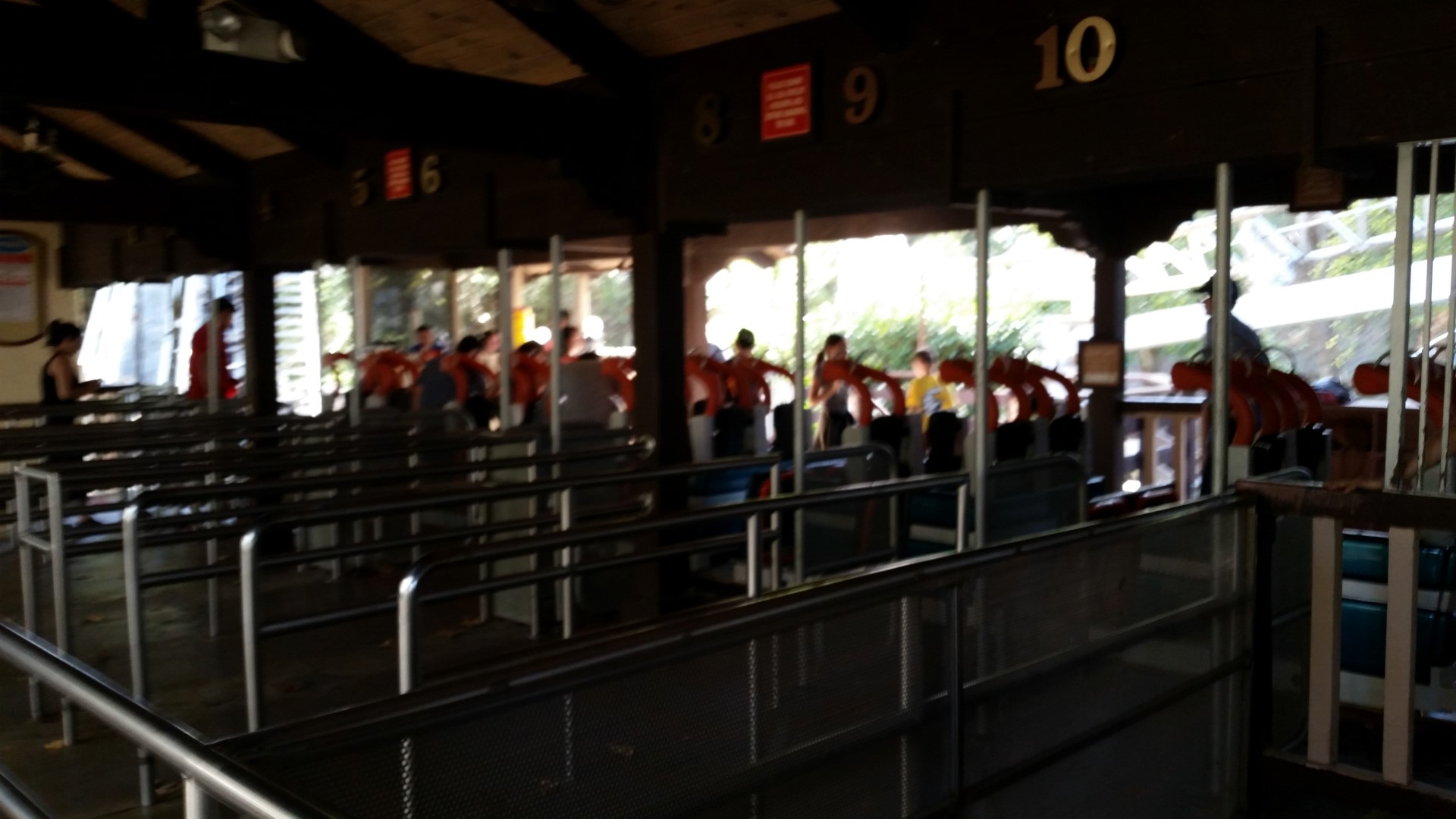 I also hope they fix up the rocks here, and recreate the waterfall! 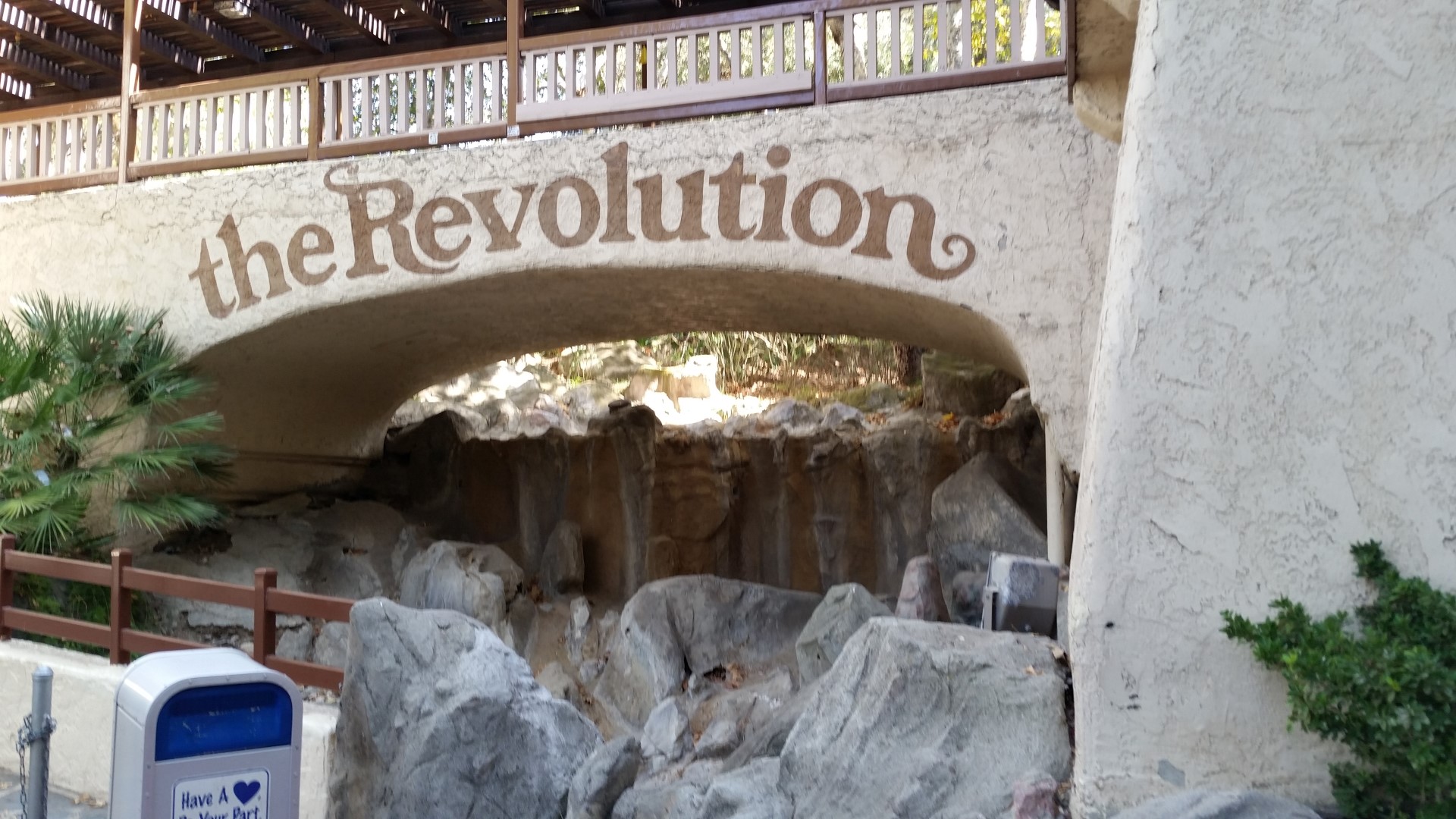 The New Revolution, the beloved steel roller coaster that has thrilled over 45 million guests in its 40-year reign at the park, will be repainted a brilliant white and blue color, while newly designed trains will be fitted with lap and calf bars, and feature Americana red, white and blue colors with a silver eagle hood adornment. For coaster fans, the elimination of shoulder harnesses will provide a smoother, sleeker ride experience with more airtime. 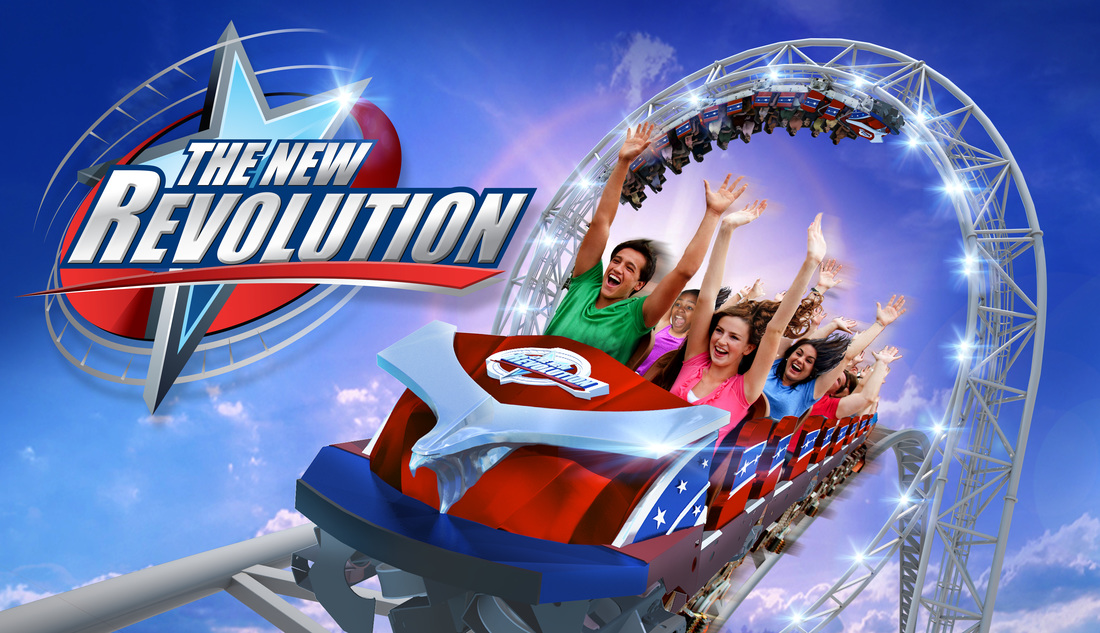 To end this update, I noticed Tatsu is getting very faded, and it’d be nice for it to be repainted soon. Especially with the fresh Revolution below. 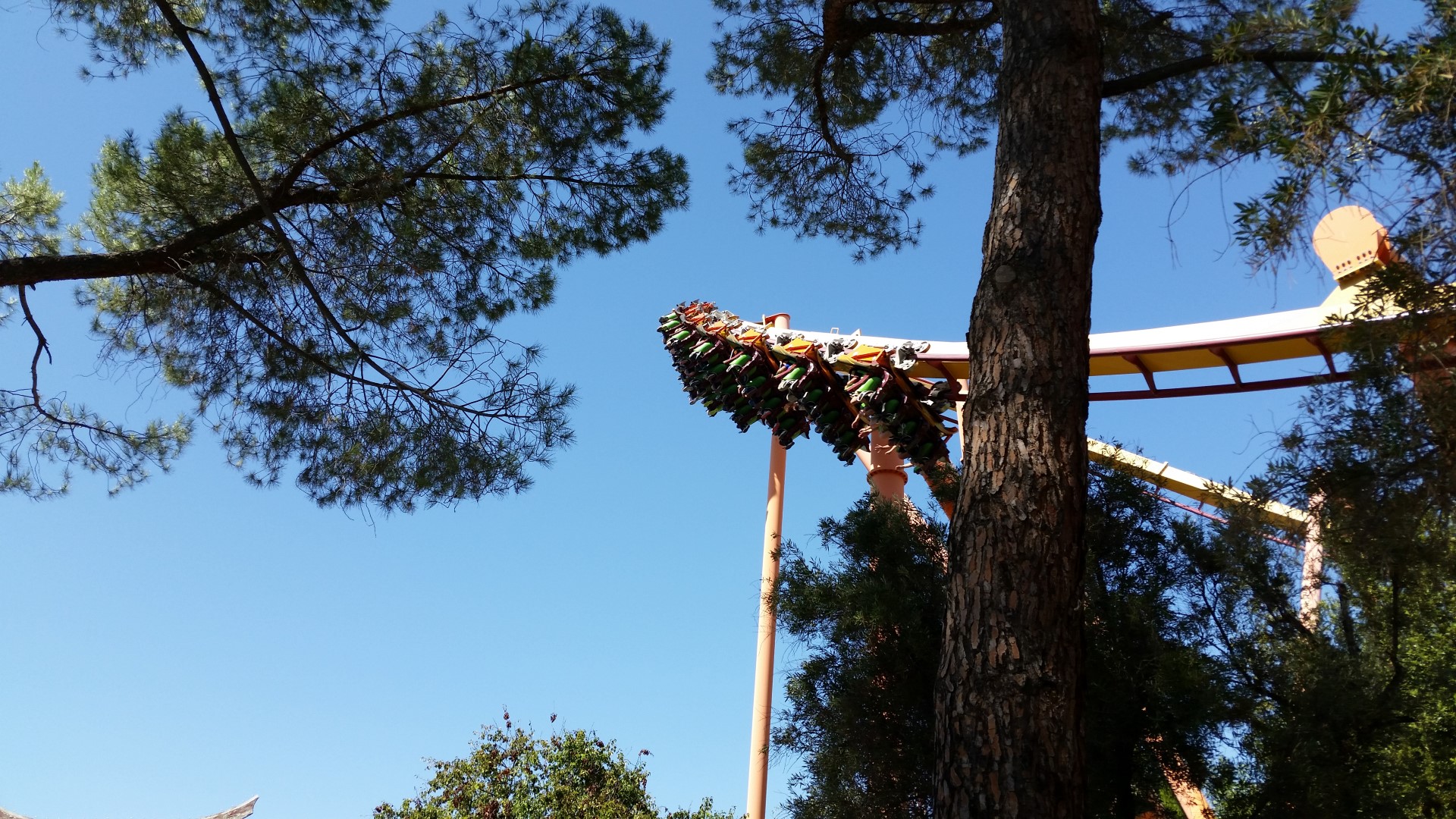 And in case you didn’t know, Full Throttle is soon losing it’s title, as a way taller loop is opening. A Mack coaster in Asia. Nontheless, Full Throttle remains to be a great coaster! 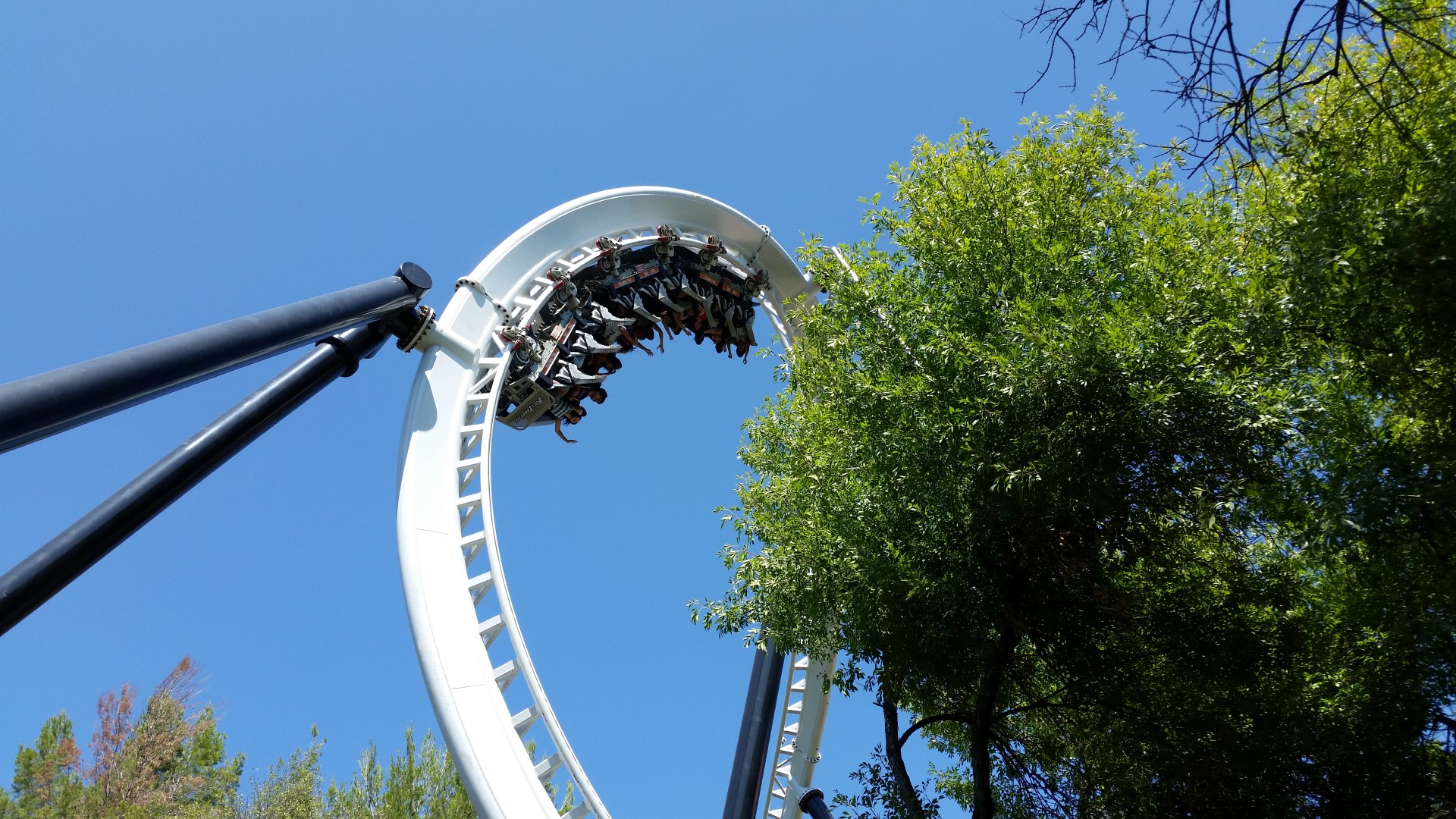 Thanks for checking out this Six Flags Magic Mountain Update! Several things we haven’t discussed in here, were discussed in the update of a few days back. Read that here.

Read all about THE JOKER and THE NEW REVOLUTION!

Leave a comment, and make sure to follow us on our social media for exclusive coverage!  Facebook–Twitter–Instagram