Sean: Fright Fest has started at Six Flags Magic Mountain for its 2017 run, and of course I was there to experience it! This year we’ll be launching two reports regarding the popular Halloween event, one discussing the Scare Zones (later), and one discussing the Mazes (right here). Enjoy our maze ratings and reviews!

How we rate and review:

The four ratings exist of a Length Rating, which relates to the length of a maze, the longer the better. This doesn’t necessarily mean physical length of walking through the maze, but may also indicate there are plenty of different scenes and that the maze felt long. The Scare Rating is exactly what you think it is, how ‘scary’ does a maze get, how gruesome it is, if it creates a bunch of jump scares, etc. The Set Rating looks specifically at the job done regarding the theming of the maze, how immersive the sets are, how many different scenes guests encounter, etc. And then last, but definitely not least… the Experience Rating. Which is mainly based off of the overall feel of the maze, was it a extreme? Did it leave you breathless? etc. The overall experience, combined with the other three factors creates a FINAL SCORE for the maze. (Out of 10, 10 being: “absolutely unbelievably amazing”, 1 being: “Don’t even bother visiting”)

This year’s new maze “Dead End” was a disappointment. The idea of a blackout maze where the lights are controlled, much like Knott’s Scary Farm’s new Trick or Treat: Lights Out, is amazing. Except the execution of Six Flags Magic Mountain’s version is particularly underwhelming. It’s lengthy, which is great, but the vast majority of the maze is plain black walls. So simple that it really does not belong at a modern day multi-million dollar Halloween event. The entry scene and finale are cool, but the majority of this maze leaves much to be desired. From the stacking of groups in pitch black corridors, to the minimal amount of actors, the maze becomes increasingly worse as you venture through. The premise is great, and the gimmick is very fun for the first few turns, but then it just becomes repetitive and the entertainment value quickly drops. Save this for last, it’s not that terrible that I advice you to not at all visit the maze, but it is the weakest maze in the park’s line up. 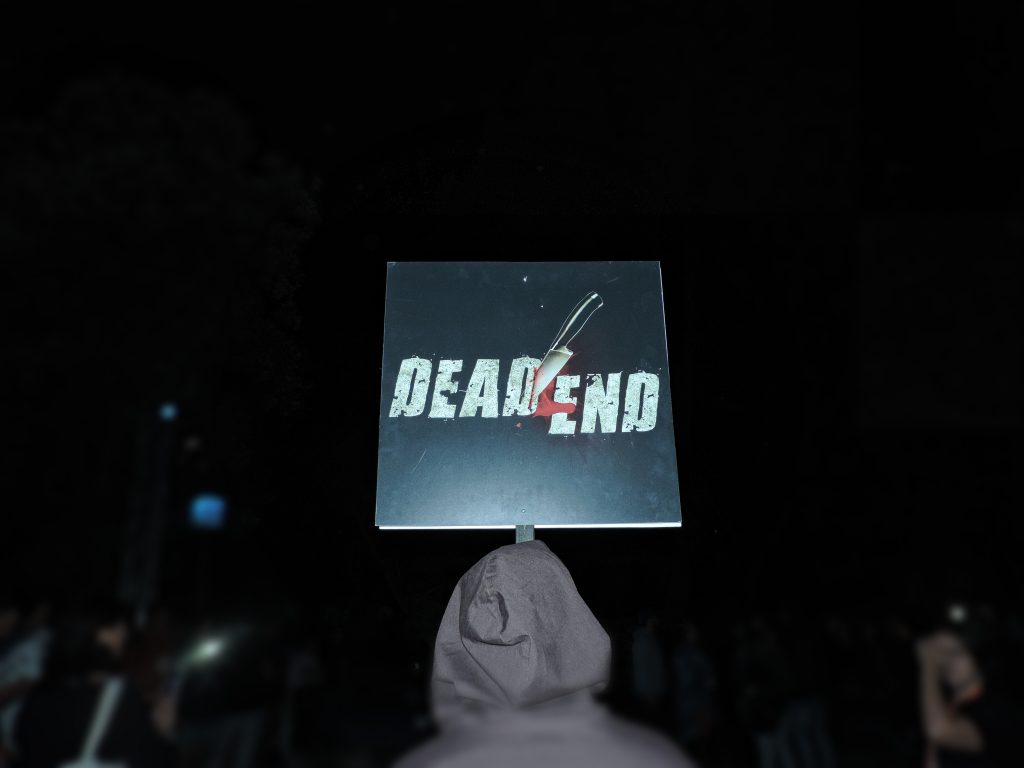 I have always loved this maze since its debut in 2014. The maze has a pre-show, large sets in a soundstage type setting, and some beautiful scenery. It’s not the longest maze, but what it does, it generally does well. The storyline is easy to follow and there are lots of different types of ‘scares’/’acts’ throughout the maze. It is not the longest maze at the event, by any means, but thanks to the focus on large scenes, the maze still delivers and doesn’t feel particularly short. My only concern in its 4th year of existing, is the fact that some parts of the maze aren’t very well kept up, and the lack of actors, particularly at the end of the maze, are unfortunate. 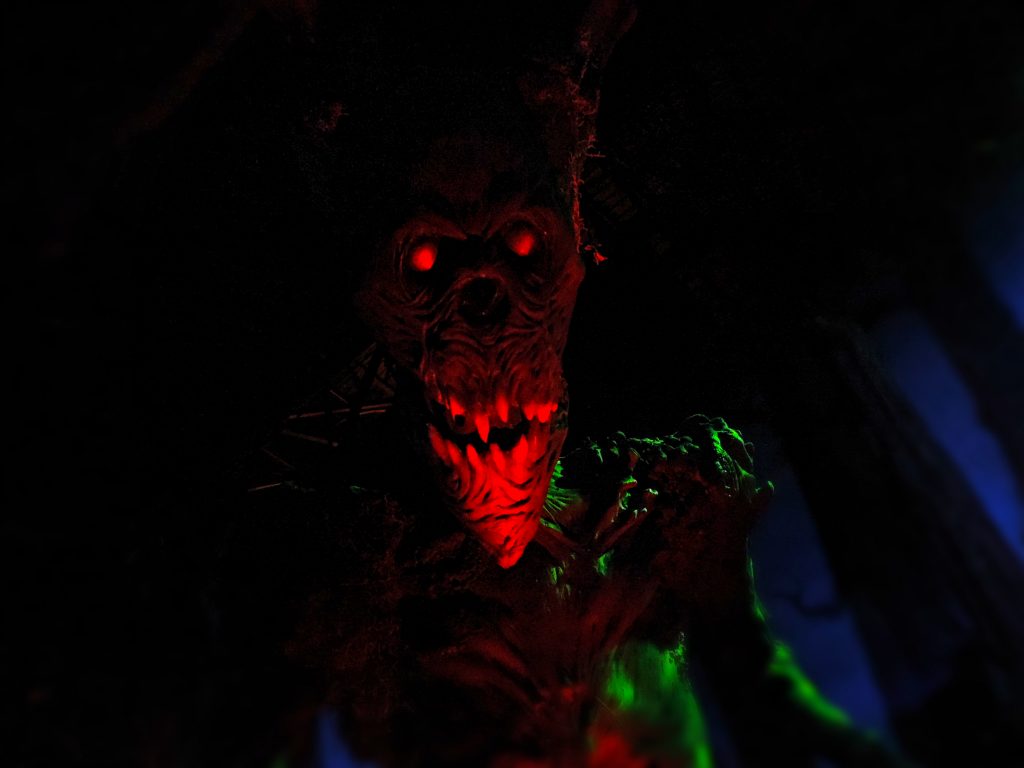 The maze that combines a pre-show, find-your-own path section, plenty of mechanical effects and a plethora of scenes to create one of the best maze experiences this park has ever seen. Where I may get tired from seeing the same mazes year after year, Vault 666 always has enough to look at and to experience and is definitely one of the stronger mazes in the park’s line up. The story is well-developed and the scenes, though small, are much like little shows. Not to forget that this maze is completely inside and built in a permanent building. It is particularly long for a maze of that type and I would love to see this maze get a new scene for its return next year. Make this maze one of your priorities. It never fails to deliver. 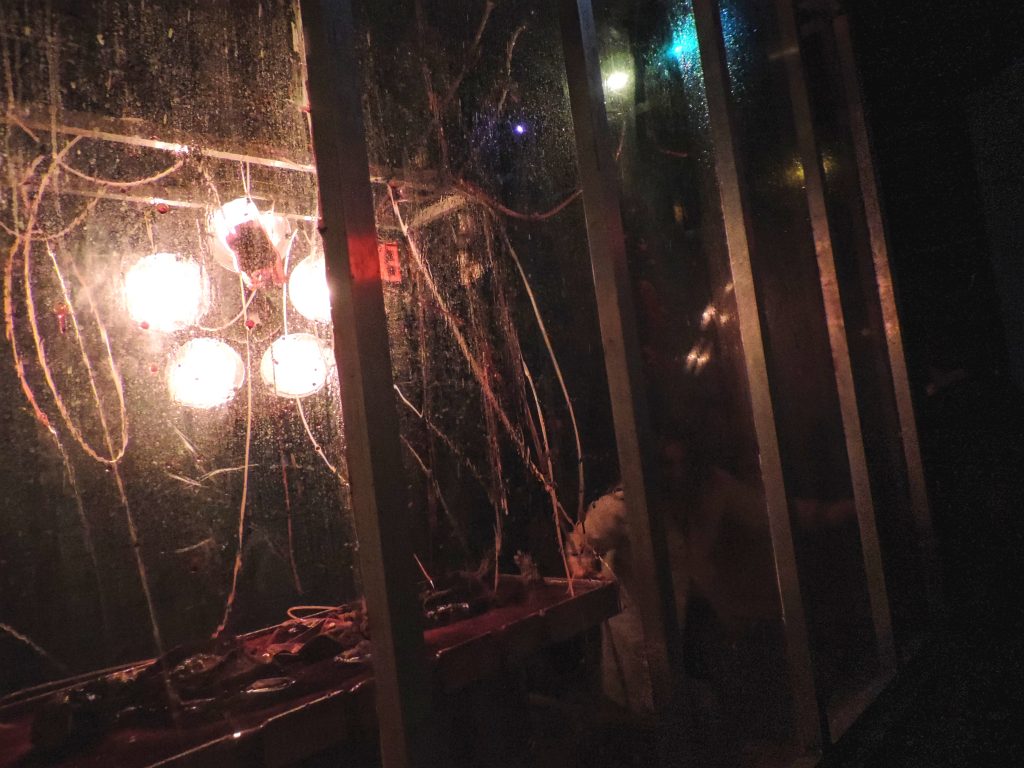 Returning again this year is Chupacabra, which I’m starting to consider an event-classic. They added to the maze over the years, and it really has turned into a hidden gem with hardly any lines. The maze is not the longest, but it has a fun combination of inside and outside scenes. The main appeal for this maze has always been the intense amounts of fog as you navigate the mission. That was lacking this year’s opening weekend, but I’m confident that will return soon. I’ve always enjoyed this maze but it’s not something to write home about. I think replacing it, or giving it a major refurbishment next year, would be in the event’s favor. It’s an easy maze to visit, and when lines get long elsewhere it’s a great maze to knock out. But if you have to prioritize, this belongs with Dead End in the “visit if you have time” group. 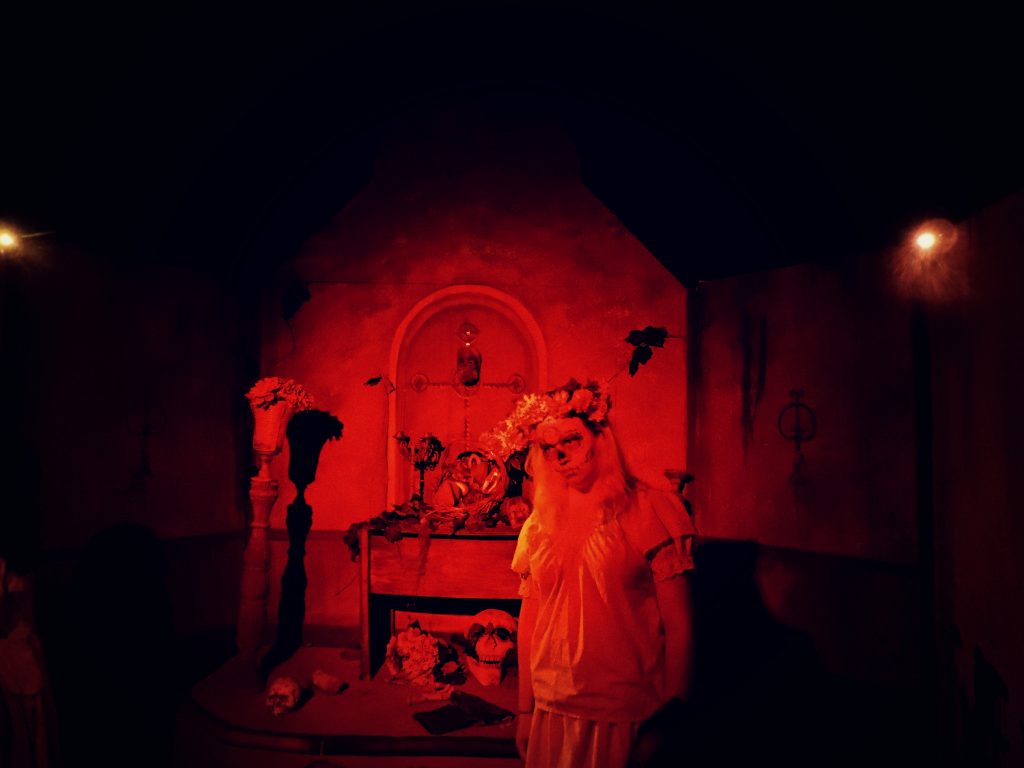 Toyz of Terror 3D is also back this year! This maze is one of those mazes I enjoy for so much that is not meant to scare you. The 3D painting of the maze’s malls, slanted hallways, hidden doors, bright colors, spinning tunnel, etc is just fantastic. There’s a fun little pre-show and the maze as a whole has plenty of fun scenes to enjoy. A lot of 3D mazes don’t work well, but in this case that’s not something to be concerned with, the 3D glasses are complimentary and the 3D effects work wonderfully. In addition this maze does a great job hiding plenty of small little scares throughout. The lines seem to move decently quickly, and this is a maze I always advise readers to check out, it’s just very different from your usual Haunt mazes. 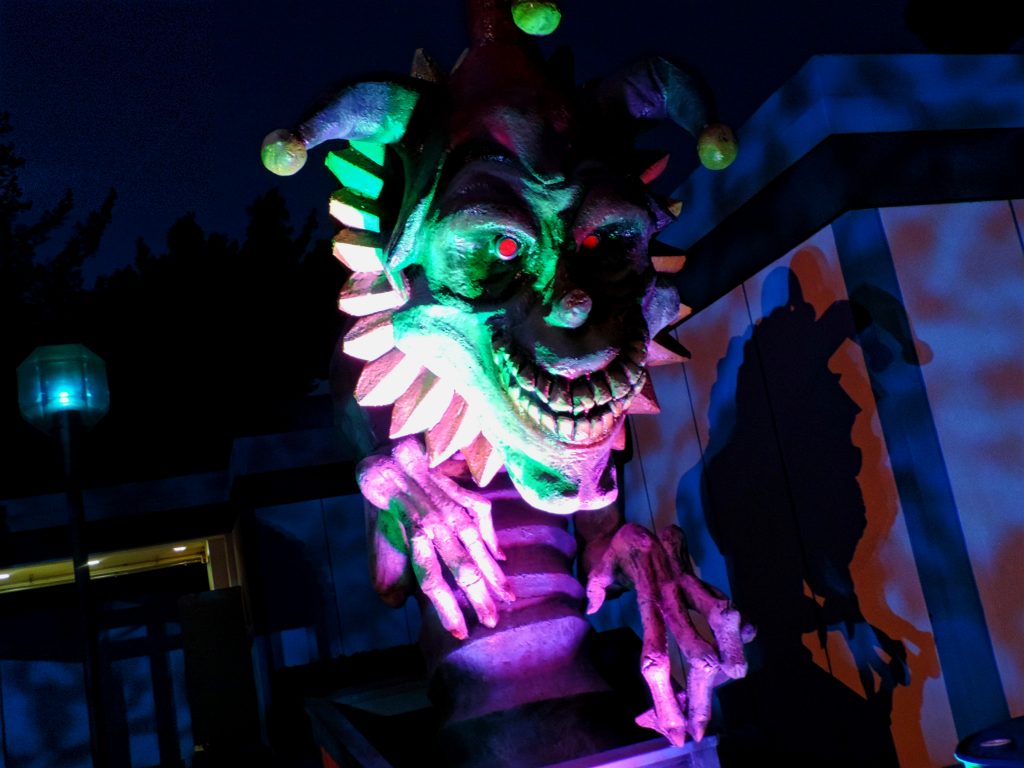 Willougby’s Resurrected, part of the Top 3 of the event for sure, and never fails to deliver. Its classic haunted house theme is no longer accompanied with a pre-show, which speeds things up and will benefit guests in line. The maze is long, features plenty of actors and scares, including some mechanical effects I really enjoy. In addition the maze’s layout really follows along a tour of a mansion, from dining rooms, hallways, all the way to the dungeon, boiler room and nursery. I very much enjoy this maze and there’s a solid amount of actors and scares throughout the maze. Year after year it demonstrates to be one of the event’s best attractions and there’s so much detail I never get bored of going through this maze several times a night. Willoughby’s Resurrected is a maze you’d want to prioritize. 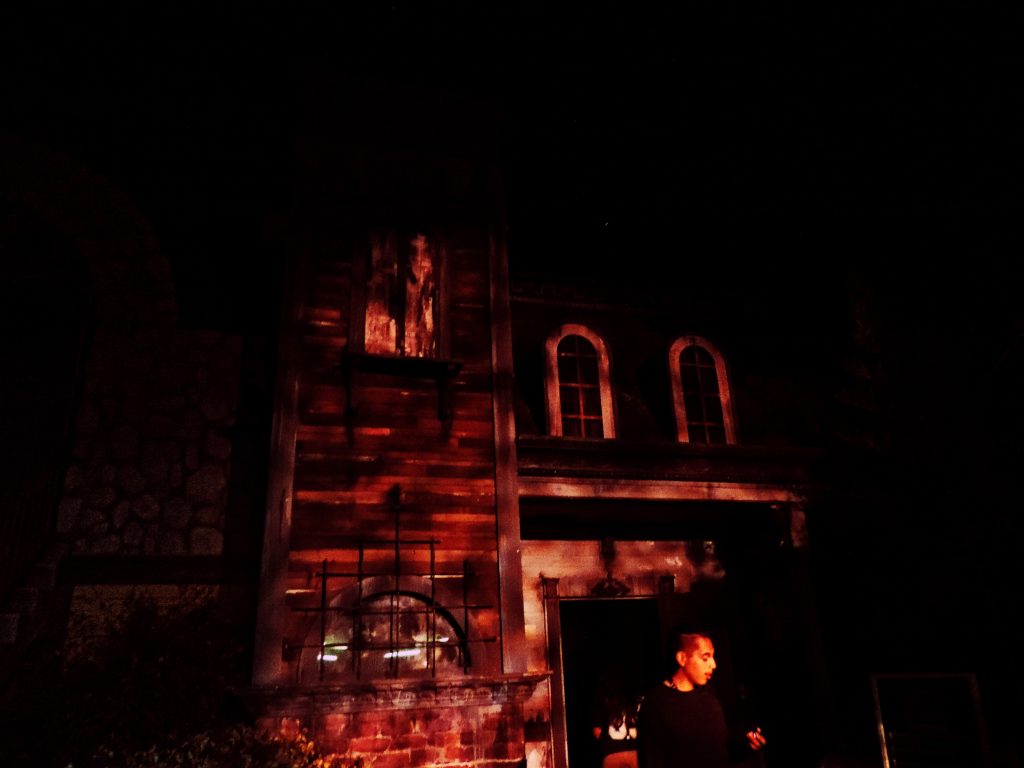 Last but not least the biggest maze in the Six Flags (chain wide) Fright Fest history. Aftermath 2: Chaos Rising combines a lot of new concepts for the park. They combined scare zone like sets, larger set pieces, flame throwers, some inside sections, and a choose-your-path to create a very large maze. Even though the maze feels too spread out at some points, the maze has incredible potential, is impressively sized and has a lot to it. Unlike last year, the maze is actually well staffed, so the experience has definitely improved from last year. Don’t expect constant small scares and scenes, you’d be disappointed. Expect a large show that you walk through with impressive effects and sets, and you’ll really enjoy Aftermath 2: Chaos Rising. This is amaze that the park could improve upon and change annually, and thus I am excited for this maze’s future. Along with Willougby’s Resurrected and Vault 666 you’d want to prioritize this maze. 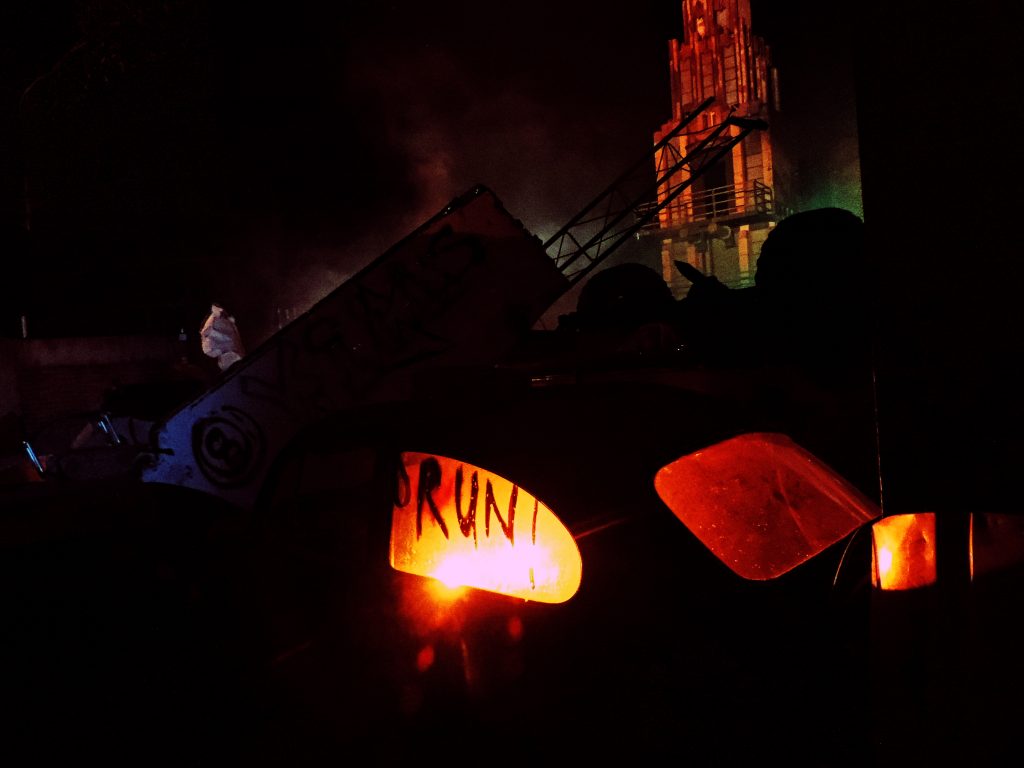 There’s no maze at the entire event that is going to remotely feel similar to other mazes at the event. Often times you visit a haunt event and a lot of mazes have the same general feel to them. At Six Flags Magic Mountain that is not the case at all. 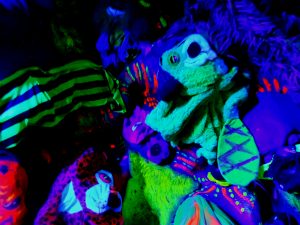 Be sure to buy a maze wristband. Regular wristbands are $17 for pass holders, $22 for one-day admission guests. To wait in shorter lines, you may purchase an Express Pass, which is $32 for pass holders, and $37 for those without a season pass or membership. The event hours are 7PM-1AM on Fridays and Saturdays, and 7PM-11PM on Sundays! Don’t miss out!