Alex: The video game industry is undoubtedly more popular than ever before. That’s why the success of some video games has been exported into different means of entertainment. Today, we’re going to review a collaboration between Futuroscope and the worldwide famous video game brand Ubisoft, on one of their more popular, and crazy, games. We’re talking about La machine à voyager dans le temps aka The Time Machine that can be found at Futuroscope, France,  hosted by the silly Rabbids!

The ride starts as soon as you step foot in the queue line. The entire queue is a big playground. You will not be bored, it’s impossible! Futuroscope has thought about every little detail to have fun, even at the most boring part of the ride. For example, at one point of the queue you have to play hopscotch, to go on all fours, or to play a hopping game. 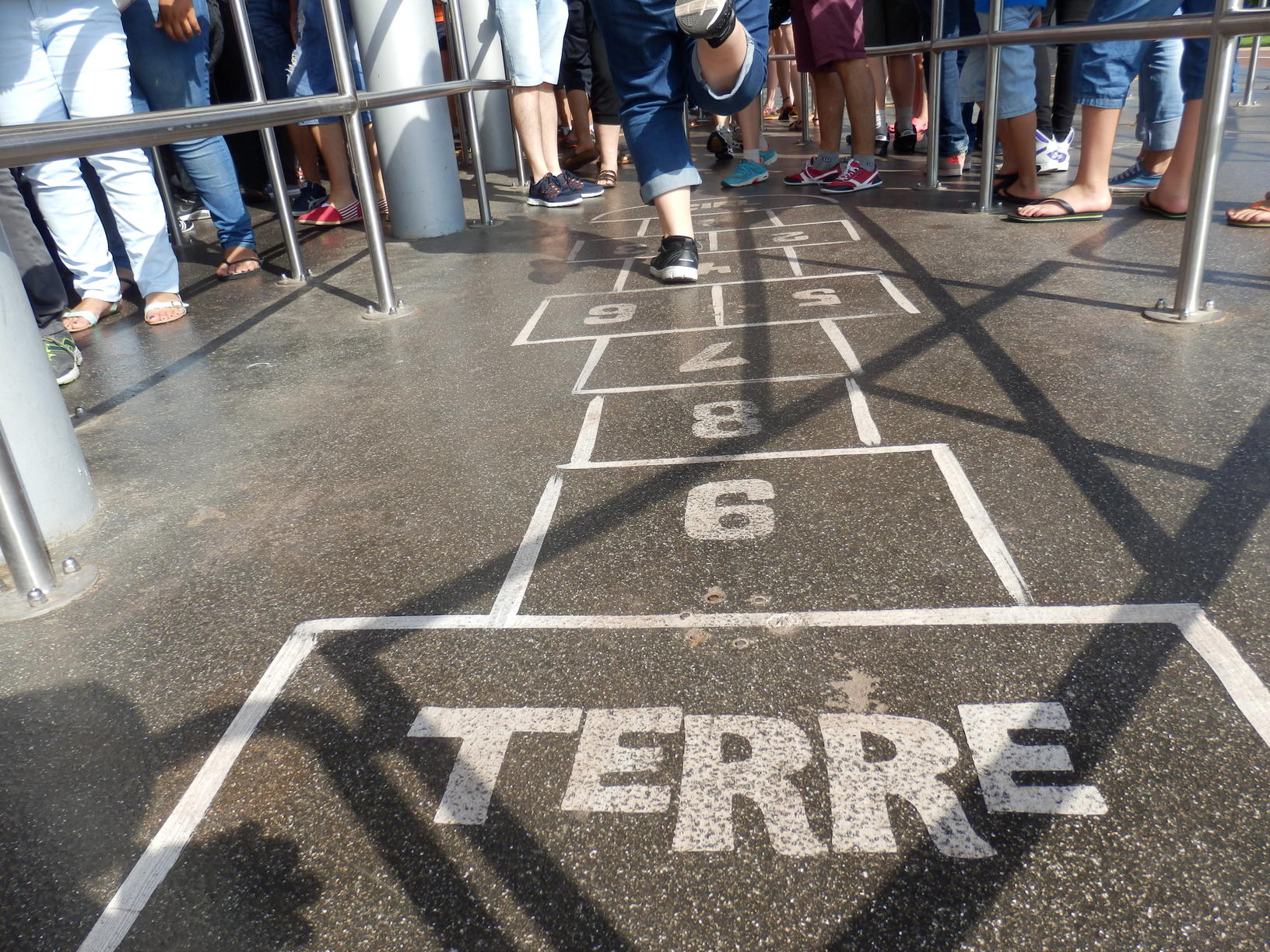 We queued for about 45 minutes, but the time flew by, as we were entertained like never before in a line. How lucky we were that we found a door with a direct access to the ride! Of course, it was a fake door and a prank from the Rabbids that lead to nowhere! 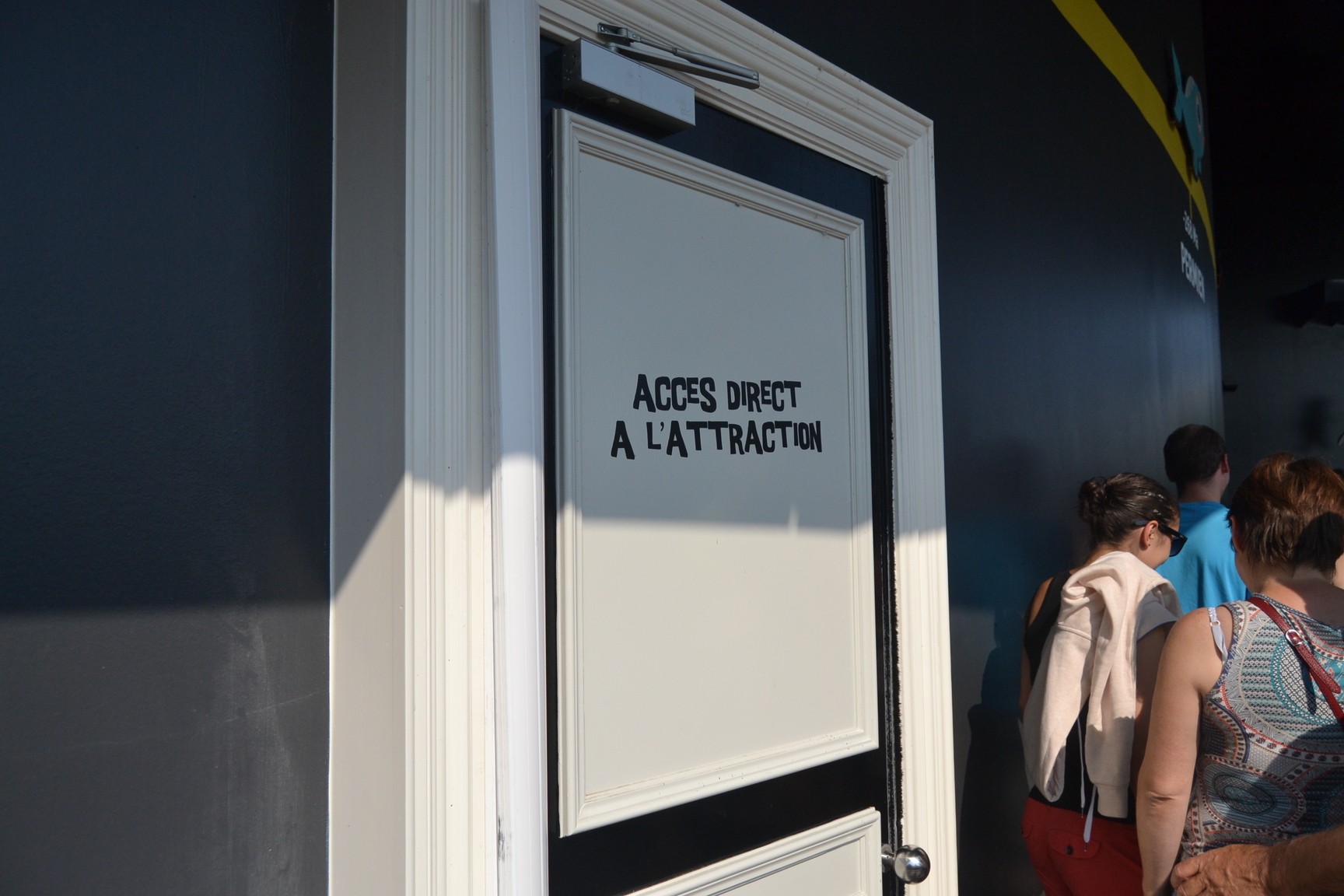 At last, we arrived at the show building, the great Museum d’Art et Science, ummmm… or I should call it the Museum des Lapins Crétins? (Note: Lapins Crétins is the name of the Rabbids in France). 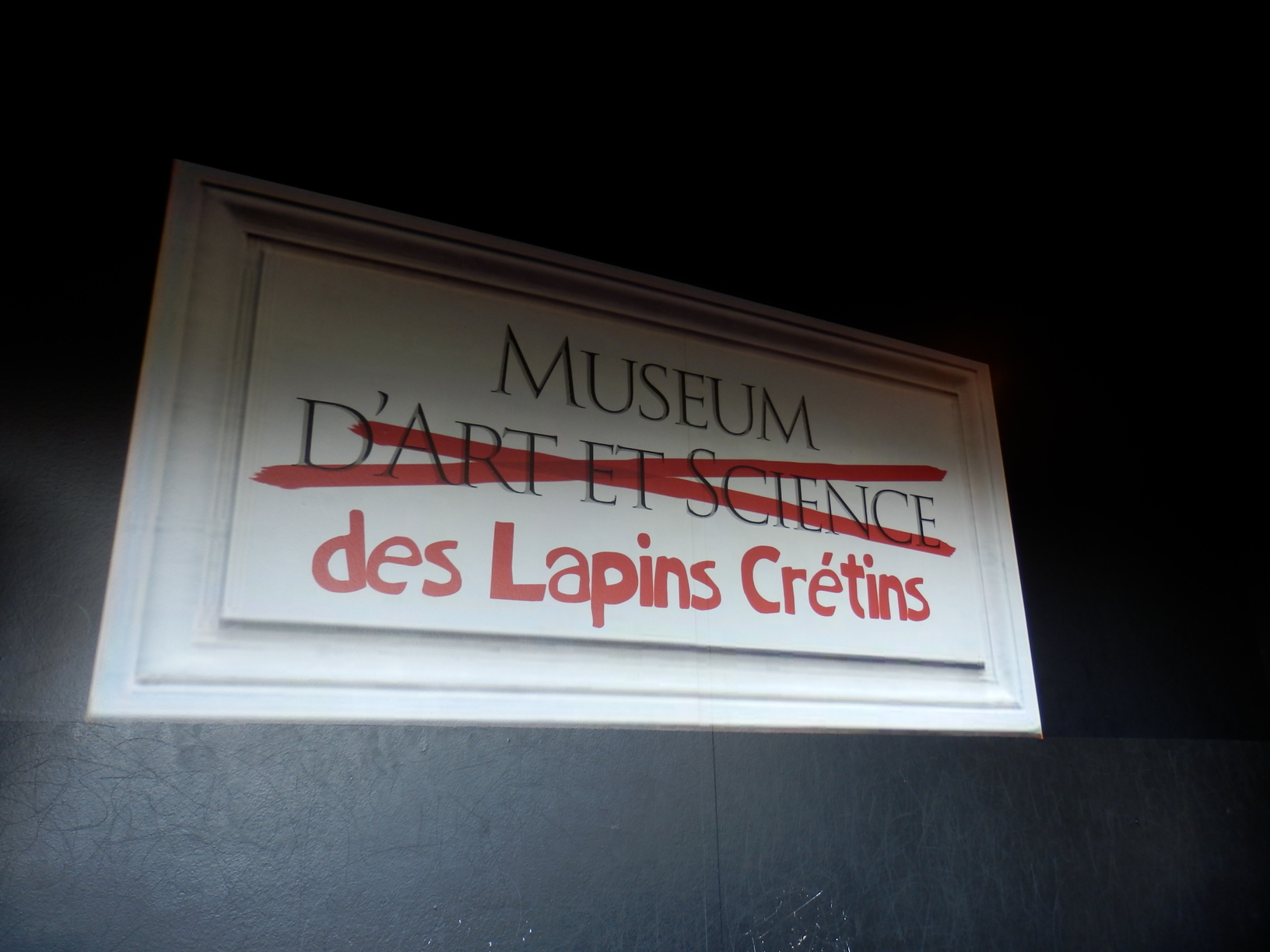 The Rabbids have hacked the museum, and now all the expositions explain the Rabbids history! In the first room, we can see famous works of art, but with a Rabbids touch. Some of the paintings were in fact screens, in which a fly was travelling from one to another, and the Rabbids interact with it. As always, in the silliest possible way – the Rabbids way! 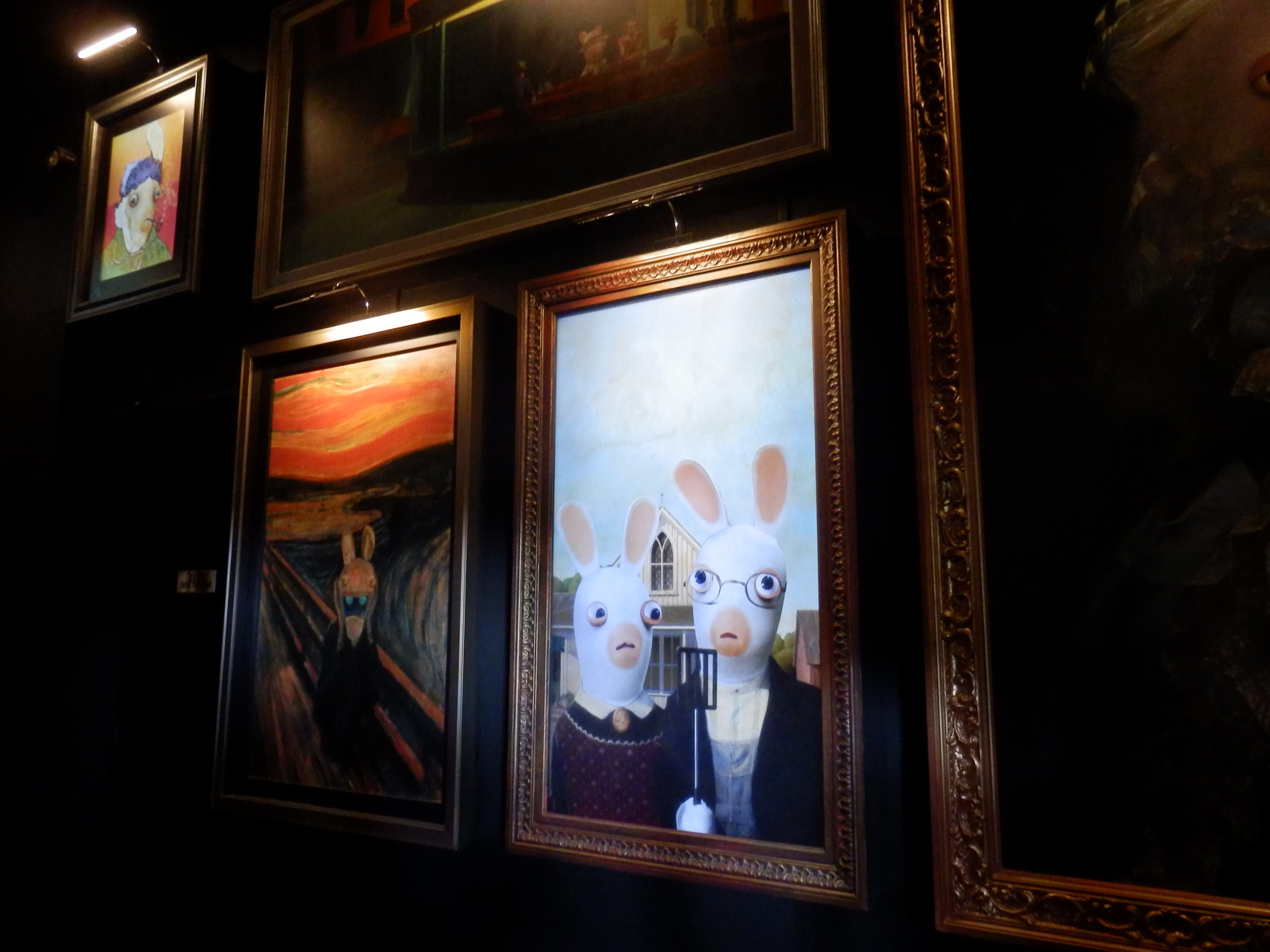 The next room was the exhibition room. It was full of objects from around the world and throughout time, all used by the Rabbids. We could found a Rabbid shaped sarcophagus, a Rabbid anatomical model, a double toothbrush (as the Rabbids only have two teeth), some armour (also Rabbid shaped, of course), the first release of The Invincible Iron Rabbid, (a parody of Iron Man), and even a dinosaur skeleton! 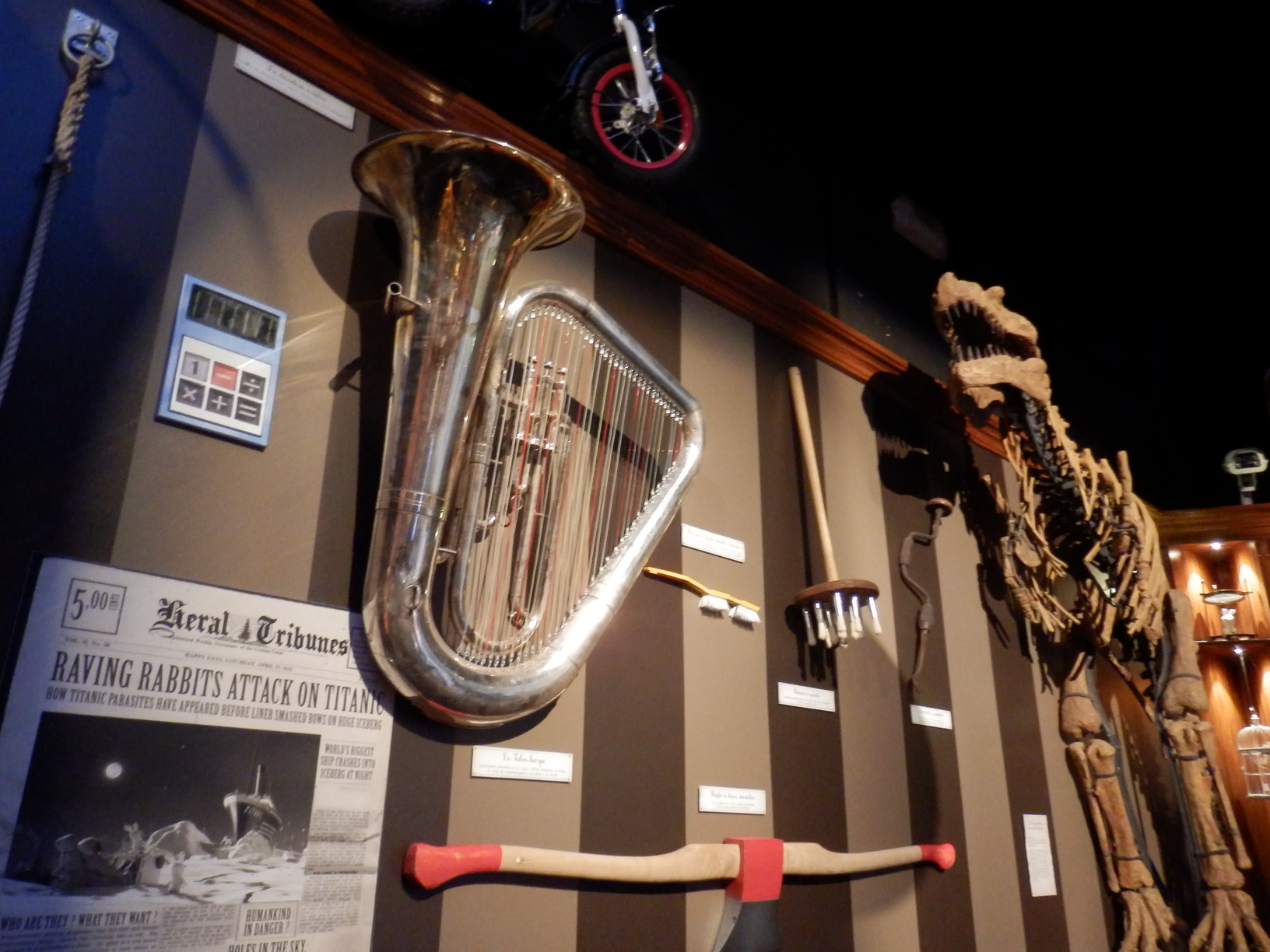 And at the foreground of the picture is located the most important item of them all; The Time Machine! Yes, it’s a washing machine, but what to expect from the Rabbids? All those items were brought to Futuroscope by Joravision, who did an fantastic job of researching, and it’s wonderful to look at all the objects, which are amazing and full of detail! 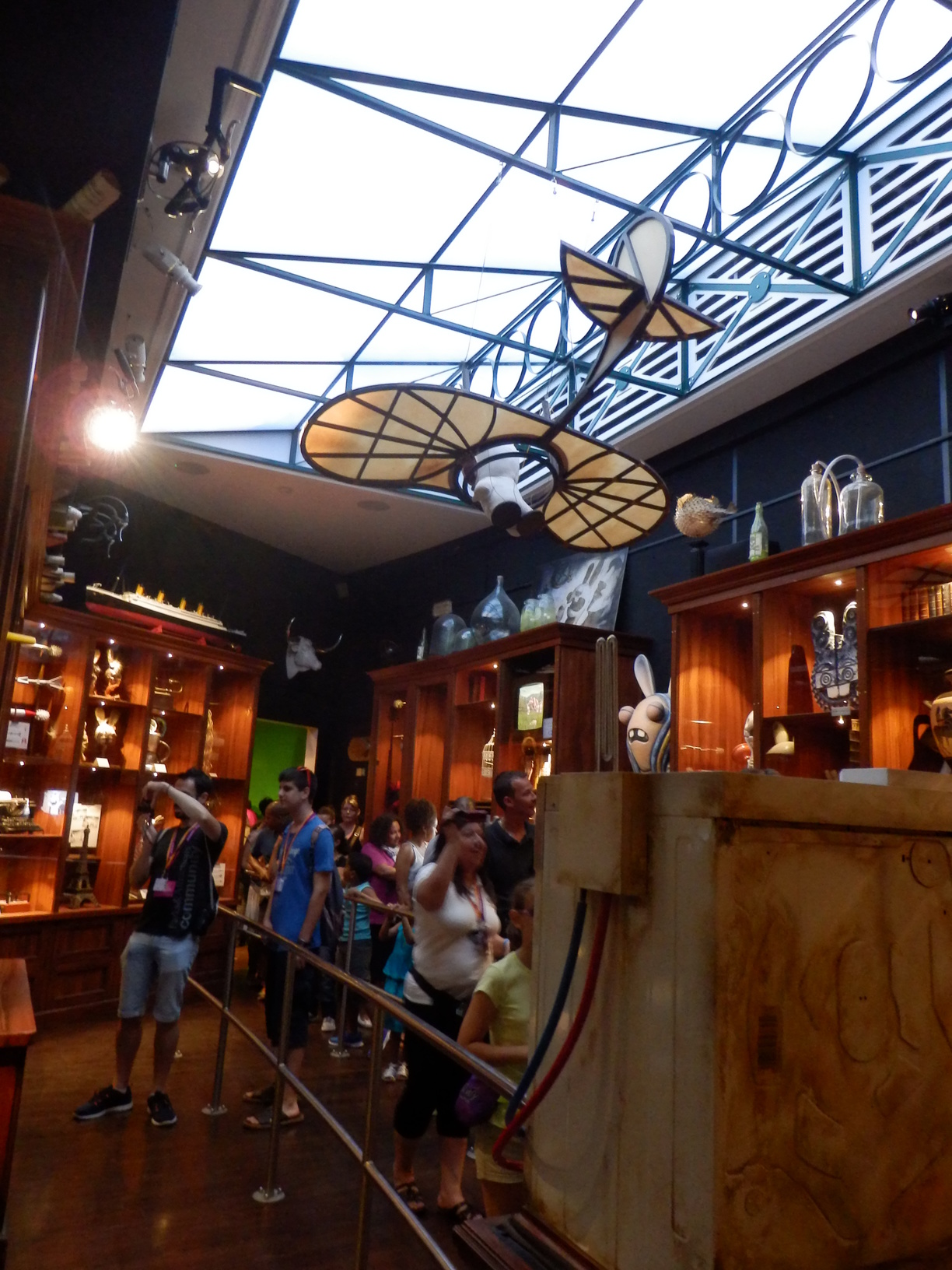 Our next stop was… guess where? Of course, the restroom of the museum, where the Rabbids were waiting for us! Here is where the ride itself starts. We sit on a toilet and put on our 3D glasses. Then, the crazy Rabbids starts to destroy the walls in front of us, and thus the Time Machine is revealed.

At this point, our journey to the Rabbids history begins. We move left through numerous rooms, each one themed to a period of time. Those are Prehistoric, Ancient Greece, Native America and a final room where a Rabbid starts to play with a control panel and we quickly go through lots of periods of history, from the Titanic’s sinking to the Moon landings. All of those scenes are possible thanks to 3D screens, real theming, movement of the seats, water, air and special effects; which merge together into an amazing and unexpected experience. Below the last scene from the ride!

Once our journey is finished, we return to the original restroom, but we immediately notice that something is a little bit different… the room is completely upside down, with toilet paper everywhere, the floor cracked, the fluorescent lighting is flickering and there are objects stuck to the walls, such as traffic cones and UFO’s! 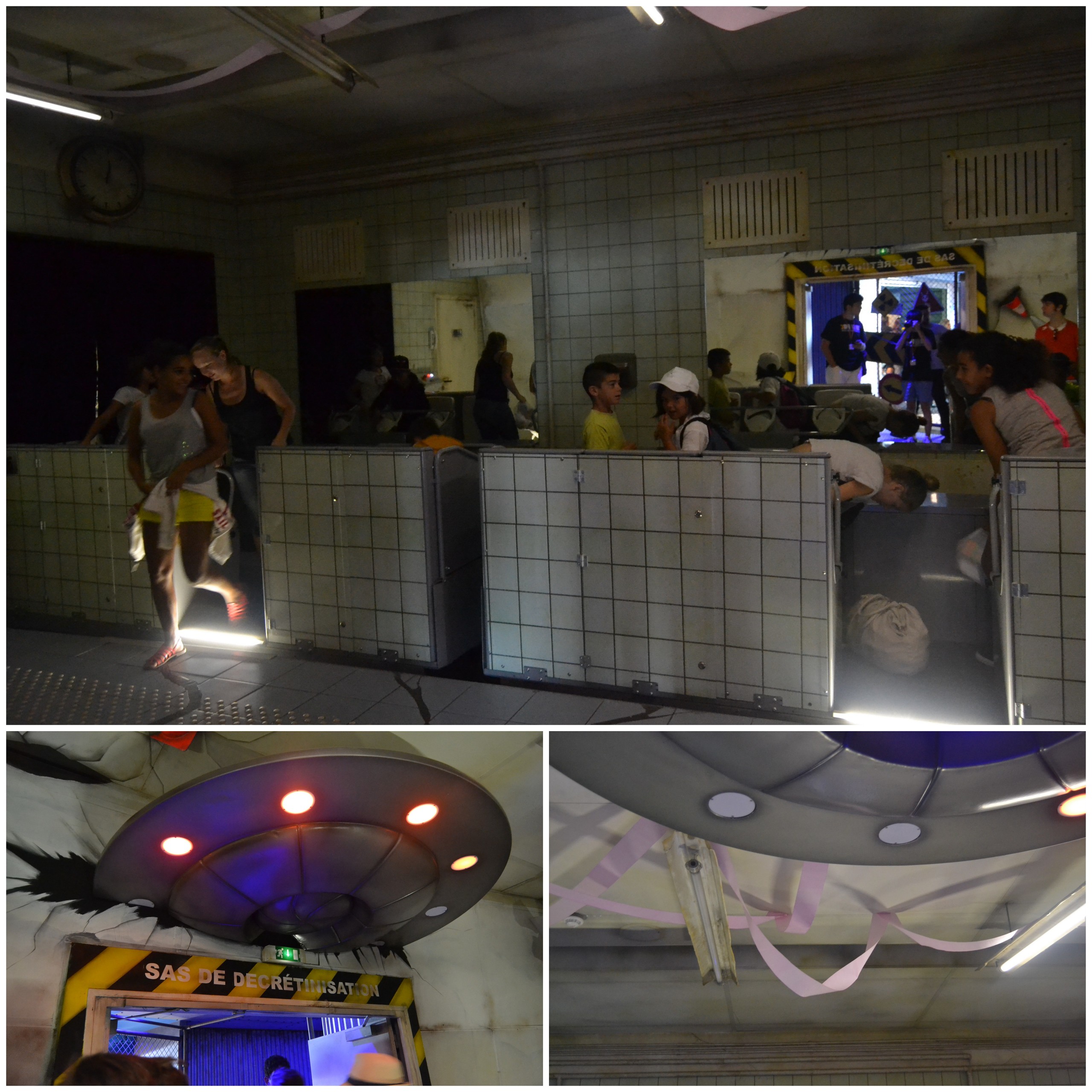 After this crazy ride, you are now stupid like the Rabbids! In order to avoid this, the park has installed a “Sas de Decrétinisation”, an airlock where you are decontaminated, and ready to exit the ride. 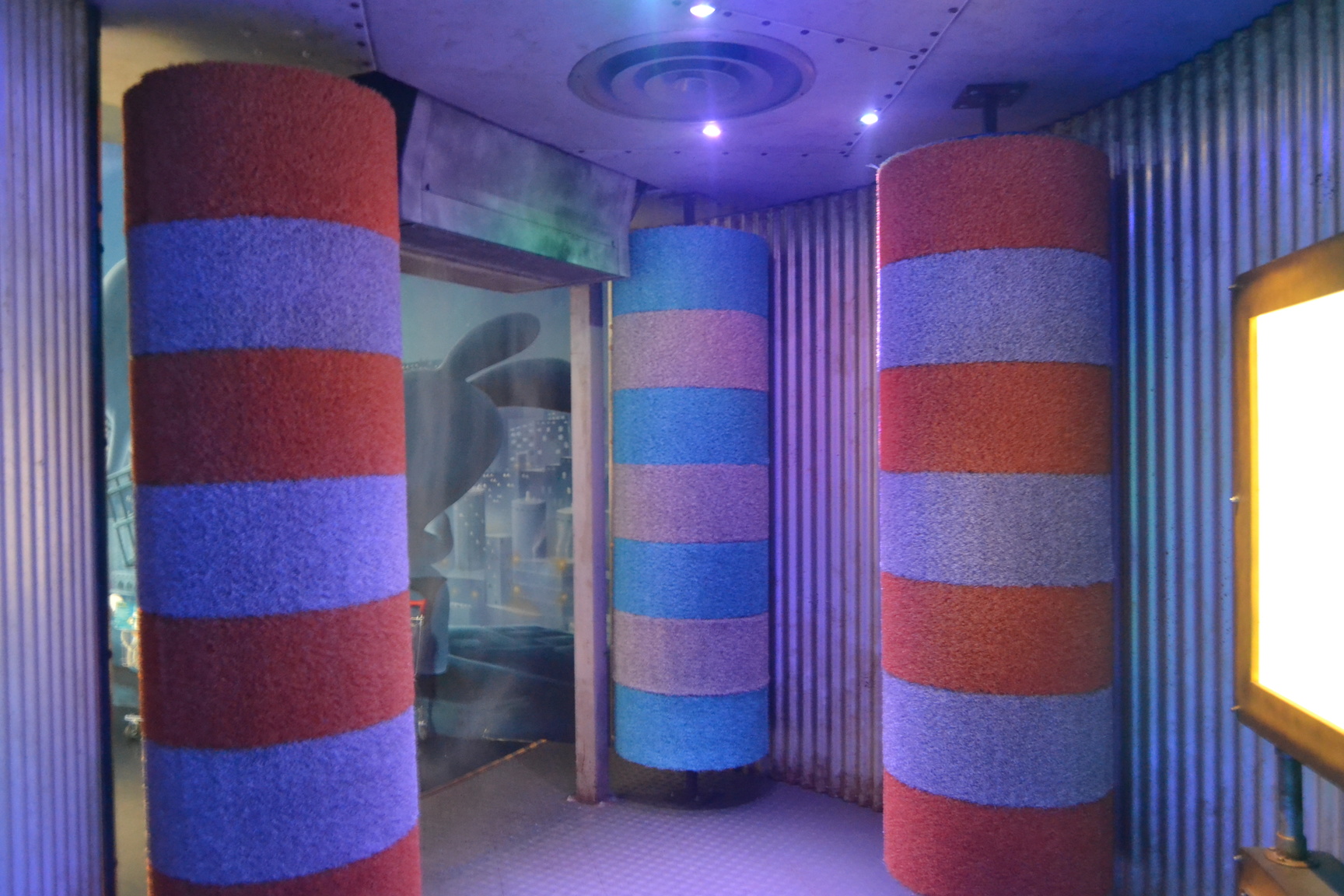 But before that, we have to go through the shop. There is plenty of cool stuff Rabbid merchandise, from extendable forks and fly swatters, to a diversity of fluffy toys, teddy bears, and even construction games of the Time Machine and the submarine where the Rabbids arrived to Futuroscope. 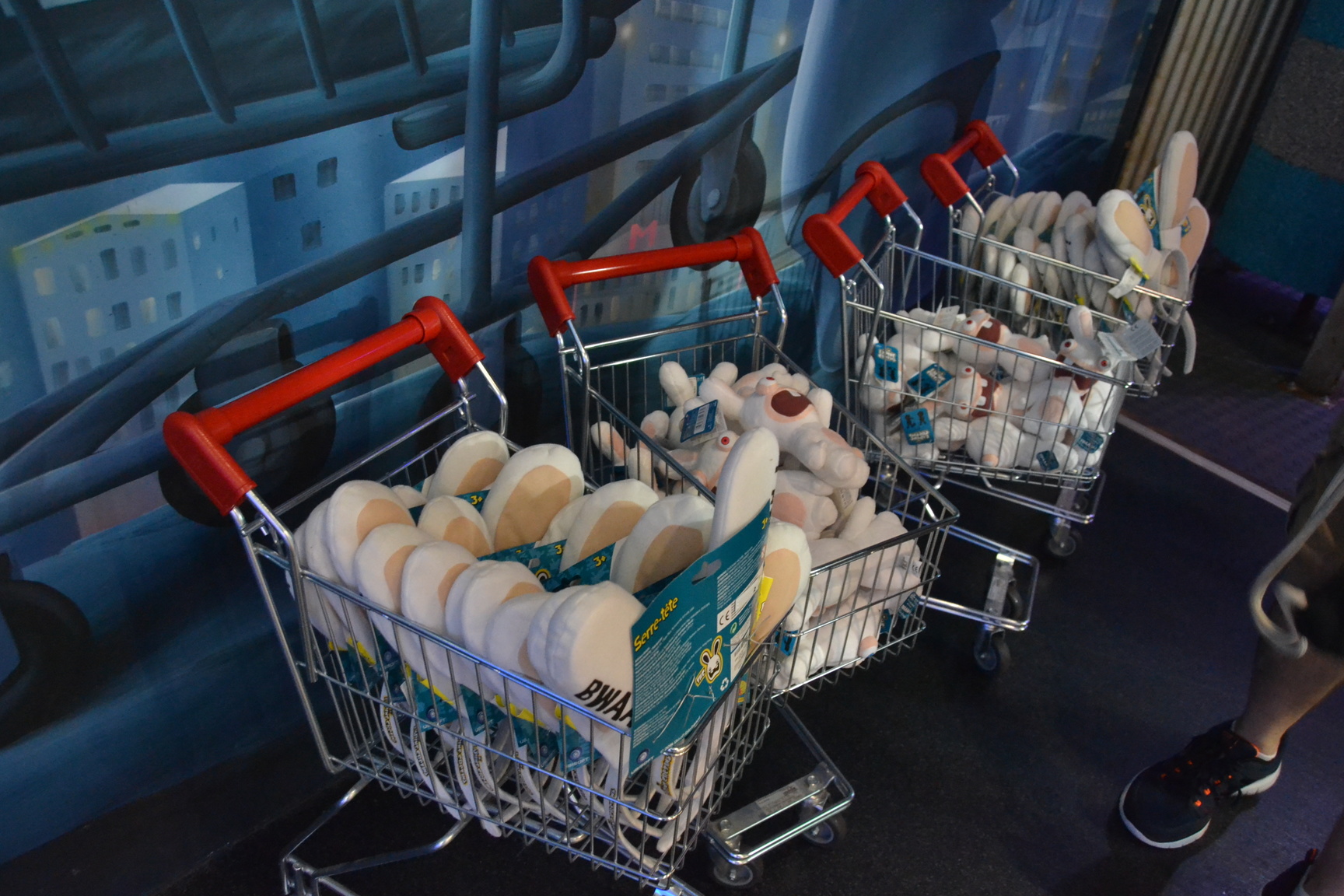 Futuroscope’s 2014 addition was the biggest surprise of the park’s history, as it’s an unique ride, totally original and with a humour that can only be attributed to the Rabbids! With excellent, well-executed theming, and a ride system (albeit reused from a previous ride), but still really fresh, La machine à voyager dans le temps is a must ride when you visit Futuroscope. It was one of our favourite rides at the park, and it’s definitely worth planning a trip to Futuroscope in order to ride it (as well, of course, as the other amazing rides). We loved it! 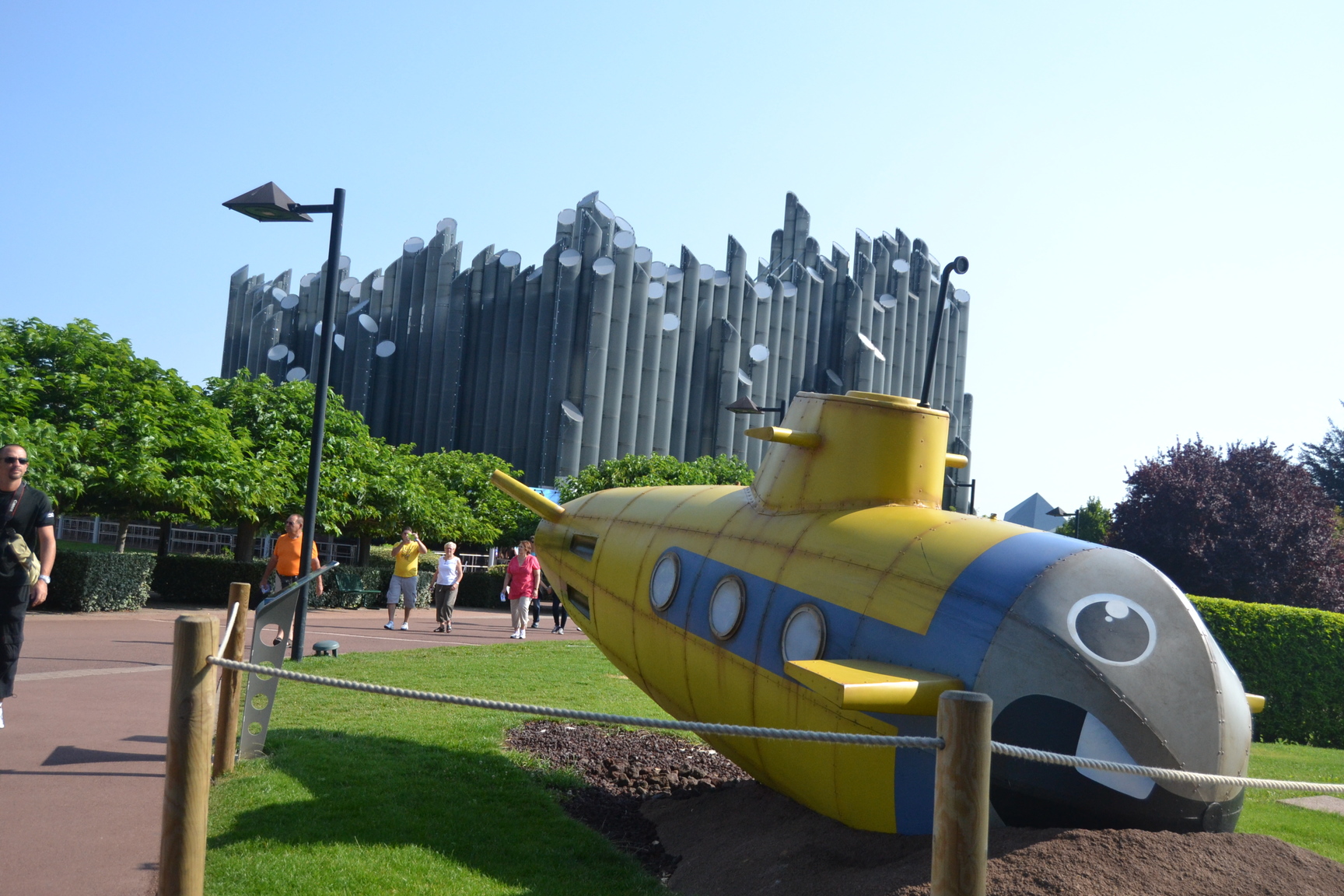 Thank you very much for reading this Ride Review of La machine à voyager dans le temps at Futuroscope. Please keep in mind, all images found on this site, unless otherwise stated, are owned by Coaster Kings! Sharing them is fine, but only if credit to thecoasterkings.com is given!