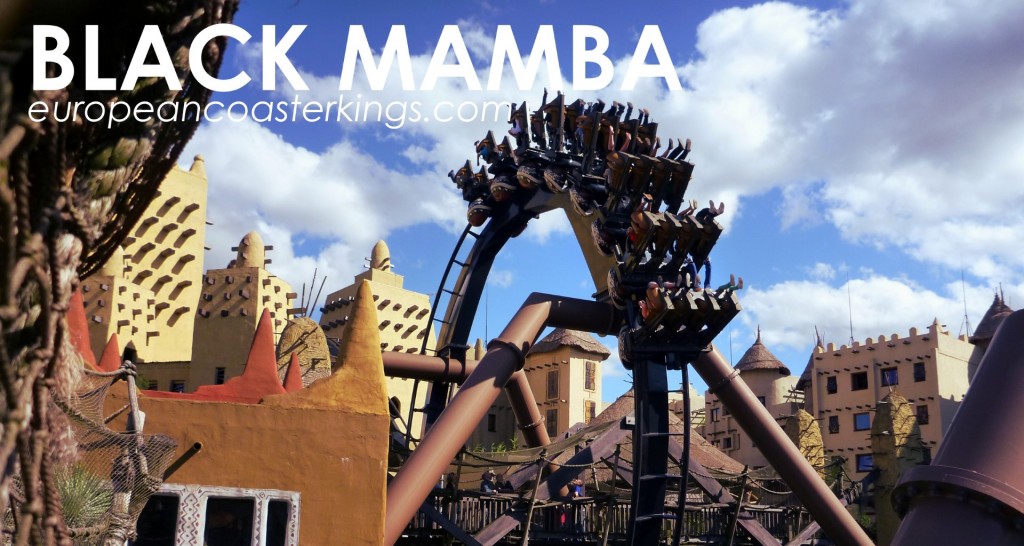 When entering the park via the main entrance, the first ride you see is the double-floored carousel. Just take a right from here, into ‘Deep in Africa’. You cannot miss it due to the hotel Matamba that’s immediately in plain sight on that side. Cross the bridge (under which a hidden road passes through the park!) and you end up in the African themed area. Follow the path and you might hear it already… All of a sudden, Black Mamba passes by like a real predator that pops out of nowhere. You arrive at a junction and on the corner, the entrance of the coaster is waiting for you. What you have to know about Phantasialand is that they haven’t got a lot of space. But the way they built their rides on the limited piece of land that they have, is incredible. Rides are built on top of each other, they work on different levels of elevation when it comes to paths and occasionally you really need your park map to find a ride entrance. Keep in mind that the paths can be very steep as well, so make sure you have good walking shoes! 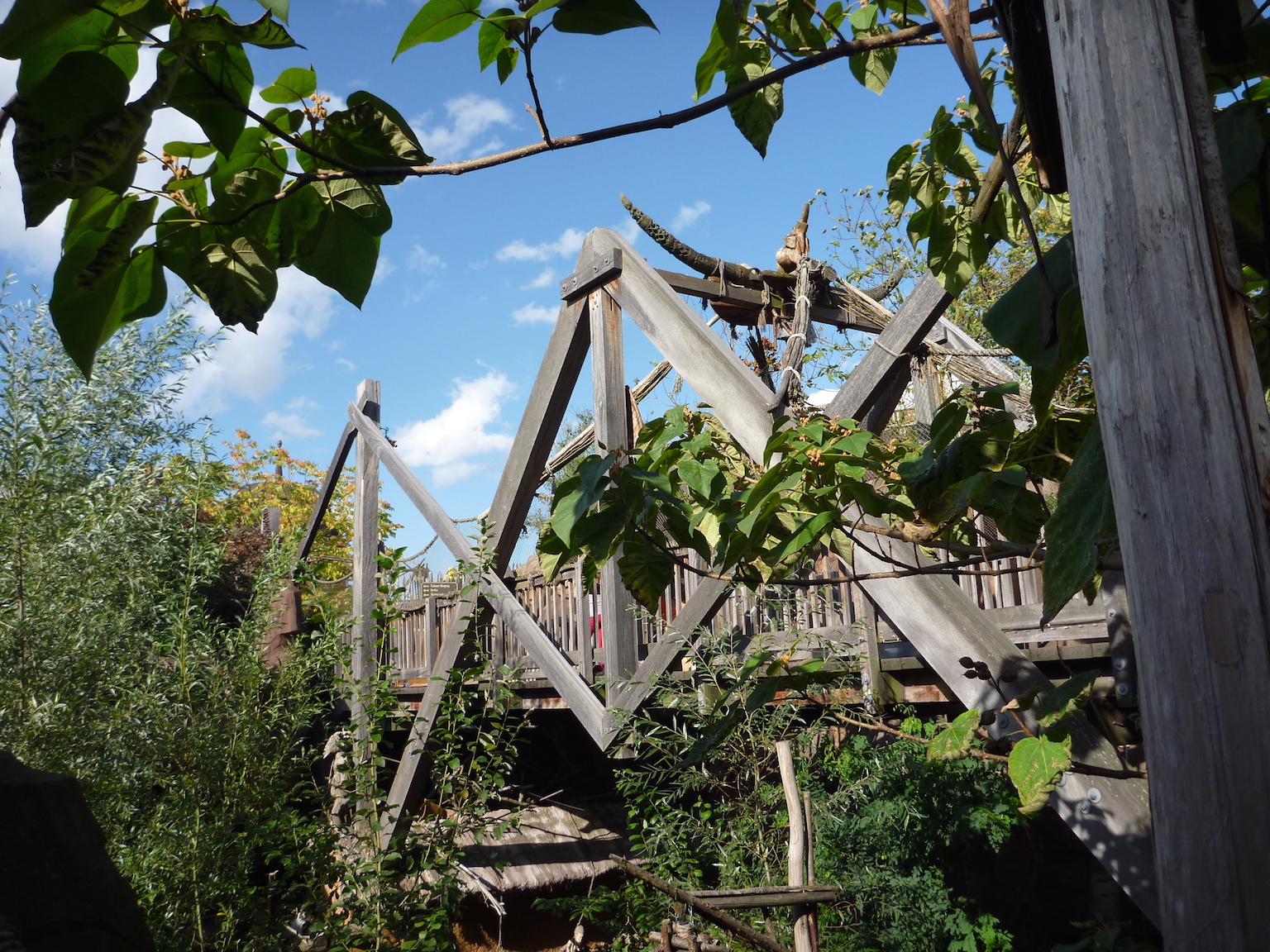 When stepping in the queue, get ready to take some stairs as it is completely integrated in the area. From time to time, you hear the black monster zooming by to get fully excited. You walk in the typically African themed buildings, cross a wooden bridge and go down passed a waterfall to a point where the queue splits. (Cool fact: the park hired African tribes to create all the decorations in the area!) Once the queue splits, it’s time to choose between first row and the other rows. Go right if it is your first time, since personally, it is the best experience. You might have to wait a bit extra depending on how busy it is in the park, but it’s worth it. If you return for a second time and you really want to feel the force of the coaster, then go left to one of the last rows. You cannot really see the station from any side in the park or queue, but as you follow the path, you hear the clicking of restraints. As you go inside, you enter a kind of cave with beautifully decorated African spikes.
Are those bats that you hear on the ceiling? Looking down again, you can see one of the two trains, which has eight cars and four seats in a row. This is the time to get really excited as each time the train leaves, African drums start playing and the area gets dark. When it’s finally your time to go, get ready for the venom of Black Mamba! 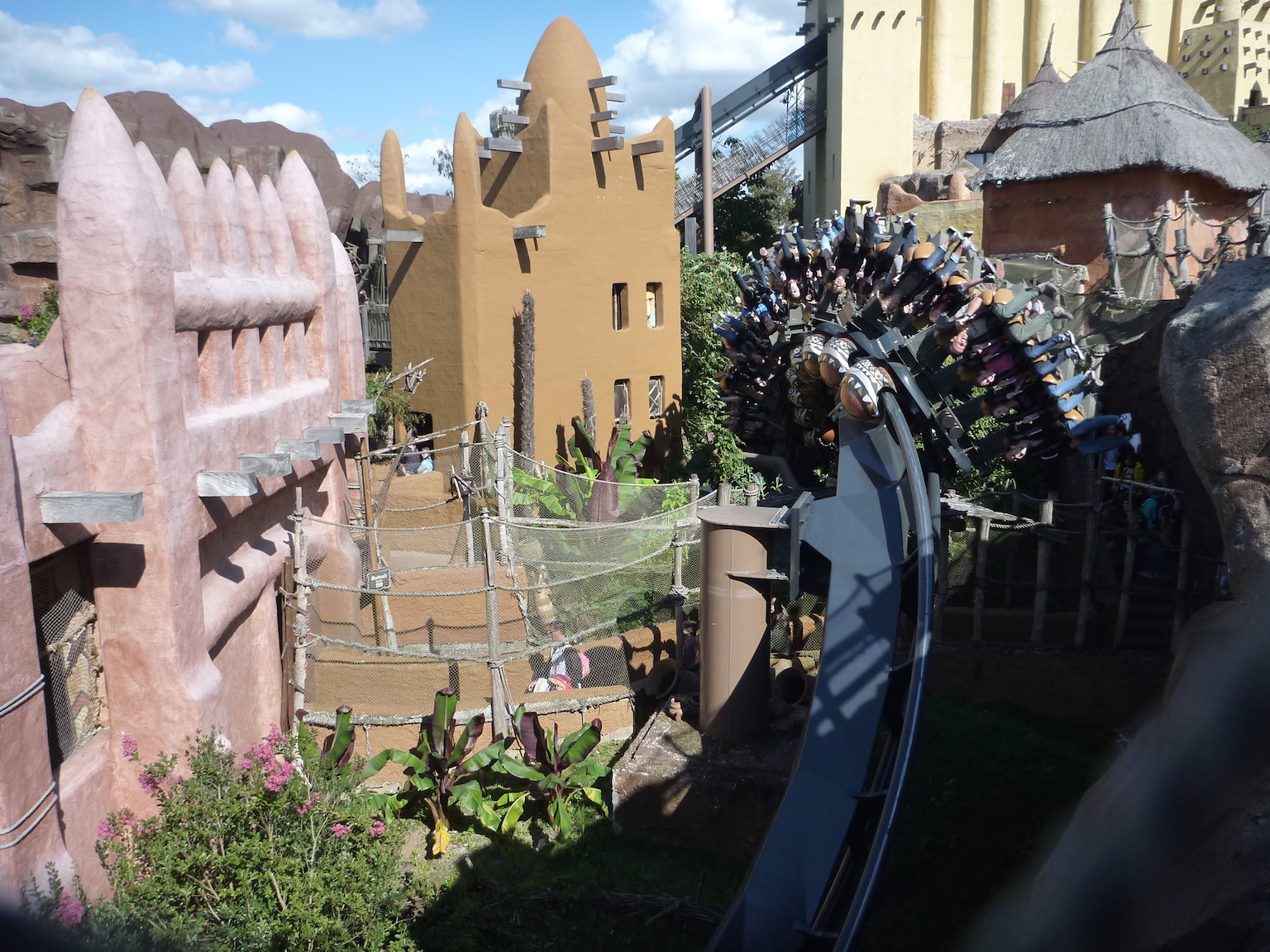 The drums start playing for you and as you move forward, the train goes right up on the lift hill. Here you are outside again and you’re moving up to the tower building. Don’t you just love the sound of anti-rollback? Inside, you see bones everywhere, the sound of the drums is back and you’re moving faster and faster until it unleashes its fury. You dive down after a small Pre-Drop into a 65.6 feet (20 m) tall Looping. Now the other elements will follow fast as next up you go towards the Zero-G Roll. Don’t think that you have time to recover, as you dive while passing a waterfall into a tunnel. It leads right into an Inclined Immelman almost immediately, which is a Black Mamba exclusive element. By this time, you totally lost your sense of direction and that’s one of the unique elements of Black Mamba. Another strength of the coaster is that you are almost able to touch the rockwork as the track is so well built into the environment. The coaster continues and after another tunnel, the first Corkscrew turns you upside down again. After two bents left, another Corkscrew awaits. Now you continue with a Horseshoe as you pass by the queue and go from one turn to another. A helix makes your legs and feet feel numb essentially. The final helix is followed by the brakes. Everything is black in front of your eyes. Is it due to the g-forces or just because you end up in the dark cave again? I can never tell! You return to the station with the feeling of being bitten by a snake and now a steep hill upwards back to the park that awaits you… Once again, welcome to Phantasialand! 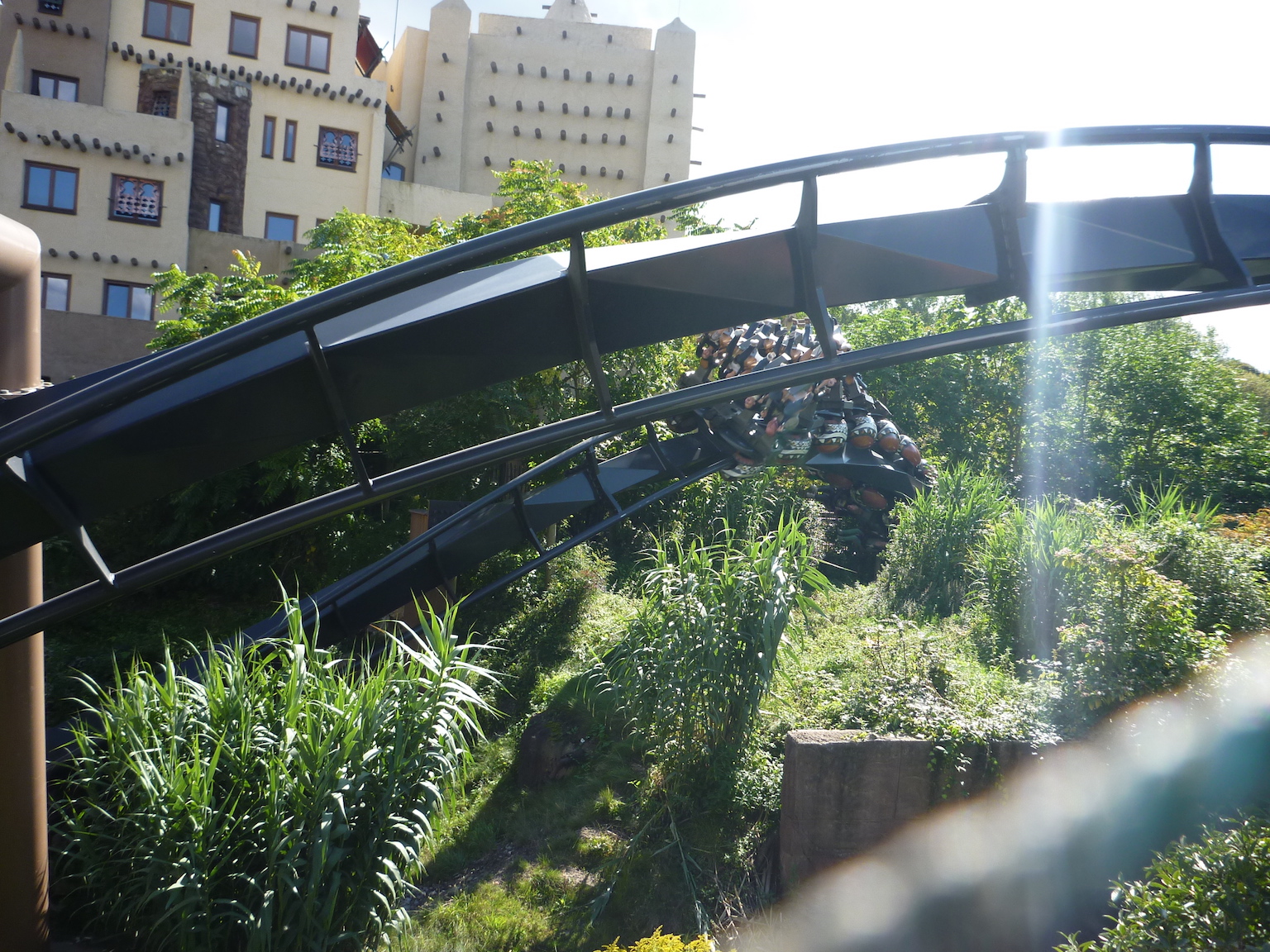 Black Mamba opened in 2006 and had a budget of 22 million euros (24.8 million dollars)! The cost was 11 million euros for the track itself and an additional 11 million for the theming. At the same time they opened the Deep in Africa area, with Black Mamba being the only ride there. The Swiss constructor B&M used sand in the rails to reduce the sound that the coaster makes, which was essential since Hotel Matamba is very nearby. To ride Black Mamba, you need to be at least 4’ 7’’(1m40) tall and there is also a maximum limit of 6’ 5’’ (1m95). If you are older than 10 years old, you are good to go! In general, the waiting times are not too long, even though the ride is quite popular. Due to its majestic look, many doubt to go on. Next to that, the height limit makes it unavailable for quite some guests, and since the capacity is not bad either.. On busy days, it might be interesting to use the Quick Pass service, as Black Mamba is included. It’s about 15 euro (17 dollar) but know that you cannot use it for the first row! Guests that are too frightened by the snake, have other possibilities to enjoy the coaster. There is a walkway within the looping to wave at their family members on the coaster, which is a special entrance to Hotel Matamba. Fun fact: When walking in Deep in Africa, you might hear a special song that was made about the Black Mamba coaster and where its name is whispered… It is a funky dance song in 90’s style called: ‘Kamboleo (Drums of Africa)’. Listen to the hilarious song below!

So is it worth a trip to Brühl to ride Black Mamba? It most definitely is! For many fans in the region of the park, it has been their first B&M coaster and many fell in love in with the steel masterpiece. You have to have a good stomach though, since it is a pretty intense coaster with strong G-Forces. Fans of theming will love this one as well, as there aren’t many B&M coasters with this kind of decorations and integration in the area. Guests that are too afraid to ride it can experience it by seeing it pass by in the amazingly well-themed area. It truly is the icon of the park since 2006, but recently it got some competition of Chiapas and it will have some more later this year (2016) with the opening of Taron!

Thank you very much for reading this Ride Review of Black Mamba at Phantasialand. Please keep in mind, all images found on this site, unless otherwise stated, are owned by European Coaster Kings! Sharing them is fine, but only if credit to europeancoasterkings.com is given!