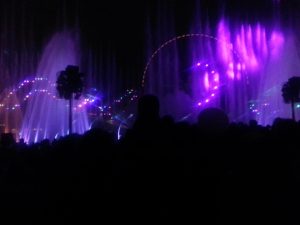 We’re finally back at the Disneyland Resort as the holiday season and crowds are over and done with. A lot has happened in both Disneyland and Disney California Adventure since we last had an official update so there’s a lot to cover!

With our visit coming on a rainy weekday with schools back in session, crowds were very light this week for the first time in a long time combine that with the inclement weather forcing some rides to close. To start off the day, a ride on Hyperspace Mountain was the first thing on the agenda. The ride seemed to creak and screech on some turns which seemed unusual compared to other recent rides, but otherwise all good when jumping to hyperspace. Tomorrowland updated the flags that depict the characters from Star Wars movies to include the most recent film, “Rogue One”. And it seems to be the Season of the Force once again! 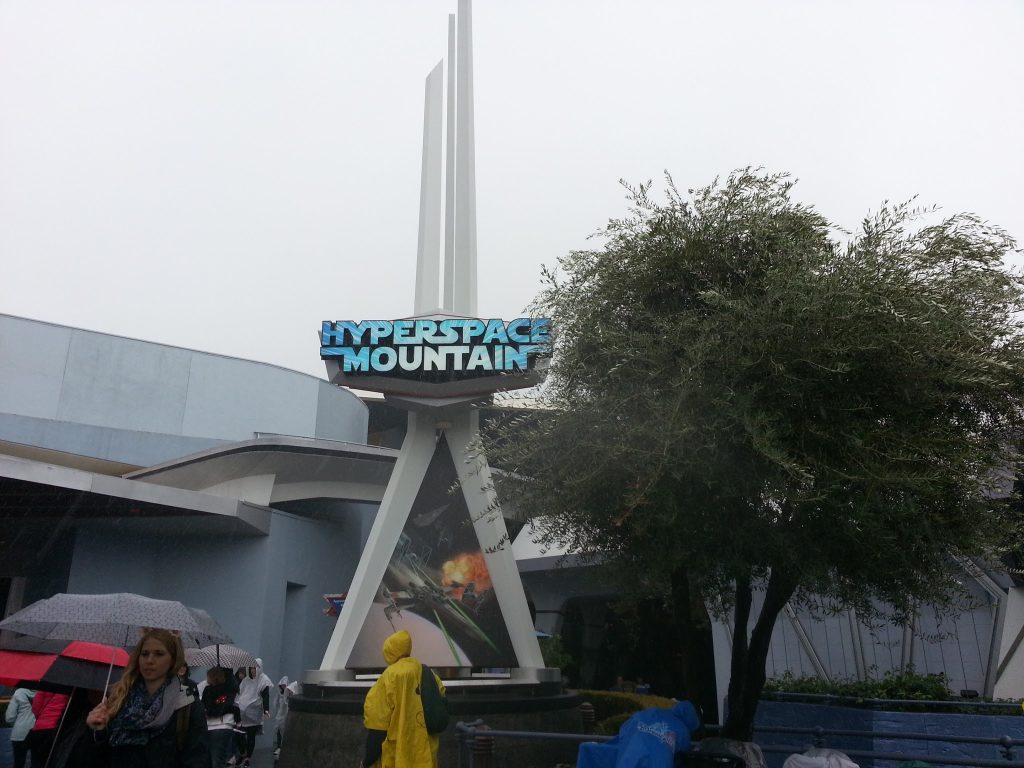 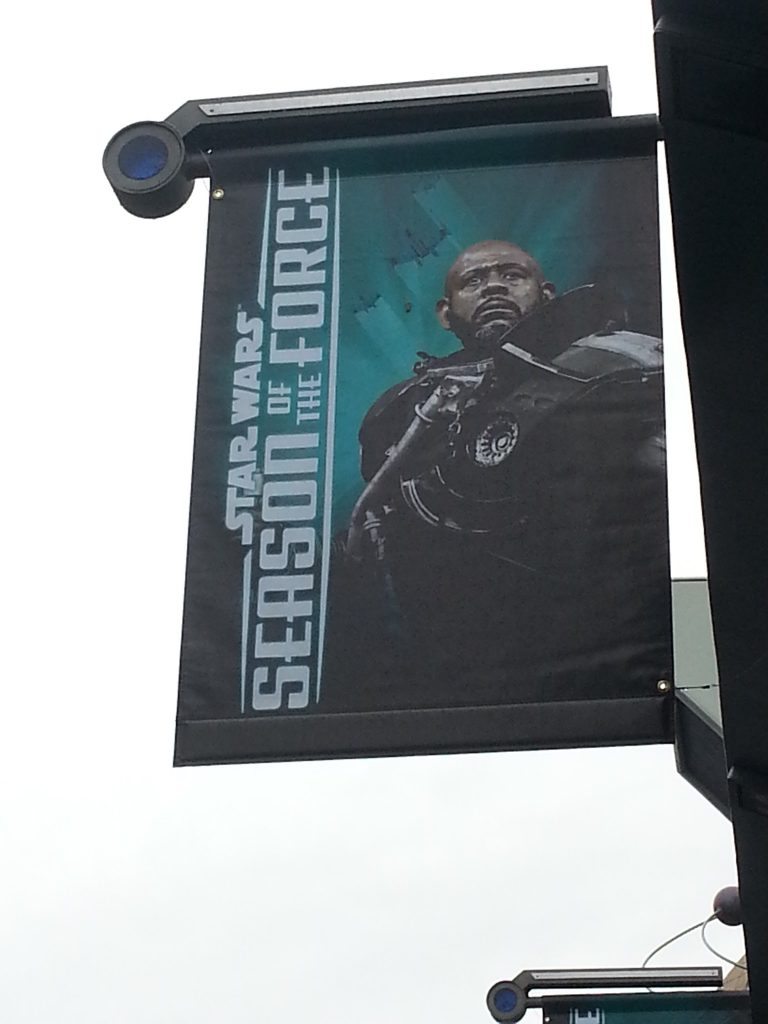 With the holiday season ending, the park was slowly weeding out the remaining decorations; however, there were still some areas aesthetically pleasing. 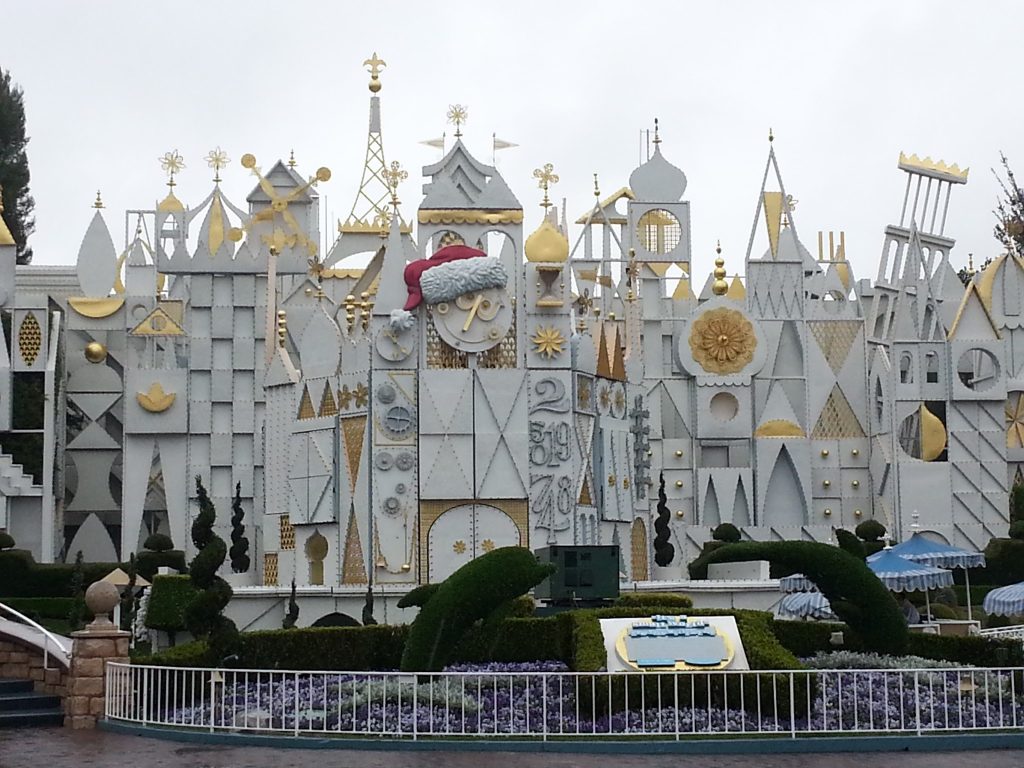 With the off-season for the Resort finally here, the annual refurbishments are already underway along with the other ongoing projects! First off, Haunted Mansion Holiday is transforming back into its usual ghostly presence as well as the Jingle Cruise returning into it the Jungle Cruise as usual. 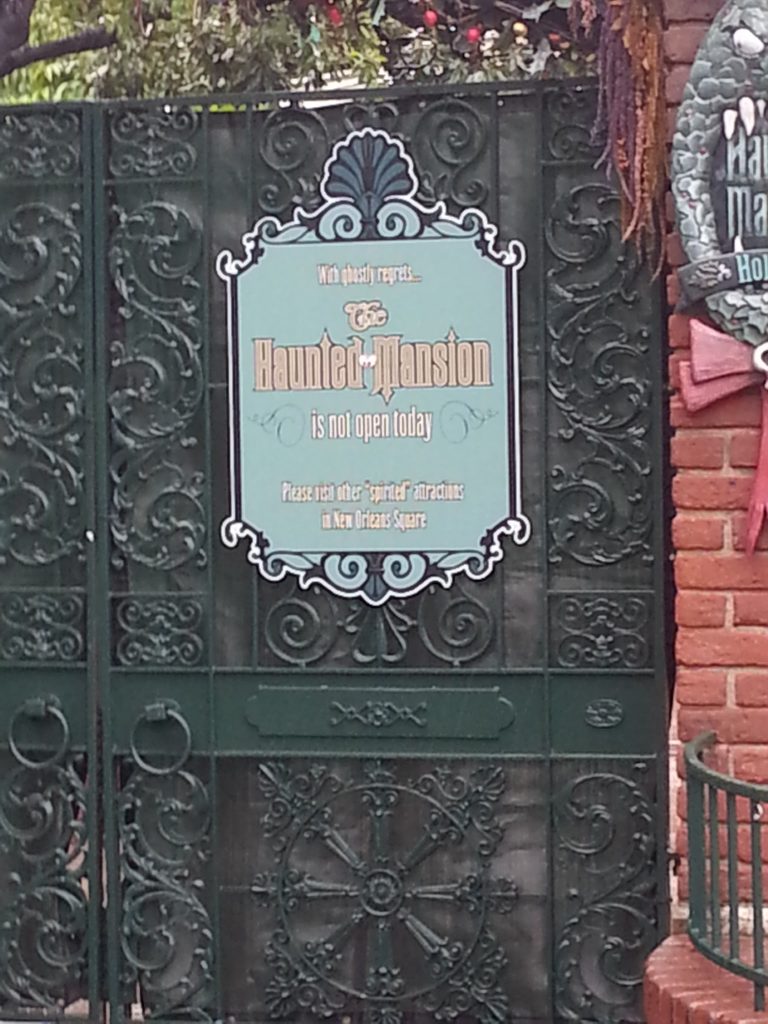 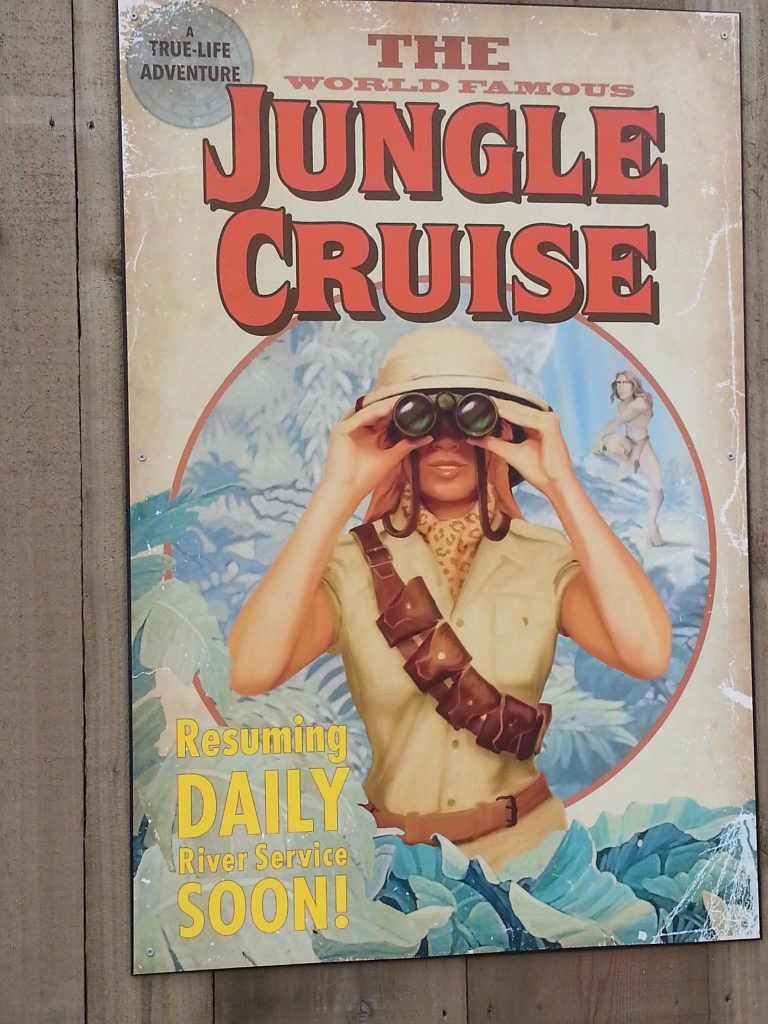 In addition, more refurbishments/enhancements to both DCA and Disneyland were noticeable as Grizzly River Run was not running due to the “park beautification in process” and the Adventureland restrooms were closed and covered up. The closure of these restrooms puts a long walk in between restrooms when walking up through the Adventureland and Frontierland parts of the park. 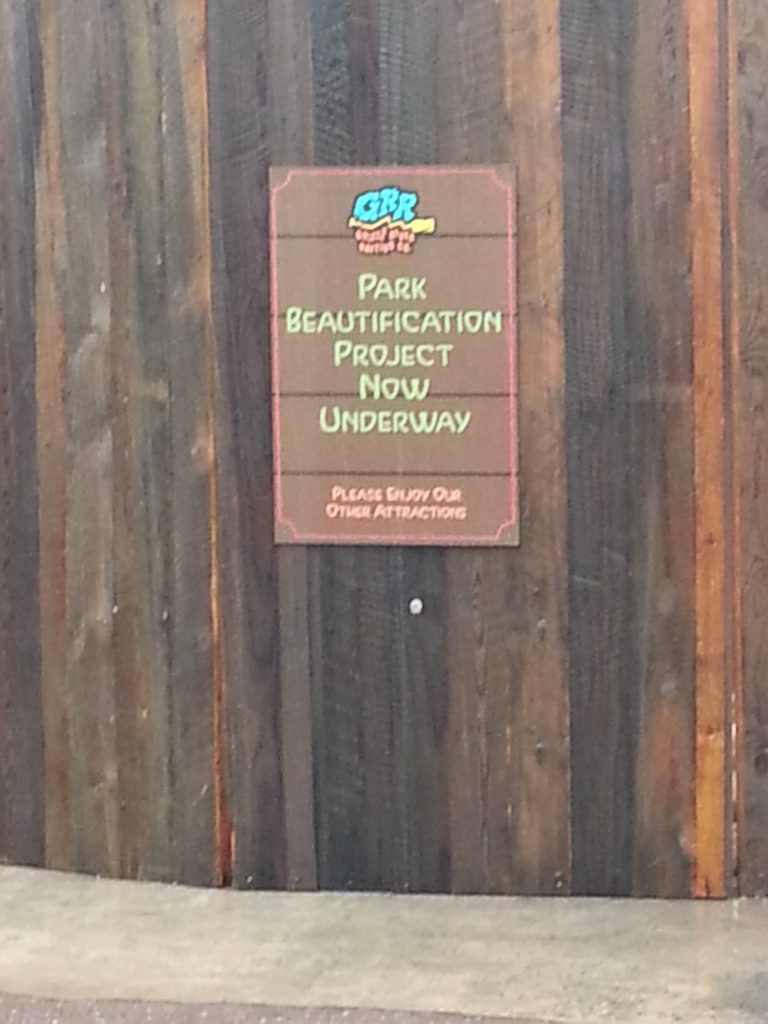 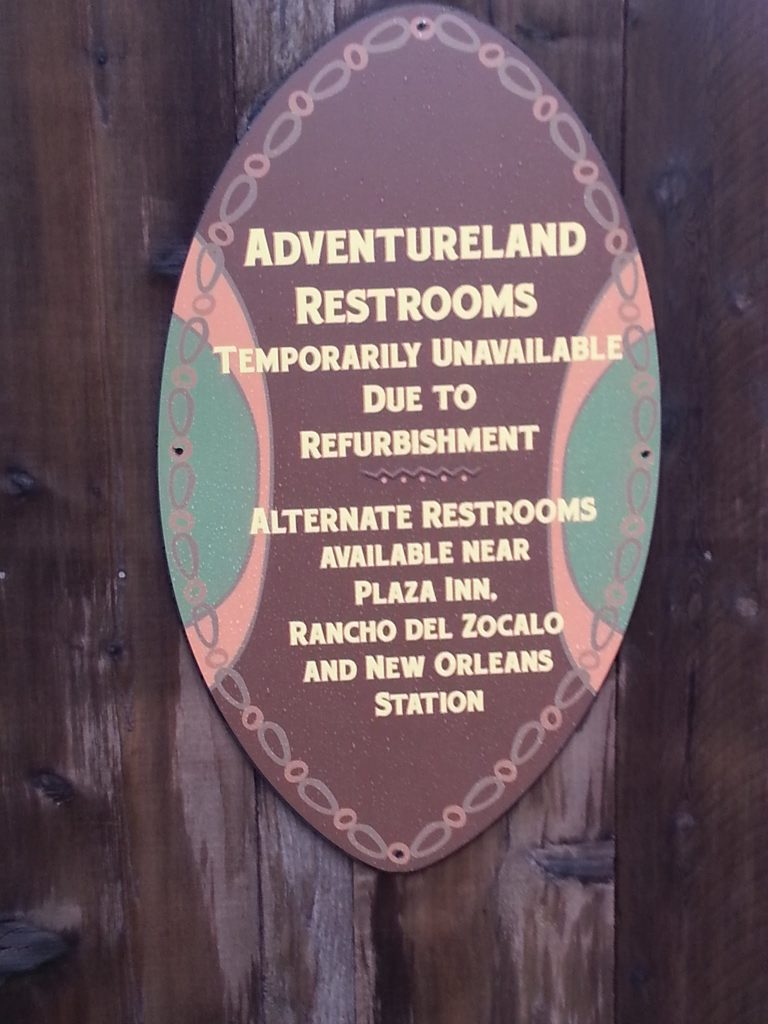 With the annual closures and current refurbishments out of the way, now it’s time to discuss new additions over the past year and current ongoing projects! We all know of the construction of Star Wars Land so we snapped a quick picture of the most anticipated area addition for sometime. Recently, Frozen premiered in the Hyperion Theatre, as you Frozen fans of course are well aware of! The Hollywood Tower Hotel (Tower of Terror) is no longer renting out rooms or giving thrilling elevator rides. The “California Adventure” part of the name in DCA took a hit as visitors must go Soarin’ Around the World instead of Over California.

First, we’ll discuss Frozen. Since the new production has premiered, there have been tweaks altering length and scenes in the show attempting minimize the technical difficulties (which we encountered during our most recent viewing of the show) and find the greatest entertainment value for all audiences to enjoy. 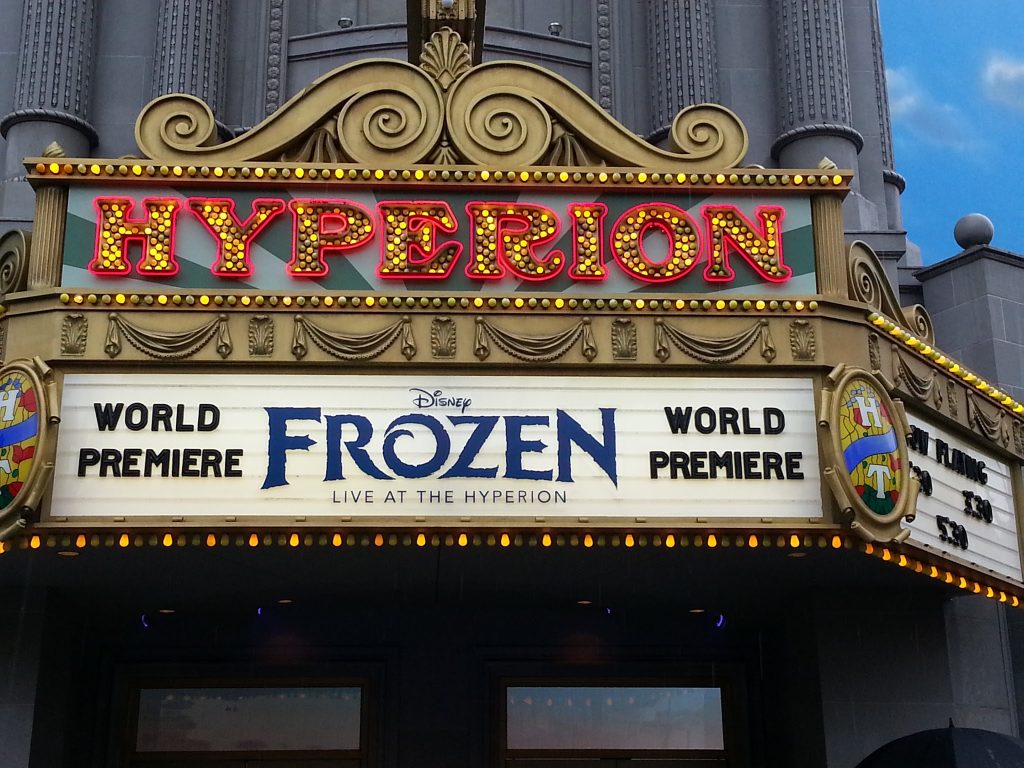 There are not as many Frozen shows daily as there were for Aladdin, but Frozen’s three shows a day limit confusion on show times. The show is a grand experience as the interior and staging of the theater had a great overhaul giving a new visual experience that Aladdin simply never provided. Although Frozen has no character equivalent to the Genie, the choreography and musical numbers are just outstanding. If anyone has any reservations about the Frozen overload or fatigue dare I say “let it go”! 🙂 This show is still in its infancy yet it is certainly a must see! 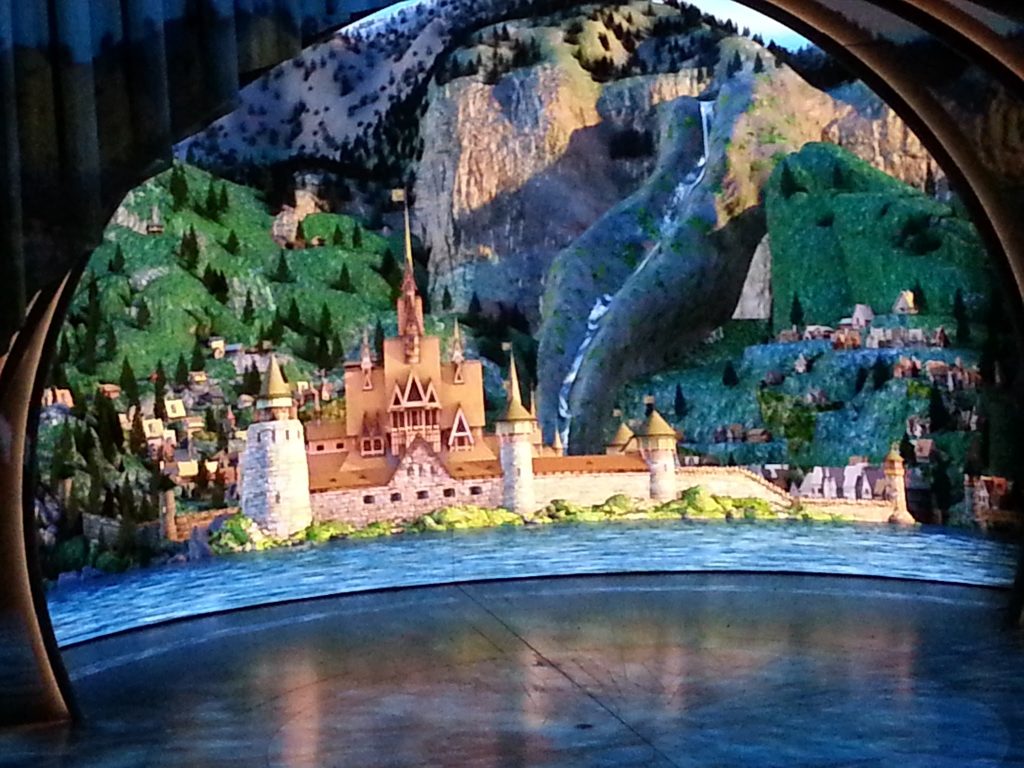 Now everyone raise their hand if they survived the Tower of Terror! (Raises hand). Sadly all mention of the Hollywood Tower Hotel or Tower of Terror have been removed from the building externally with the queue line and surrounding area blocked off from guests. 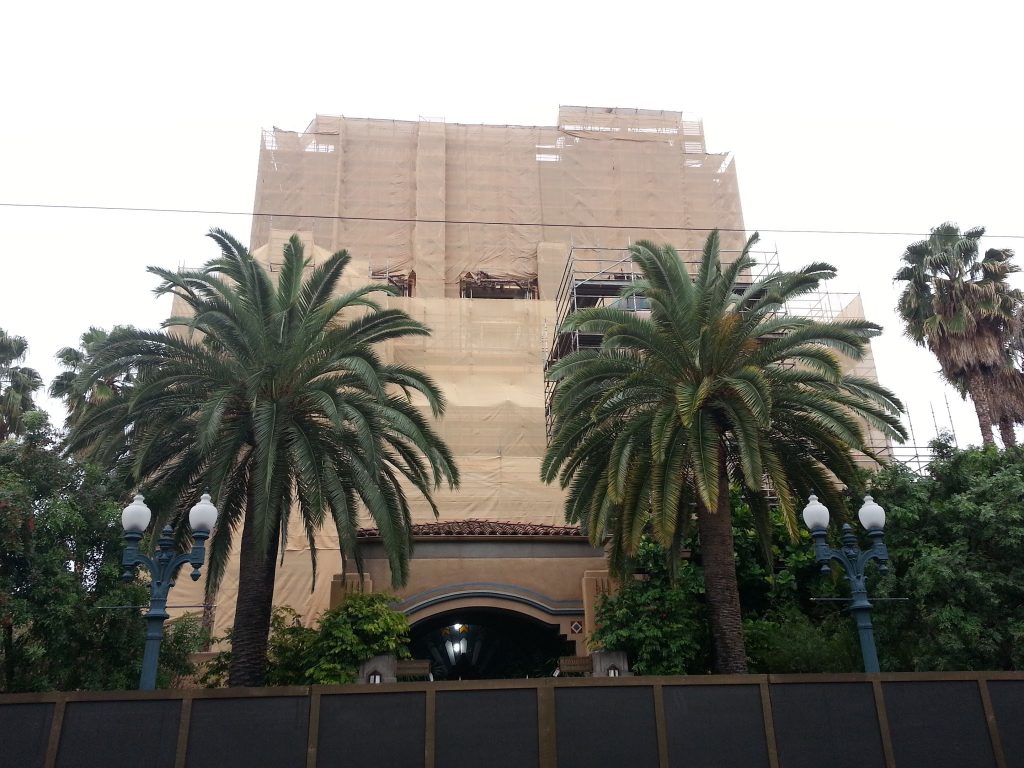 Tower of Terror is becoming a Guardians of the Galaxy experience. The name is Guardians of the Galaxy: Mission Breakout. No official opening date has been announced, but rumor central has it that the ride will not be open until the end of summer. Nonetheless, we are deeply saddened, but very excited for what is in store for our favorite tower. 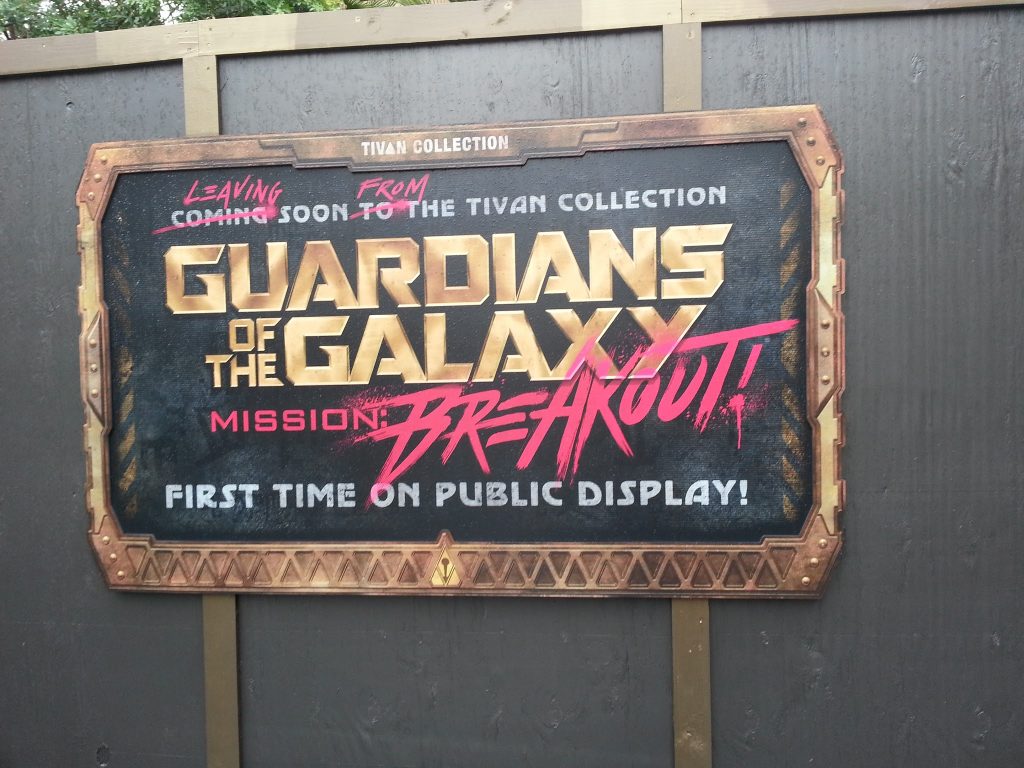 Eventually we found ourselves “outside of California” and Soarin’ Around the World. The visuals of this ride are amazing with the sights and smells breathtaking despite some complaints by guests of the CGI effects used in the ride. The ride is a definite success for now as it sports lengthy wait times and easily runs out of fastpasses early on in the day. 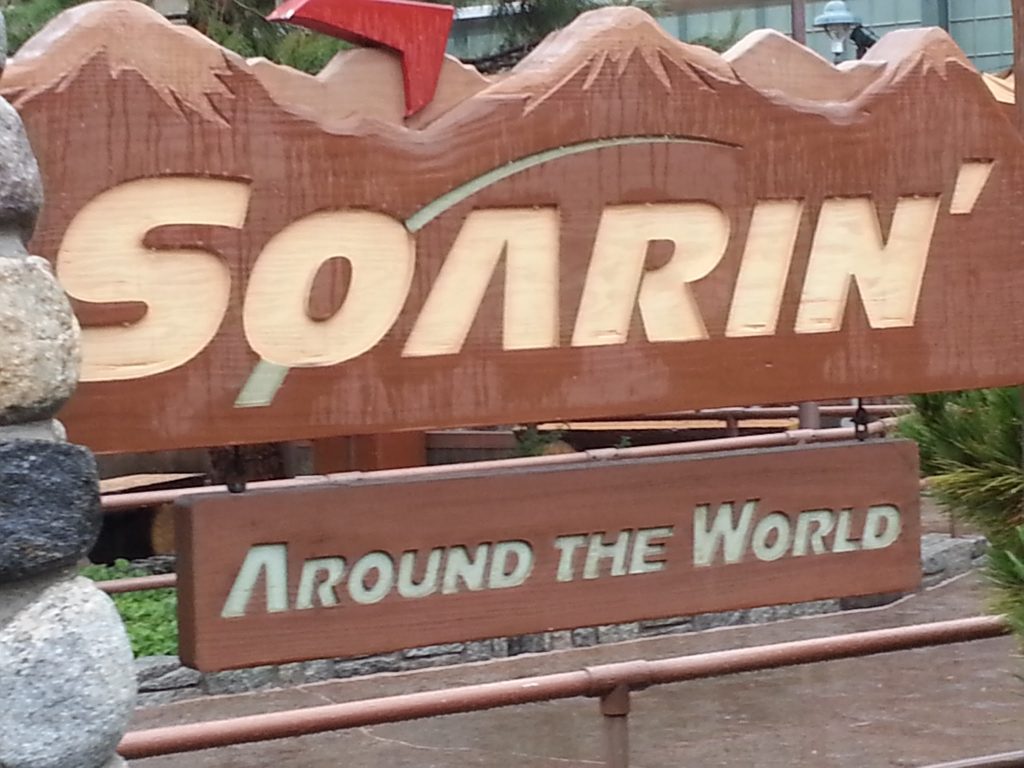 Prepare yourselves ladies and gentlemen for the most extraordinary picture yet…of dirt or in this case mud! ;D Our coverage and photos of Star Wars Land will start next visit and increase each visit over the year… so stay tuned! Plus the rumored opening date is expected now around 2019! 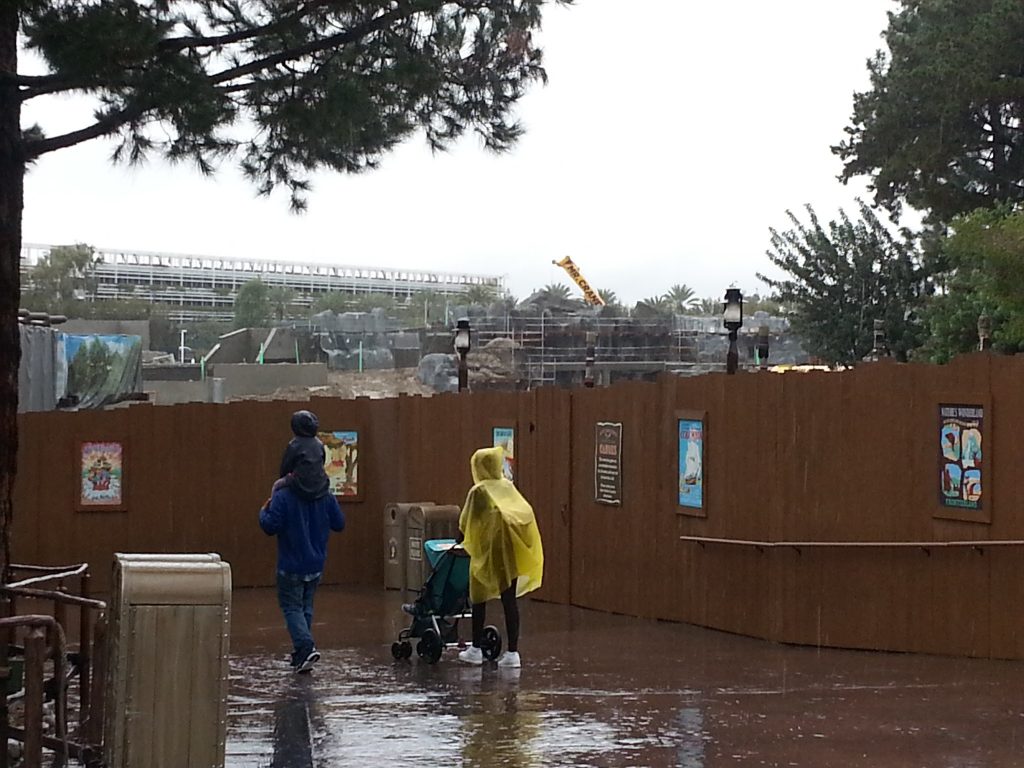 To wrap up our quick report, we also include recent announcements and upcoming events to look out for at the Disneyland Resort! Disneyland announced that both Toy Story Midway Mania and the Matterhorn Bobsleds will now give out fastpasses in addition to the new Maxpass. The Matterhorn and Toy Story MM are interesting additions for fastpasses so we shall see how wait times fluctuate once the first fastpasses are given out. As for the Maxpass, annual passholders have given mixed reviews on its ability to download pictures from the park despite already having the perk on their annual passes. The Maxpass shall start at a daily rate of $10 with a yearly rate on the way. 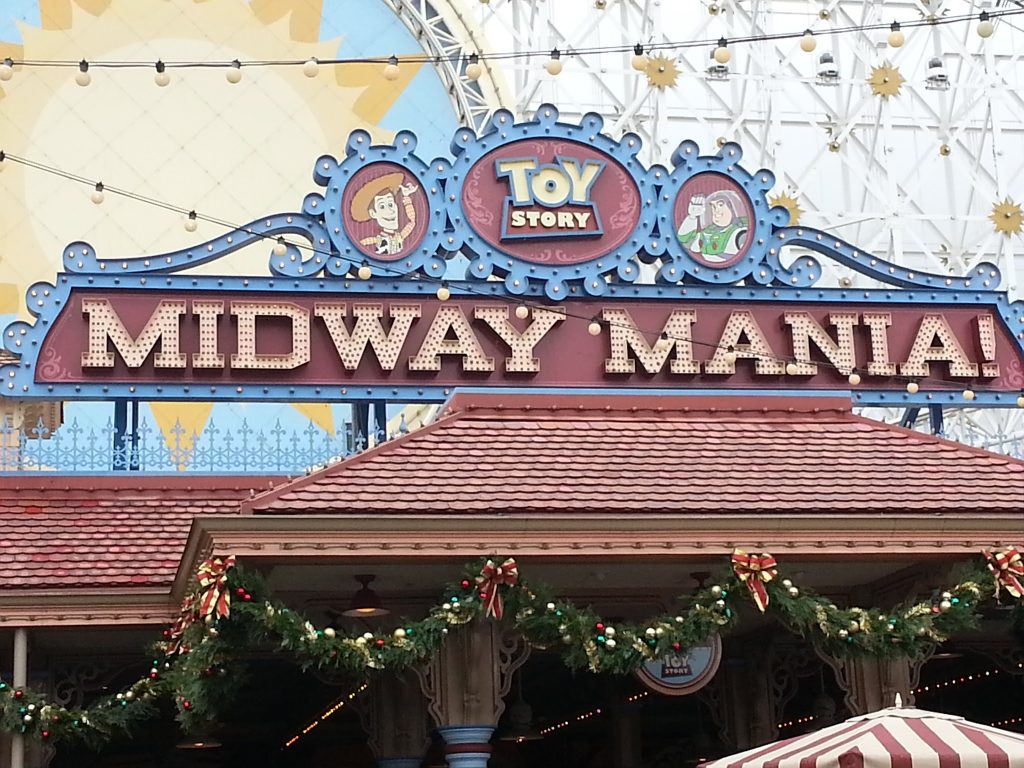 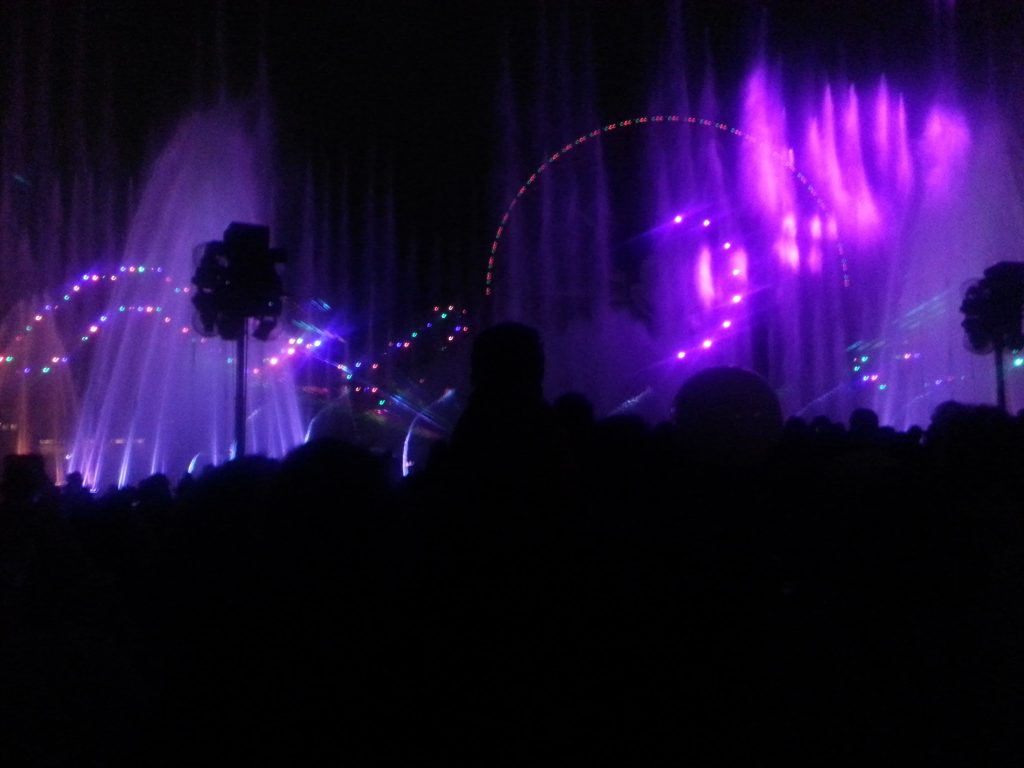 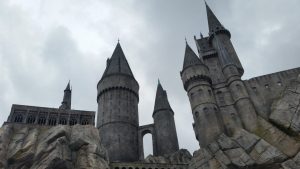 Thank you for checking out this Disneyland Resort Update! Make sure to check out our crowds and construction-filled Universal Studios Hollywood Update!