Alexander: Following our ideal Dollywood day, Sean and I popped over to nearby NASCAR Speed Park so that Sean could get a ride on the park’s resident coaster, Speedway Drift.

NASCAR Speed Park was so kind to host us during our visit (especially since it’s a very expensive coaster credit), but we have some concerns about the park’s future. We hope that, if nothing else, their good customer service can keep them afloat. 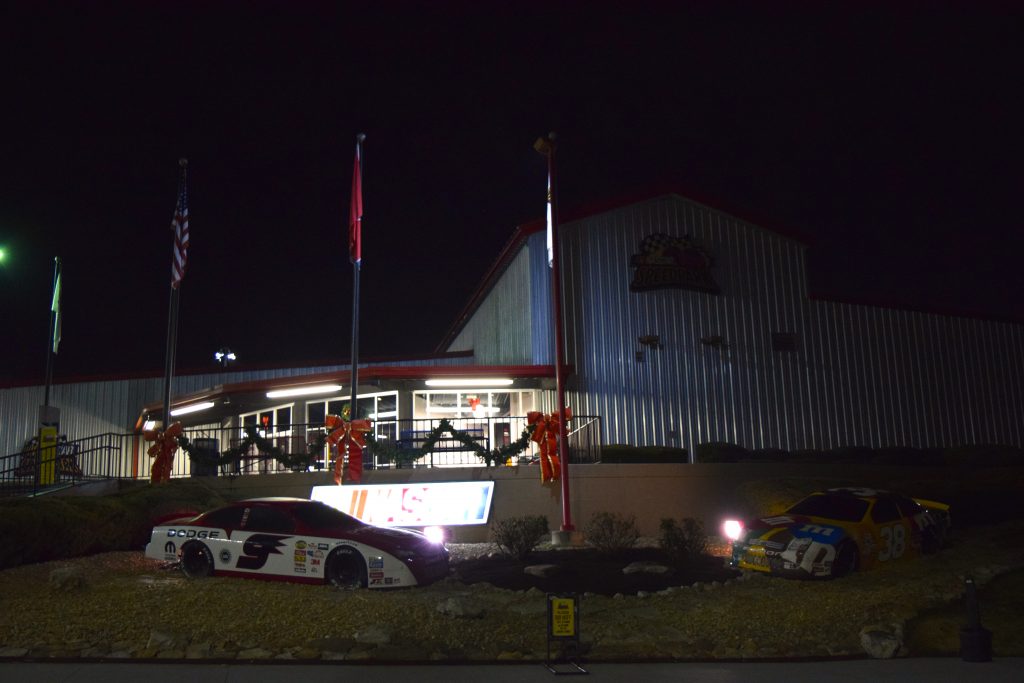 NASCAR Speed Park has some very accommodating operating hours; on peak days, the little go-kart park is open an hour before Dollywood and an hour after Dollywood close. 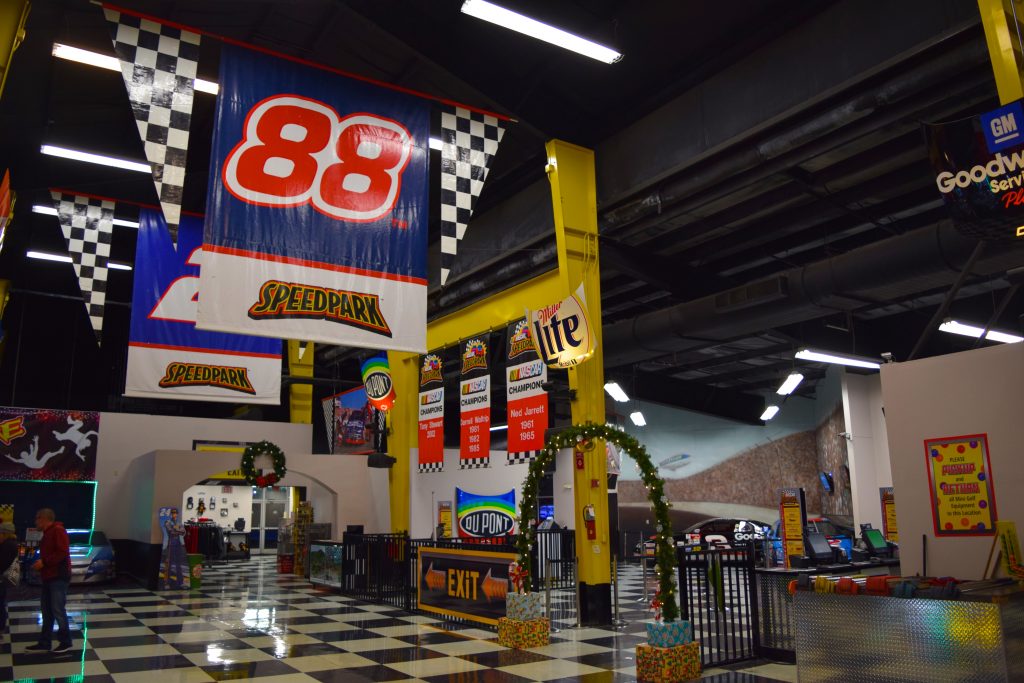 NASCAR entertainment facilities have had a mixed history of success (NASCAR Cafe, anyone), and Pigeon Forge’s NASCAR Speed Park is now the only such regional entertainment property of with NASCAR associations (Myrtle Beach operated a NASCAR Speed Park up until a few years ago; other locations, such as the Concord Mills North Carolina location, have merely dropped the NASCAR licensing). 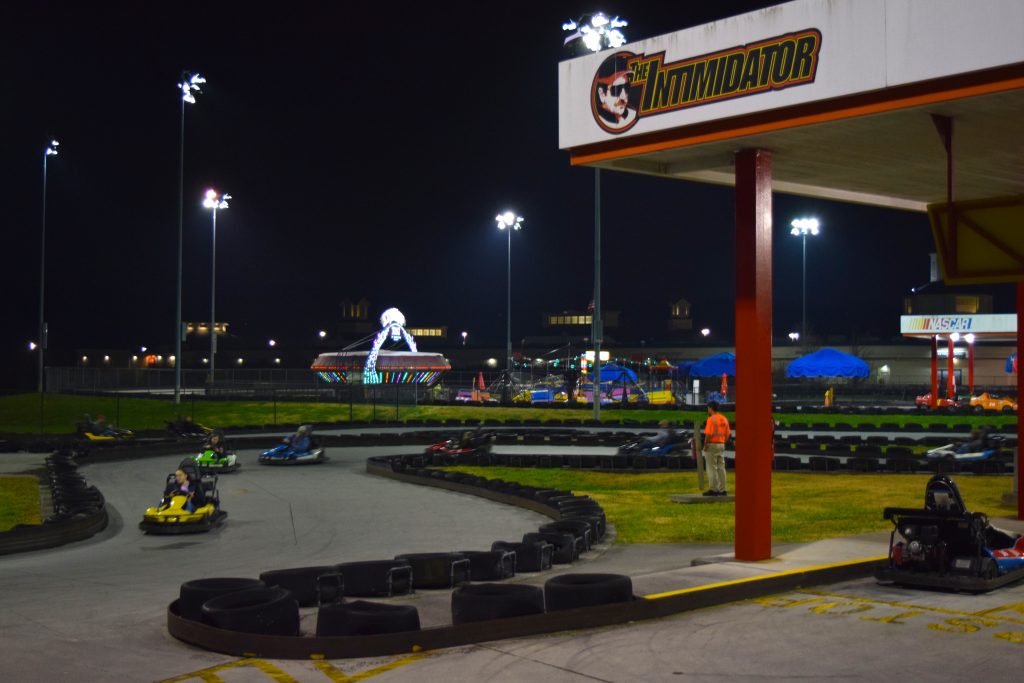 NASCAR Speed Park is an exceedingly late-90s concept; a massive arcade and 8 or 9 go-kart tracks designed to kill 3 or 4 hours in some of the South’s most tourist-y regions. Up until a few years ago, The Pigeon Forge location switched from pay-per-ride to pay-one-price ( making Speedway Drift a much more expensive venture); the success of this change appears varied at best. 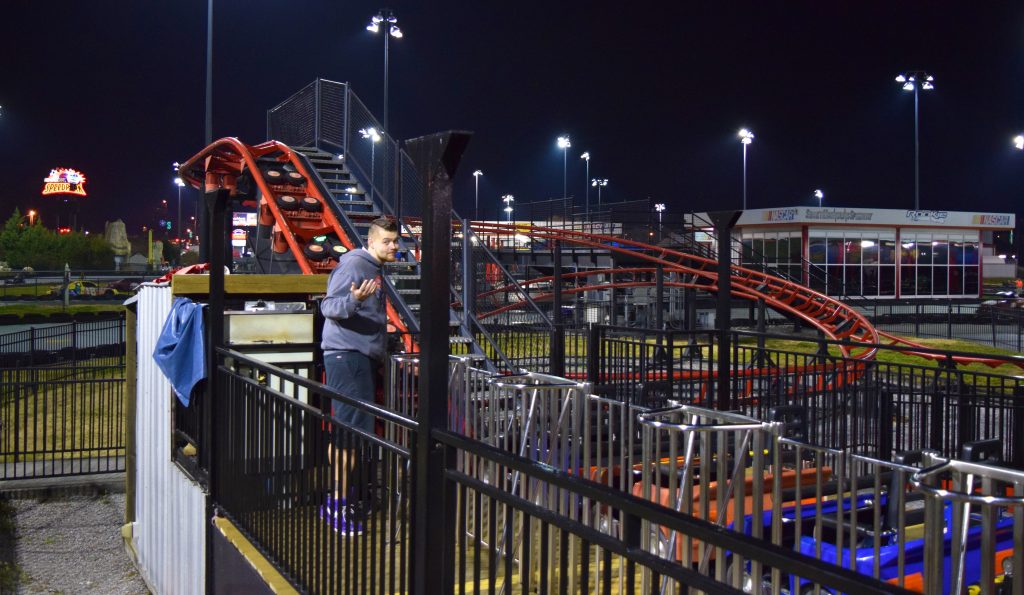 Sean and I made our way over to the bleak-looking rides midway to grab his coaster credit. We get to the station; no ride operator! A staff member walking the go-kart track that encircles the rides told us to go track down a ride operator; apparently things run on a skeleton crew around here, even on busy holiday weekends. 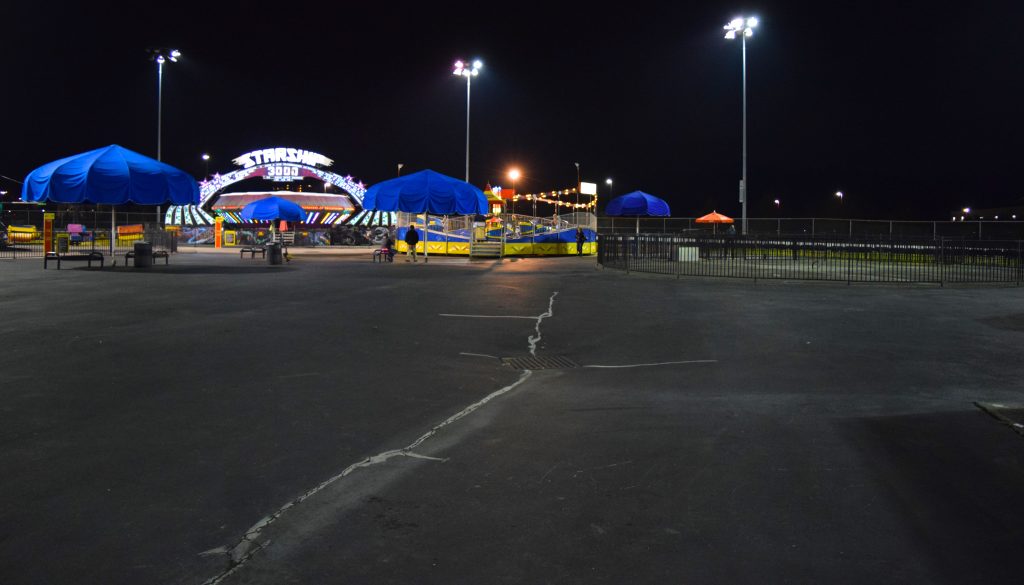 The over-large rides midway has seen better days. During a period of higher occupancy, a very cute NASCAR-themed Zamperla Rock n’ Tug operated here. Not sure what happened to it, but it seems a shame that a atmospherically relevant ride would disappear, only to be replaced with standard carnival faire. 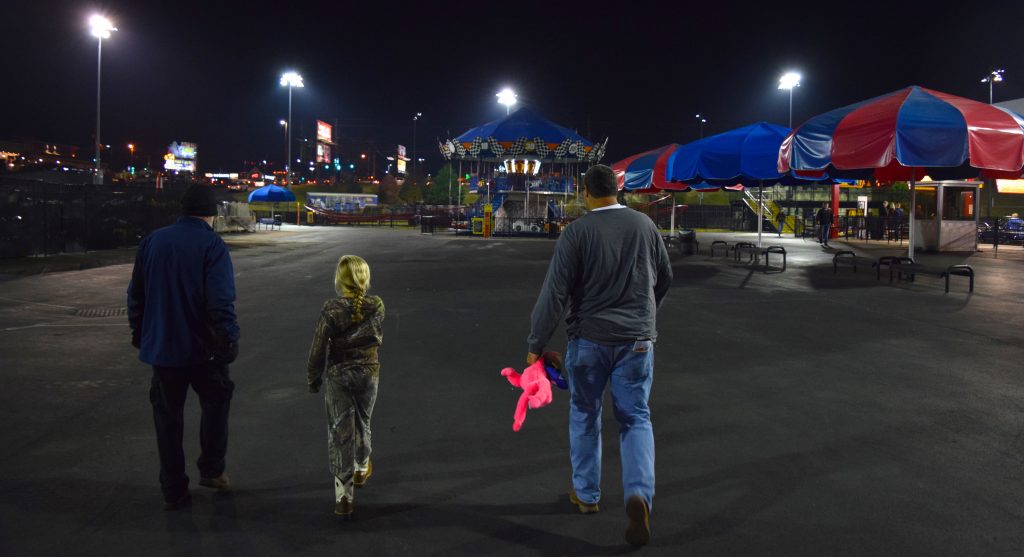 Once we found one of two ride operators on duty, he Pied Piper’d us to Speedway Drift. 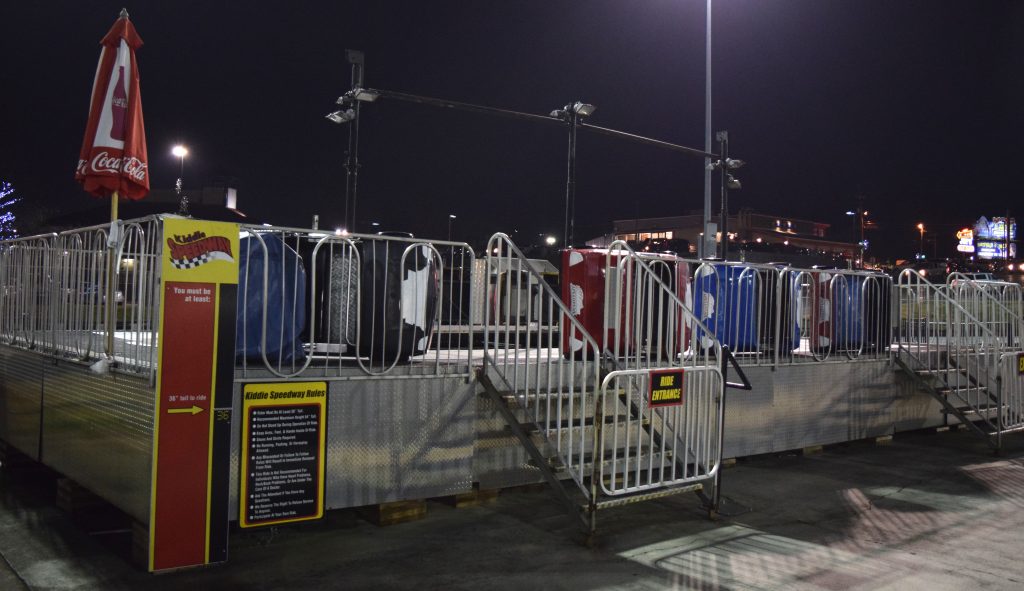 Another thematically accurate ride bites the dust; this stock car-themed kiddie Whip looks like it hasn’t been touched in a while (same goes for the park’s Scrambler, which is suffering from what look like years of neglect). 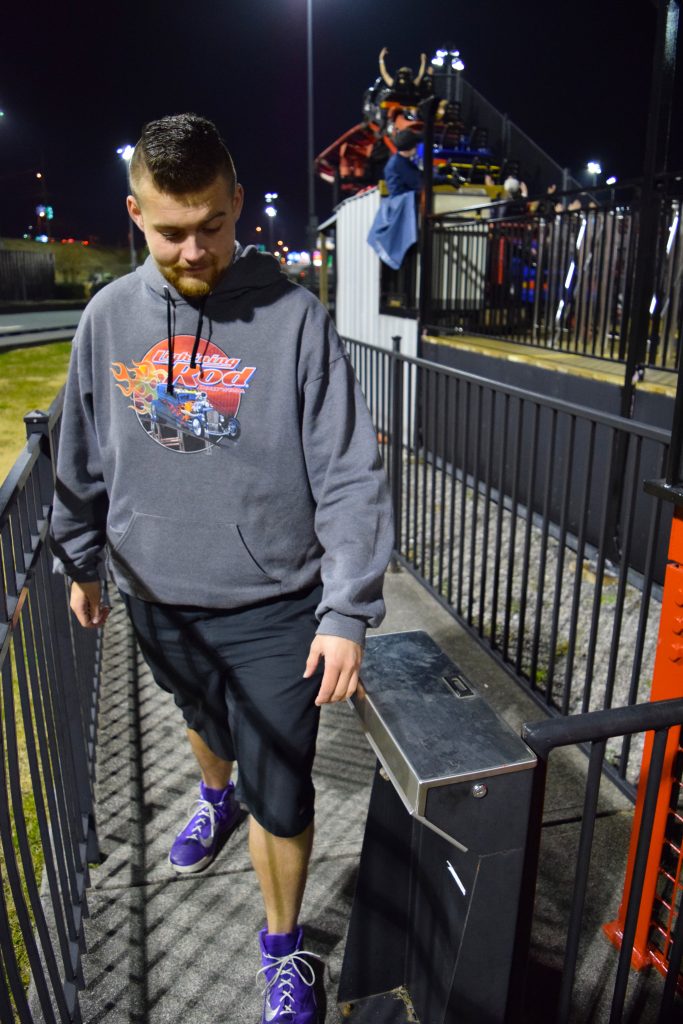 After being treated to 7 (!) on the rather pleasant Speedway Drift (A Zierer Force 1), we made sure to pass through the turnstile so that the park could properly document the ride’s attendance.

Just kidding. The turnstile is a lie. It’s merely the ghost of a turnstile that once was.

NASCAR Speed Park has so much potential, (especially in a region with such rapid growth as Seviere County), and customer reviews are largely positive, but I can’t help but feel the place isn’t what it could be. 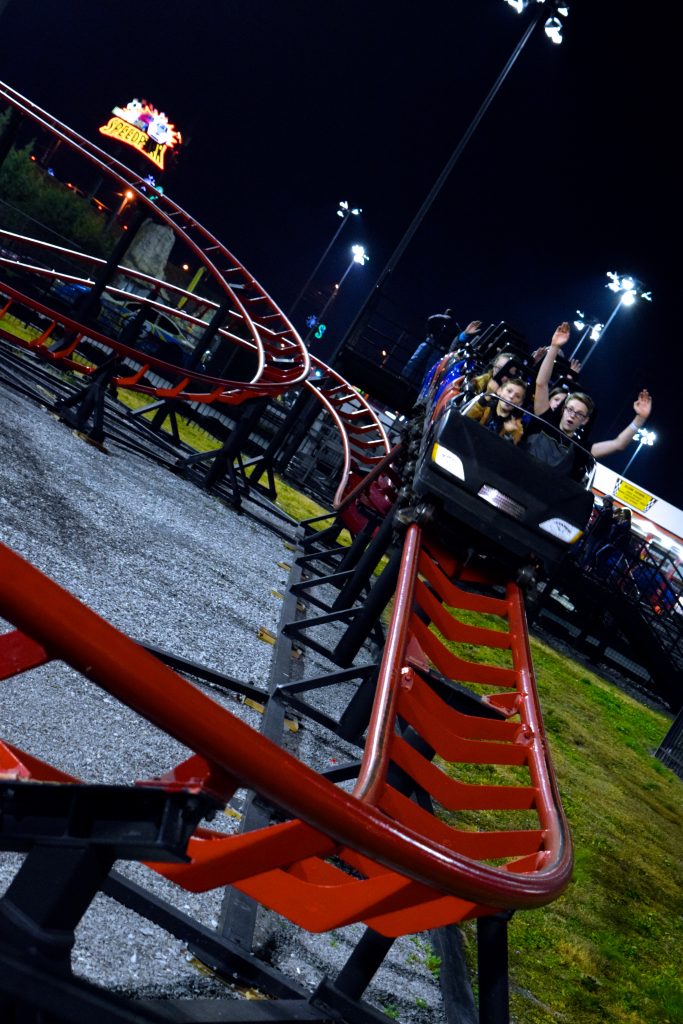 As we wade deeper in the era of the Mountain Coaster (The Great Smoky Mountain area welcomes their 6th Mountain Coaster later this year), venues like NASCAR Speed Park stands to gain if they expounded further on the region’s growing taste for thrills. 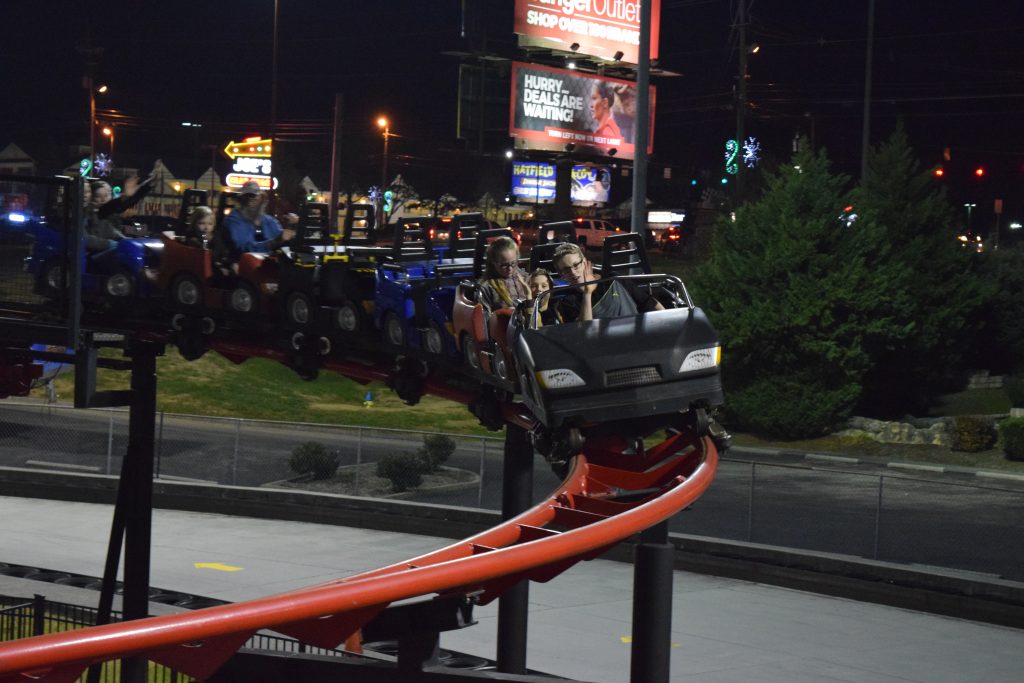 And with highly visible real estate along the area’s primary thoroughfare, I can only imagine what success would come by installing something compact, thrilling, and tall. 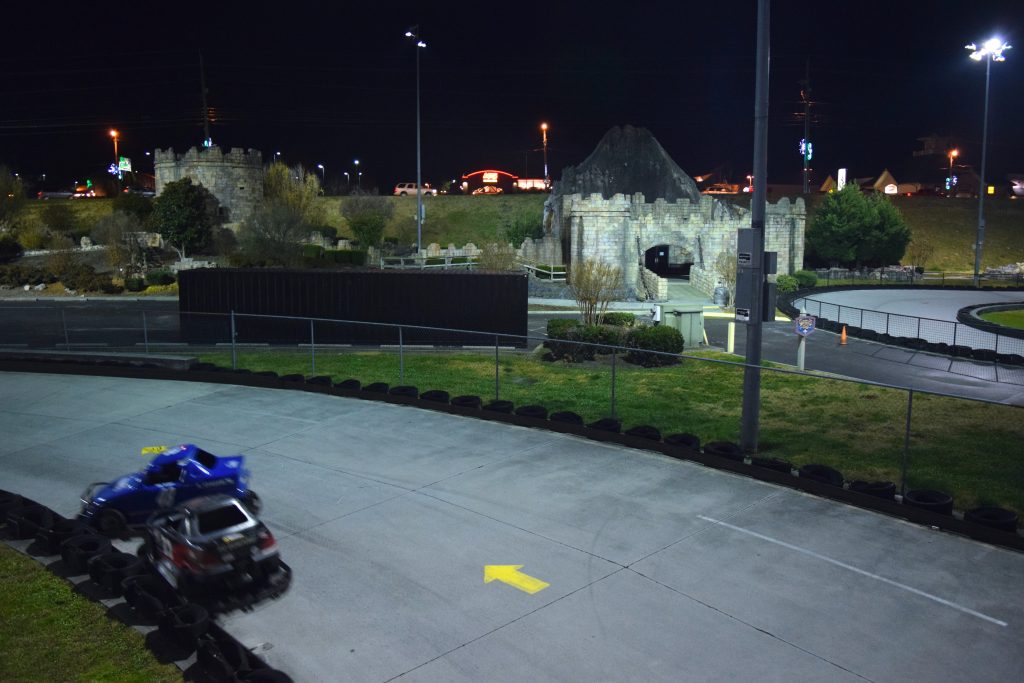 It wouldn’t need to be anything outlandish (Although the enthusiast in me sees a plot like Speed Park’s massive concrete midway and immediately thinks “PREMIER RIDES SKYROCKET II!”); for now it seems the karts and mini golf get the job done. 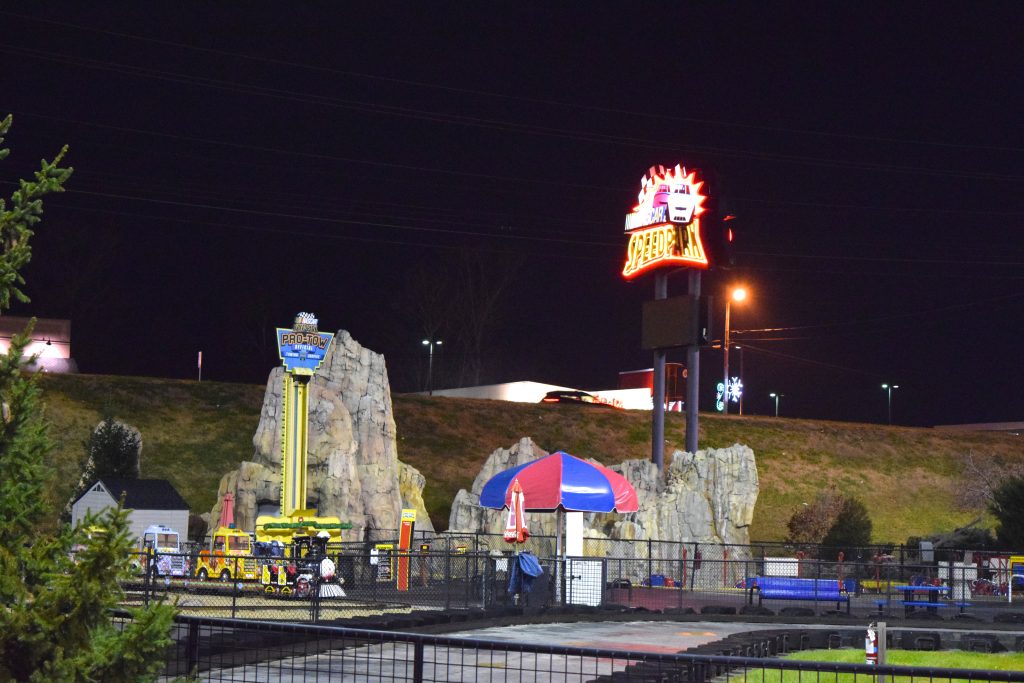 All I’m saying is, If NASCAR Speed Park decided it was time to hit a home run with something a little different *cough*skylineattractionsskywarp*cough*, you heard it here first. You listening, NASCAR Speed Park?

But what if it could be more?

Thank you for checking out this NASCAR SpeedPark report! Make sure to check out our awesome Dollywood’s Smoky Mountain Christmas report!