Knott’s Berry Farm reopened their hotel, and Randy from the FUNnelcake Blog was there to check it out!

“Stay where you play.” The Knott’s Berry Farm Hotel has always been a favorite place to spend the night. Back in March, the hotel closed for what we all thought would be just a few weeks. Well, five months later, guests are finally being welcomed back into the 320-room facility, just steps away from Knott’s front gate. 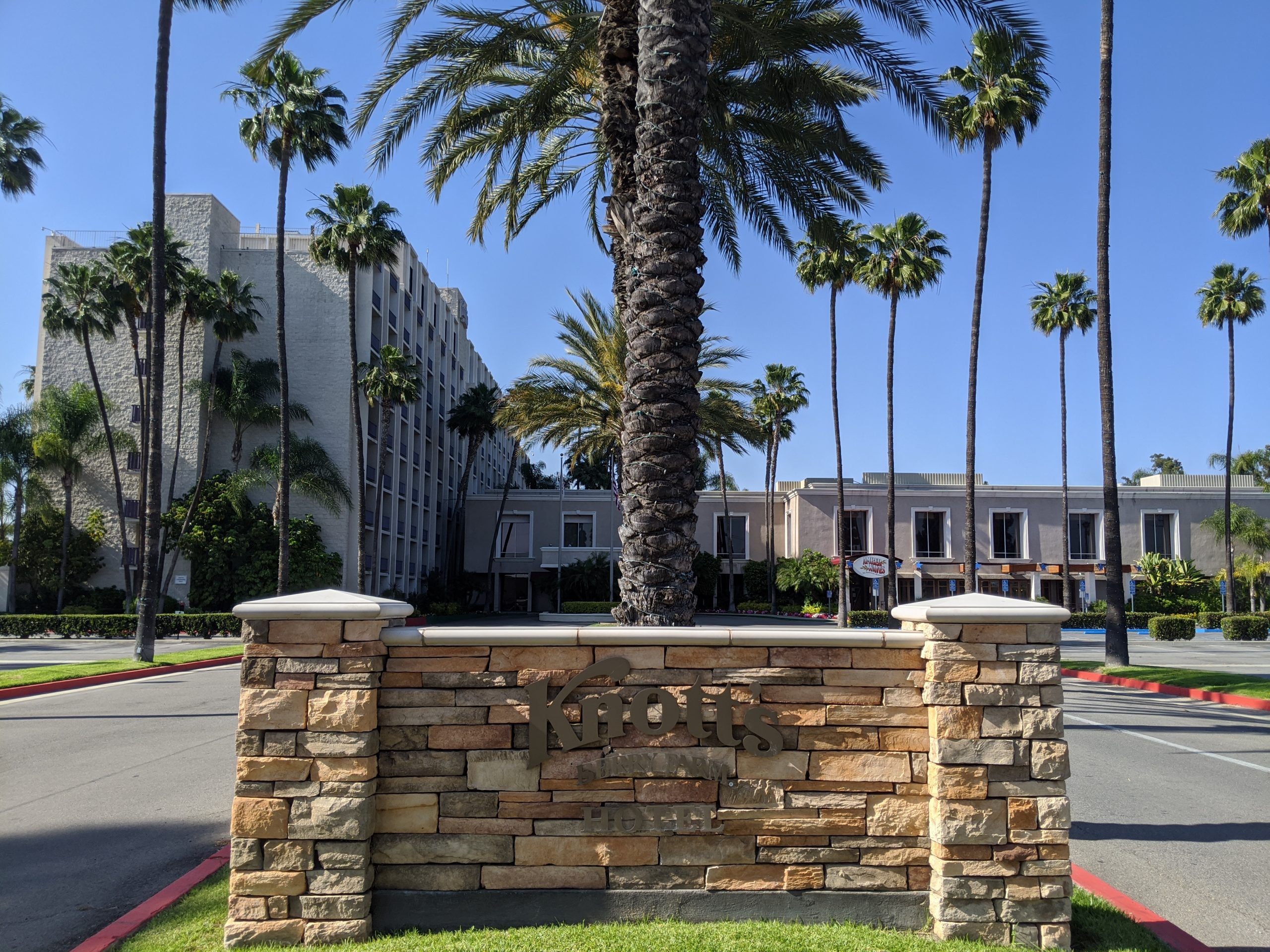 Knott’s phased re-opening began back in May, when Berry Market items and limited-edition collectibles were made available for curbside pickup. In the weeks to follow, the California Marketplace shops and restaurants, (including the famous Mrs. Knott’s Chicken Dinner Restaurant) opened for shopping, in-person dining and carryout. While Grand Avenue bustled, the poor hotel stood silent and lonely in the background. 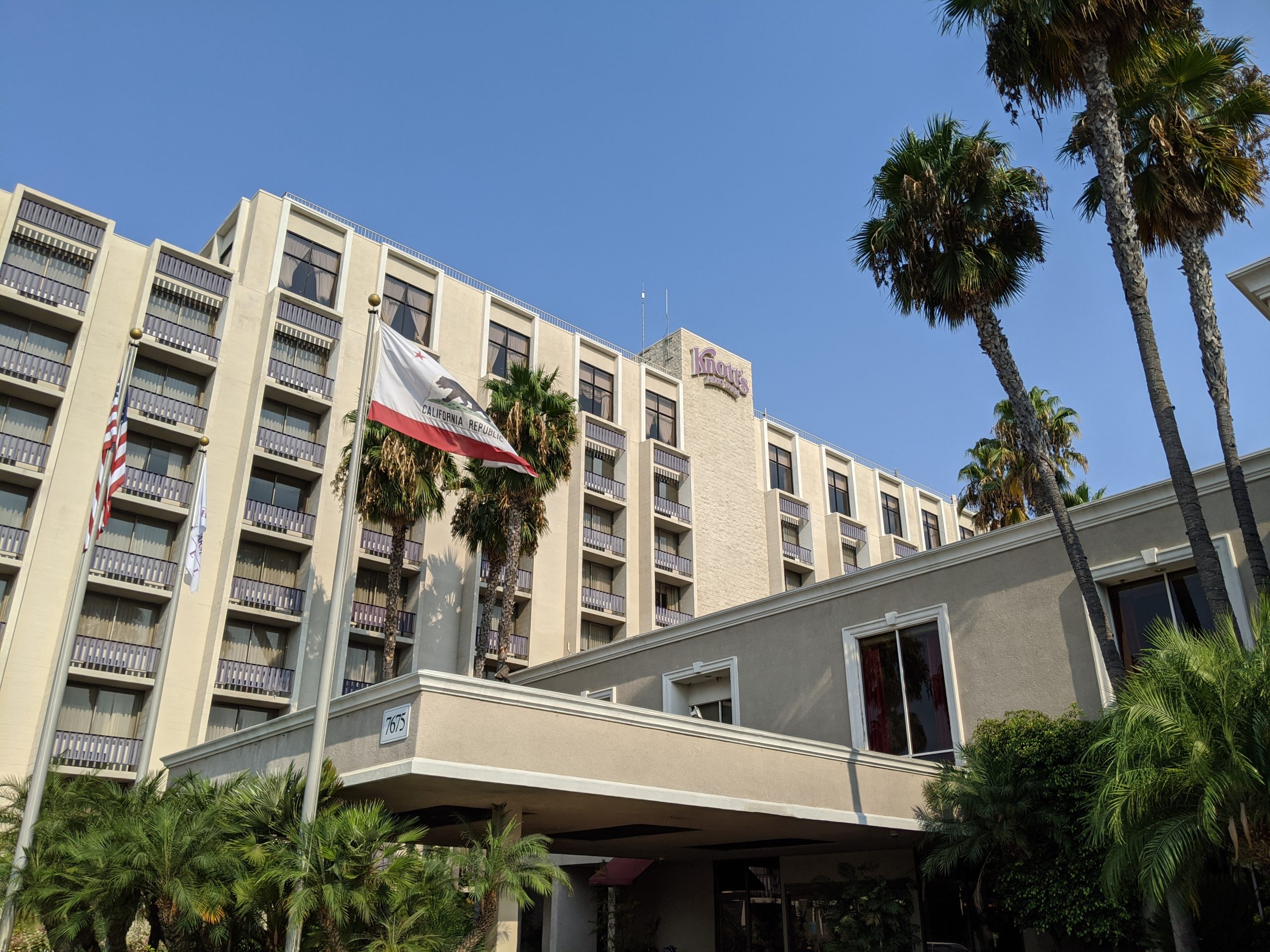 It was announced in the press release for the “Taste of Knotts” outdoor dining event that the hotel would begin accepting reservations for stays beginning Friday, August 21, the same day as the event kick-off. 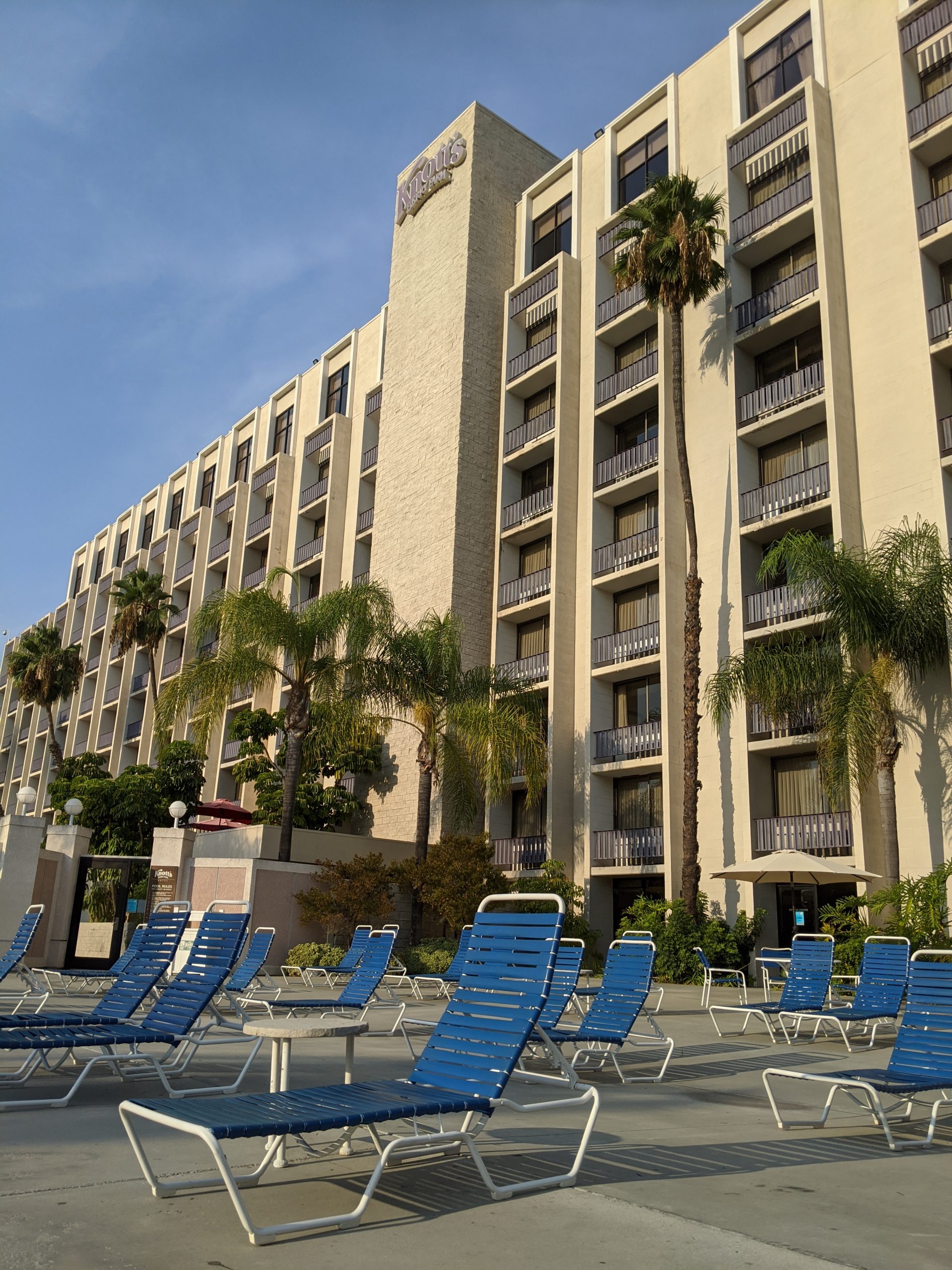 The inquisitive select few that kept investigating availability on the website booked rooms for 8/19 and 8/20 before the date was officially changed. Thankfully, those early reservations were honored. This made for a “test run” before the crowds returned for the tasting event. That handful of guests, including myself, pretty much had the hotel to the themselves on opening night. 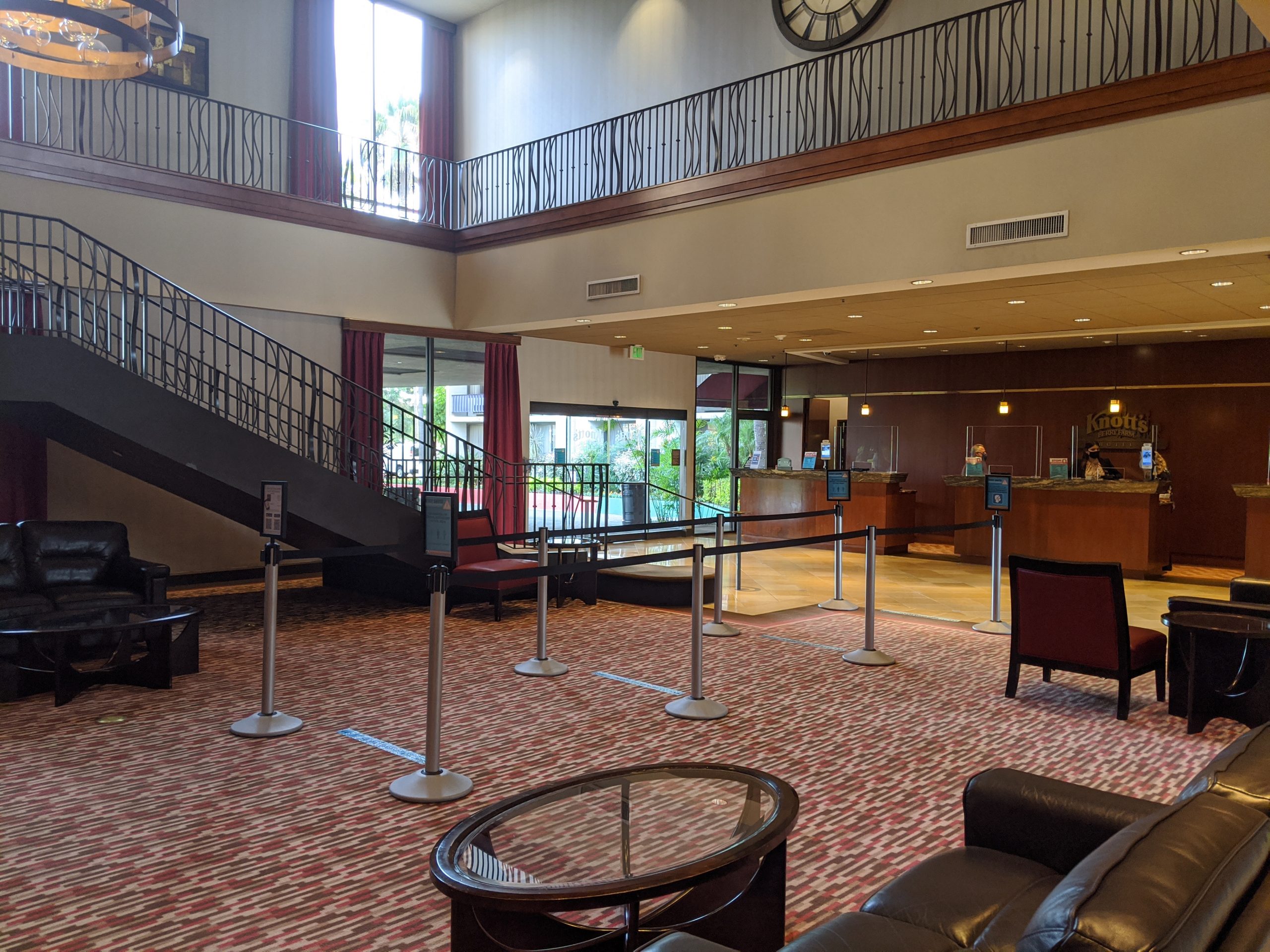 Those that have never stayed on property may be surprised to find that the amenities offered are plentiful. “Resort” was dropped from the hotel name several years ago, (presumably because the word itself may lend the expectation of a Ritz Carlton like atmosphere). But, in my opinion, the included offerings made it worthy of that title. 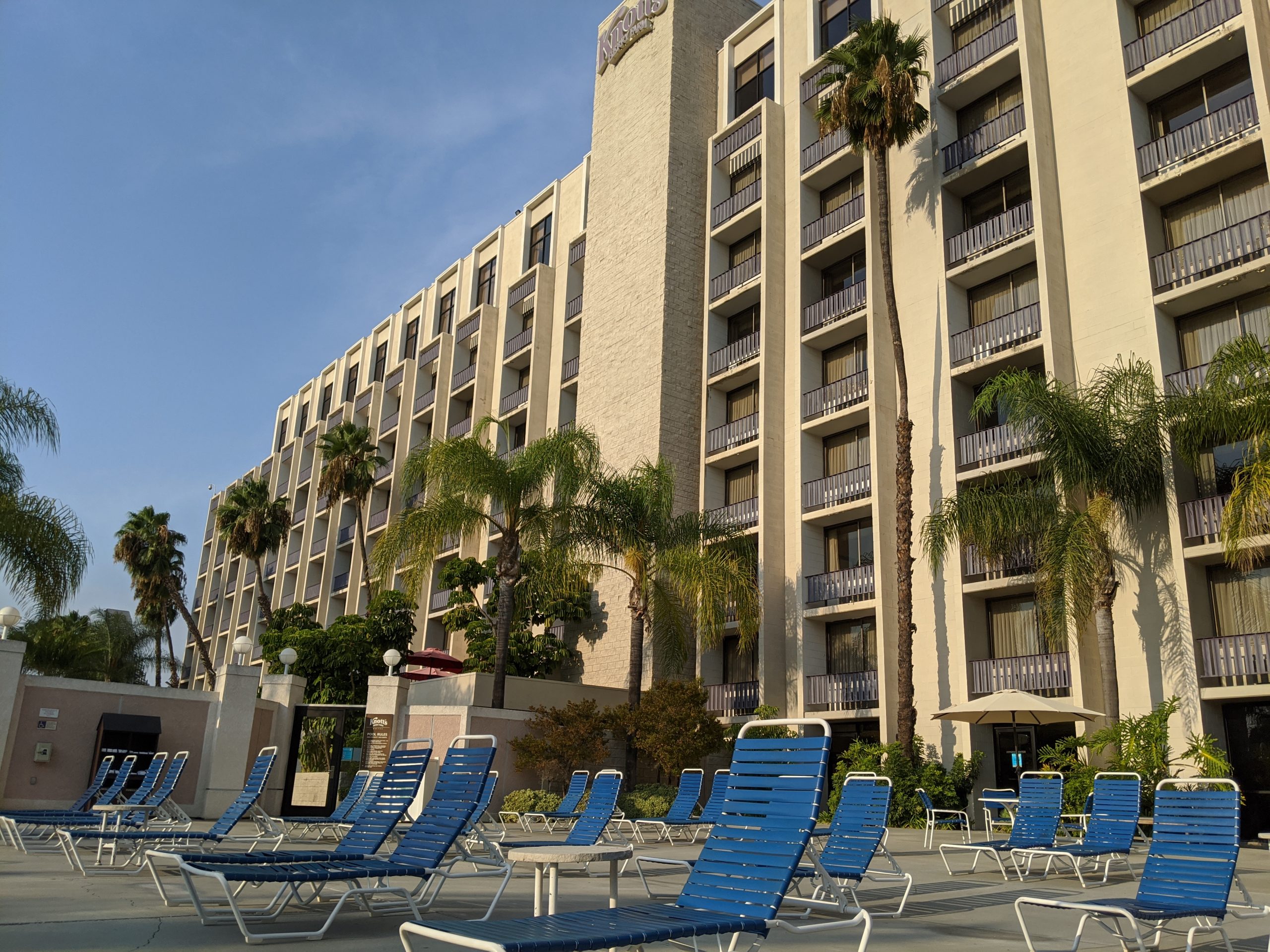 The hotel sits directly next to the theme park. While there is no direct access into the park, the main gate is less than a five-minute walk away. A walk that will take you past Mrs. Knott’s, Virginia’s Gift Shop, the Berry Market, TGI Fridays, and other venues. Inside the hotel, there is a full-service sit-down restaurant and bar (Amber Waves), a gift shop, concierge, gym with cardio and weight equipment, sauna, steam room, laundry facilities, a huge pool area with splash pad, sports courts, and Buena Park’s largest conference space. 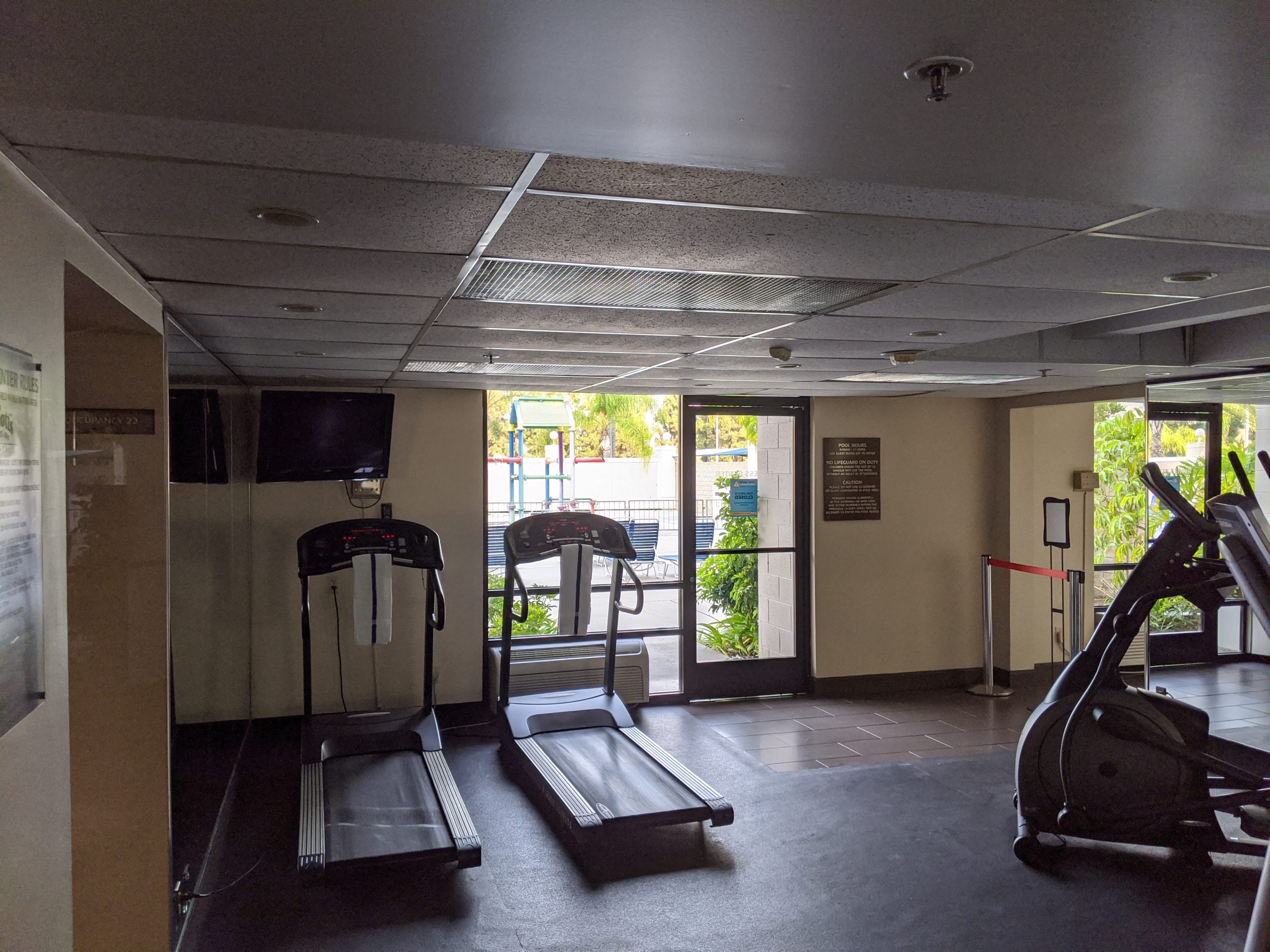 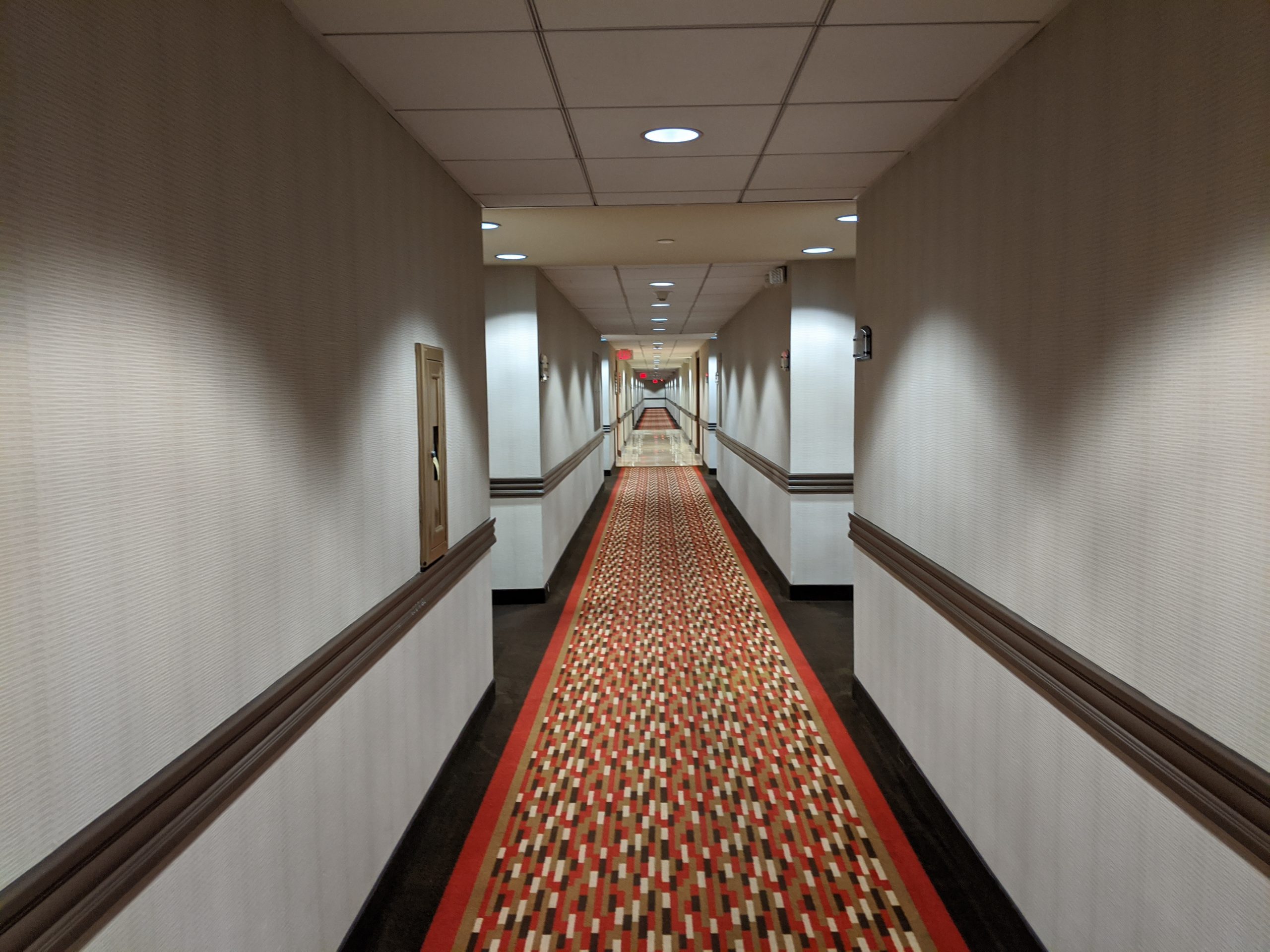 Inside the room, you will find the typical amenities, such as branded toiletry items, flat screen television, coffee maker, safe, etc. For some reason, I am drawn to the citrusy smell of the complimentary items found on the bathroom counter. When it was announced California is to eventually phase out single-use toiletry items in hotel rooms, I immediately thought of these… luckily, over the years (and too many stays to count), I have amassed a generous supply. 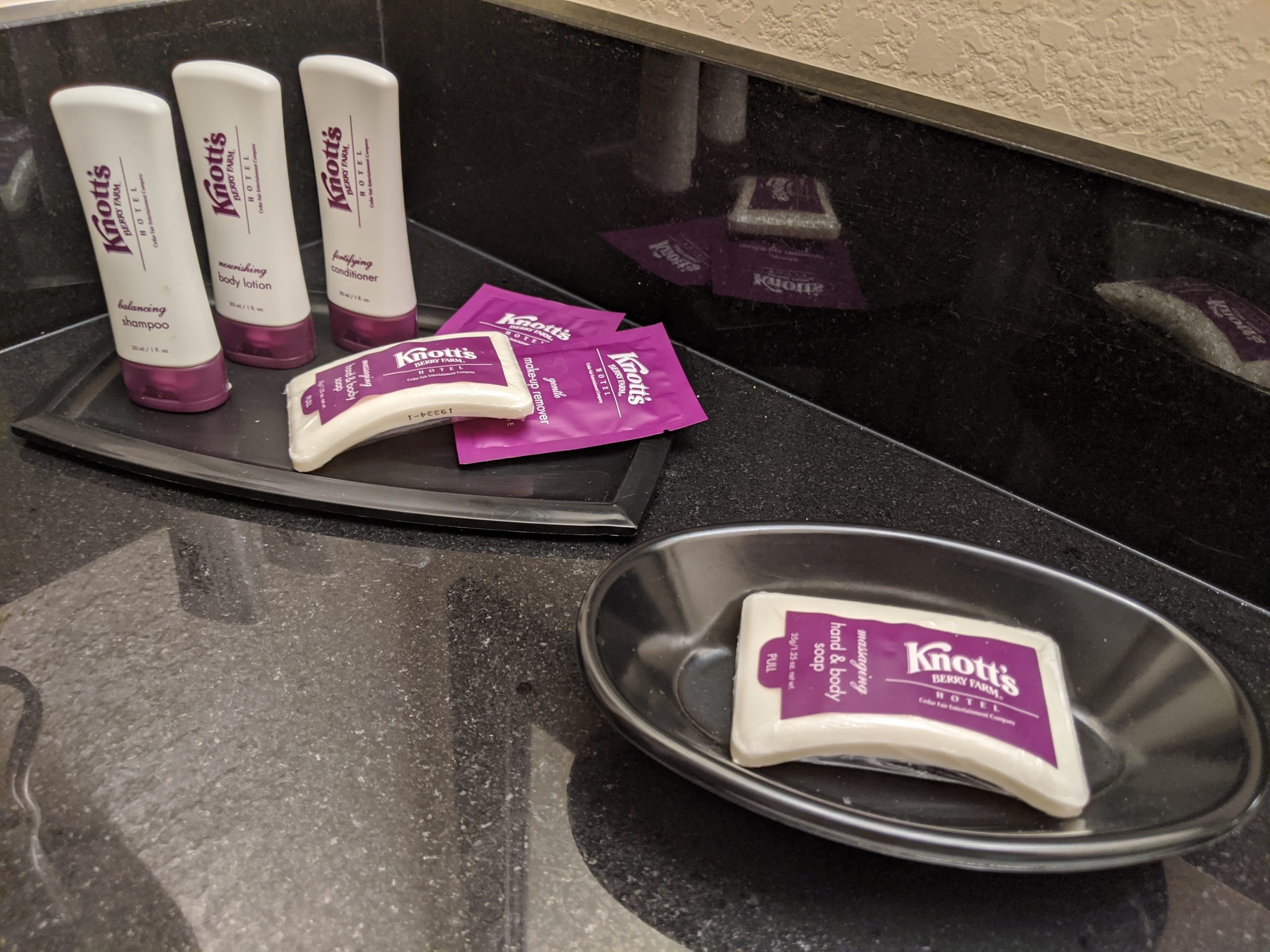 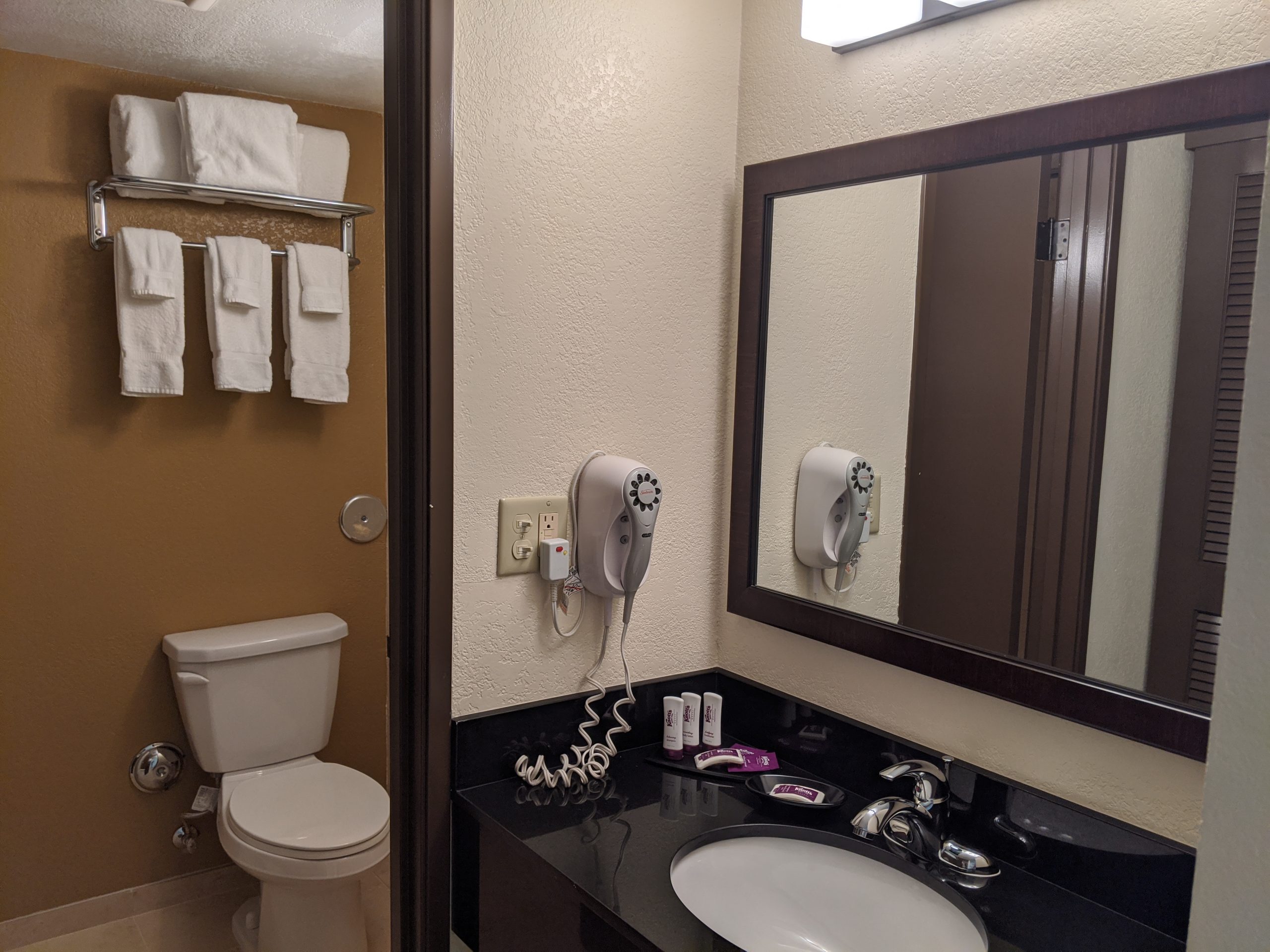 The decades-old hotel was at one time a Radisson property, hence the abundance of amenities. Cedar Fair has remodeled the rooms and spacious lobby several times. While the appointments are modern, the casual eye can tell the hotel is a bit dated, but not in a way that detracts from your stay. In fact, having stayed at the hotel dozens of times, I’ve never had an experience that required a trip to the front desk. A few scuffs on the walls, and a scratch on the furniture here and there is typical of any overnight accommodation. 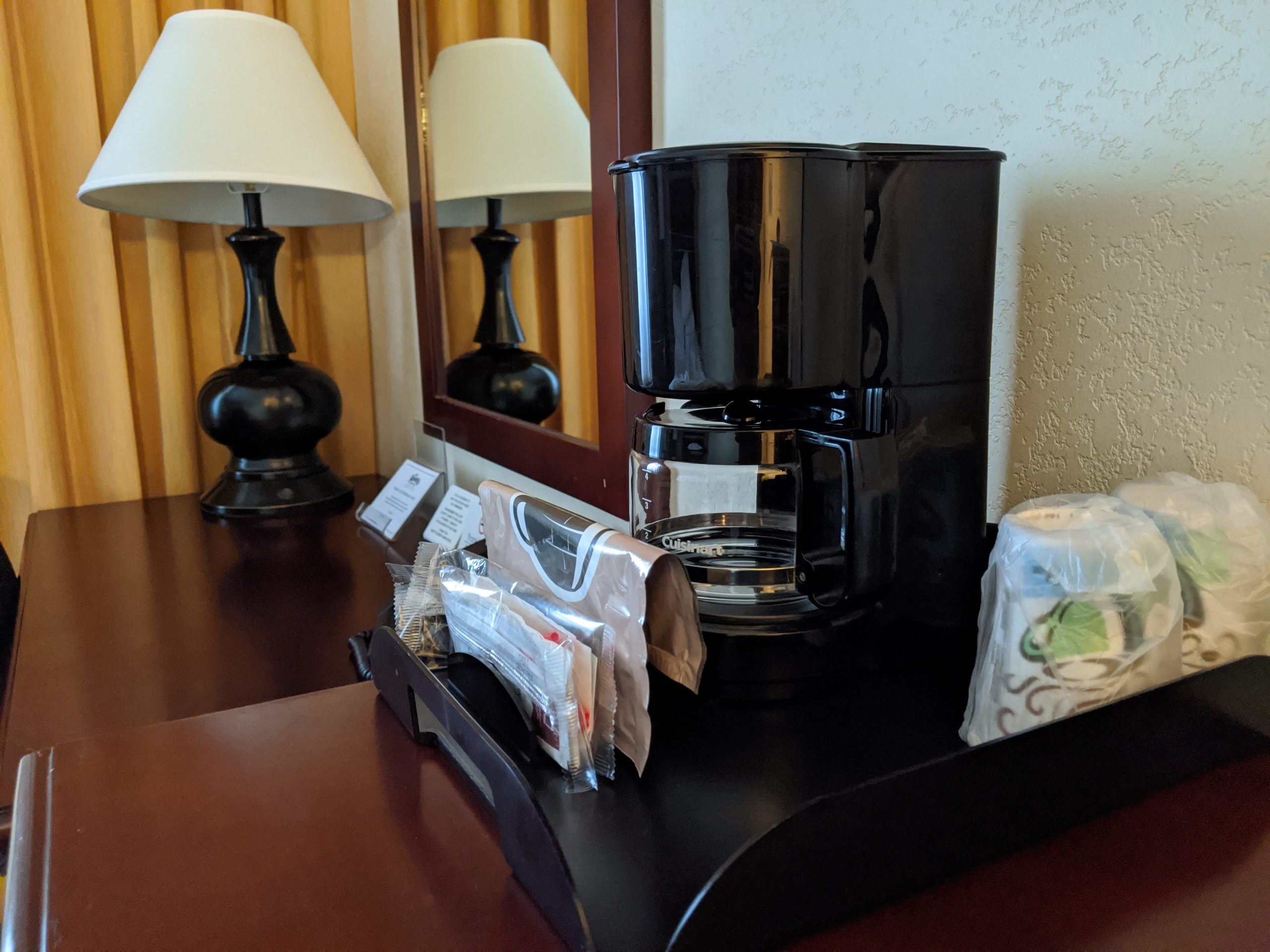 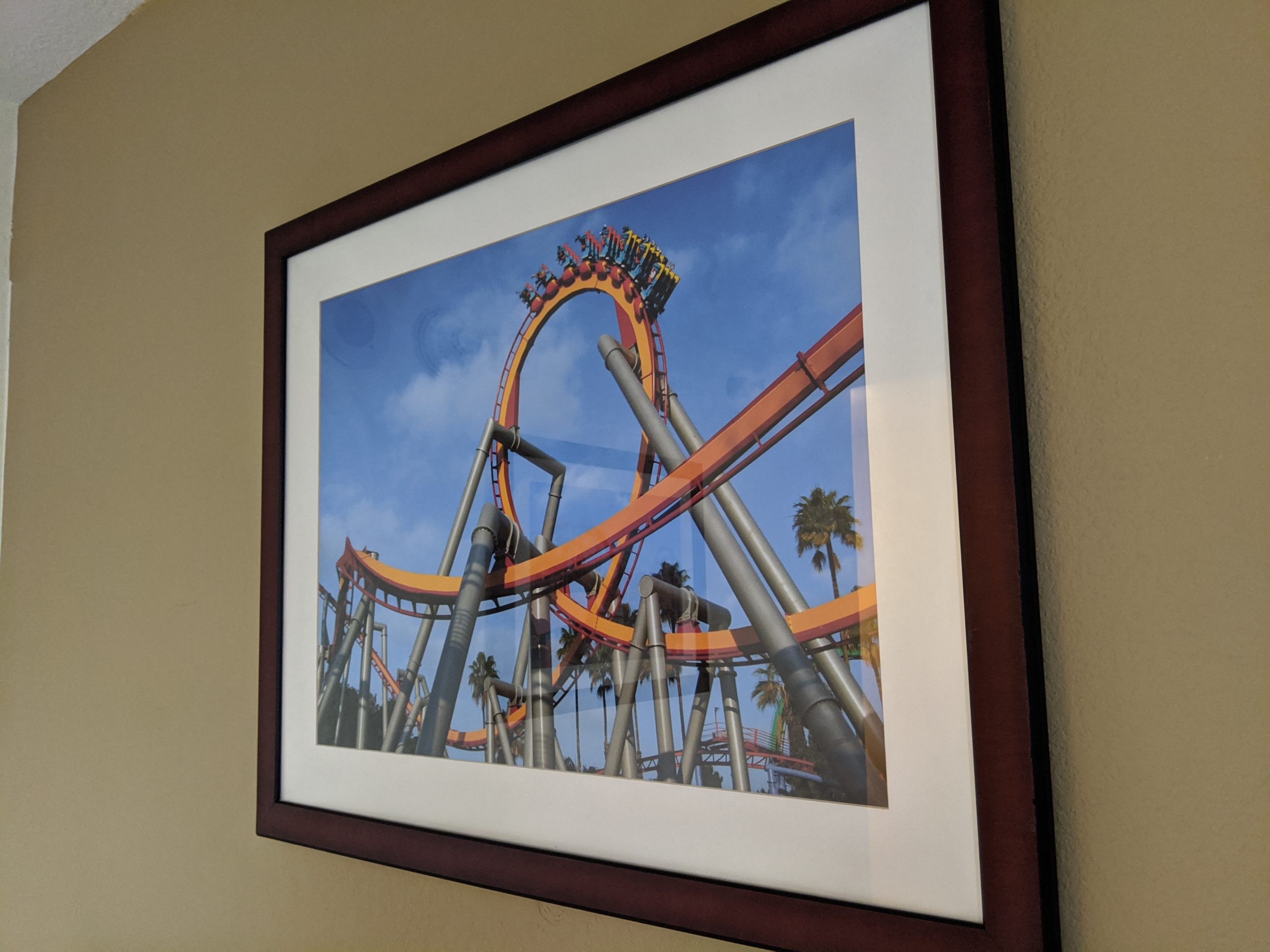 Several room types are available, from small (cozy) single queen bed rooms, to oversized rooms with a mini kitchen.  Pictures on the wall feature artistic shots of the parks most popular coasters. A Snoopy themed wing features rooms that once (and hopefully again soon) included a nightly tuck in from the famous beagle. 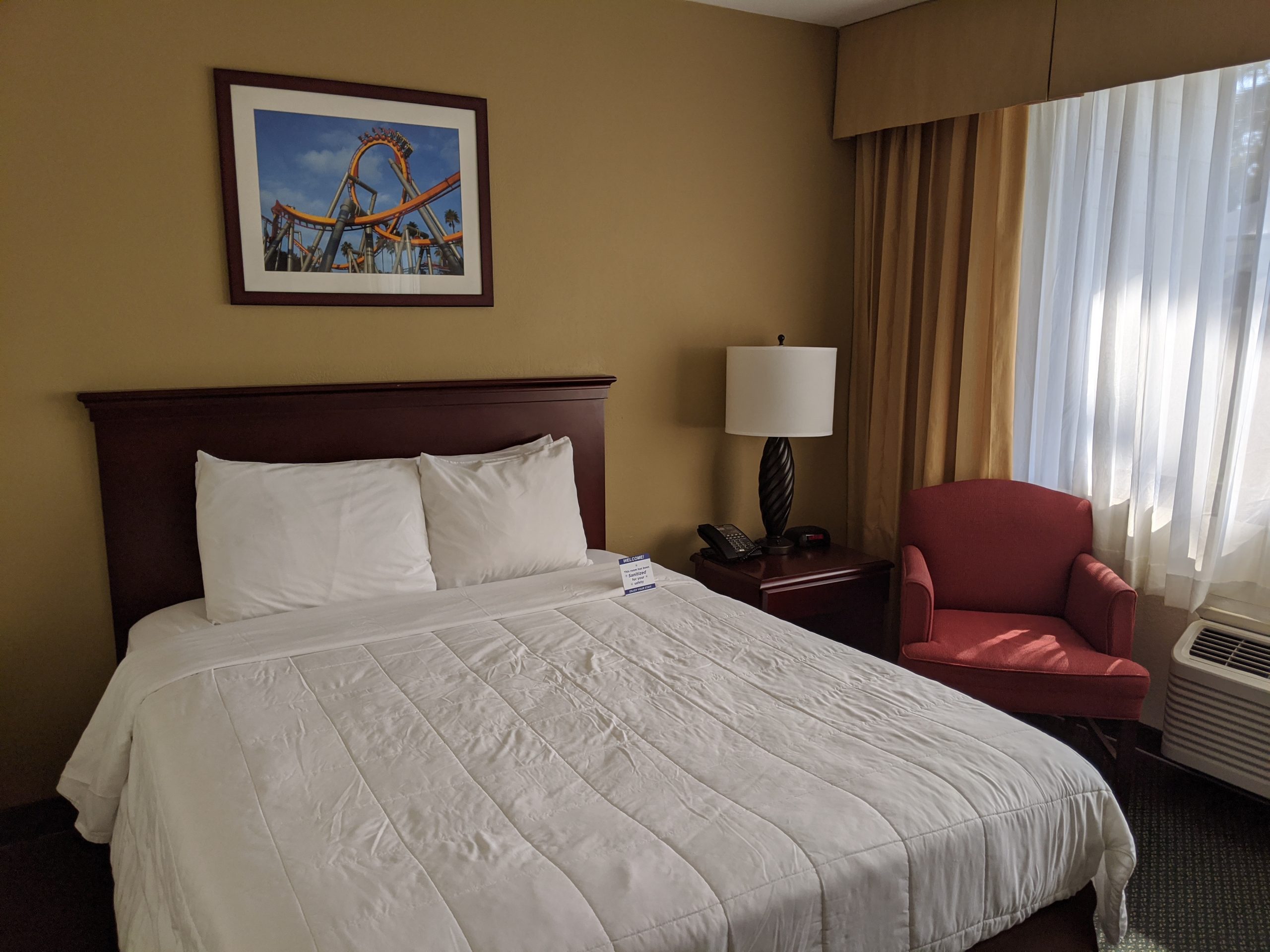 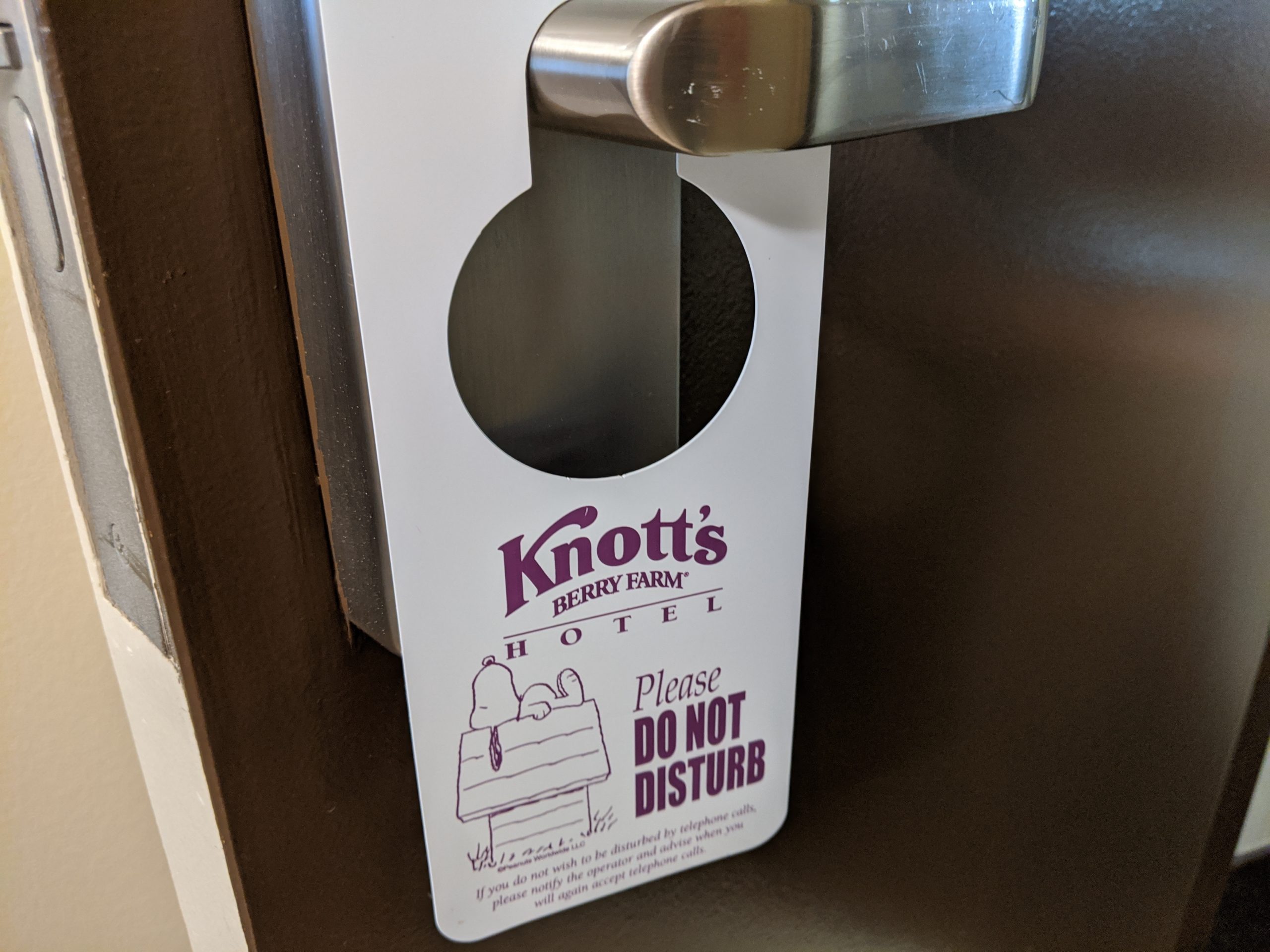 The rooms are solid three-star status, but the service and amenities (in my opinion) push that up to four stars. You can find Snoopy in the lobby and restaurant at various times throughout the day. A shuttle will take you directly to the Disneyland front gate at no charge with room reservation. 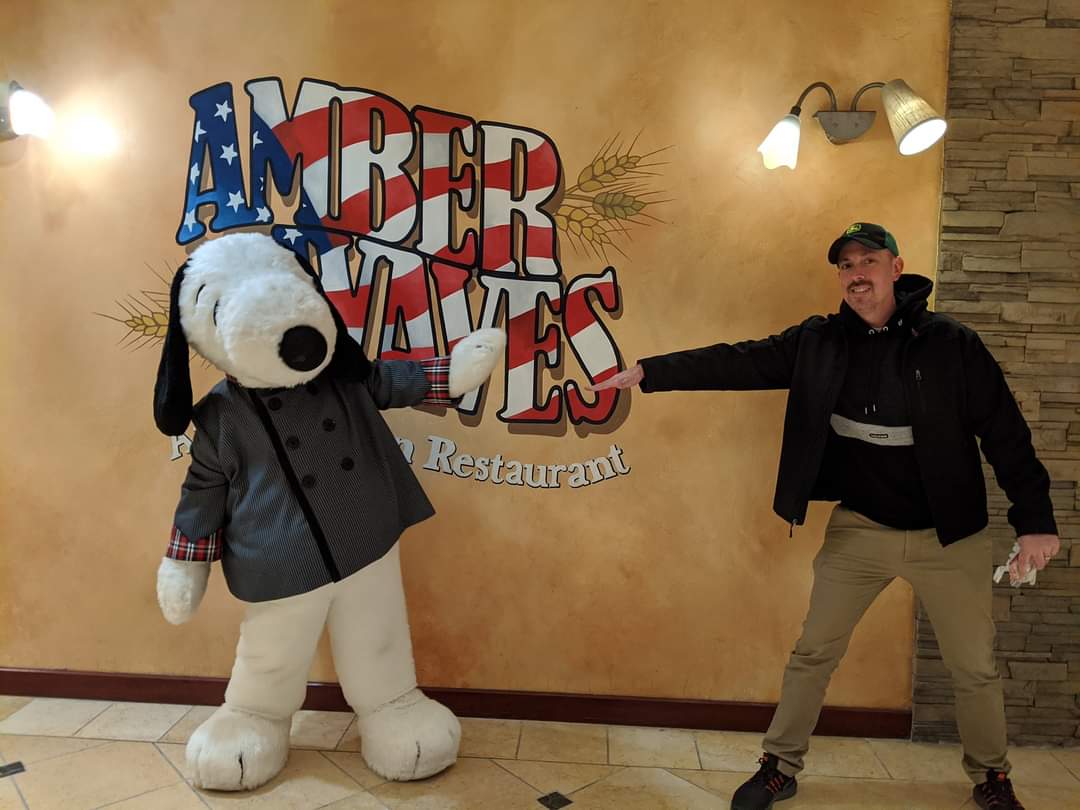 Amber Waves offers some of the best food at any theme park in So Cal. The homey Americana menu doesn’t push any creative boundaries, but it is always delicious. I literally crave their Cajun Salmon with Shrimp and Creole Mustard Sauce. The “One Nation Nachos” are a must-try, as is the Tortilla Soup. During Knott’s Scary Farm, the bar transforms into the “Haunted Lounge” with sinister sounding drinks and spooky décor. 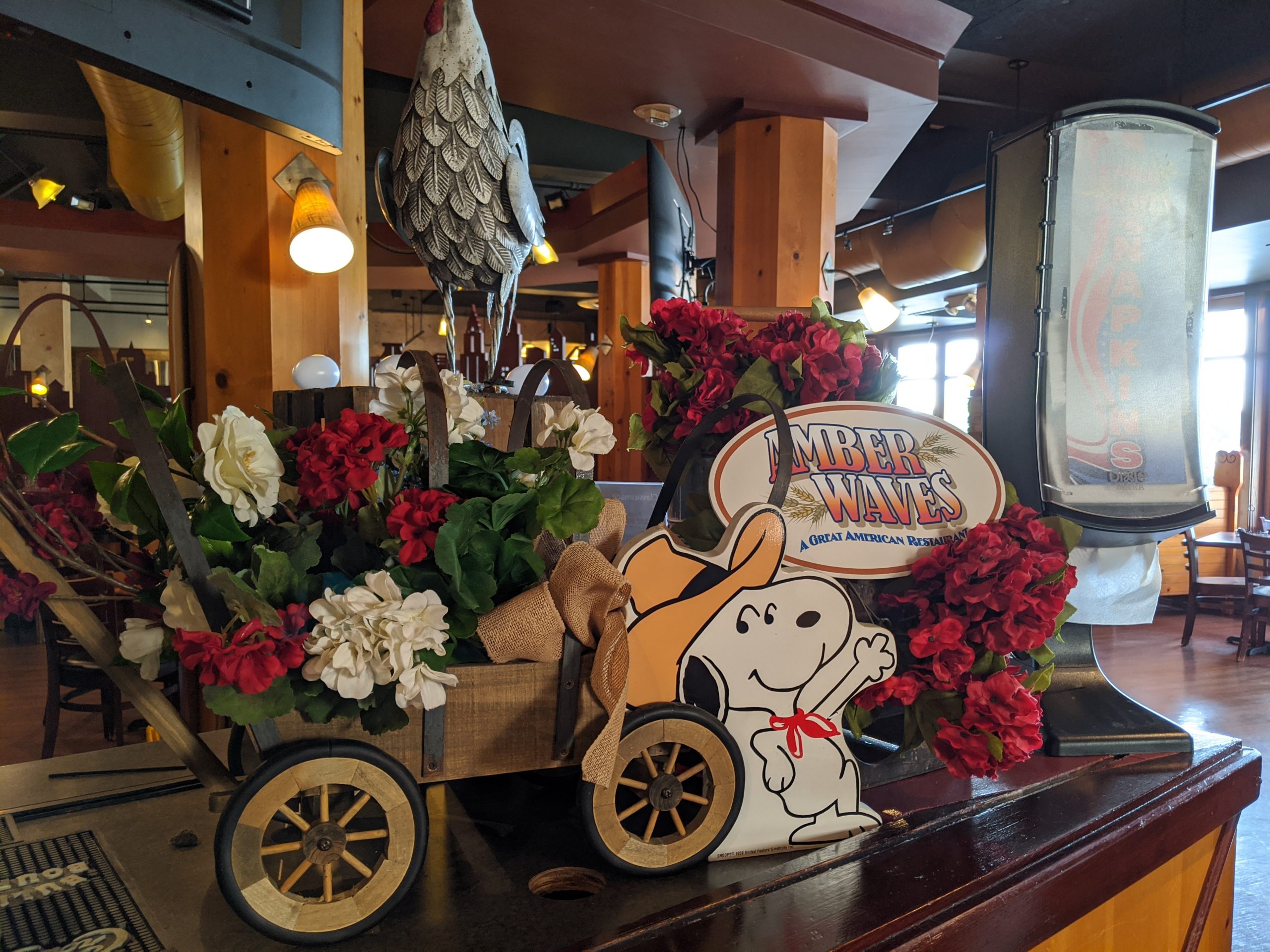 Unfortunately, what I just mentioned can be experienced on a “normal” visit, but as we all know, things are not normal right now.

Since reopening the marketplace and the park for “Taste of Calico,” Knott’s has taken the lead in terms of safety, cleanliness and instituting social distancing. Their current policies and cleanliness rival a typical day at Disney or Universal. Not only have they found creative ways to be open, but do so in a manner that makes visitors feel safe.  The park has been beyond clean (almost to the point of neurotic), but that’s a good thing. 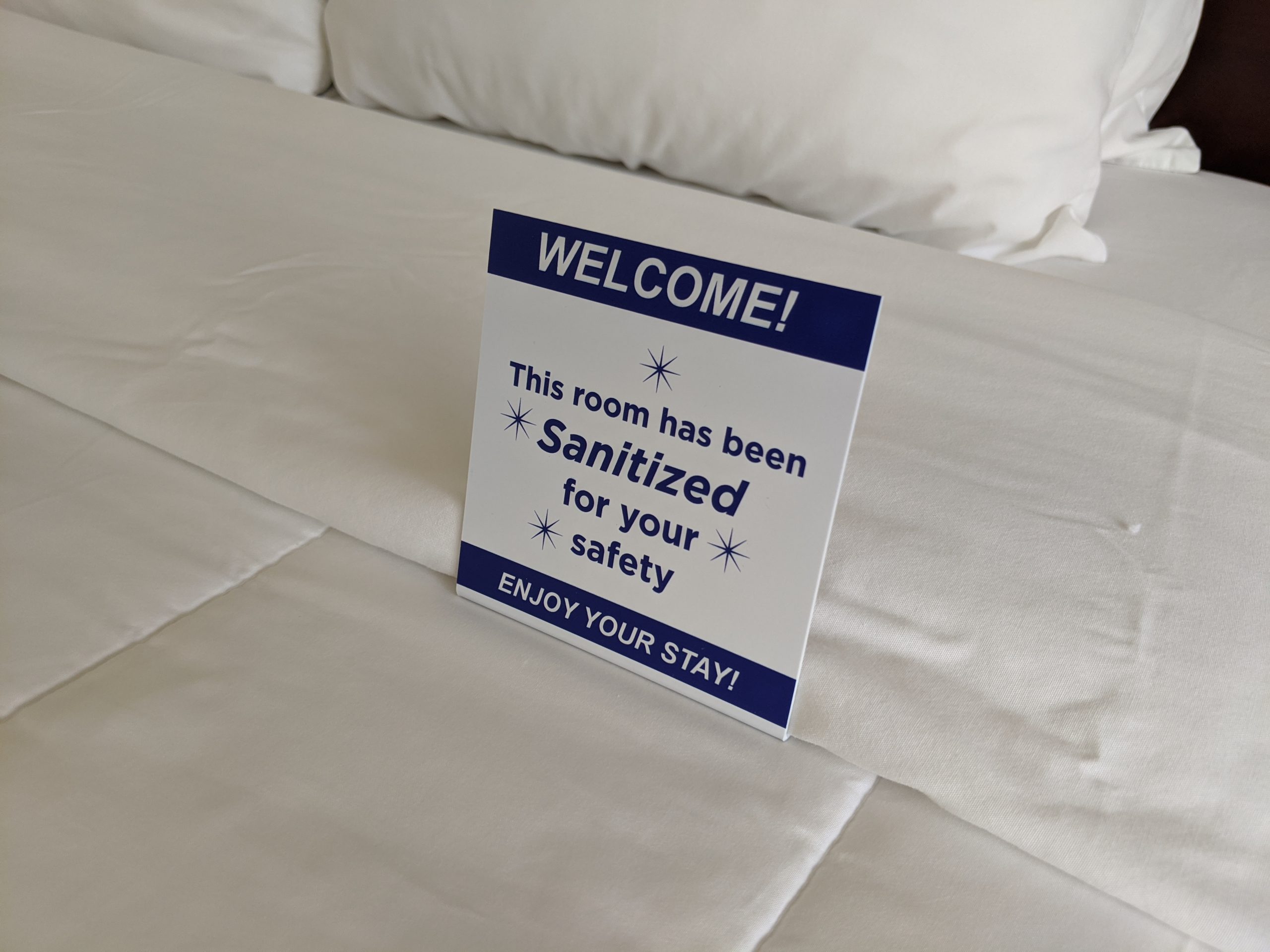 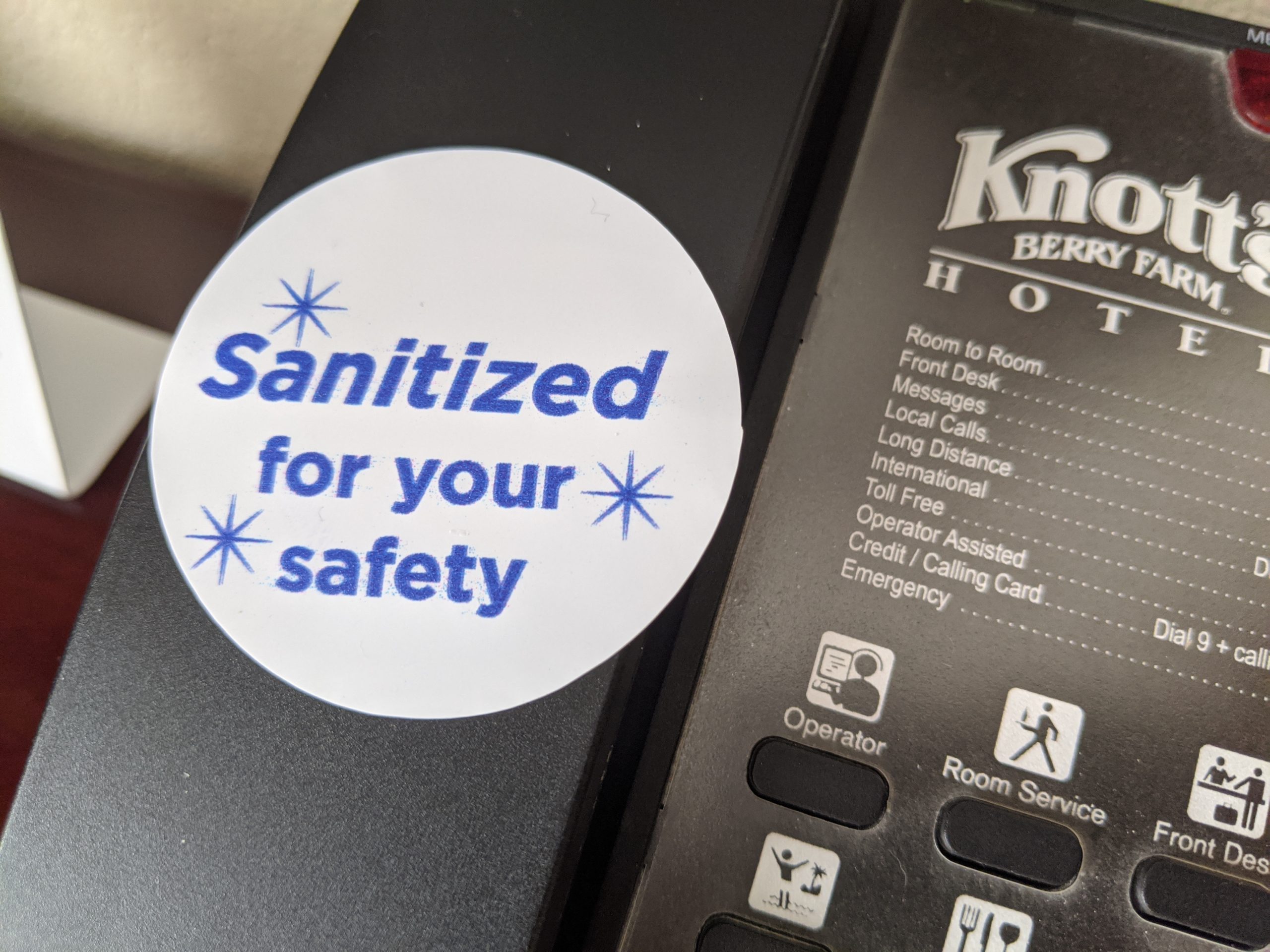 This new standard continued during my recent stay. Prior to checking in on Thursday, I was called and reminded of the new policies, including mandatory mask wearing, temperature checks, and other protocols. 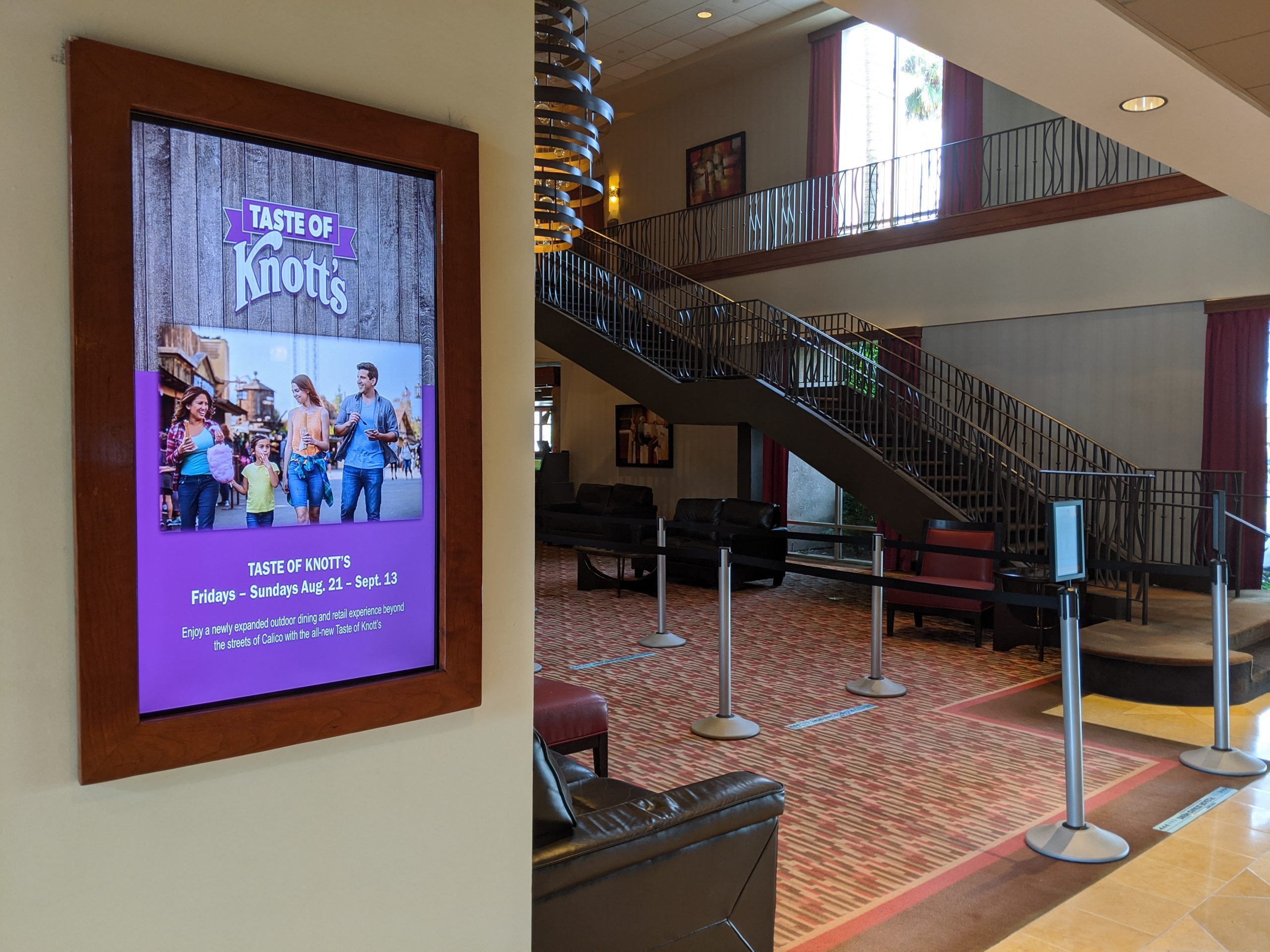 When arriving, I was cheerfully greeted by a half dozen staff members and security that genuinely looked happy to be back at work and welcoming guests. 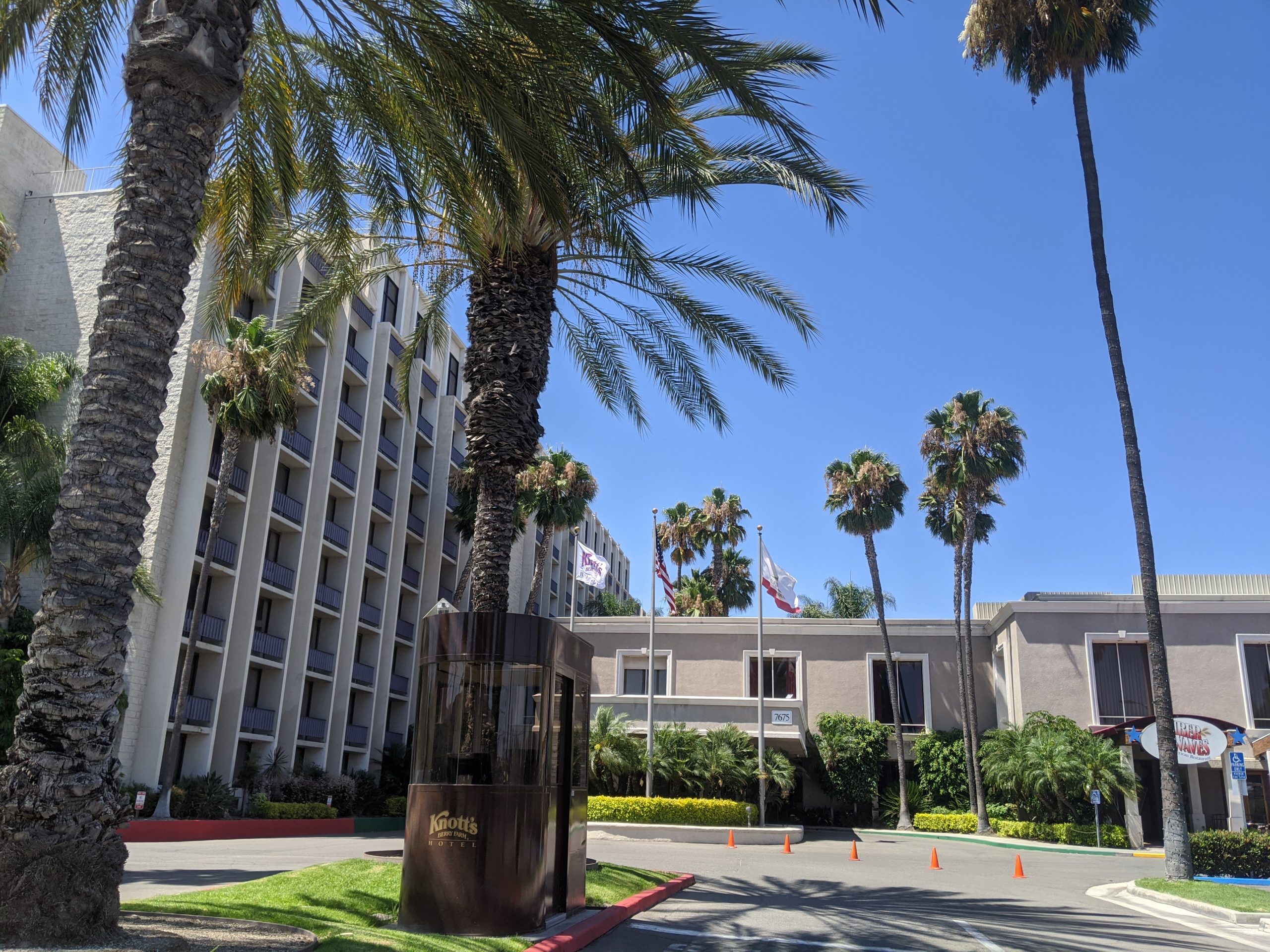 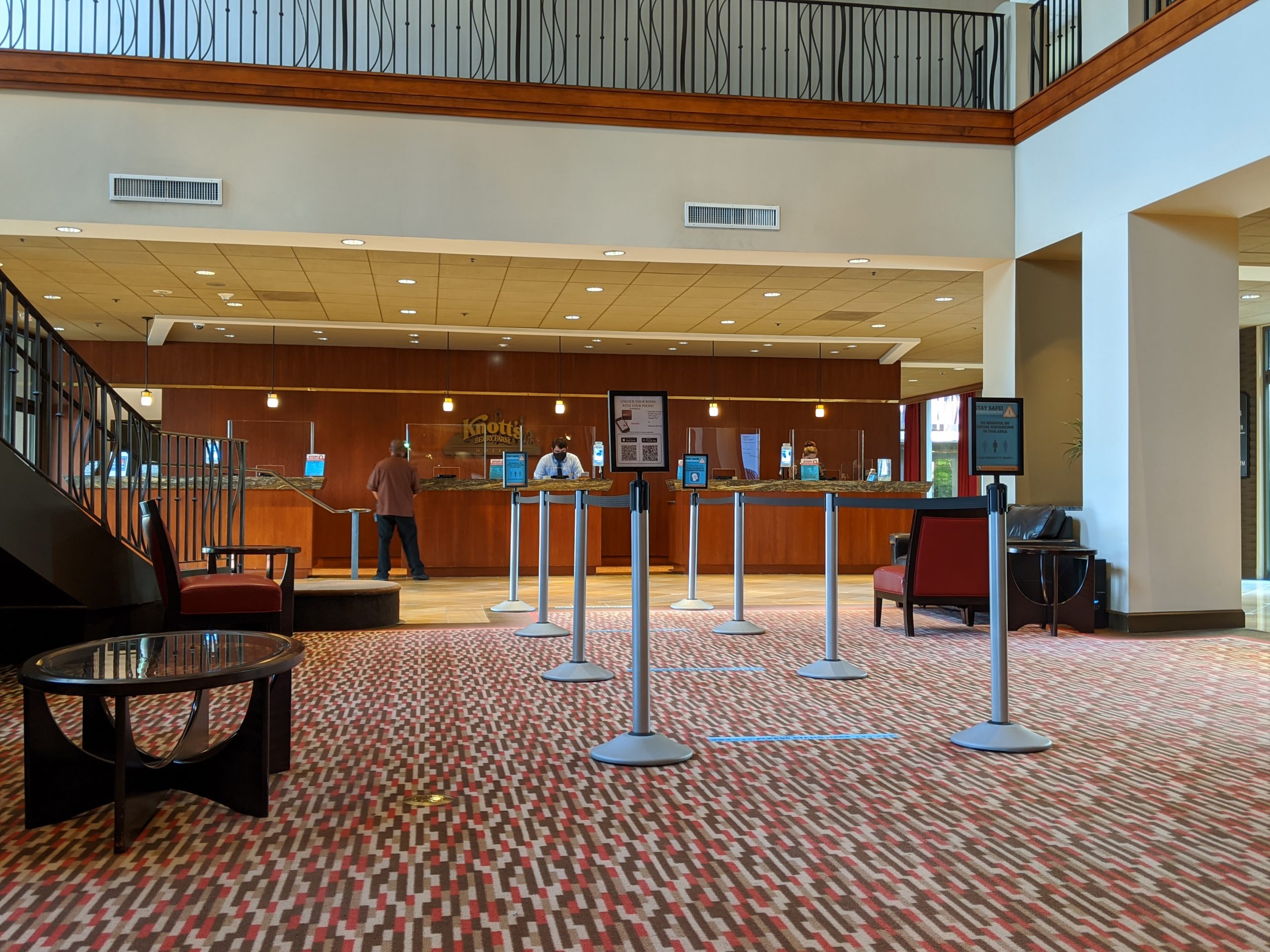 A table top iPad type device was placed at each check-in station in front of the plexiglass. Guests simply line up their forehead and the monitor takes your temperature. This was a pretty cool technology that I had never seen before. It felt more trustworthy than those hand-held devices being used to scan guests at Downtown Disney and CityWalk. It should be noted that upon entering Knott’s itself, security is using a high-tech thermal scanning device to take your temperature. It is quick and requires no close contact. 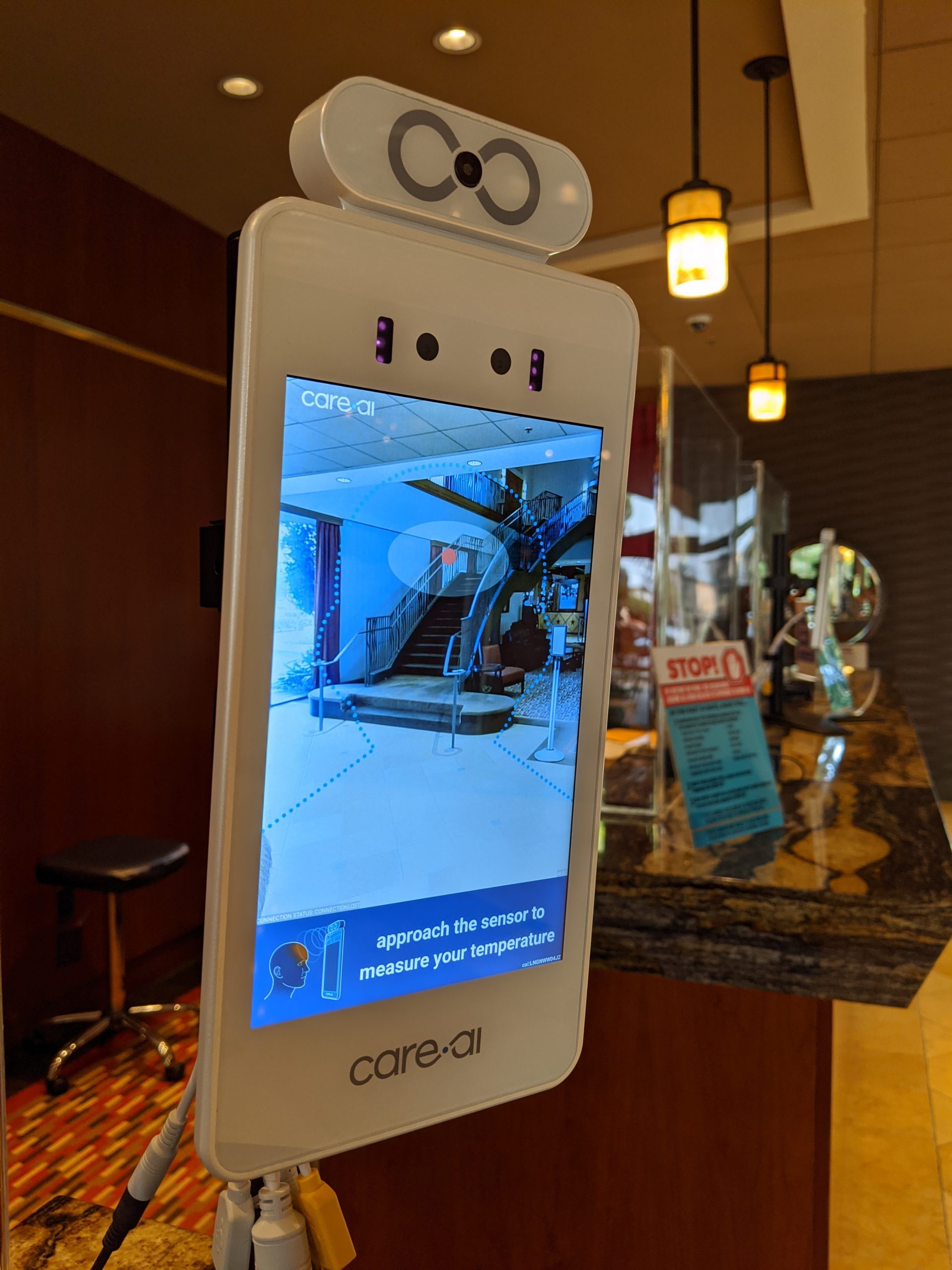 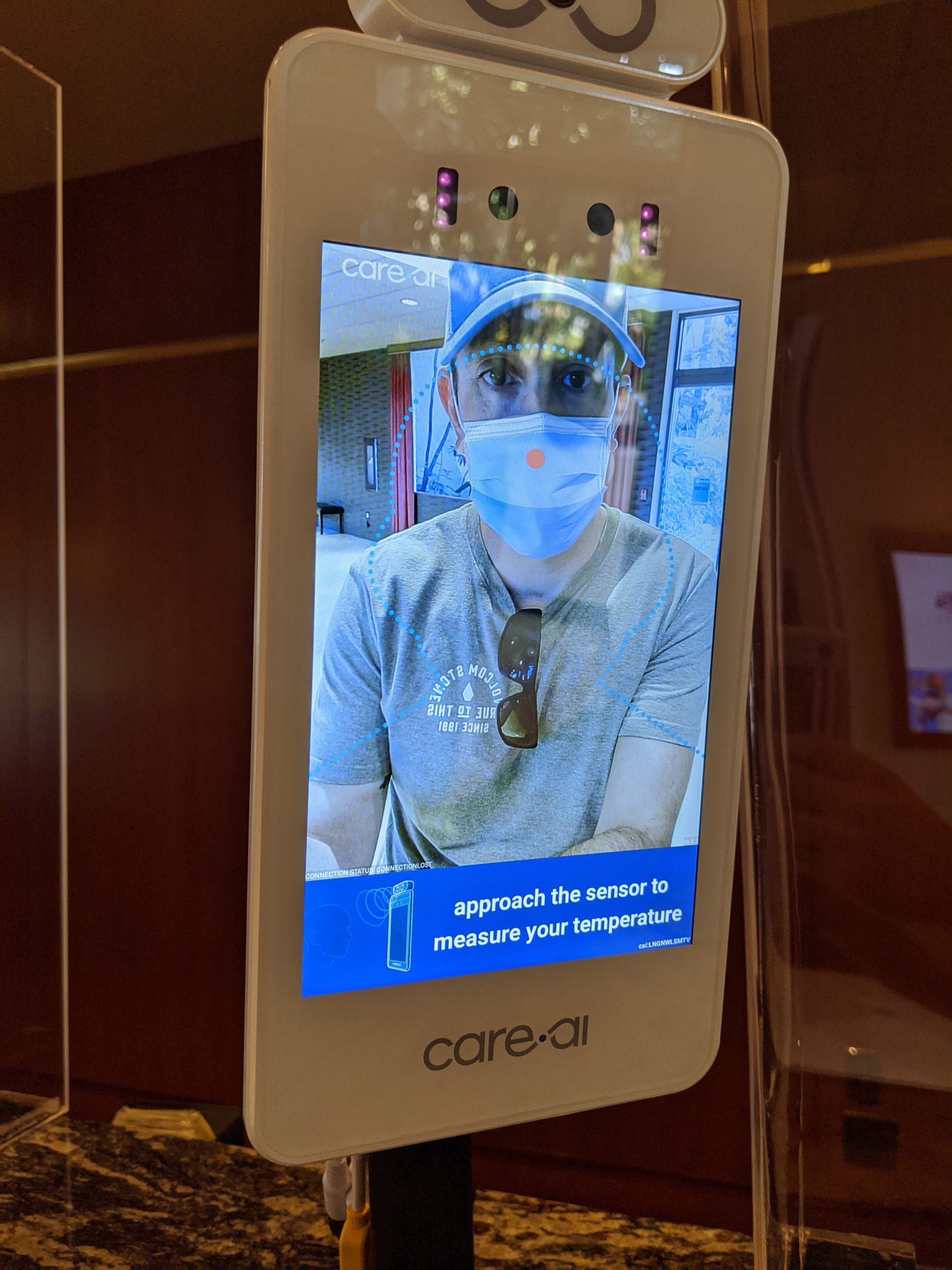 Upon successful temperature check, I was given a wristband with date and time. This band tells other staff members and guests that I had been checked and was free to roam the grounds. If you plan on staying more than one night, it is required that every member of your party be rechecked at the front desk every day. I was later told, once the park opens for special events, you can bypass the additional park check by flashing the wristband. 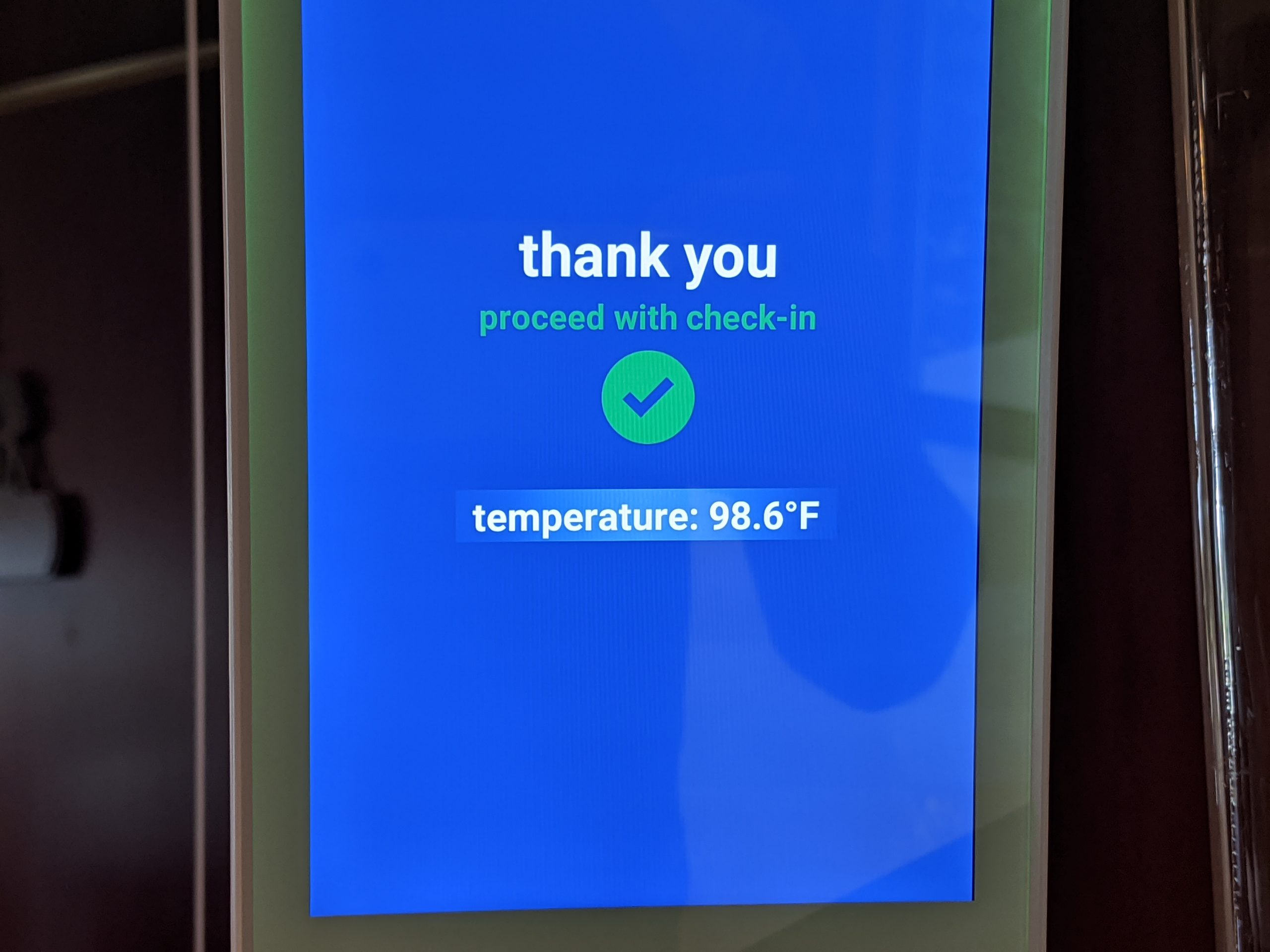 Capacity in the pool area has been reduced and chairs have been spread apart to ensure social distancing.  In order to do this, a reservation must be made. Guests are offered two-hour blocks of time. After each two-hour block, the pool area is closed, cleaned and reopened 30 minutes later. My room faced the pool. I saw them do this four times… almost to the point of being excessive. But hey, it’s appreciated. 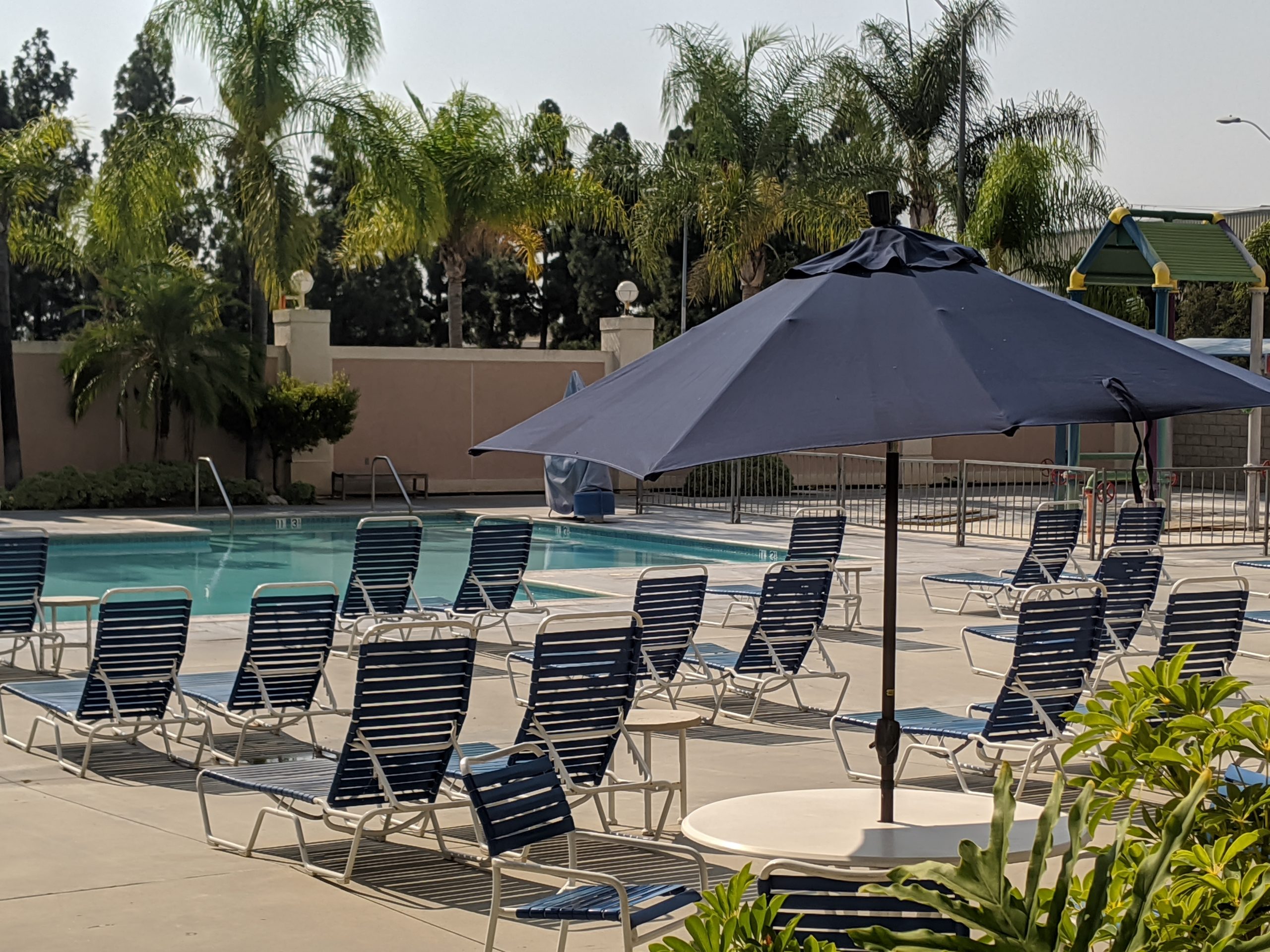 Unfortunately, with social distancing policies in place, the splash pad, gym area, sports courts, gift shop, and laundry facilities are temporarily closed. Amber Waves is currently scheduled to be open from 7-10 am each morning with a limited to-go menu only. Snoopy is currently on “vacation” and will return when it is safe for him to do so. The room has many areas inside that had been noted as “sanitized.” To avoid entering your room, housekeeping will only come after five nights of stay. 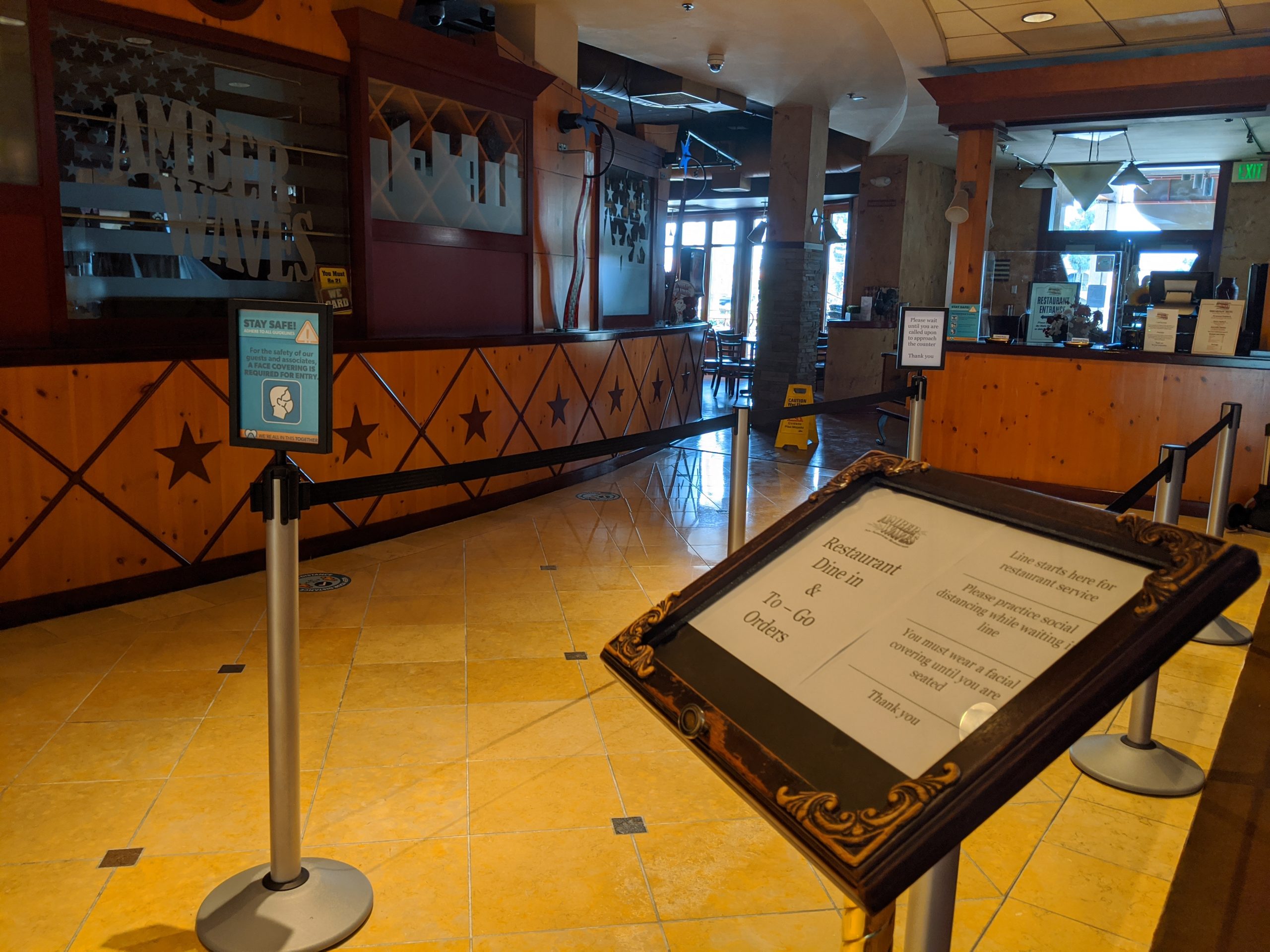 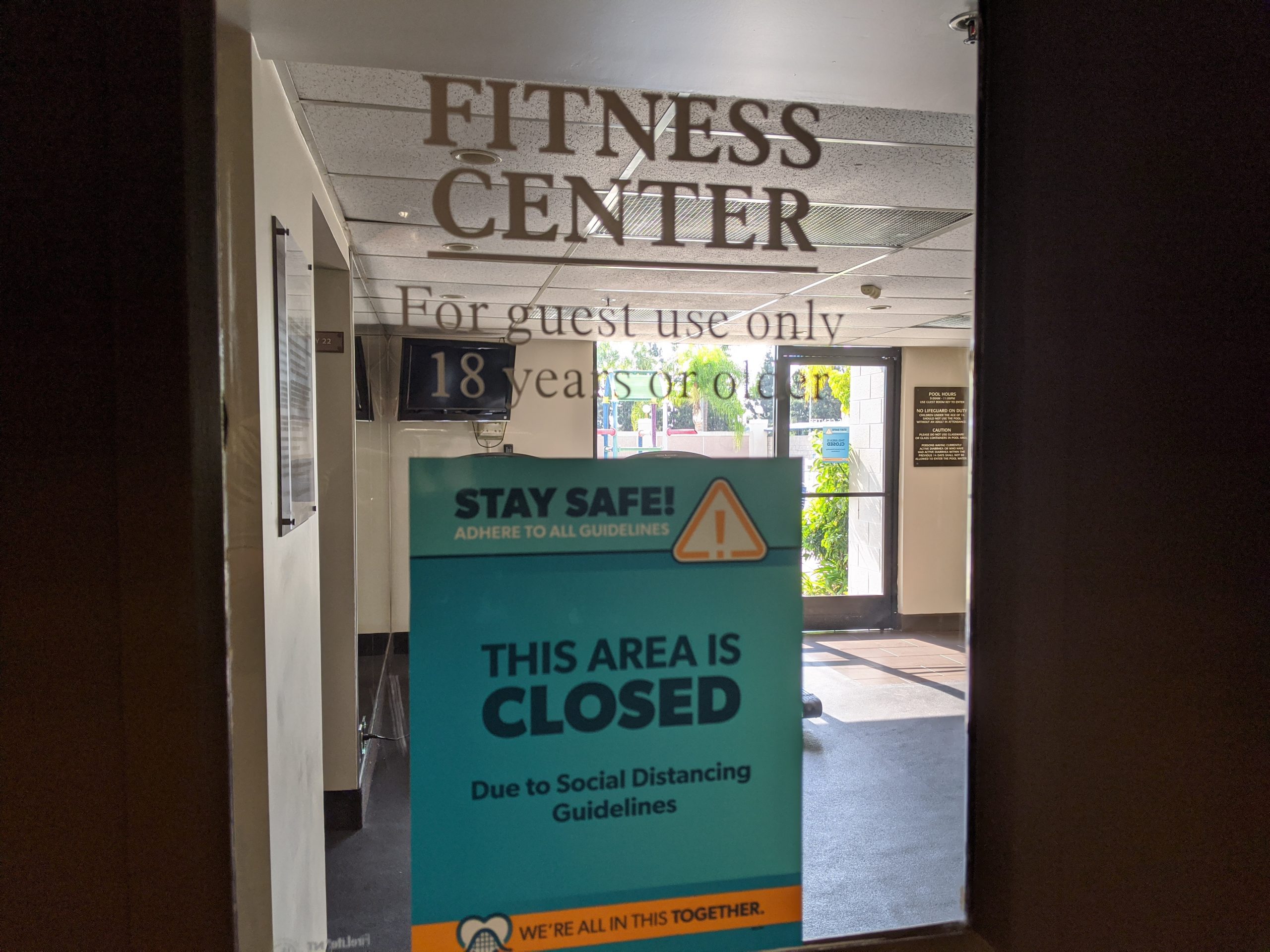 Albeit a bit different, it was so nice to be back at the Knott’s Hotel, which I consider my “home away from home.” The new protocols made me feel safe and comfortable. While, I would have liked to have seen a reservation system for the gym, and socially distant photo ops with Snoopy, I couldn’t have asked for a better one-night stay.

If you are traveling to Southern California, the Knott’s Berry Farm Hotel is a great place to call base camp. Buena Park is the “Center of the Southland.” Besides being 10 minutes from Disneyland, the hotel is a convenient drive to the Orange County beaches and points north in Los Angeles. The hotel is also a great getaway for a local staycation, whether the park is open or not.

With the situation changing every day, a call to the front desk would be advised to check on current policies and offerings.

Thank you Randy for creating this article! Find Randy’s work on https://www.thefunnelcakeblog.net/ and check out his Facebook and Instagram pages! For a video of the experience, you can check that out below: