Alex: Halloween is an exciting time for theme parks and guests alike. This American tradition is already spreading out at every corner of the world, and Spain is getting their first scream park this year. Horrorland opened its doors this week and we were invited to their pre-opening event!

As we were waiting for the opening show, we were delighted with Desperados Sangre, an appropriate beverage for this season. 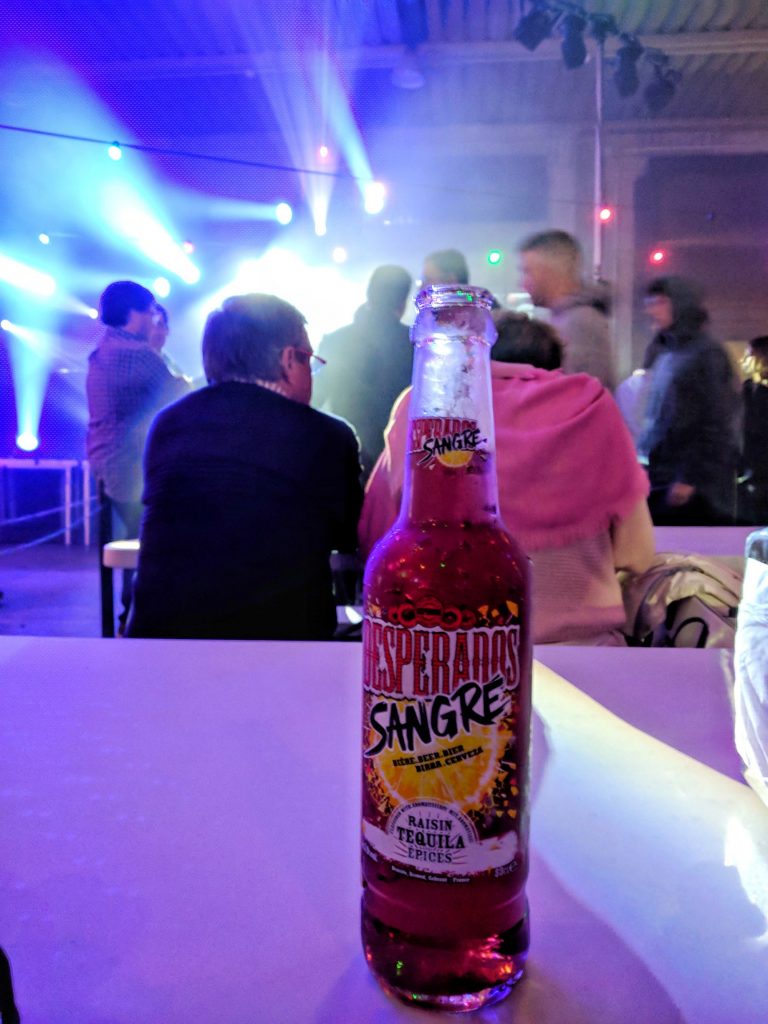 We also had a chance to check out the map of the park for the first time. 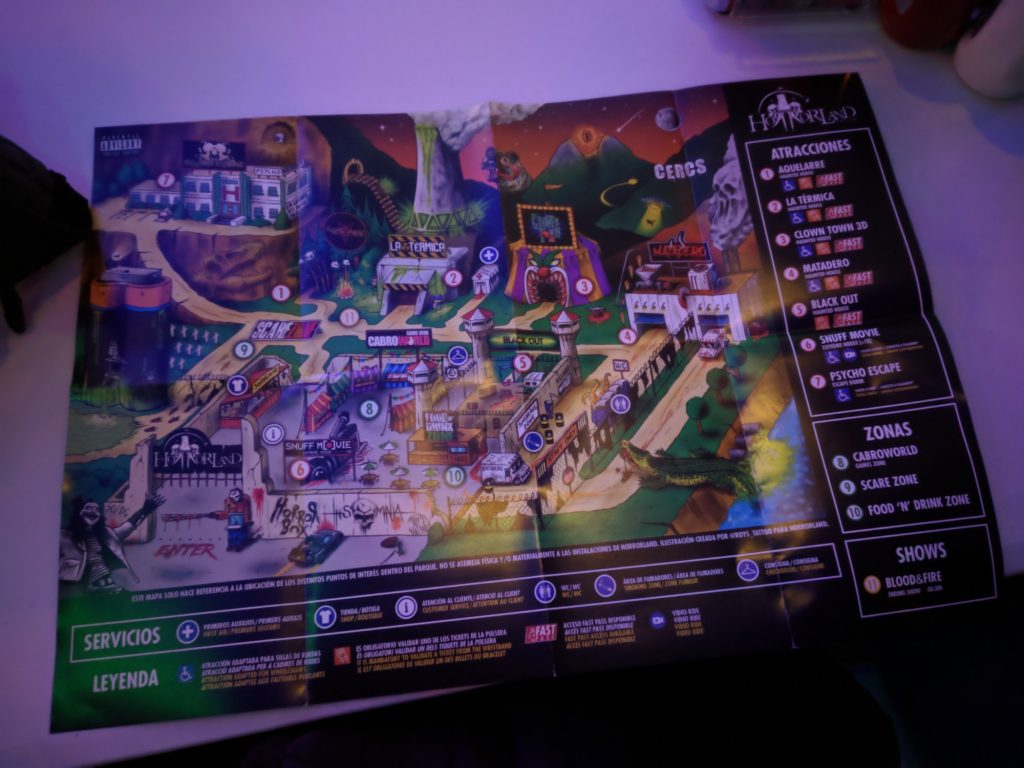 And it was revealed that a Christmas edition is on its way! 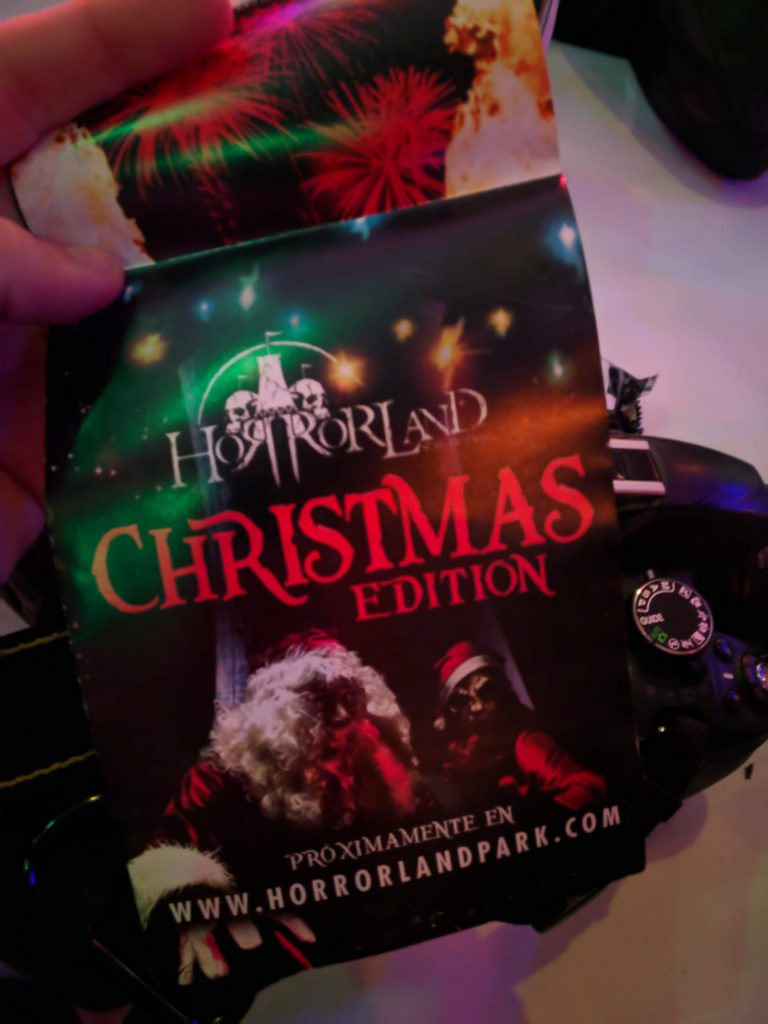 Monsters were roaming too, giving chills to press, authorities and guests alike. Today the park is a little more of half of its capacity. 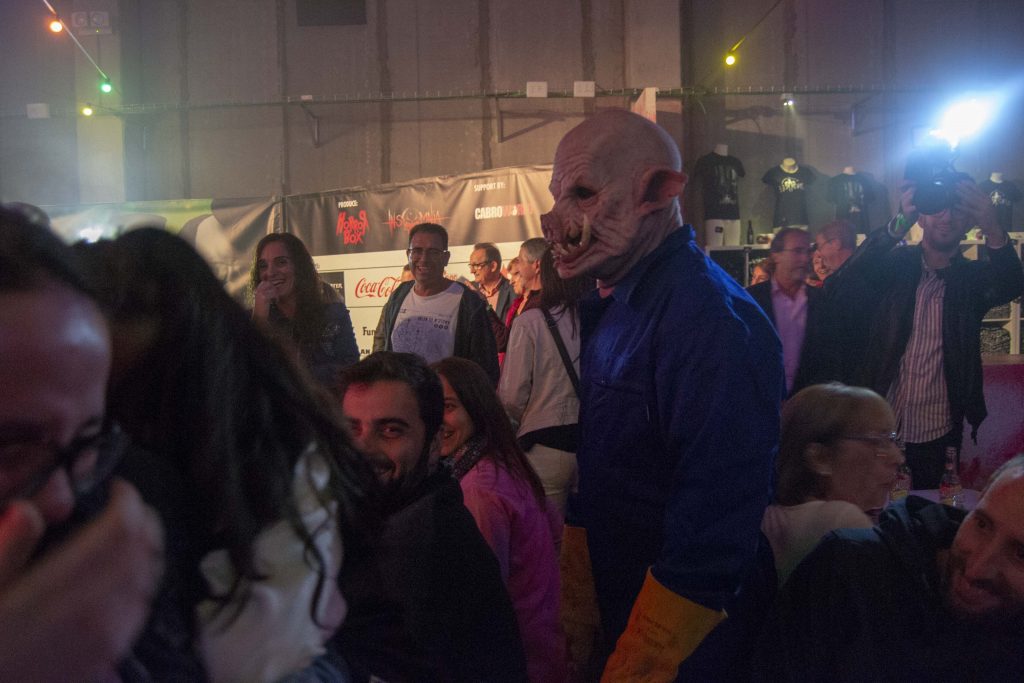 The opening show featured a dance act on Horrorland’s single, a speech by the mayor of the town and the directors of the park. Then, the ribbon cutting was officially done with chainsaws! 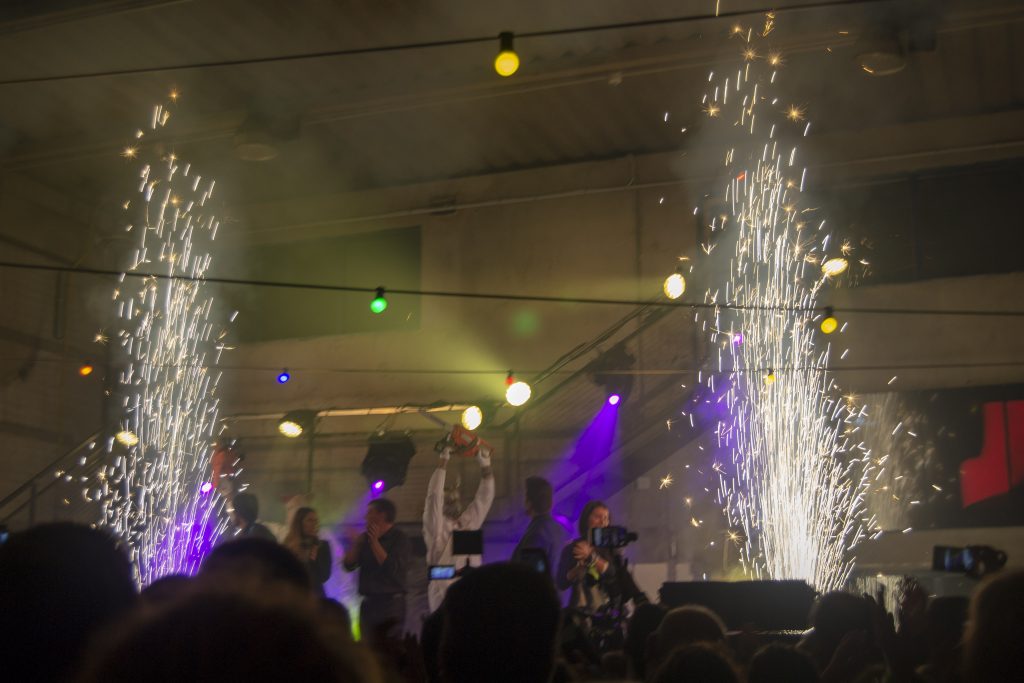 At that moment we were able to go outside and discover all the haunted houses, and so we started with Aquelarre, a maze where we enter with our eyes covered. But to my great regret, it was such a disappointment.

The idea is good, I know other Halloween events worked with this concept, but here just felt empty. As we go blind, we’re forced to follow a rope, but nothing happened during most of the time. I wondered that if your sight sense is not present here, they would work on giving something for the other senses, just like smells, heat, cold, or sound effects. I only felt some actors touching me on the first meters, and then cricket sounds and plants grazing me as we supposedly were on a forest. But that’s all. I was expecting for something to happen but it never came. That’s why this haunted house failed to meet my expectations.

The pre and post scenes, despite being the best part of the house, also fall short. The actors were great and I appreciate that the creatives looked for an “excuse” to use the sleep mask, but it just wasn’t scary regardless the cool animatronics. 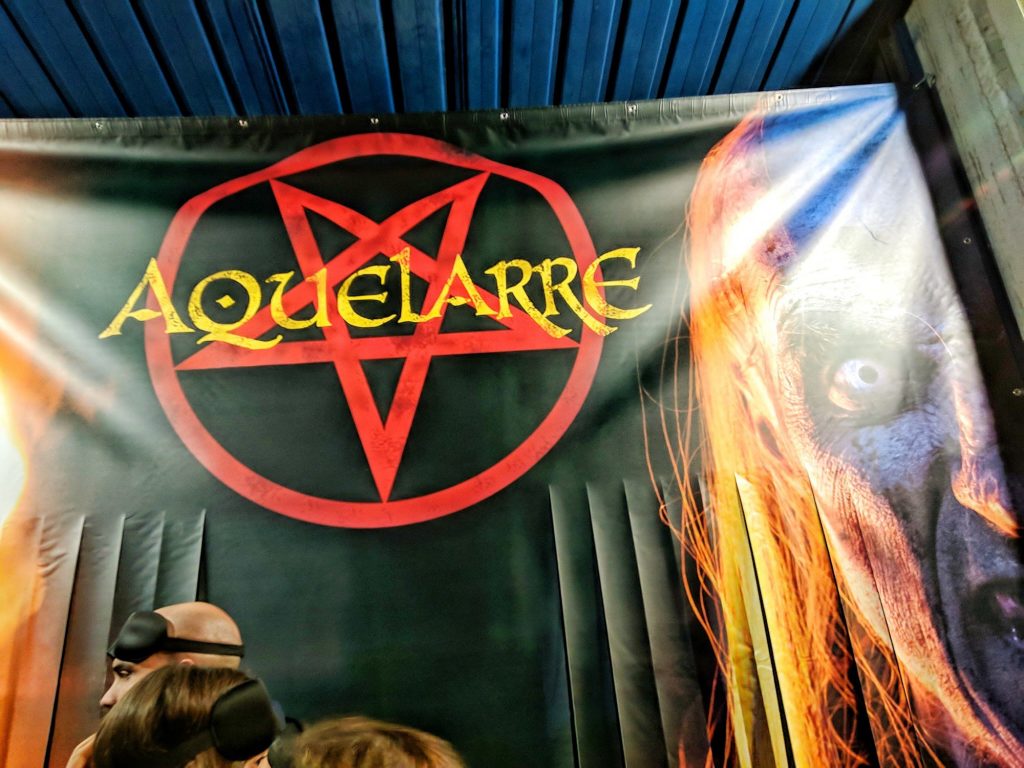 Hoping for the next maze to be better, we entered the queue for La Térmica, a more traditional haunted house with a start that got on my nerves and some really original scenes! I really enjoyed this haunted house and the theming was amazing. The concept, unique to the venue, felt very accurate. 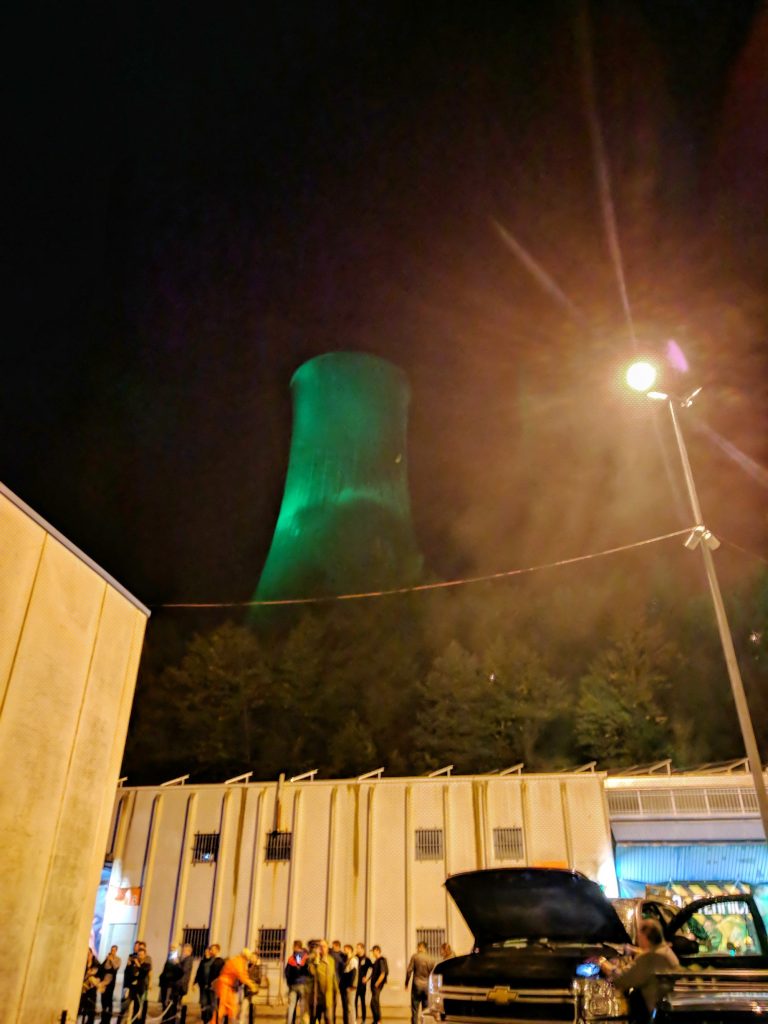 The third maze we did was Matadero. And OMG. This was a CRAZY experience. In this haunted house you decide if you want to “interact with the actors”, as we were told on the entrance. This time we entered in groups of 6 and we were free to decide if we wanted this feature or not. We thought about this twice but we finally decided to do it! And I don’t regret it, it was amazing and scarier than I would ever imagined. Chainsaws and 2-meter-tall-people were present. The intensity of the actors, the solid theming and the effects like strong smells (yay!) made this maze my favorite of the event. I really felt battered and abused, which is in some way the reflection of this maze. 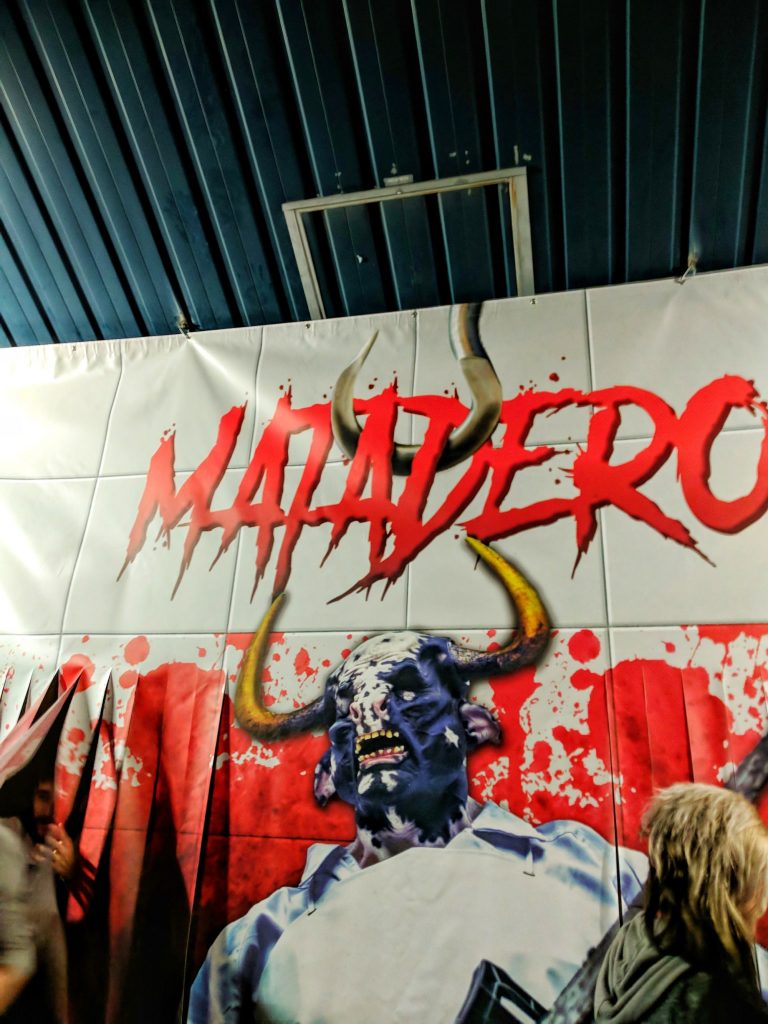 Some actors were roaming by the streets entertaining guests on the queues and stopping for a photo op. I really appreciated that, the masks were amazing looking and some of the characters represented the theming of the mazes. It’s kind of a preview of what you’ll find inside. 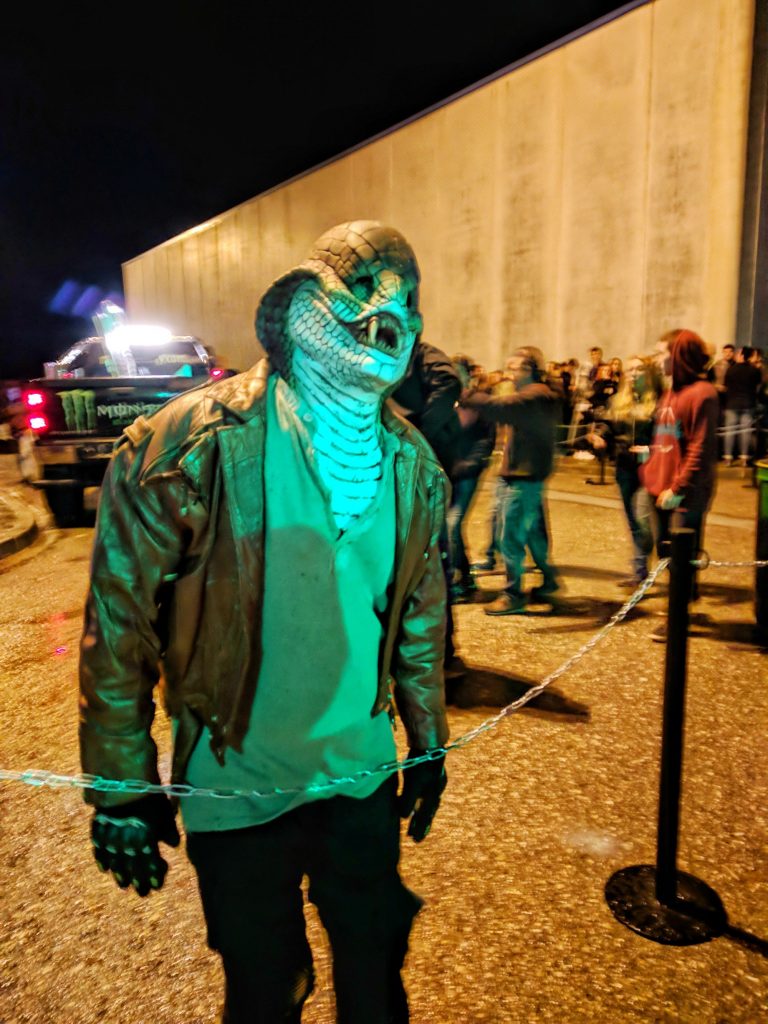 Mortimer, the park mascot, was also available for a scary pic! 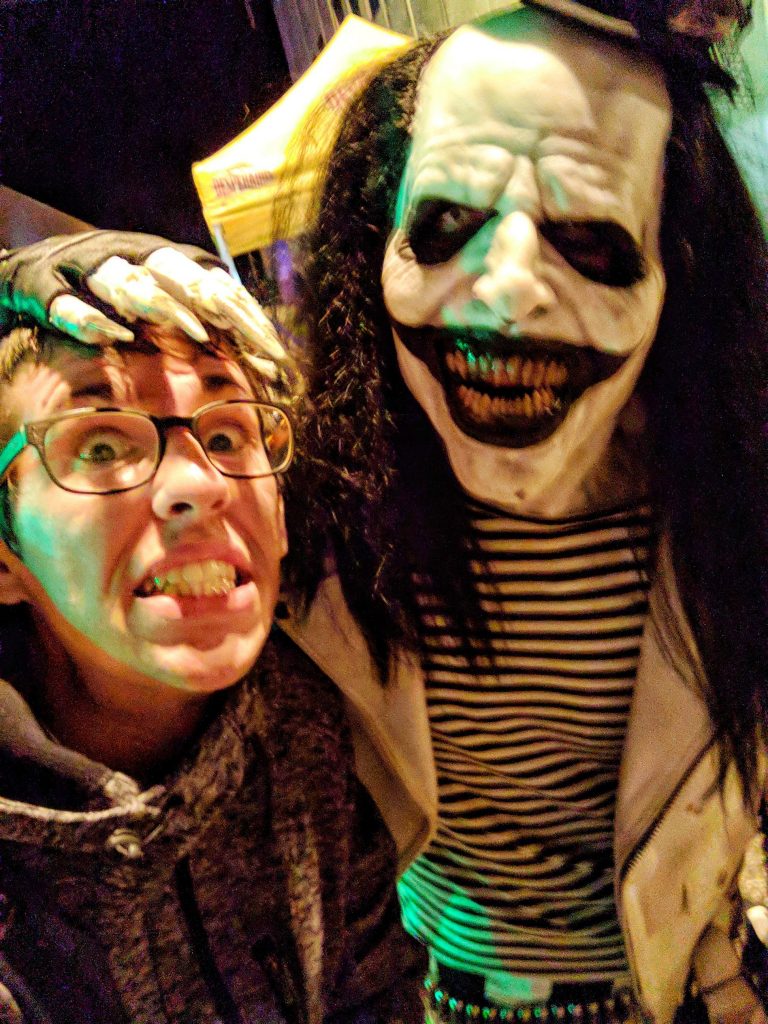 Despite the theming inside the haunted houses was good, the exteriors were awful. There was no props or fog, the lighting could be more elaborate to create an ambiance and the music was too low. Also a scare zone was announced but that meant the characters roaming through the whole park, which is rather small in size, but enough for this event. 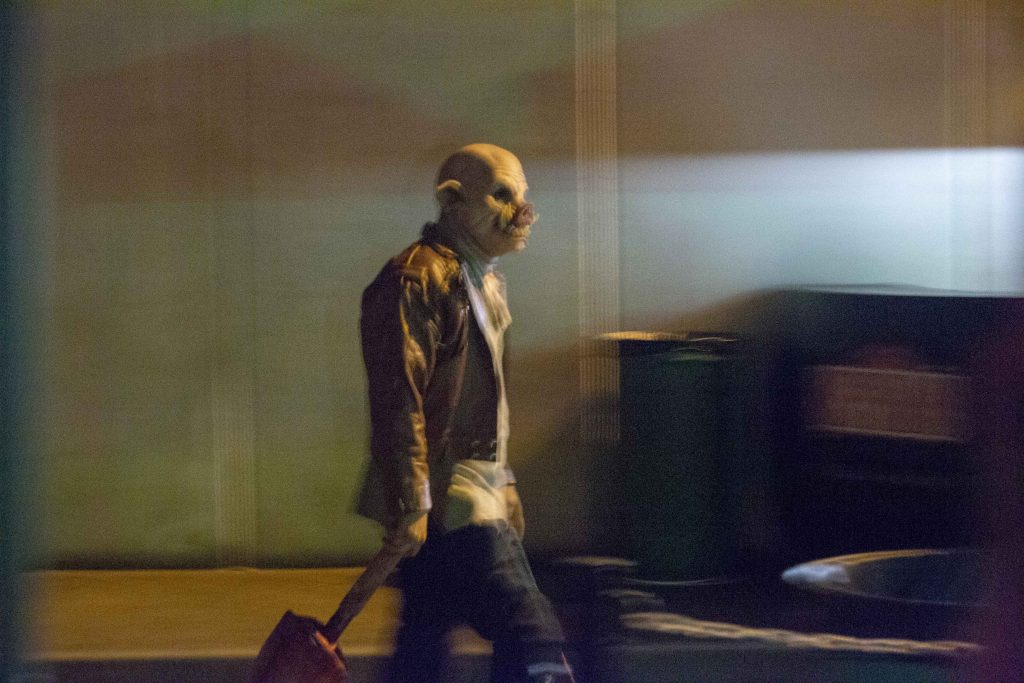 Unfortunately, at this point I had to leave because the next day I had an exam and a long night-drive home… 🙁 Luckily, I was back 2 days after to fully discover the whole park and the mazes I had left!

Before leaving, we had some food and beverages. The prices were fair, but the offer is very limited and simple. Hot dogs, hamburgers, sandwiches, french fries and snacks were the gastronomic choices. 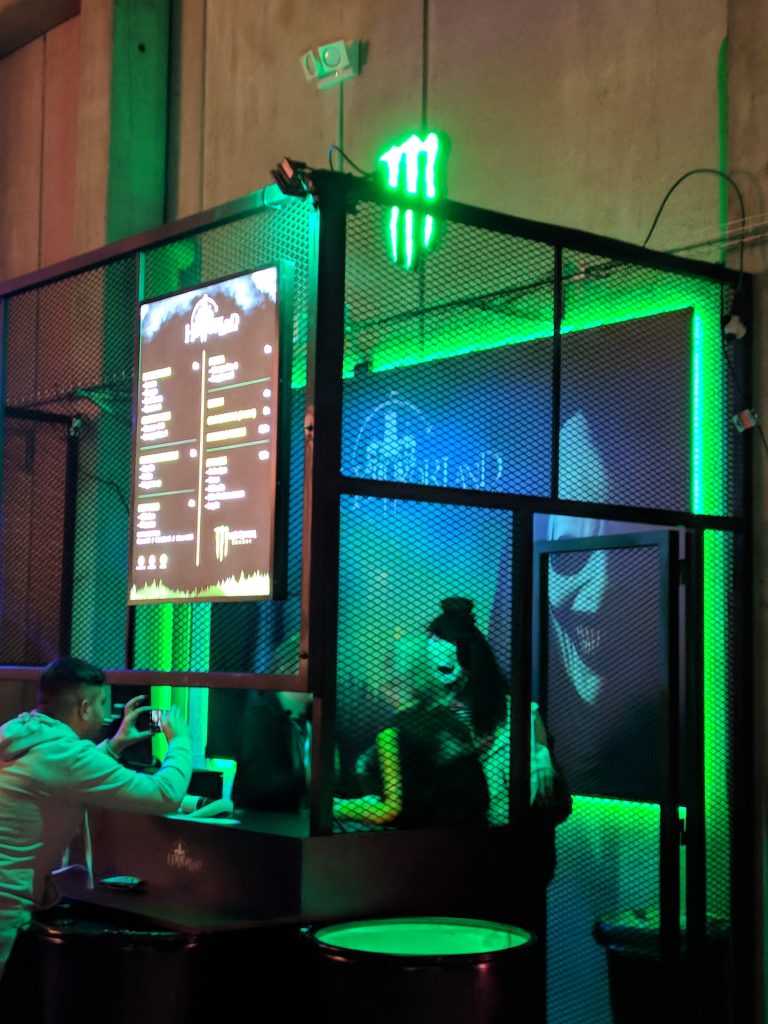 Continue on Page 2 read about the missing mazes and how the park worked once it was fully open!