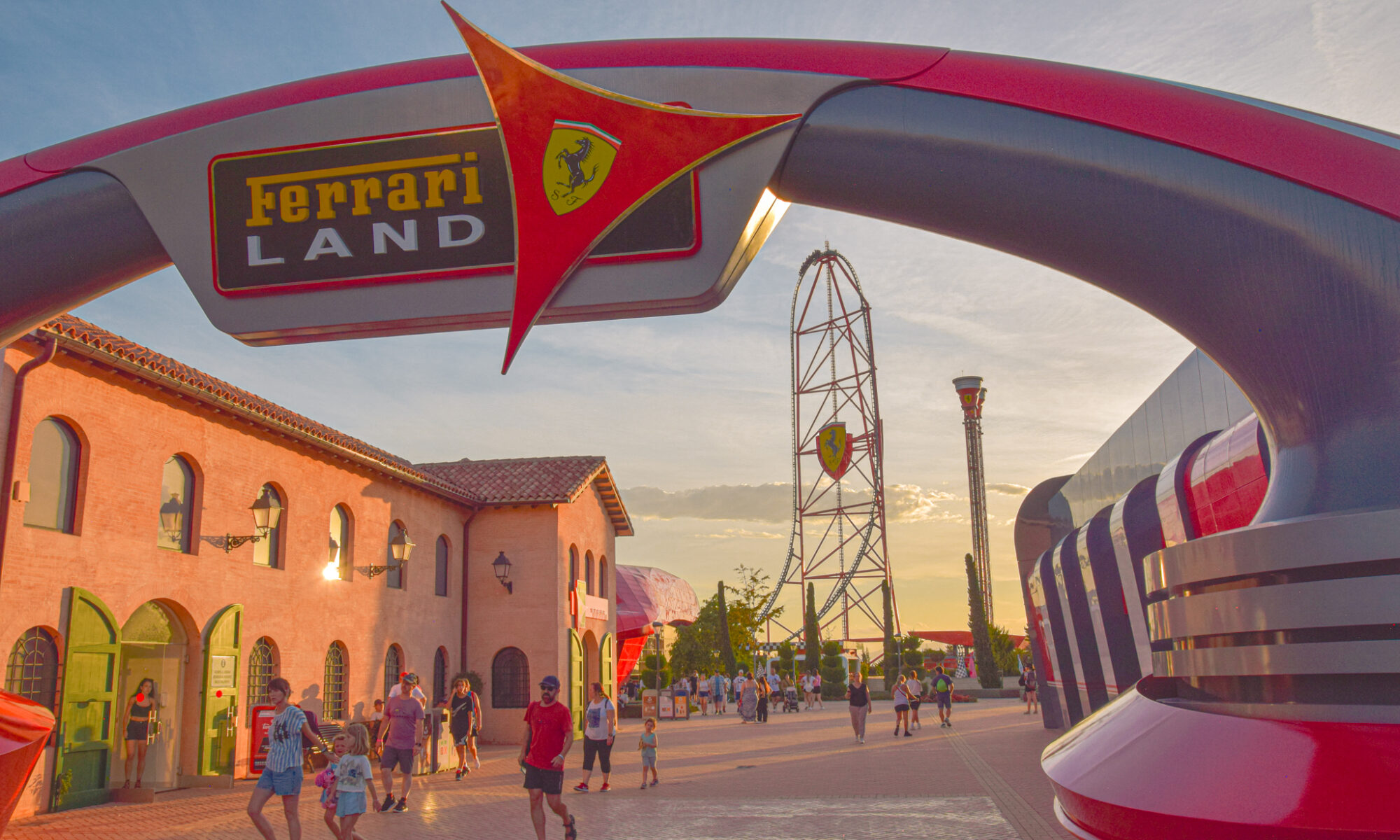 When Port Aventura debuted in 1995, the park’s focus on natural and historic beauty earned it a reputation as one of the top parks in the world. Twenty years and several management changes later, the resort was poised to bring a second gate online; the theme – of all things – an automobile company. Conceptually shallow and profoundly indulgent, Ferrari Land gave PortAventura fans whiplash from the day it was announced – but was it really as bad as it seemed?

Upon approach, Ferrari Land seems innocent enough. The architecture is a hasty-looking take on Italian, but it’s fine if you look only in passing. Guests soon collide with a modernist blob of a building, home to two major theater-based attractions: Racing Legends, a “Back to the Future”-style motion simulator ride, and Flying Dreams, a straightforward flying theater.

The two theater rides share a large indoor queue area, which has a sort-of dance club aesthetic featuring synchronized light schemes and projection mapping in varying states of decay. The numerous pre-shows that preceed each attraction feature clashing themes of timetravel, globe trotting, a secret agent-esque digital laboratory, and more – the only common thread being equal parts Ferrari self-obsession and more decay. How can something be so utterly pretentious and yet so poorly maintained? The rides themselves were remarkable only in their manifestation of the flimsiness of the park’s theme.

The obvious bread-and-butter of this operation, Red Force, is the only thing here whose substance exceeds that of a intellectual property billboard. The coaster is good, and a must-do for Intamin fans, but nothing an intercontinental coaster enthusiast hasn’t seen before. Fans of rides like Stealth at Thorpe Park will find that improved reliability is a reasonable trade-off for exchanging hydraulics for LSMs, but the record-breaking height and top speed are debatable compensation for the underwhelming launch.

The park quickly settles into an identity that is both cheap and overpriced, with the manufactured hype surrounding the brand laboring to bridge the gap between what you paid, and what is actually there to ride or do. Tertiary rides like the S&S Thrill Towers and the Maranello Grand Race (a family car ride) are a paint-by-numbers approach to fleshing out a park, which is highlighted by the strength of the park next door. Why does Thrill Towers even exist when one of the world’s greatest drop towers is at PortAventura? Because it’s something to do.

All in all, Ferrari Land is a baffling misfire. If audacity alone could win awards, the park would be in great shape. Instead we have a tacky, expensive product that is rapidly crumbling from both inadequate maintenance and inferior construction. For all components but Red Force, Ferrari Land is only ironically enjoyable – like a major motion-picture that is so impossibly bad it becomes comedic in spite of itself (I’m looking at you, Cats (2019)). For Intamin completists, those with a morbid curiosity of bad theme parks, and perhaps even someone with a sympathetic interest in Ferrari, the park is probably a worthy diversion for anyone already visiting PortAventura – all others need not apply.

Don’t miss our video of the experience!