Demon is an Arrow Dynamics multi-looper with a twin coaster at Six Flags Great America. Both coasters are identical (track-layout wise), and have a layout featuring two vertical loops and a double corkscrew. This was not the case however, when these coasters first opened. They opened under the name Turn of the Century in 1976, and did not feature the two vertical loops. Rather two airtime hills. After the 1979 season, the airtime hills that originally followed the first drop were replaced by vertical loops, artificial rock formations were installed as themed elements to the new theme and branding. The coasters took the name they still go by today: Demon!

Getting back to our California version… As riders approach the entrance of the queue, they will attempt to make out the ride’s layout through the landscaping that surrounds it.They will then walk past a sign that reads “ Demon”. 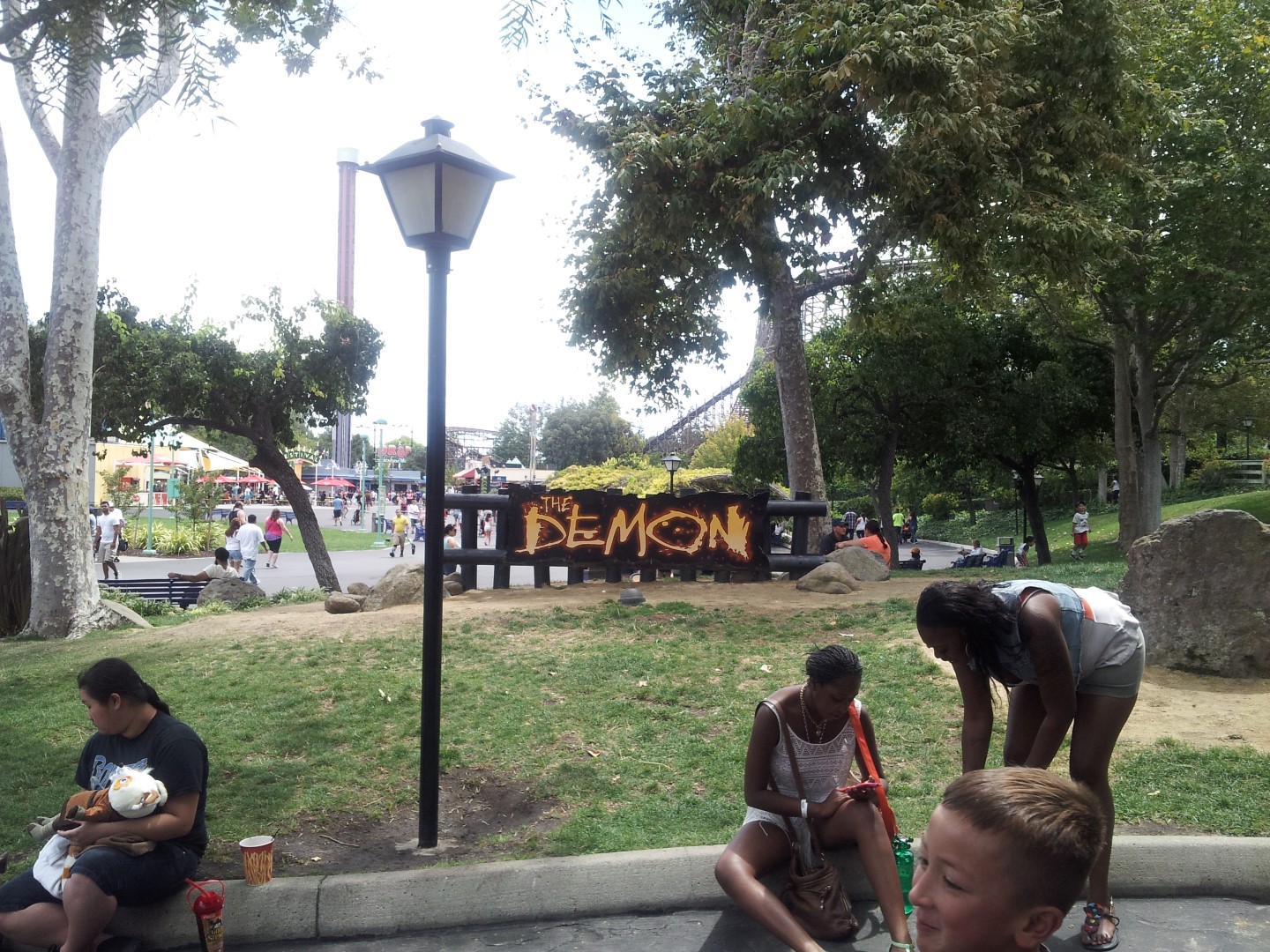 Guests will walk down a path leading to a set of switchbacks. The path, fenced with wooden handrails, passes under the lift-hill. Many guests though, won’t realize it’s the lift they’re passing under, since the rock-like theming around it blocks guests from seeing the track. 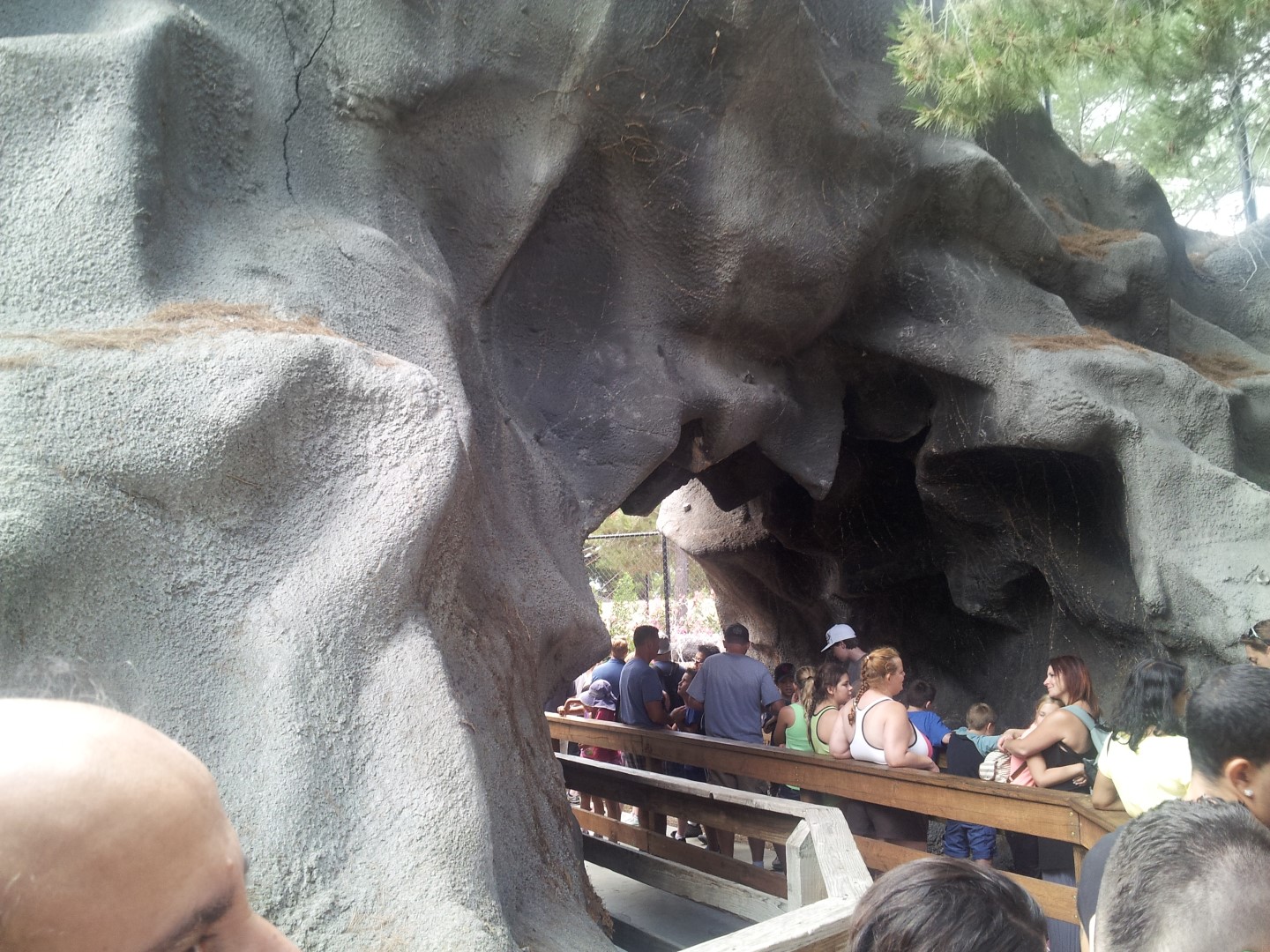 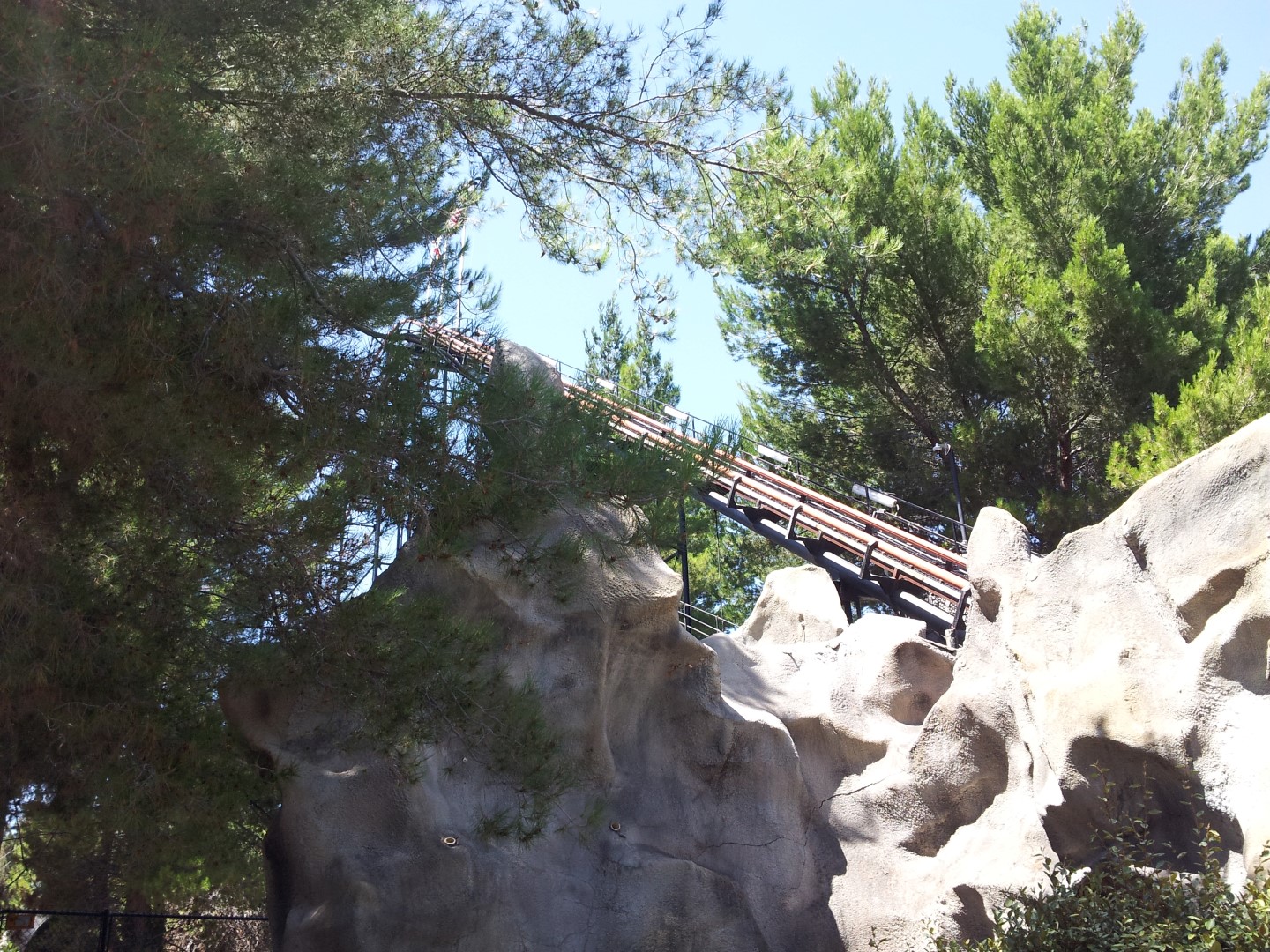 From the switchbacks closer to the station, there is a perfect view of the newest elements of the ride, the two back-to-back vertical loops. The trains seem to whip through them at tremendous speeds, leaving the mesmerized guests wondering what kind of forces could possibly await. 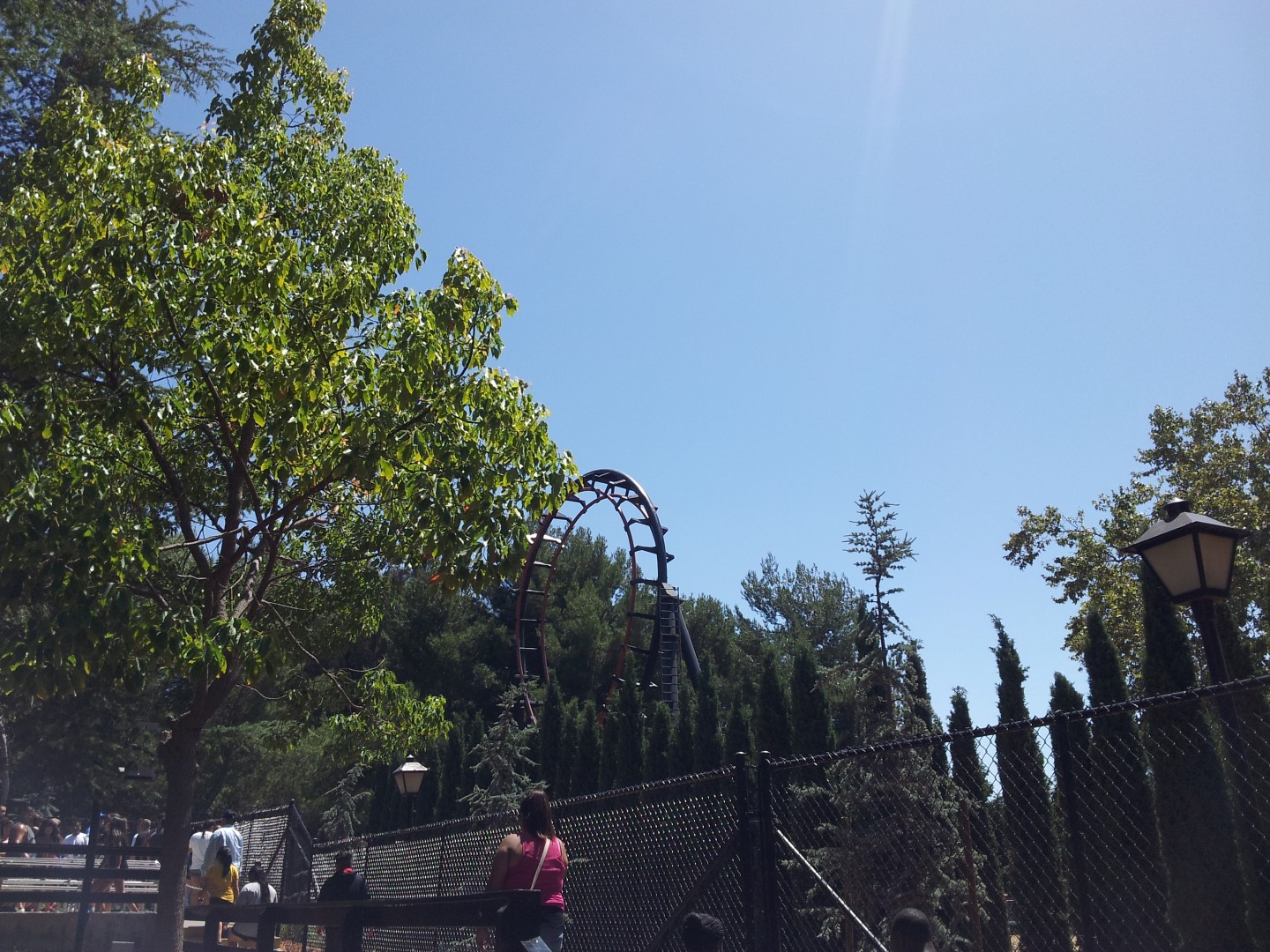 Once the switchbacks are completed, guests will be assigned rows inside the station. The station itself is outdoor, like all steel-coaster stations at California’s Great America, though the air-gates part of the station is covered by a wooden structure. Once the gates open, riders will pass through, cross the train, and will place all loose items in the cubbies for their respective trains. They then take a seat in the classic Arrow trains, which are a lot smaller than Viper’s newer generation Arrow Looper trains, have their restraints and attached seat-belt checked, and they’re off! (Note to tall people, just like on the newer Arrow trains, request to sit in the front row of a car. There’s not a lot of space anywhere in the older generation Demon trains, but its definitely better than the back rows of each car).

As the train leaves the station, the train enters a dark tunnel before emerging to climb the 102 ft tall lift hill. The tunnel used to have flashing blue lights, these are still turned on, though only a very little part of it still works. Look for it next time you ride. While climbing the lift hill, guests may notice that the train isn’t going at a constant speed. Rather, this older lift hill mechanism really drags the train, and thus the train will go faster, then slower for a second, then fast again, so on so forth. 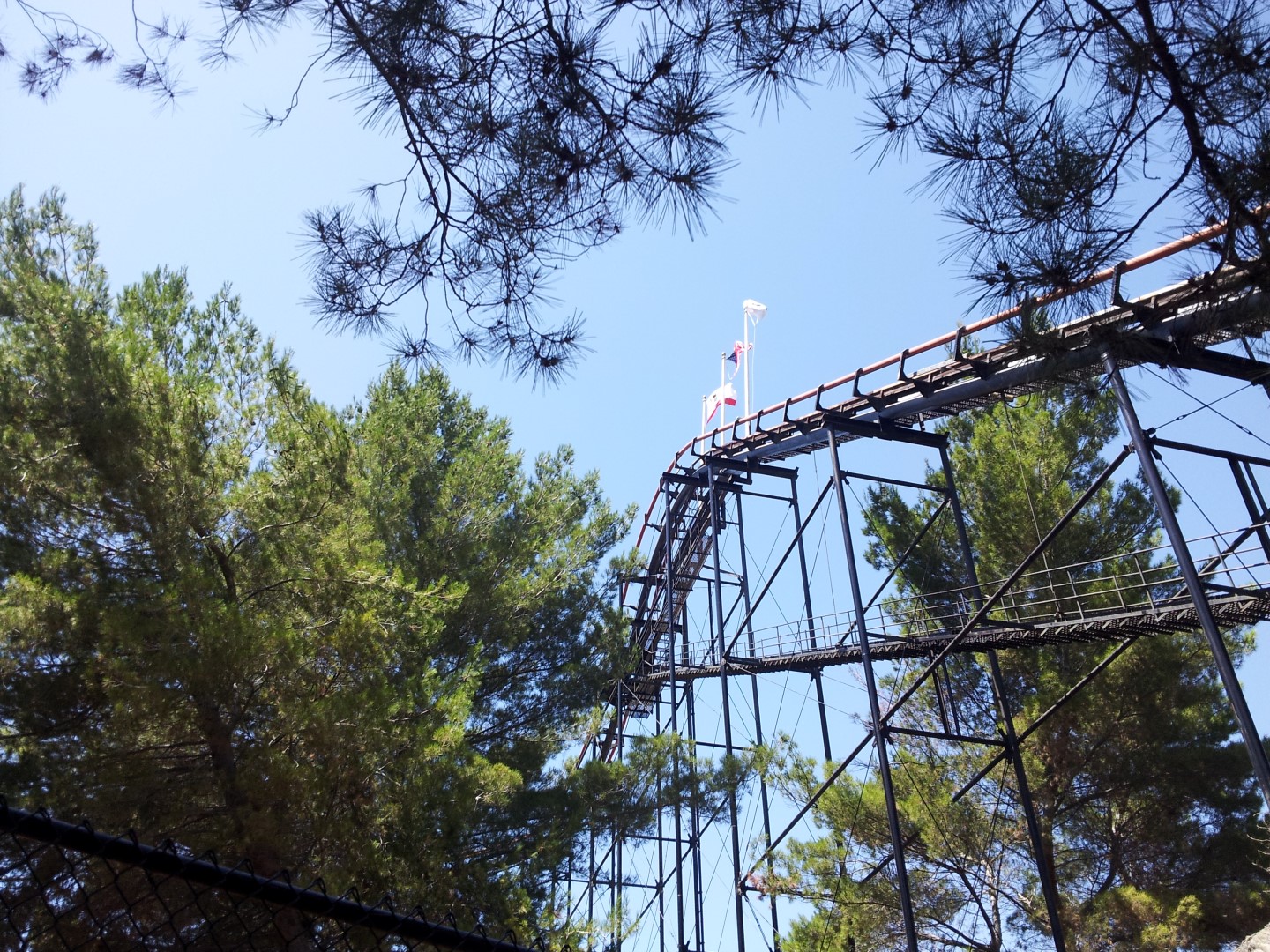 When the train reaches the top, it makes a 180′ degree turnaround, and drops 90 feet at a 54′ degree angle, reaching the top speed of 50 miles per hour. 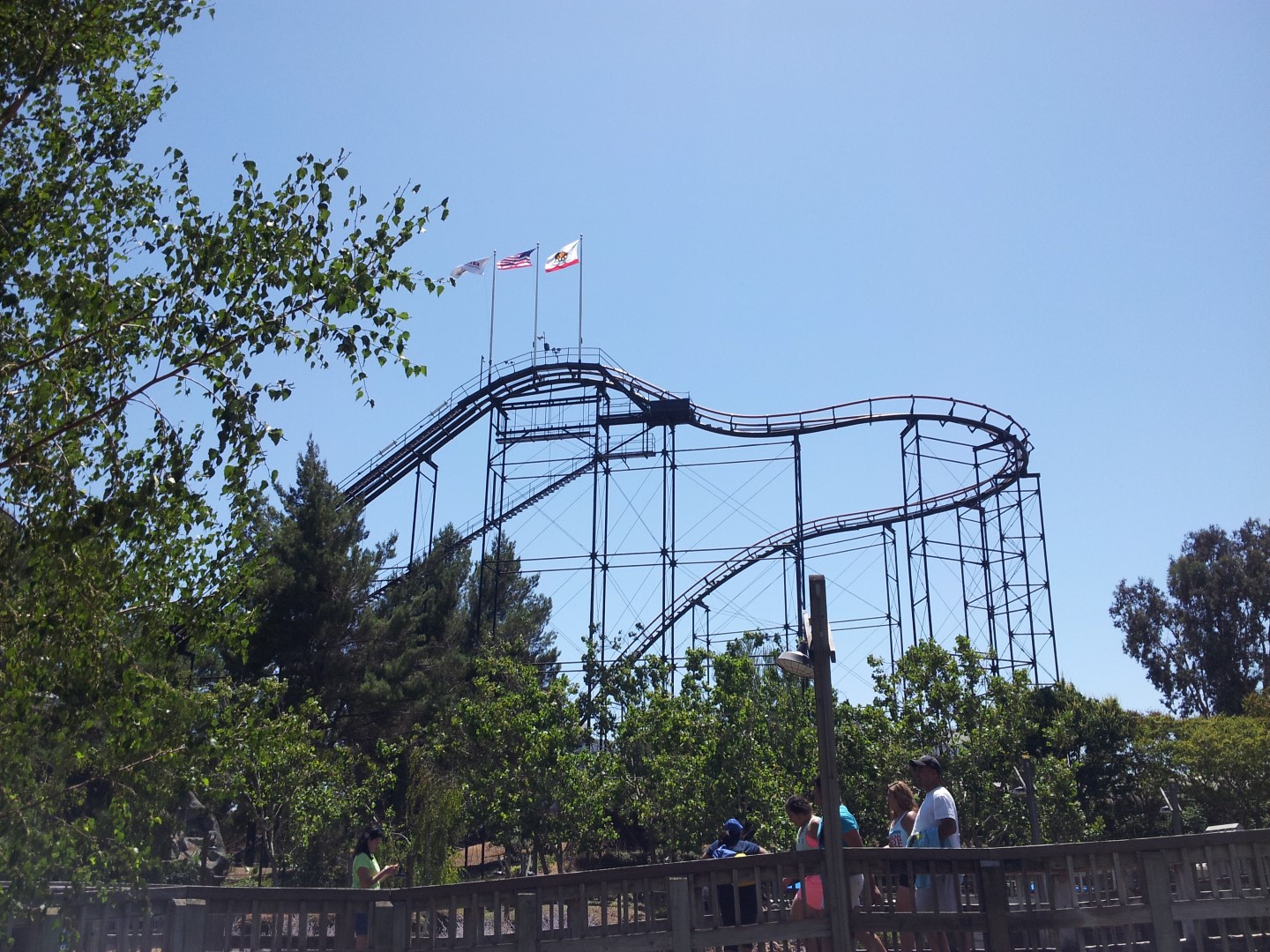 The riders then fly through the back-to-back loops of 70 feet and 55 feet tall, which pull some excellent G’s, and not of the negative variety! Notice that in between the two loops, there’s a small straight section of track, which causes a bit of a rough transition. Remember those forces you were imagining in line while looking at these beauties? Yes, they are just as you imagined them. 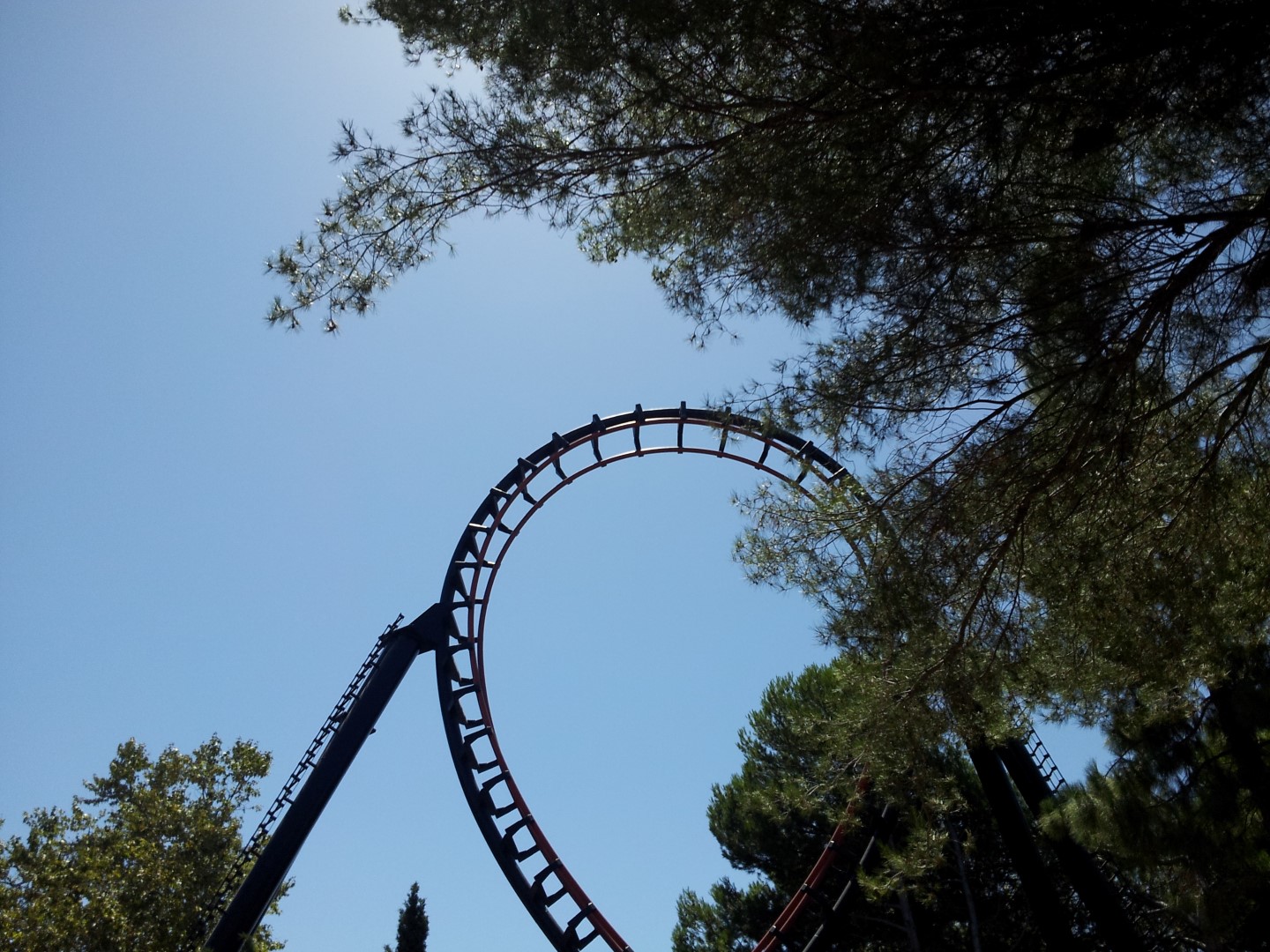 Riders are then enveloped by a tunnel. The tunnel used to light up orange and yellow with the light bulbs inside the tunnel. This no longer happens, though at the Chicago version, these lights still work. Riders will exit the straight-sectioned dark tunnel and then rise into the second turnaround. Before the train rolls into the second half of the ride, a block brake section, used more as a trim, slows the train down slightly, if at all. A small drop follows and then, the ride’s “new” name becomes very apparent. The trains are swallowed by a humongous rock formation that is the head of, yes you guessed it, the Demon! 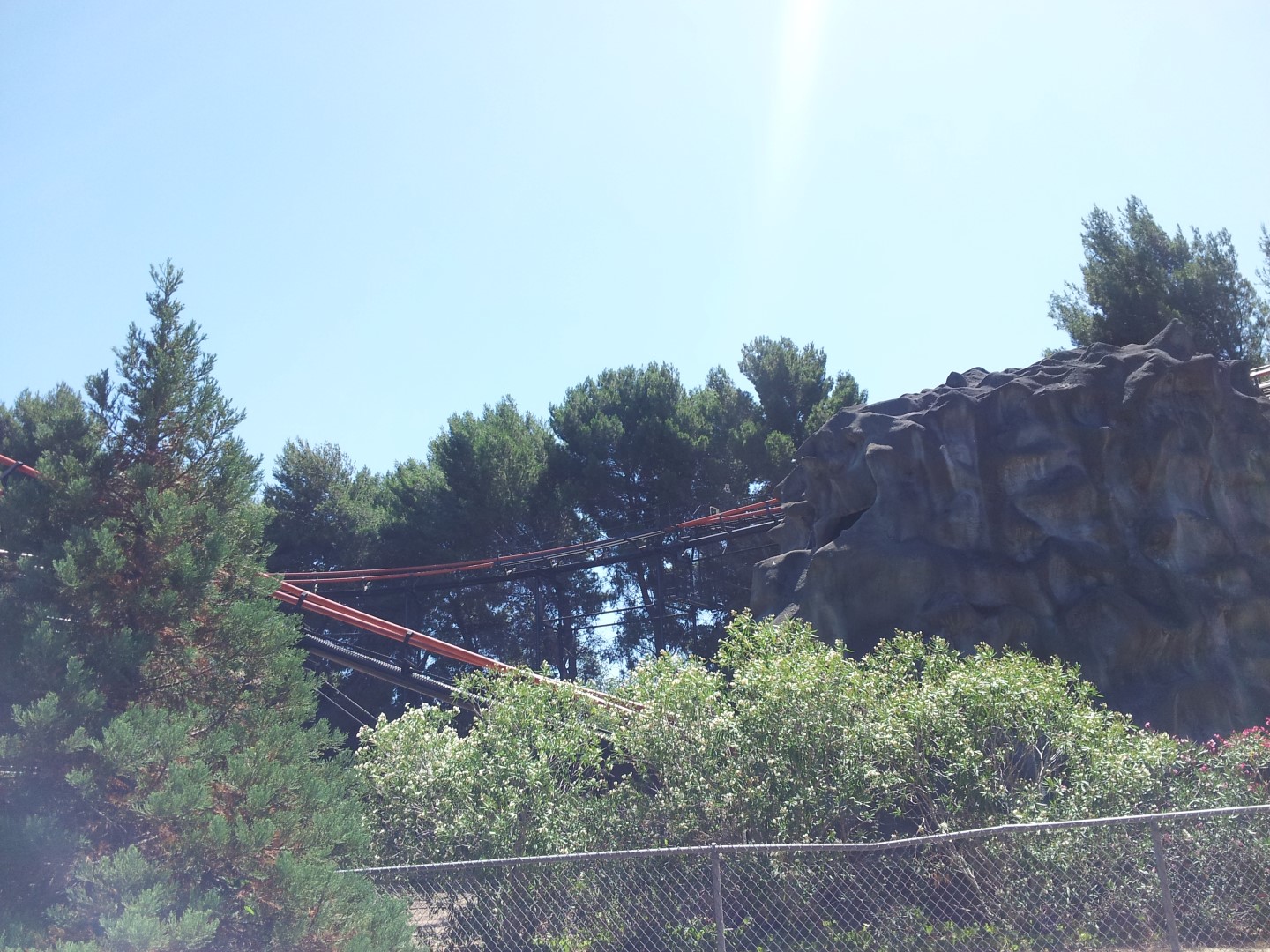 This provides what has got to be one of the best head chopper effects out there. Keeping your hands up throughout this element is not an easy feat. After zooming past a waterfall on the back side of the Demon’s head, the trains maneuver through the rides original signature move, the double corkscrew. The speed with which it spirals through the 35 feet tall corkscrews is amazing! 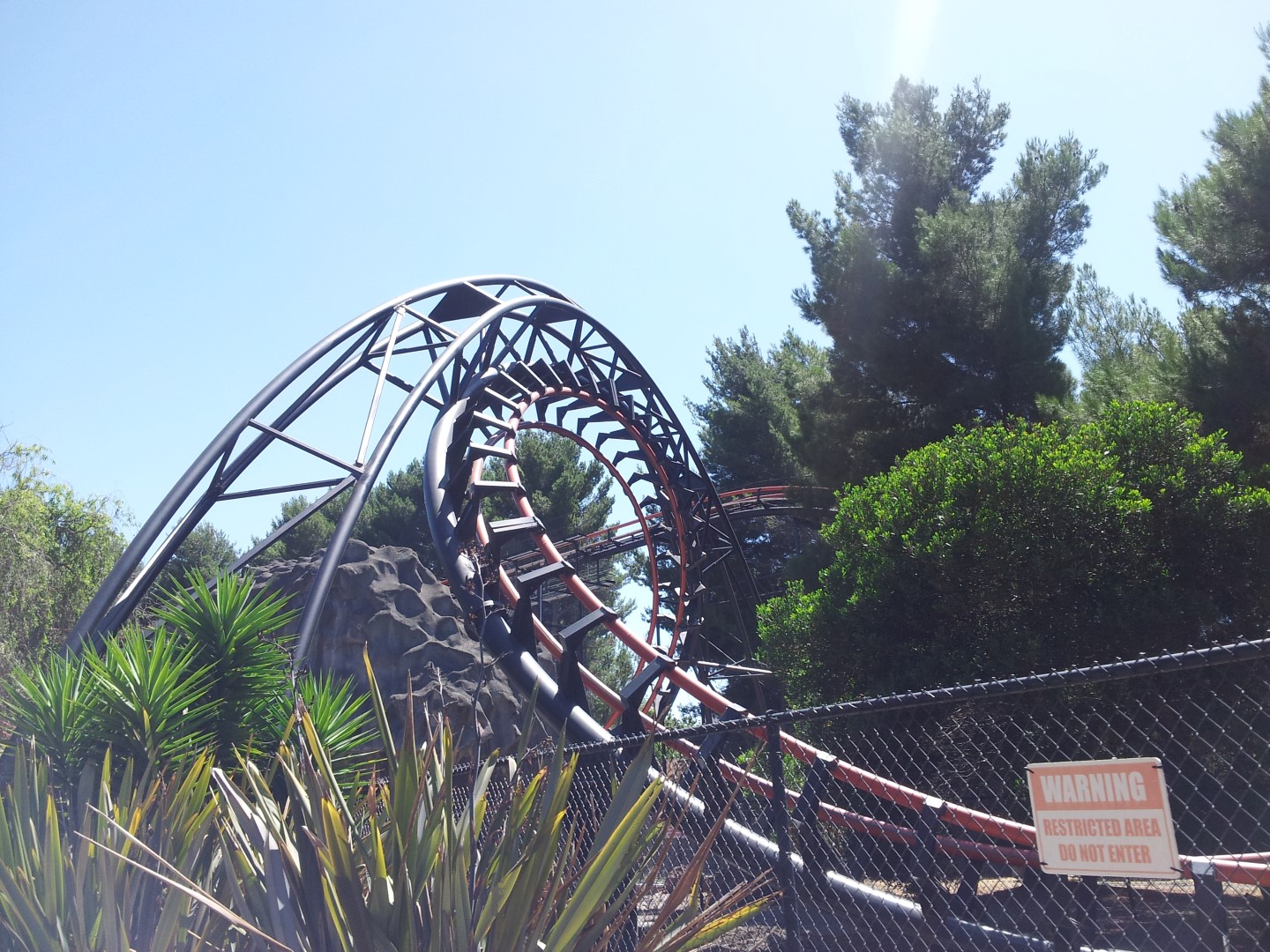 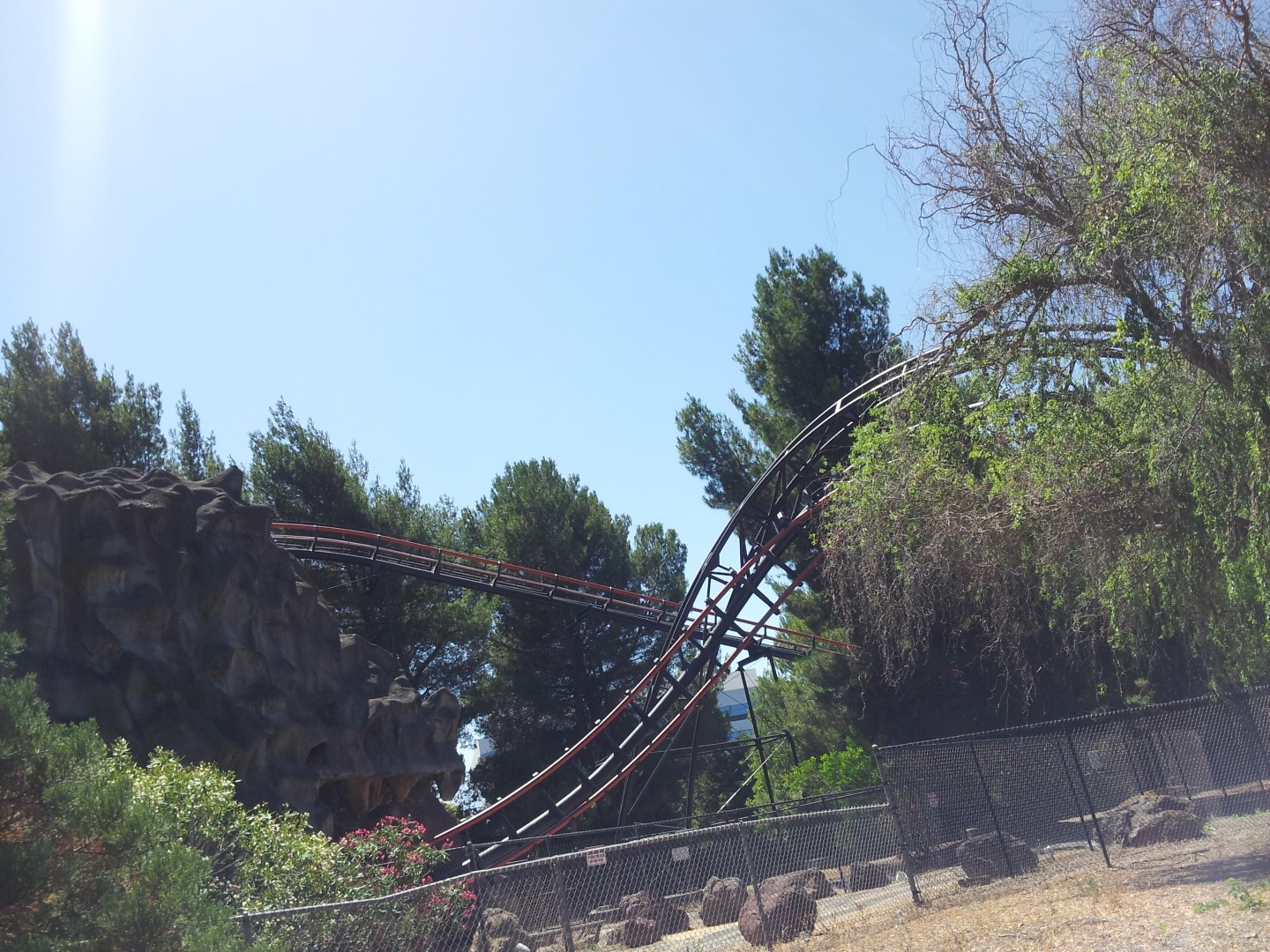 Though tall people must watch out for their knees, and the shorter people for the head-banging, as the transition into the corkscrews is very rough. A great mix of laterals positives and even a hint of airtime are present in the corkscrews, before the ride leads into a funky turnaround, and then slides into the brakes with riders attempting to regain their breath. One final turn onto the transfer track brake section, and the train’s ready to roll back into the station. 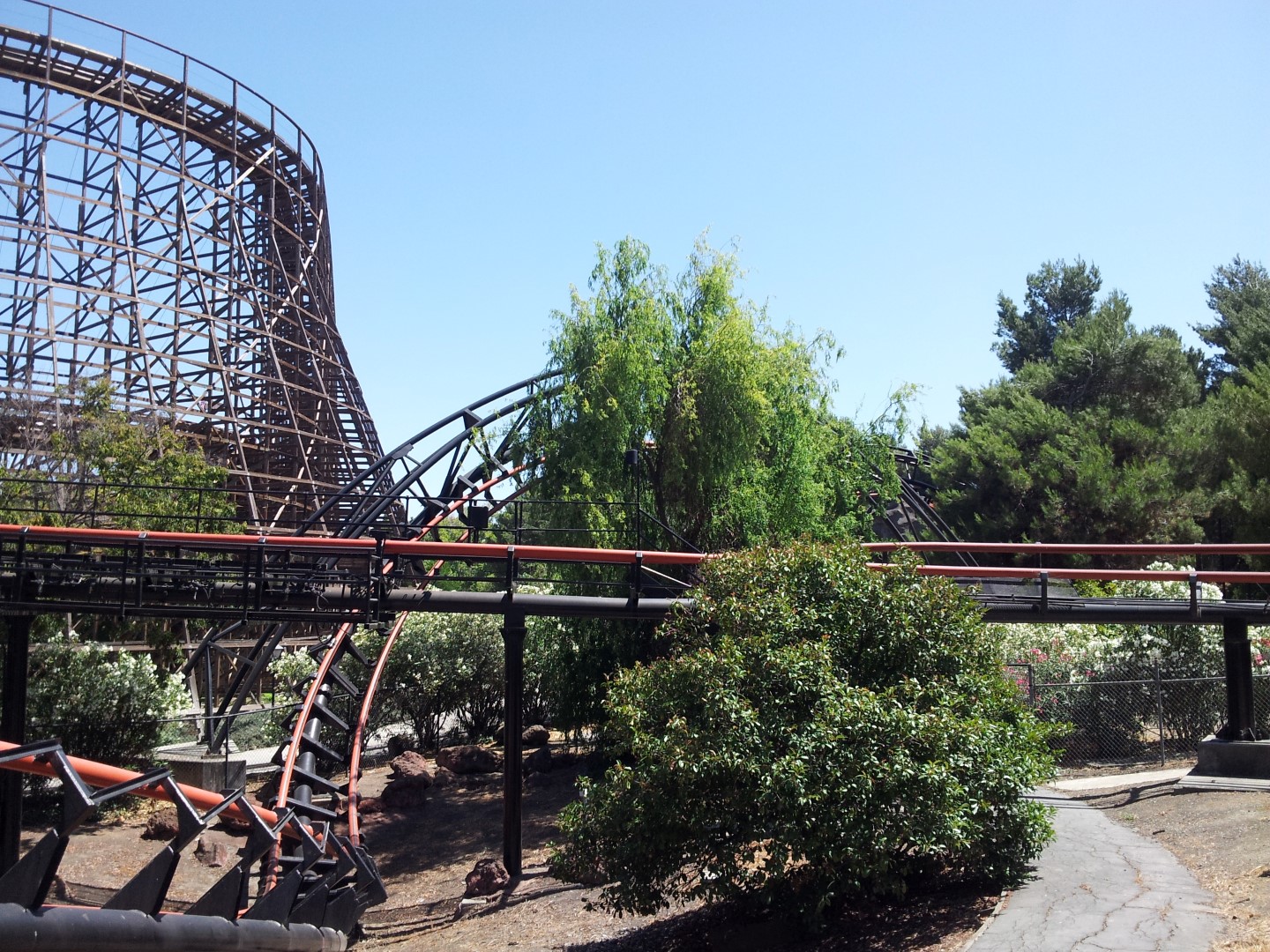 Although this ride often receives criticism for being rough, it isn’t quite as bad as you would think. It can be a bit shaky like almost any Arrow, but especially when taking its age into account, it’s really pretty smooth, and at the very least tolerable. The line-up of elements may not be the most diverse, but that doesn’t necessarily take away from the experience. This is a solid ride, with some good forces, theming, and head choppers. And we actually enjoy it quite a bit. 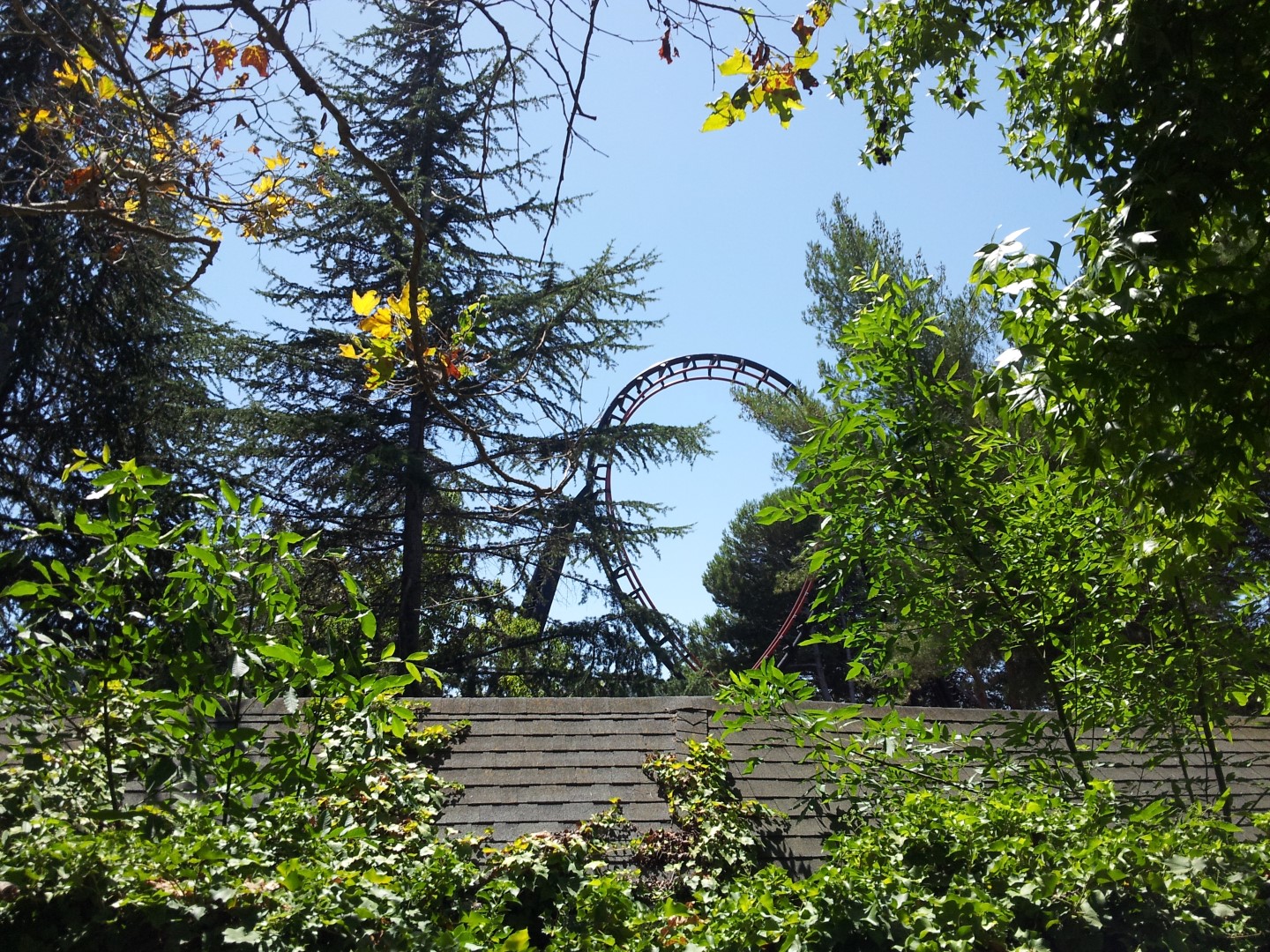 We like to look at it from a different perspective. It’s a classic that still runs very well, gives riders a taste of the older style coasters, and is the clear predecessor to giant loopers we know now. Due to California Great America’s limited coaster collection, it is a must-ride while at the park, especially for first time riders. We may like this classic Arrow, but what do you think? Agree? Disagree? Comment below, and let us know!