We recently visited Blackpool Pleasure Beach, winning 11 awards this year in the theme park awards it’s rated as one of the UK’s top attractions. Having such a large amount of rides in one small park provides something for everyone. Today we are going to rank our favorite coasters!

Now some may disagree with me but Infusion is painful and uncomfortable, making it drop straight to the bottom of our list. This Vekoma Suspended Looping Coaster was originally at Pleasureland Southport and name Traumatizer, which is perhaps a better name for it. Beautifully built and suspended entirely over water, it stands tall in the park and lures you in for a ride. The ride itself is good, it has a lot of features and a very close near miss with the Big Dipper but it just can’t make up for the uncomfortable ride. 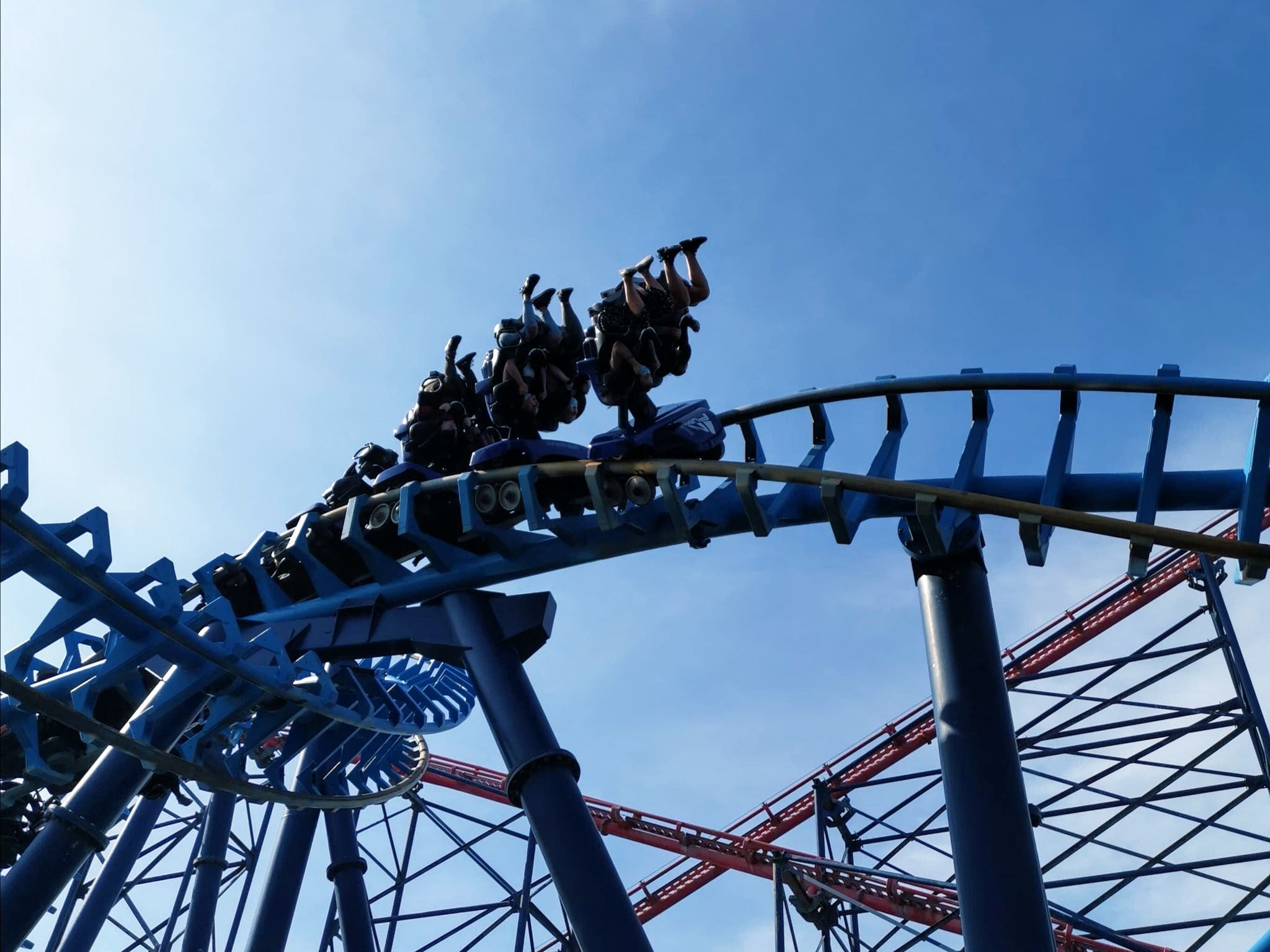 This classic coaster built in 1923 is approaching its 100th birthday and even after refurbishment it still doesn’t quite make it any higher on my list. Attracting huge amounts of guests a day. it remains a very popular ride at BPB. For me it’s a love/hate relationship, I love it because it’s a classic but I hate it because I value my back bones. If you are an enthusiast then you won’t miss the chance to ride this piece of history. It features some great airtime and with the small restraints it feels very thrilling but also very dangerous. For its age it’s to be expected to be rough but even with the cushion lined trains it still can’t make up for the pain. 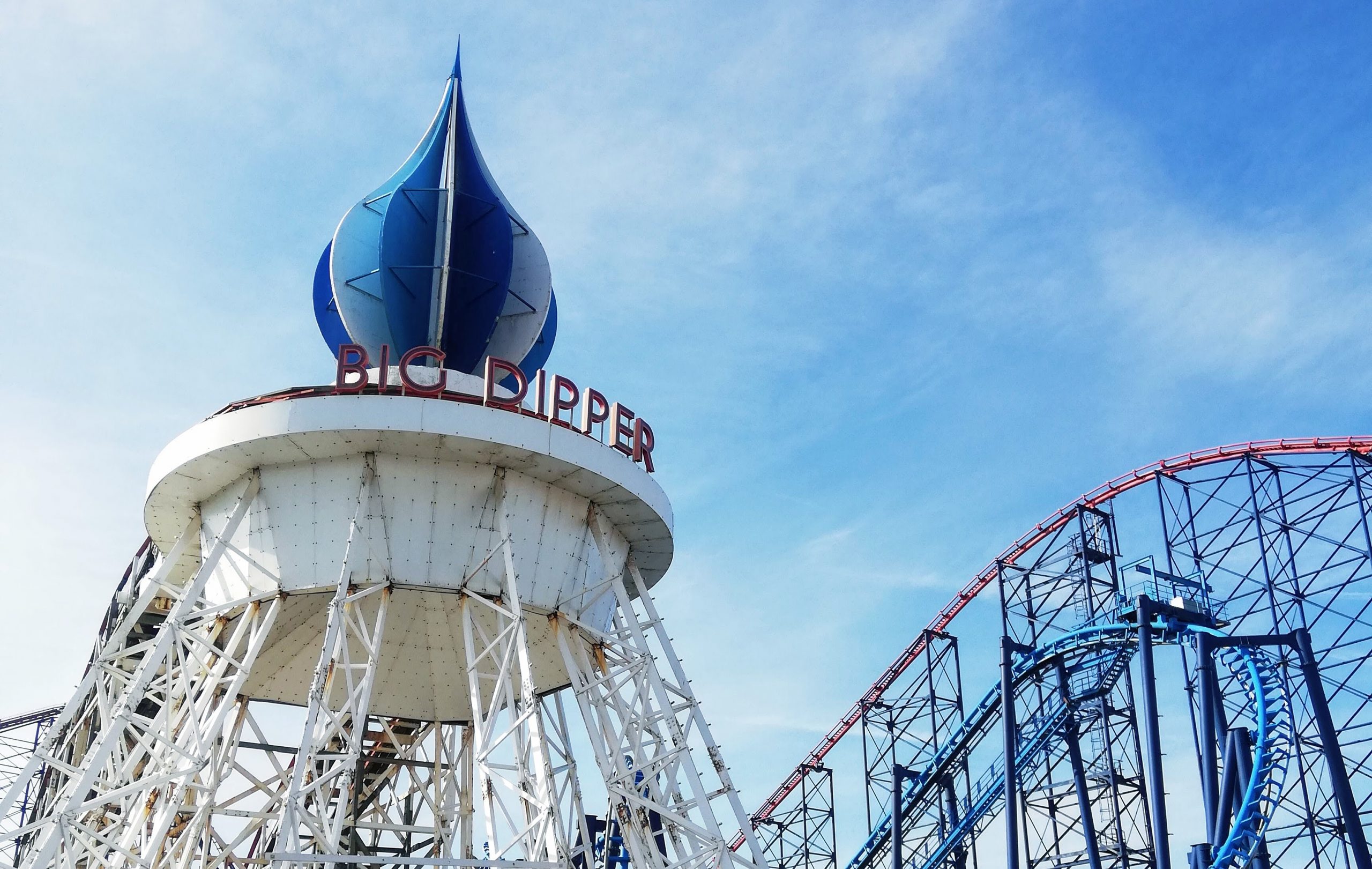 I wanted to put Steeplechase at the bottom of my list but because it’s not really painful to ride, here it is at number eight. Being the only one left in the world of its kind, makes it a must-ride! I have ridden Steeplechase twice and this time that I visited was definitely the last ride for me. I do enjoy the thrill it gives you, sweeping fast around the corners, the little drops and the interaction with the other rides but you have to hang on as they only have a seatbelt to stop you from falling off. It was built in 1977 and officially opened by famous horse Red Rum which makes this another piece of history. 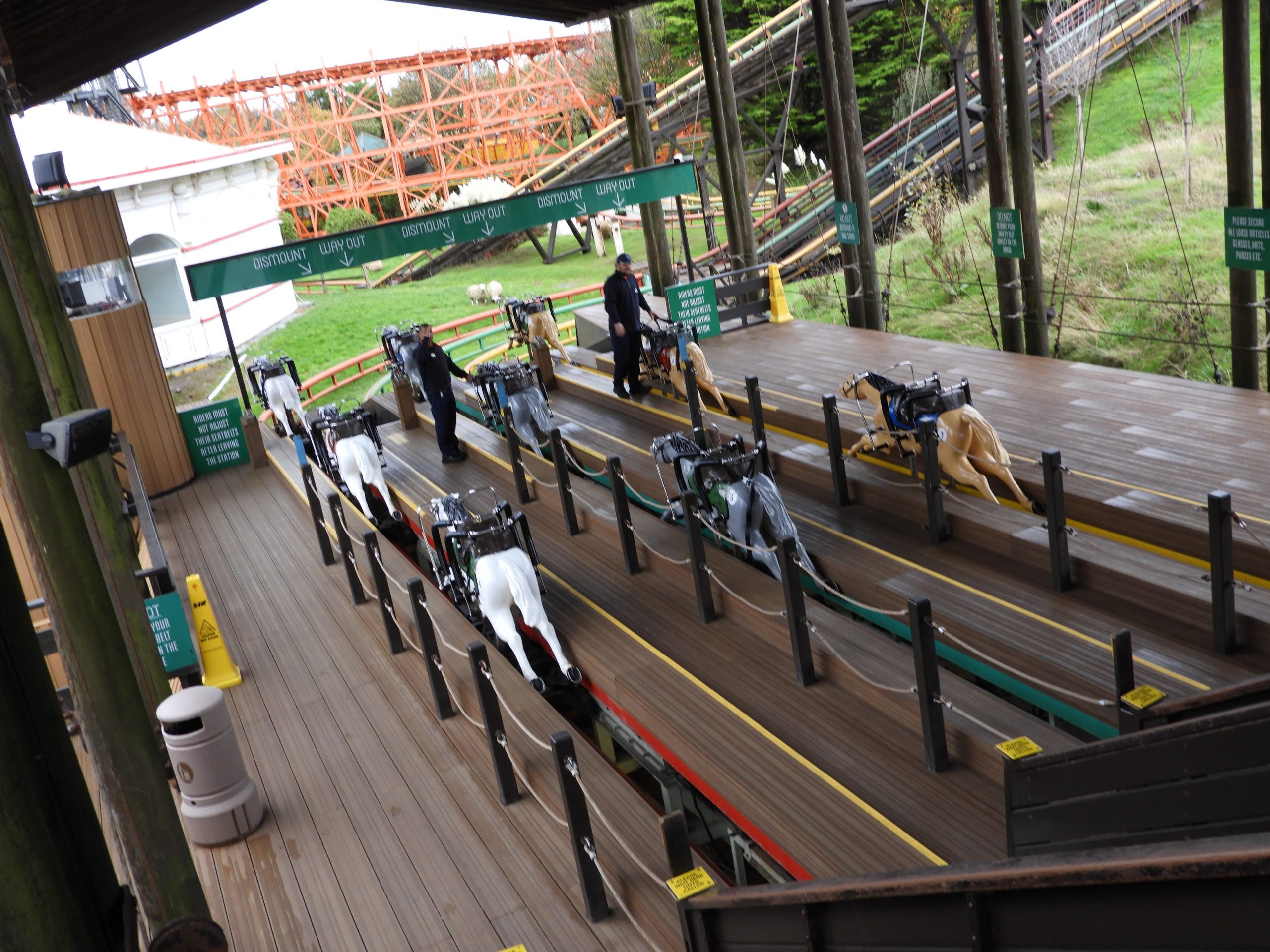 This family coaster is another grade 2 listed building! Built in 1934, it is classic wooden coaster and a great first rollercoaster for kids. Giving a small amount of airtime as it flies over the triple hill and going through the tunnel it is a great and fun ride. Every time I’ve been on it they have always gone for a second or third run as it is quite short. It has been rebranded a few times and used to be sponsored by Walburtons, a family run bakery company. The ride is overall enjoyable, comfortable and is always worth a ride. 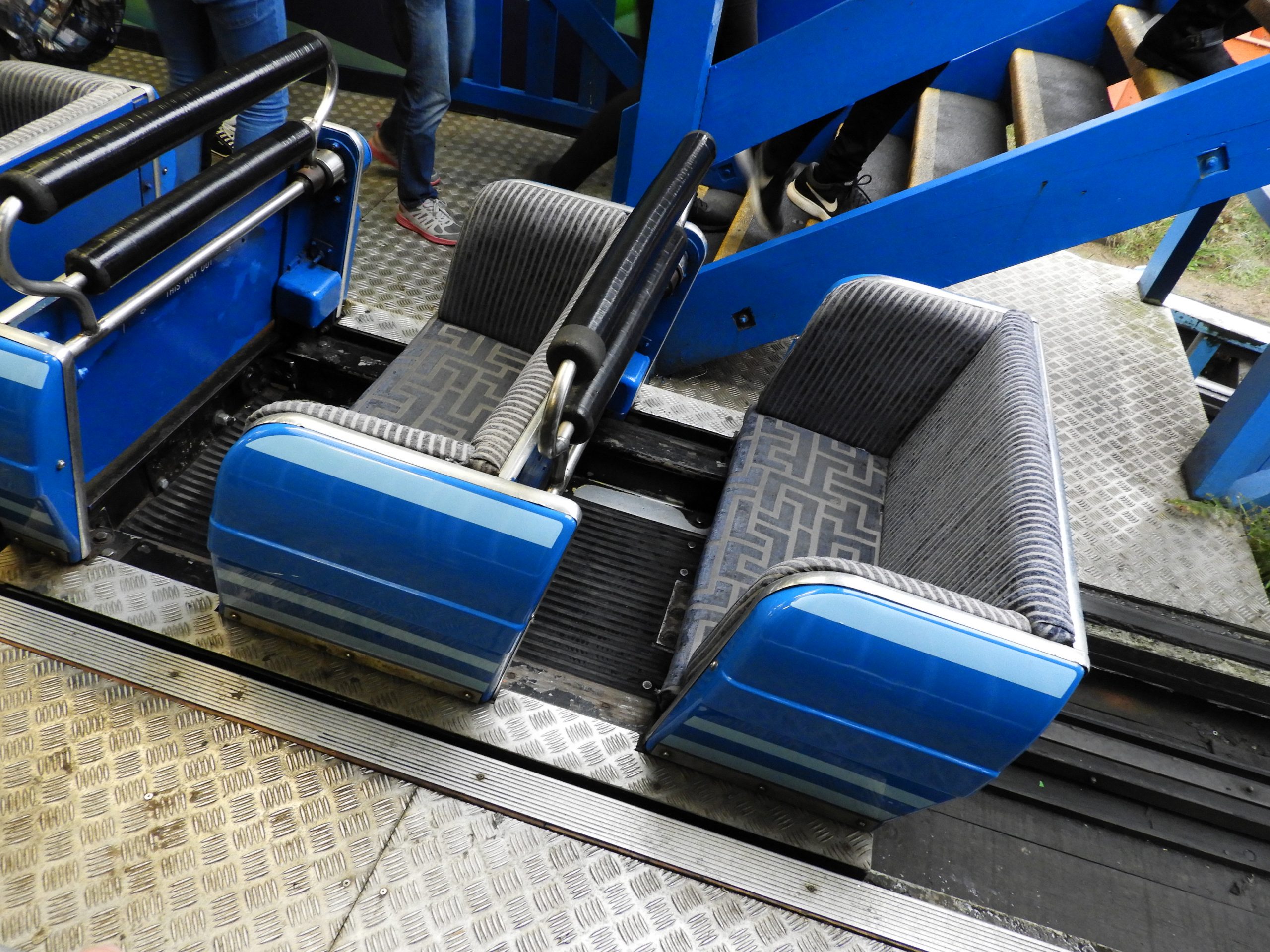 This bobsled coaster is the only one left in the UK, opened officially by Eddie the Eagle in 1988. Designed by Mack, this ride is themed to a bobsled run, which the name implies. The station is a Swiss lodge and the ride is featured on our beloved RollerCoaster Tycoon. I do, however, find the trains uncomfortable and it doesn’t rank as my favorite bobsled coaster either. 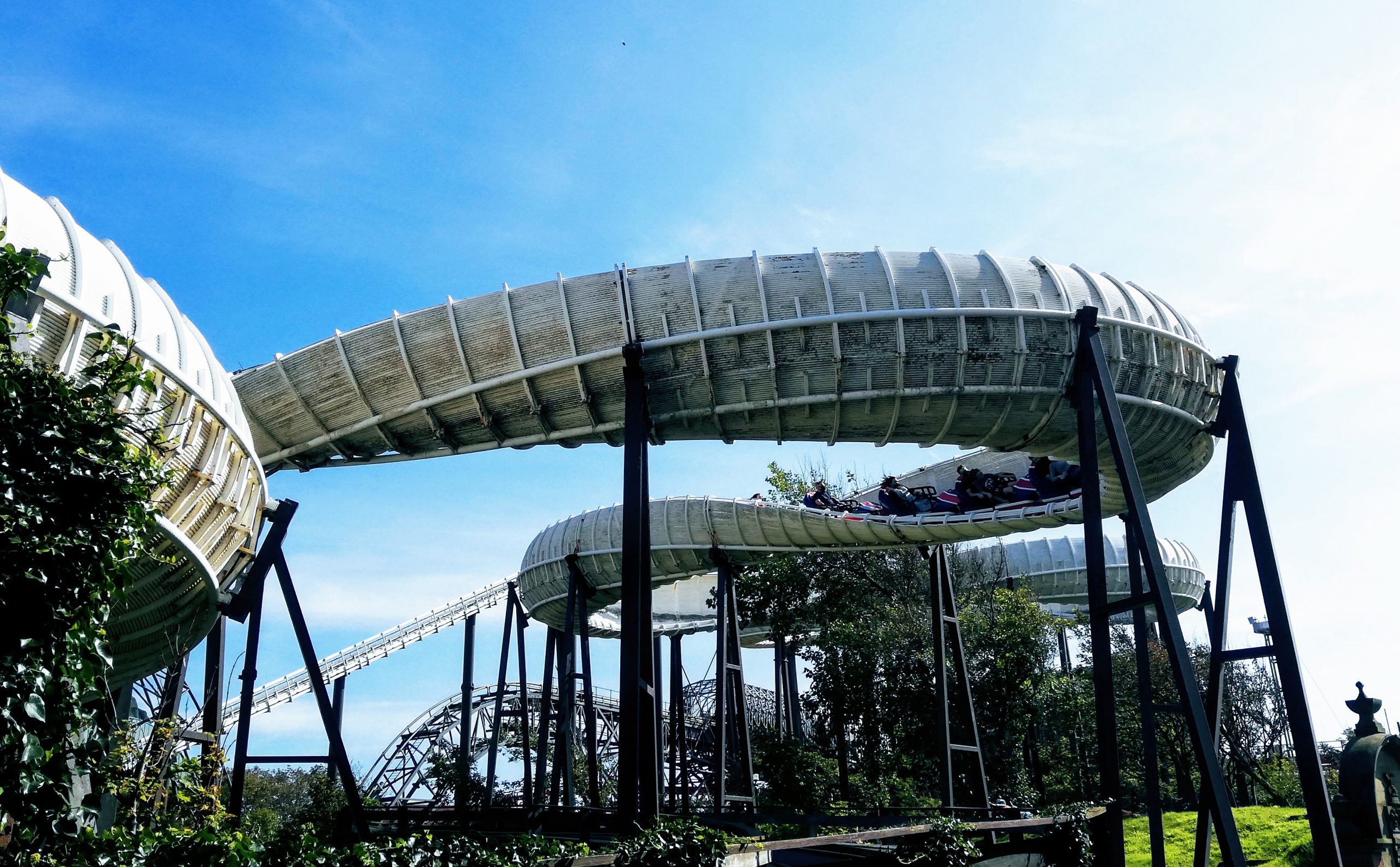 Opening in 1979 as the first fully looping coaster in Europe, Revolution is a firm favorite at BPB. After climbing what feels like a million stairs you get to the station platform where the views of the park are great. Once onboard you a launched out of the station in straight into the loop and into the other station where you are launched backwards and back through the loop again. It’s short and sweet, but a great ride. 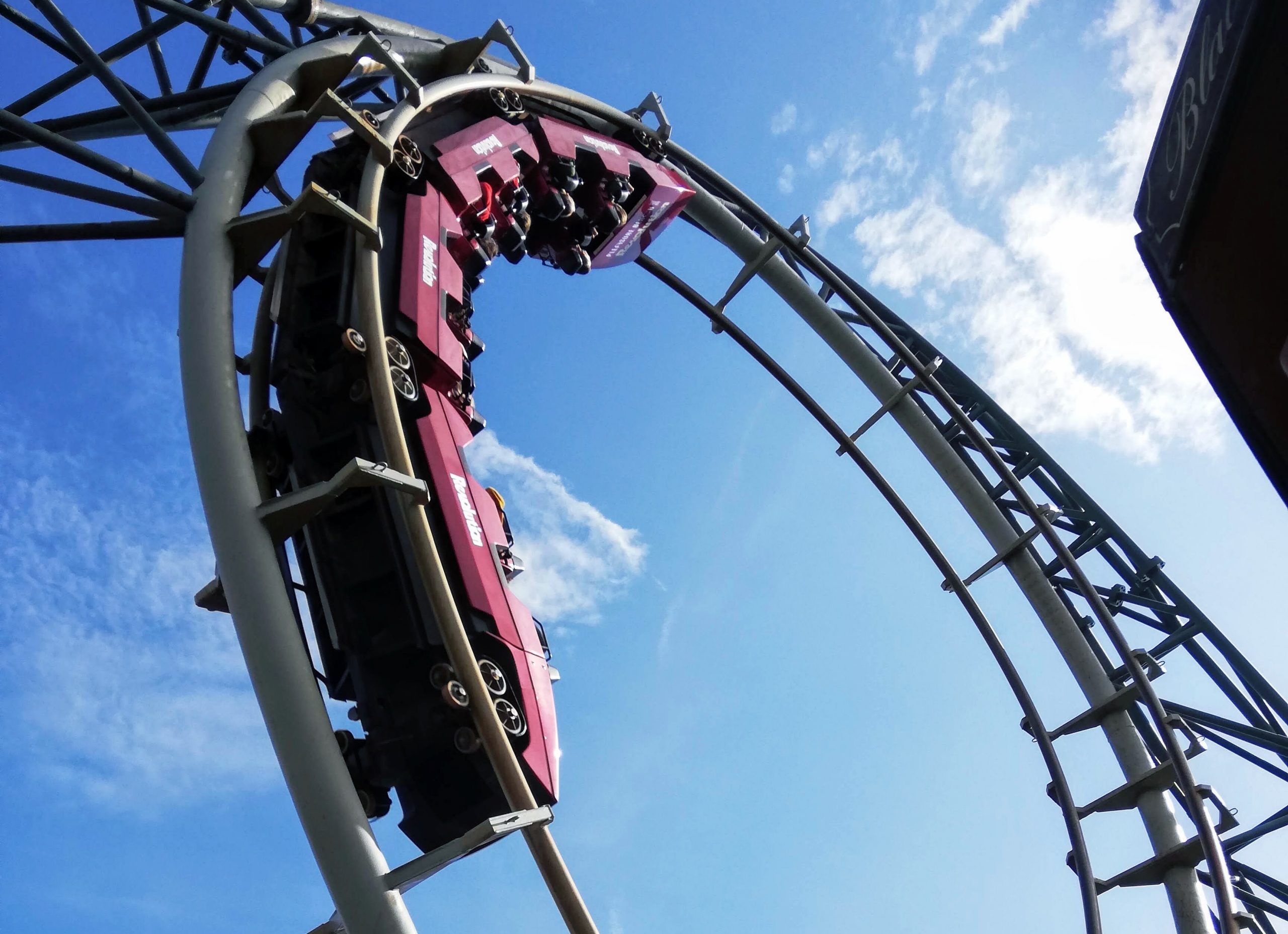 Situated in Nickelodeon Land is this fabulous wooden coaster. Built by Charles Paige (like many of the coasters here) in 1933. It uses parts from the original Velvet Coaster that sat here including the lift hill. This ride originally had no restraints but in 2006 they replaced the trains with trains from the Big Dipper which included lap bars. Nickelodeon Streak ranks at number four because it’s one of my favorites. Reaching speeds of up to 56km/35mph along with great amounts of airtime and nipping around corners, it provides some serious screams from adults and kids. 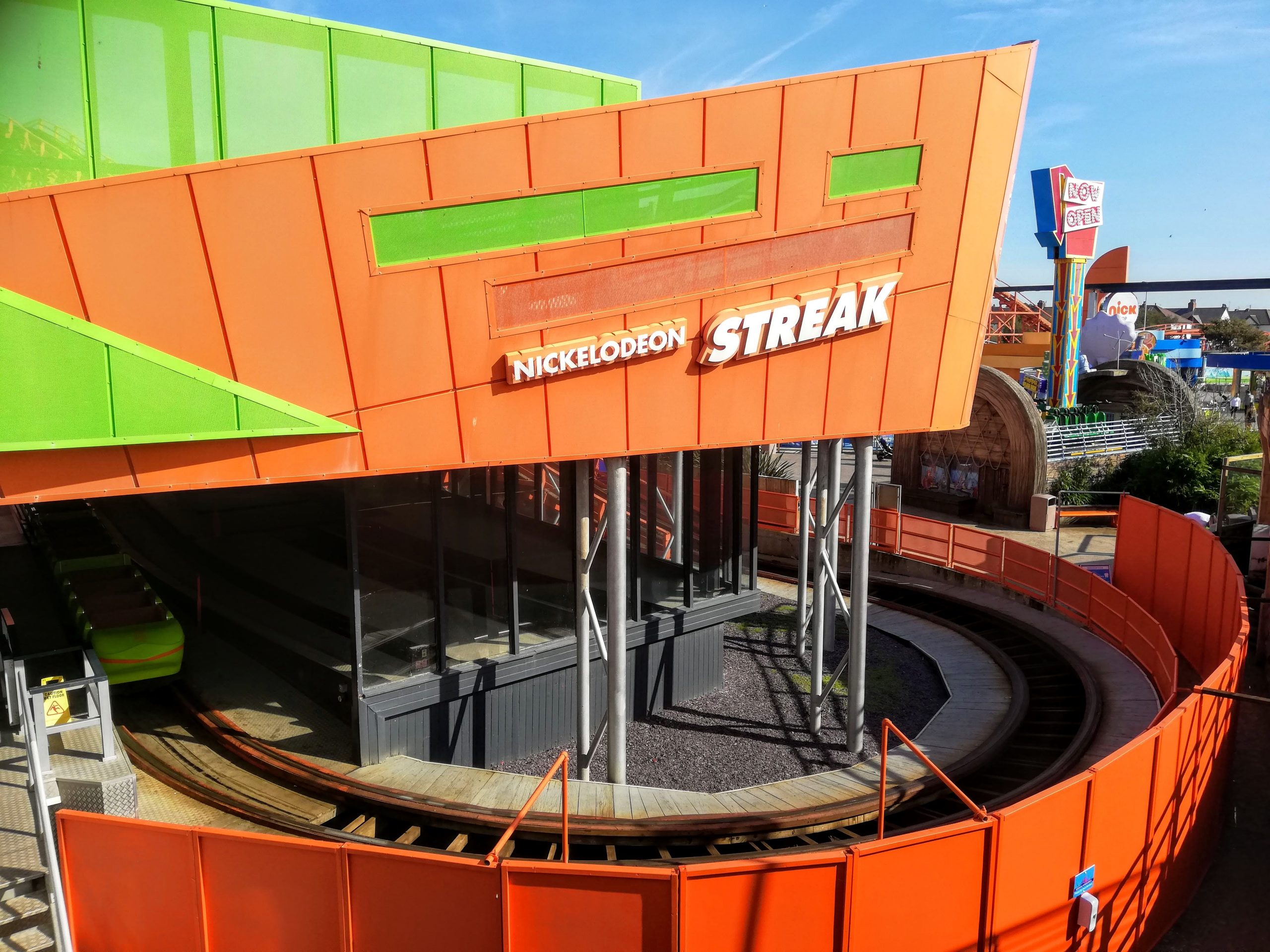 This wooden dueling coaster is probably my favorite ride at the park. It doesn’t reach the top spot purely on intensity but it deserves third place. Themed around the Grand National Horse race and built in 1935 it is one of three of the last Möbius Loop roller coasters left in the world. Starting in the station you begin to race the other train, I love the rivalry it creates and everyone on board boos and cheers at each other. The ride is long and features some pretty harsh airtime but you end up laughing the whole way around. It is another listed building at BPB so it will hopefully be at the park for a very long time. It holds the Guinness world record for most naked riders on a theme park ride and has held one marriage ceremony! 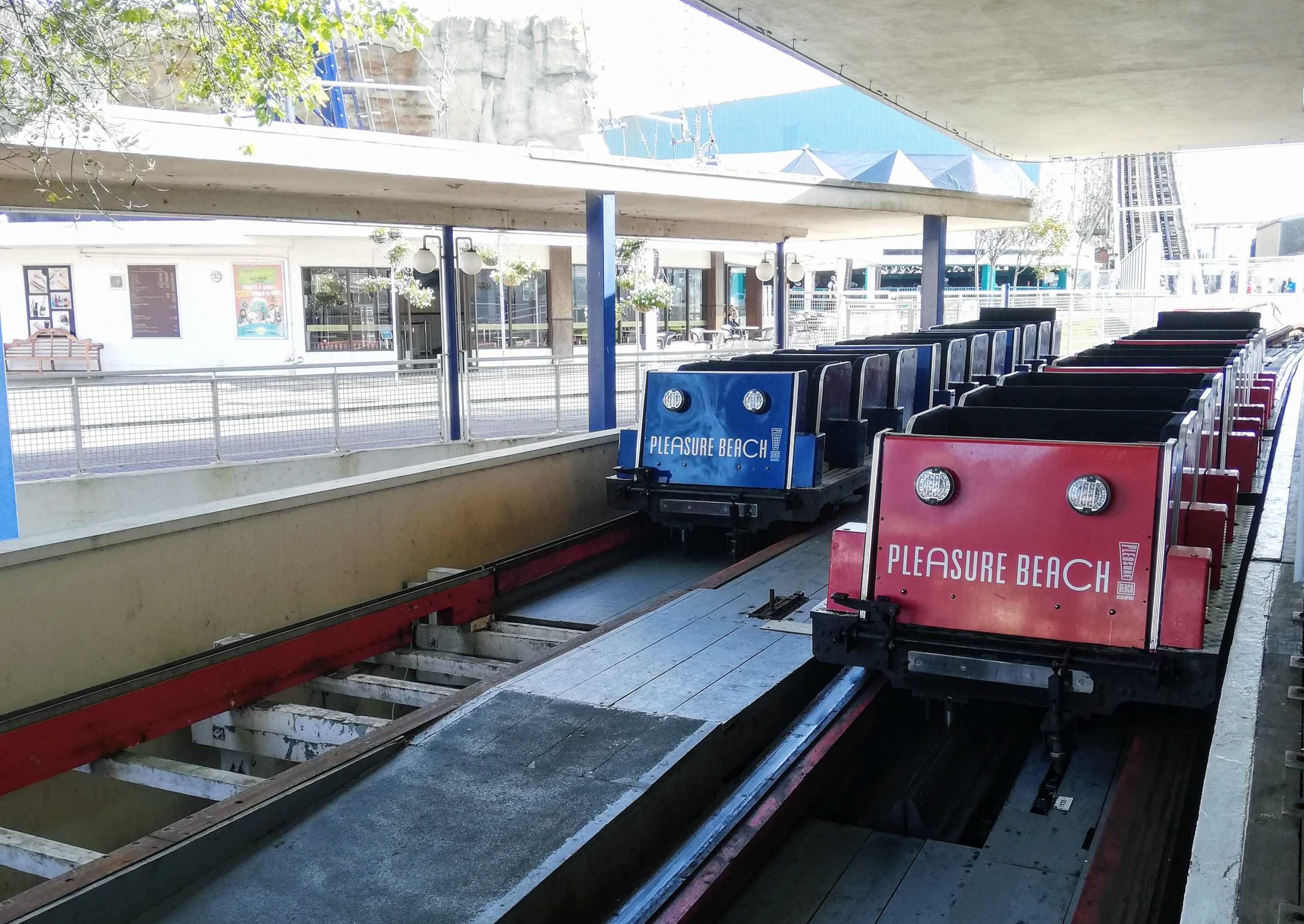 The top two spots were hard to decide (I have changed my mind about a million times) but Icon sits at number two. Opened in 2018 and built by Mack Rides, this double launch coaster is just a pleasure to ride. It is so smooth, comfortable and thrilling. After the first launch you are sent over the top hat, through the Big Dipper‘s lift hill and continue to loop and turn throughout Steeplechase. After the second launch you reach my favorite bit of the ride: the Junior Immelmann loop. At 85km/53mph this feels very fast and with the lap bars you get some serious weightlessness whilst riding. I love Icon and I dare to ride it every time I go! 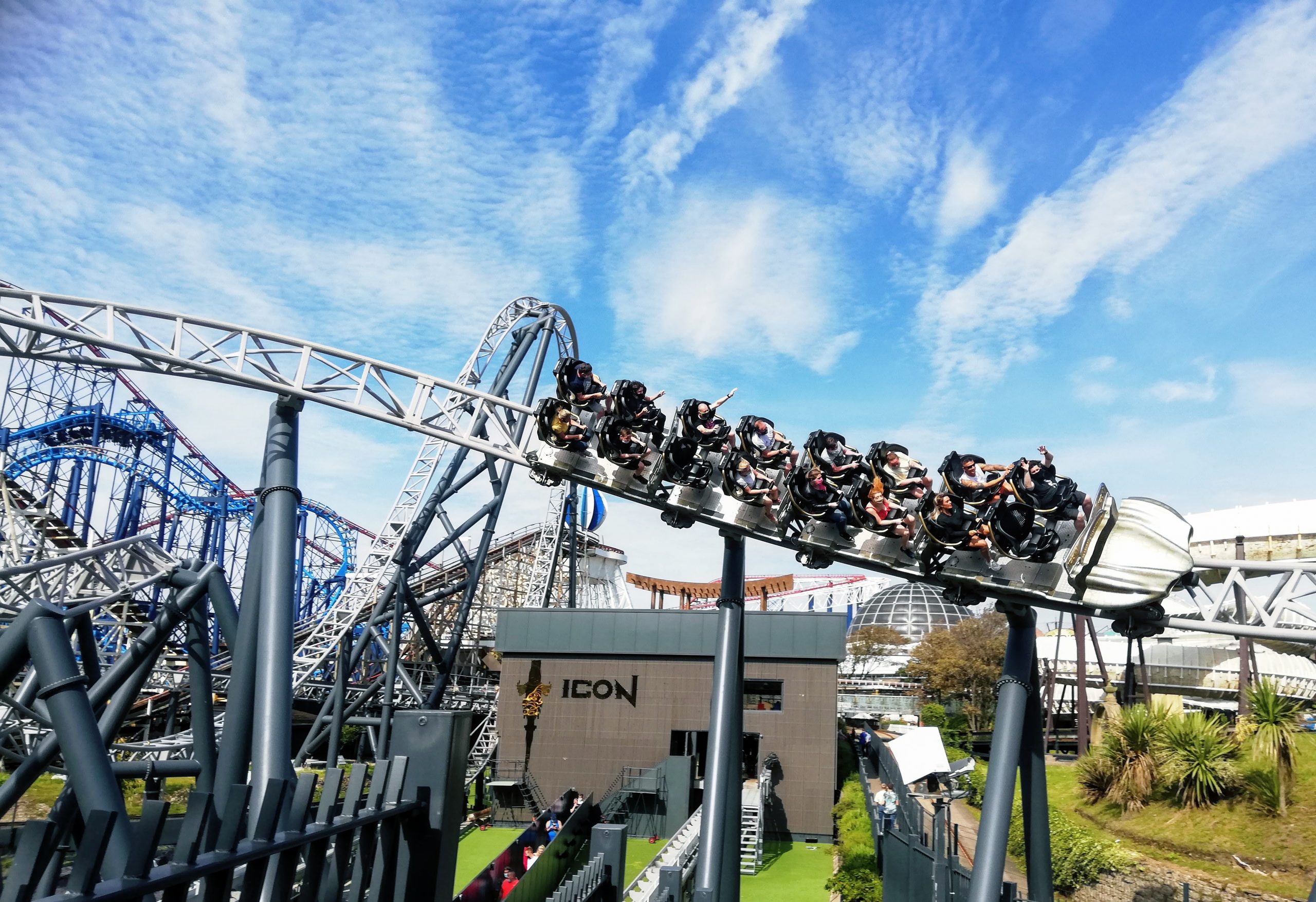 It shouldn’t be a surprise that this massive coaster placed as number one. Built in 1994 it was then the tallest and steepest rollercoaster in the world! Reaching speeds of up to 119km/74mph, climbing to a whopping 235ft/72m it is a scary but thrilling hyper coaster. Originally opened as the Pepsi Max and retained its theming but now operates as The Big One. The first drop is so steep and intense but sets you up screaming as you go flying round the track. Pulling up to 3.5g’s in some of its corners and drops, interacting with other rides and the potential for losing your head makes this number one on my list. My favorite features are the height markers on the lift hill and the first drop, it is just so steep and truly one of the best in the UK. 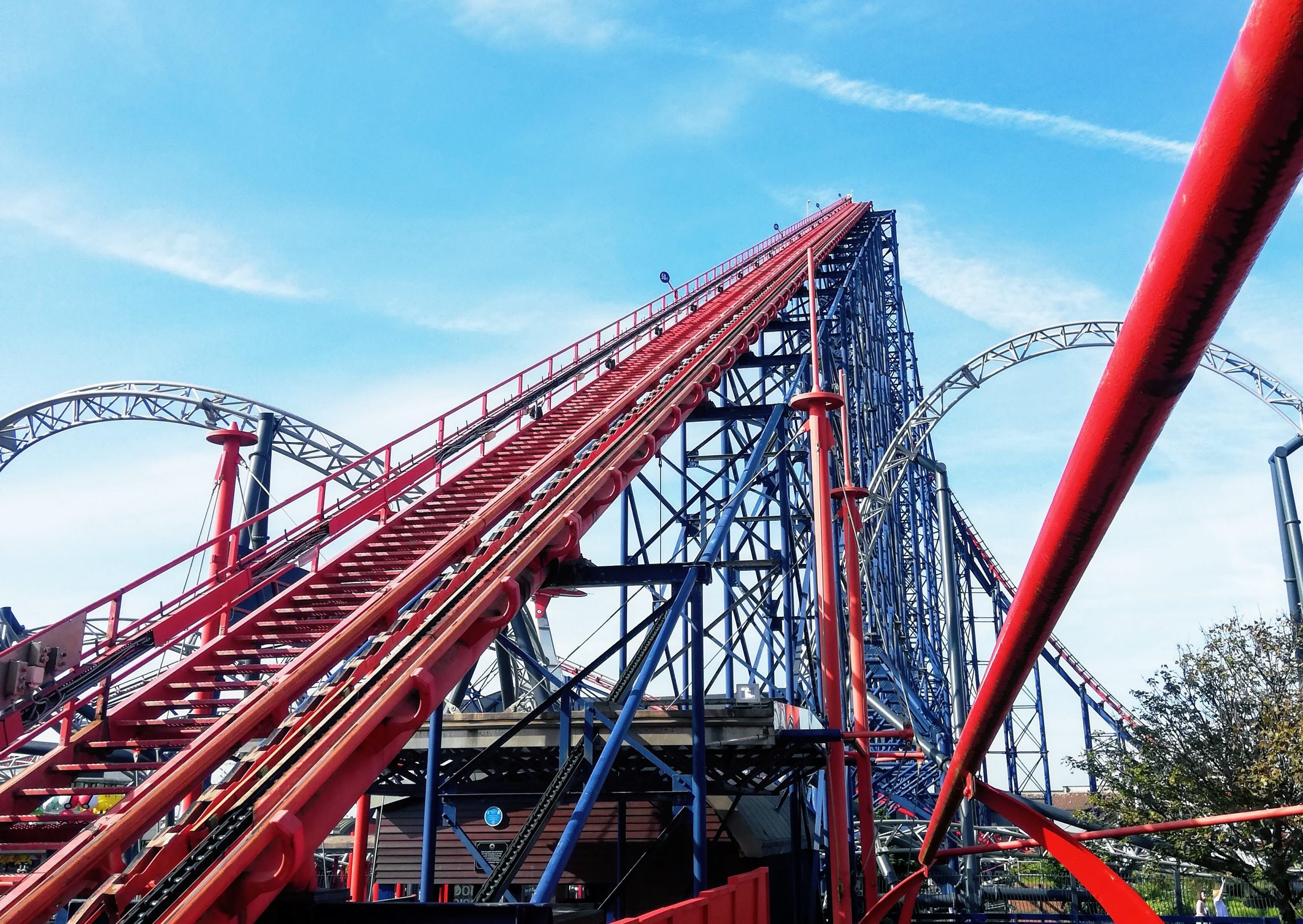 Disagree with me?  Let us know in the comments!