In the UK the Theme Park scene is pretty much over for this year but there are still a few places to get your rides in. There are not many of the Coaster Kings who have had the chance to visit Adventure Island and after my first visit I wanted to tell you all about it. I’m going to use the word cute a lot in this article because Adventure Island is a cute park!

Located in the south east of England, Southend on Sea is home to Adventure Island. Opened in 1976, the park now has over 40 rides and attractions. The park is split over two sections, divided by the train station for the world’s longest pier (another reason to visit!) The park itself has a wide variety of rides from thrill ride to children’s rides. The site also boasts the driest and warmest location in the UK which is great as it does rain a lot here! 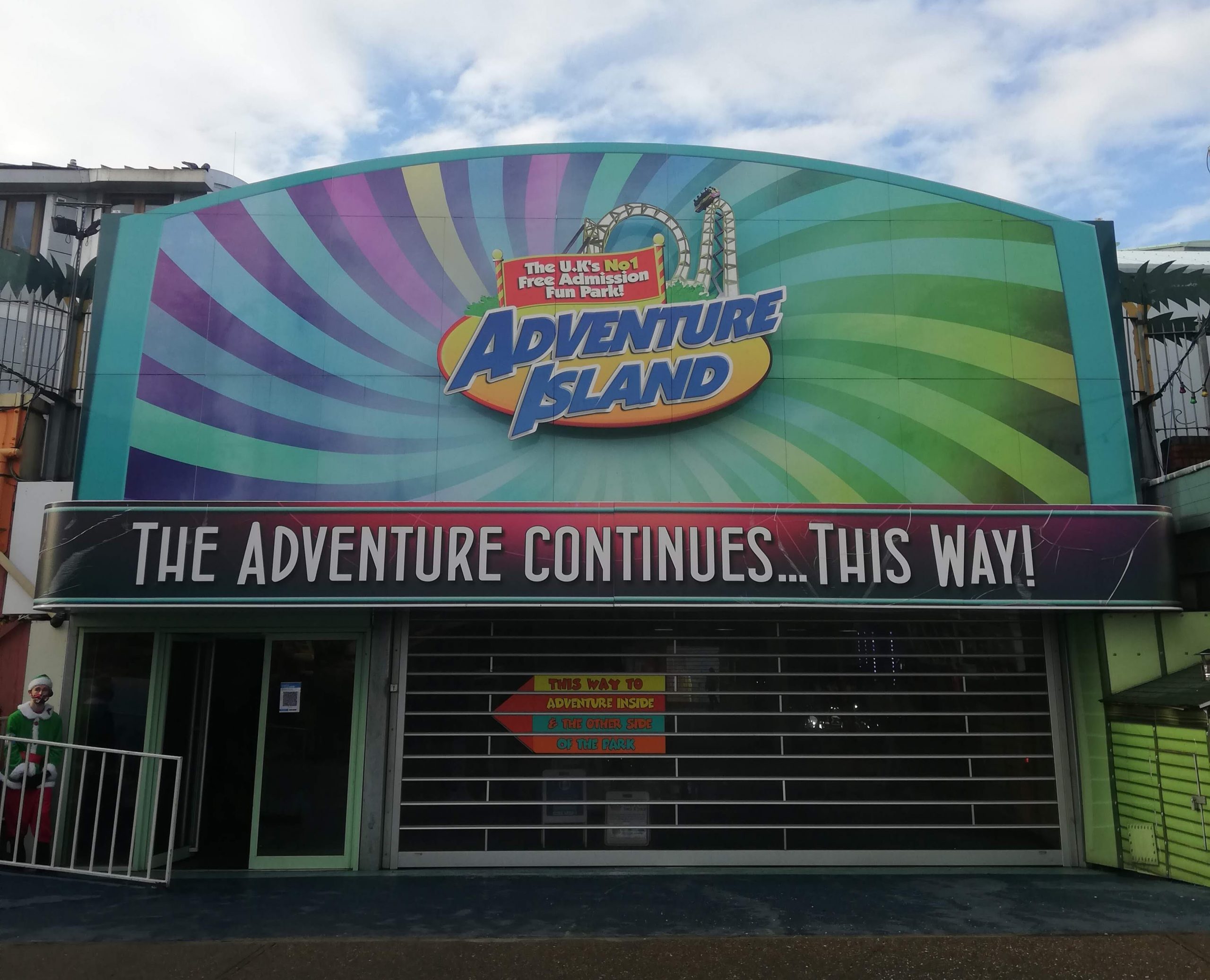 I had planned to visit next year as the park was due to remain closed until the 2021 season but with lockdown restrictions lifted the park has to able to reopen. For two weekends in December the park opened with a ‘breakout weekend’ meaning all wristbands are £10 each. With the price and a chance to get some more coaster creds we jumped in the car and head there on the first Sunday. 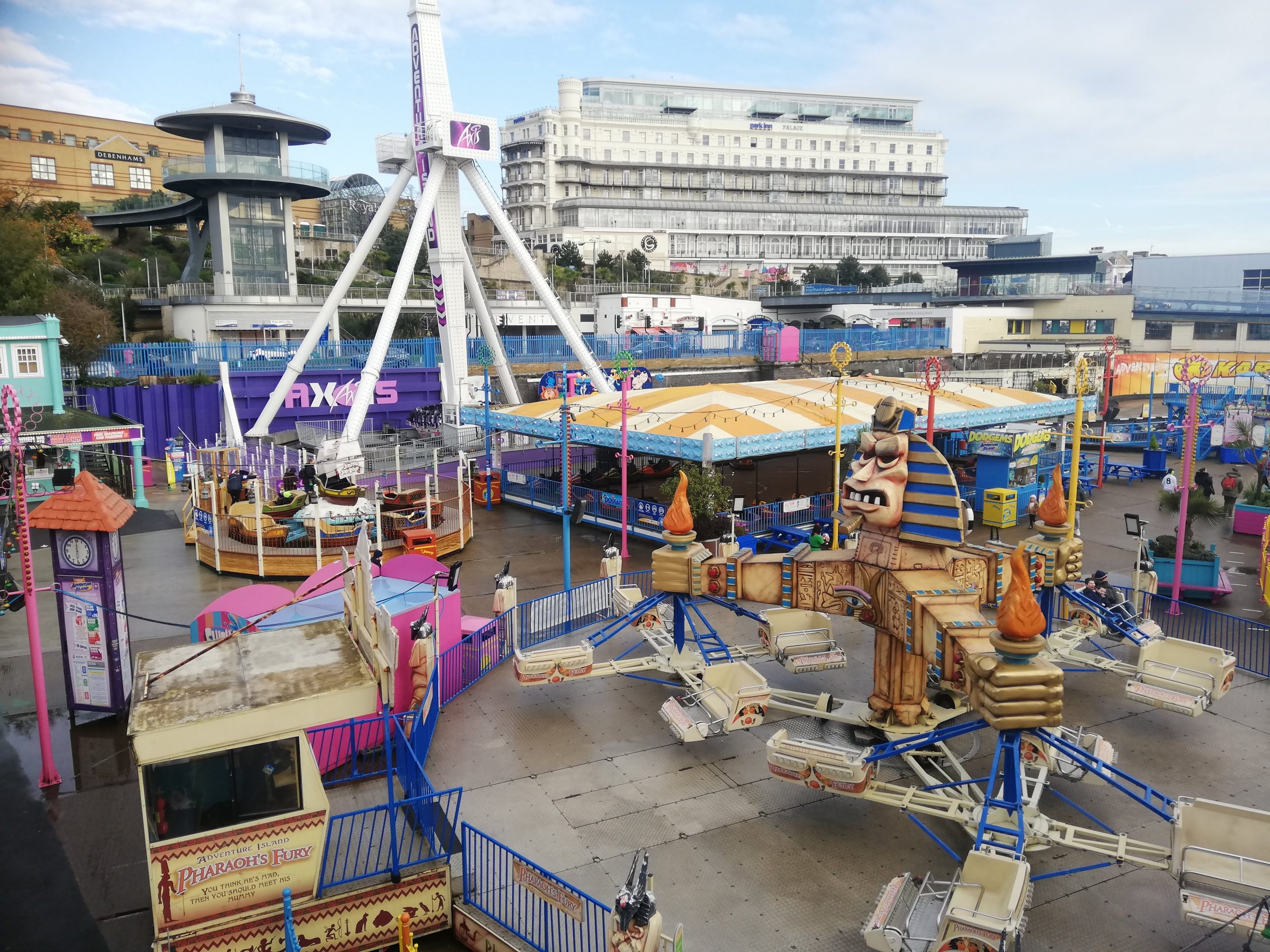 When we arrived at the park it was very quiet which we weren’t expecting but we were keen to get in and take a look around before the crowds arrived. I didn’t know what rides were in the park apart from the main attraction Rage so we walked around both sections before joining any queues. 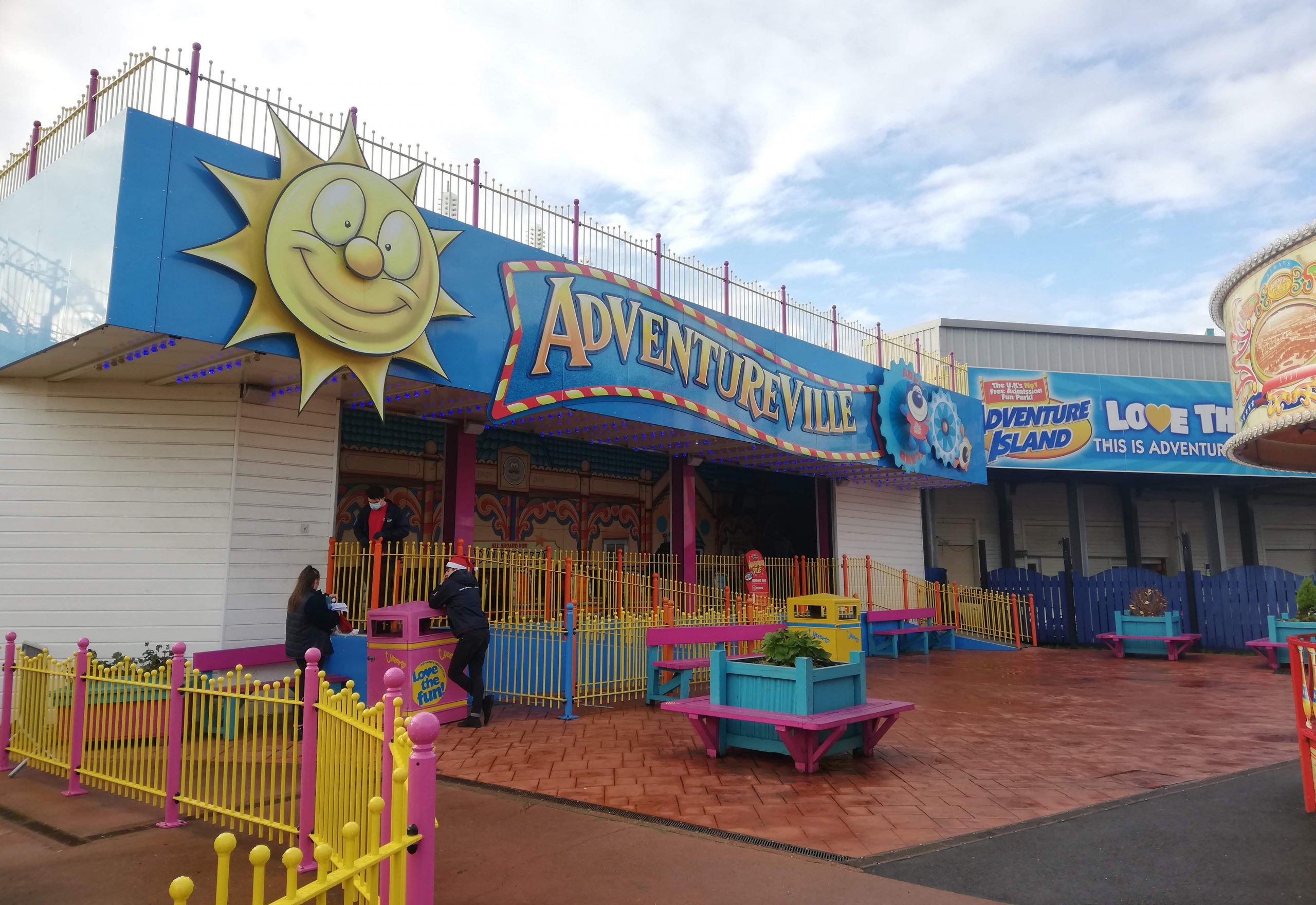 Our first ride of the day was Adventureville, a cute little dark ride recommended by James from the Coaster Kings. It was a great start to the day as George the ride operator was really fun and full of cheer, the ride takes you on an adventure with cool effects and a colourful set. Next to Adventureville is a beautiful Helter Skelter and the parks first ride The Crooked House. 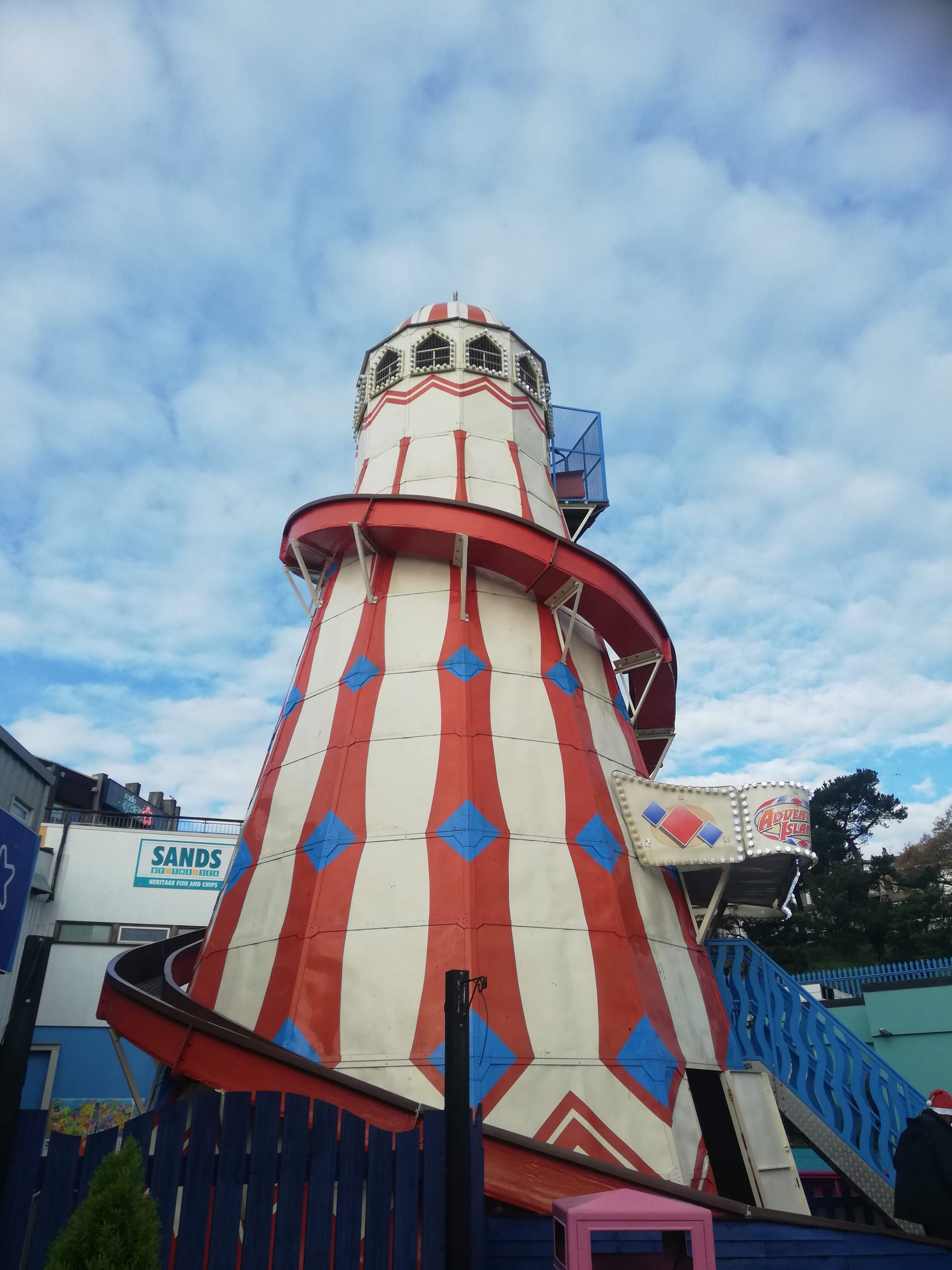 Next up we rode on the three coasters situated on this side of the park, Kiddi Coaster, Mighty Mini Mega and Barnstormer. All three were good fun and did all pack a little punch even though they were family coasters. 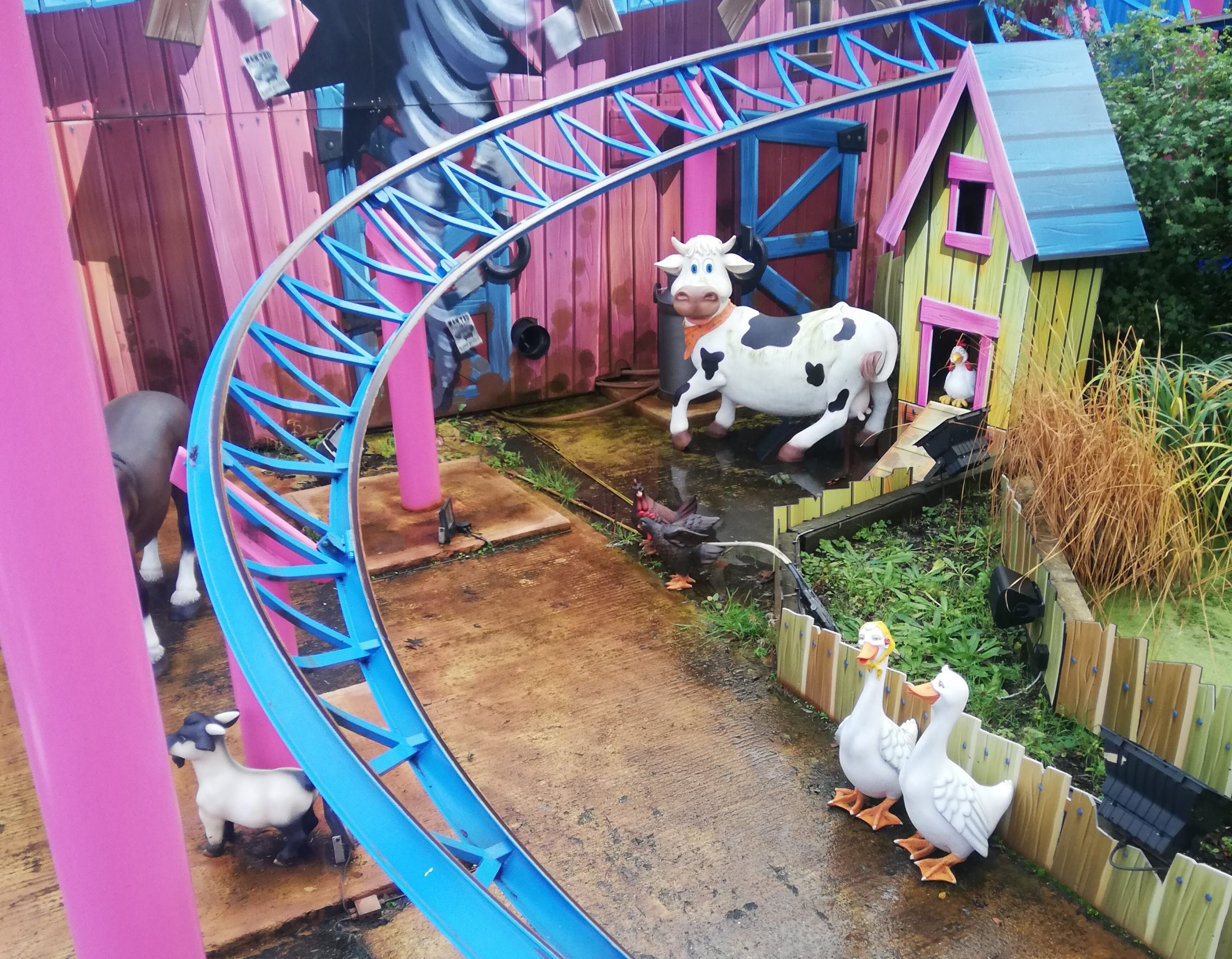 Out of the three I think I enjoyed Barnstormer the most, the farm theming and colourful animals made it another cute experience. Both the Kiddi coaster and Mighty Mega Mini were on top of buildings which gave you great views of the park and the surrounding seaside. 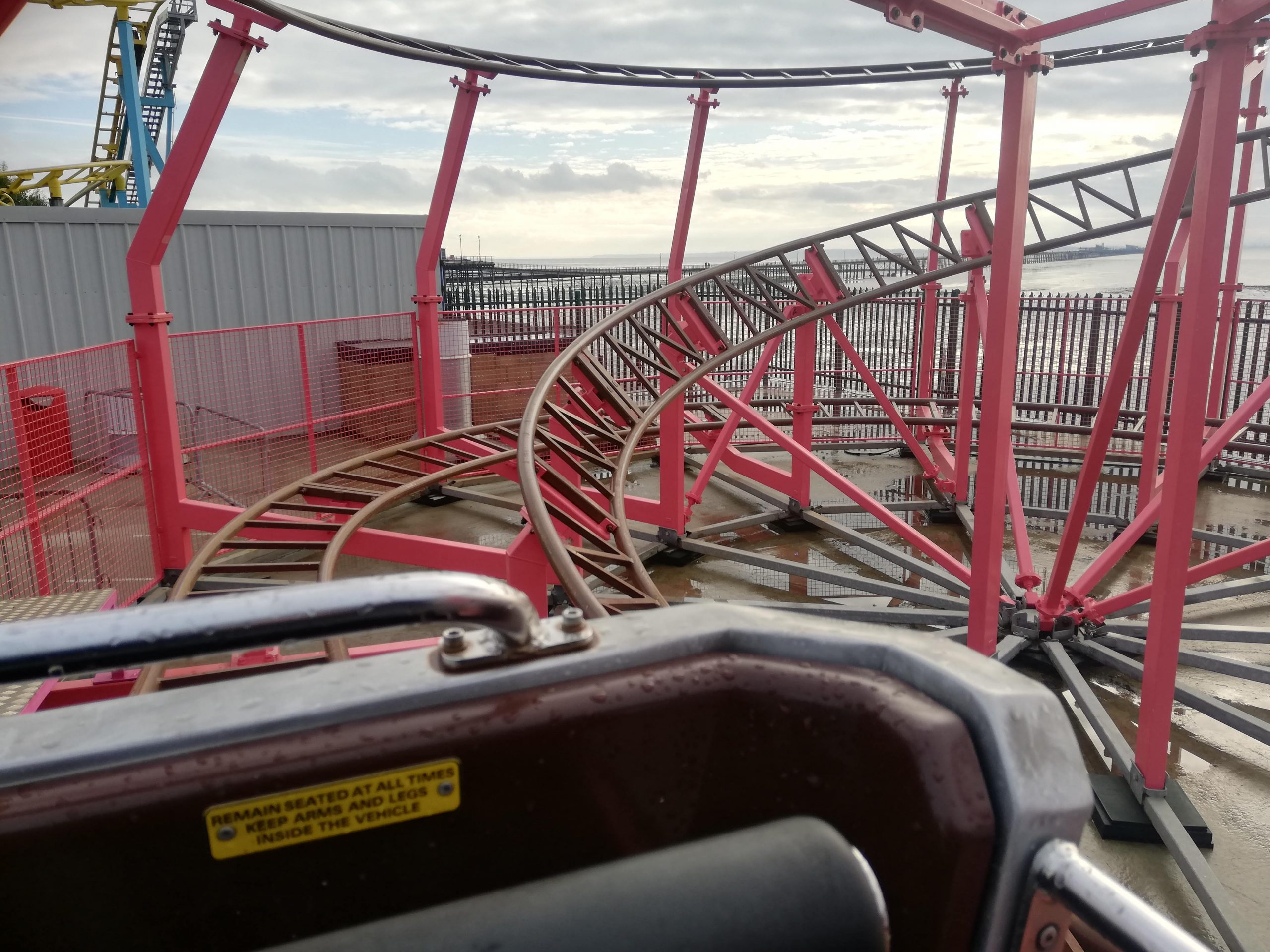 We decided to go and ride the other two rollercoasters at the park which were in the other section. In the middle is an arcade full of penny pushers and arcade games, they even had an old school selection of pinball machines, star wars games and a Han Solo in carbonite statue! 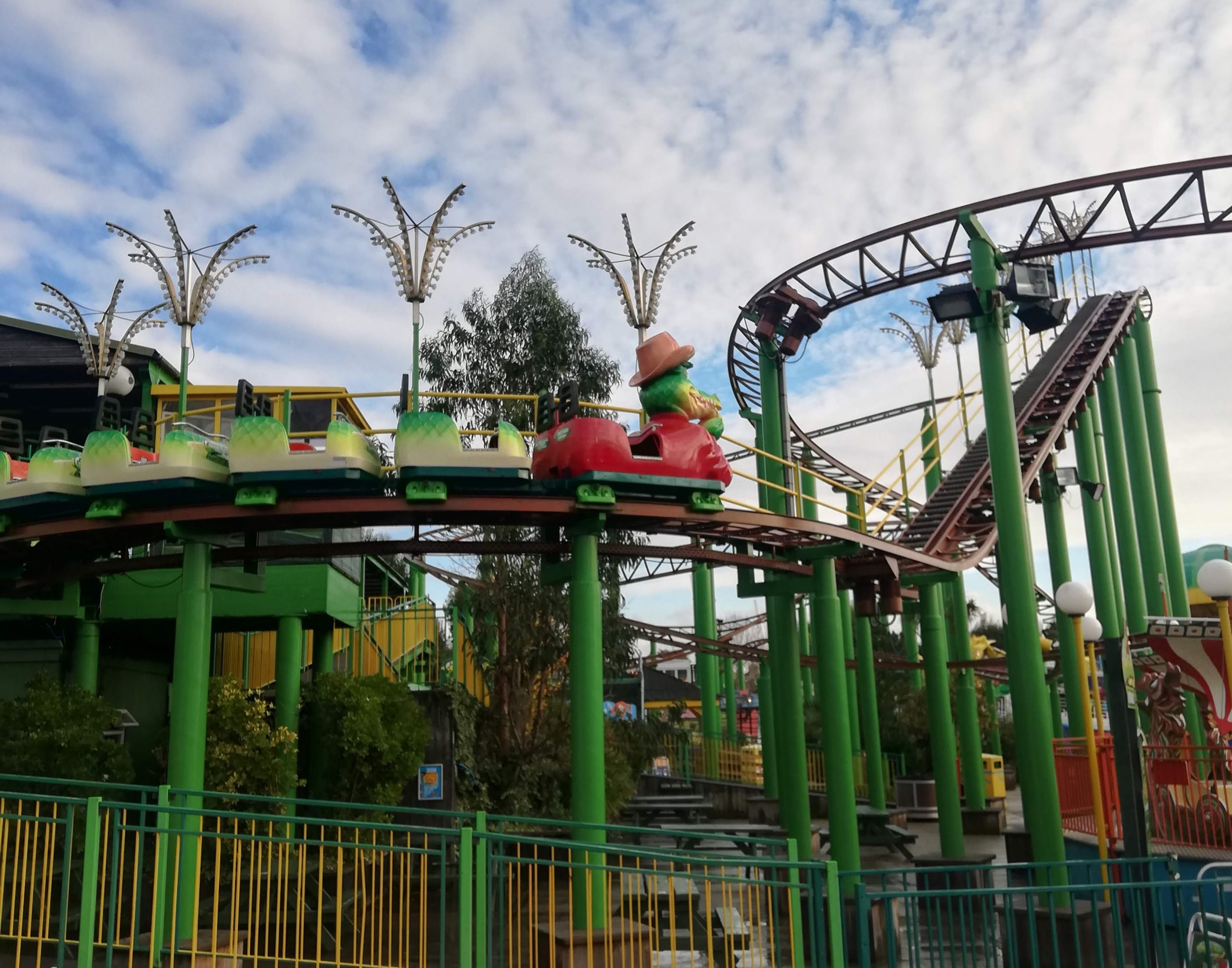 We started with the Green Scream, a family coaster themed around one of the parks mascots Snappy the crocodile. Our ride was made even more enjoyable by the kids in front screaming ‘that was so awesome’ when the ride came to an end. 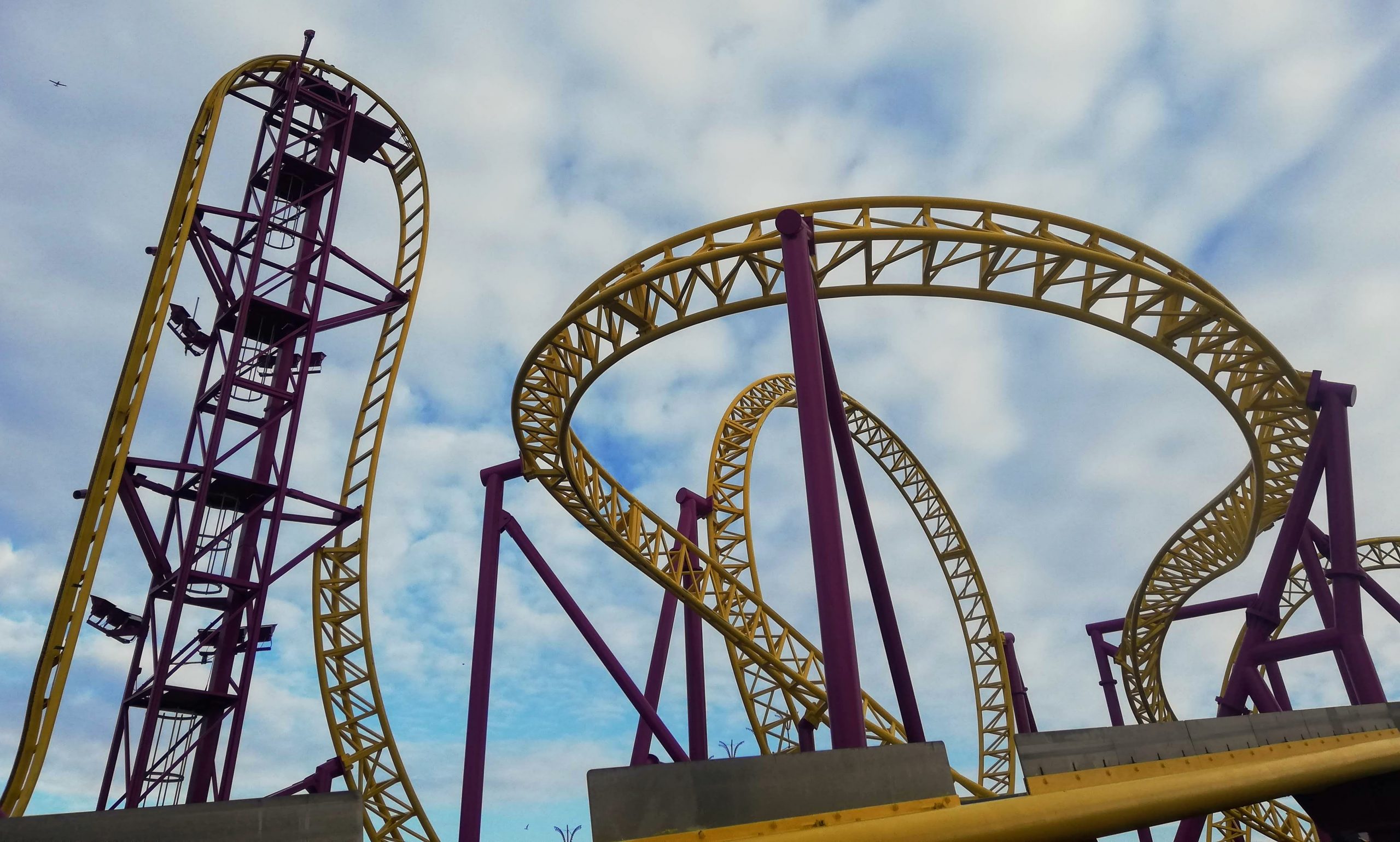 It was time to ride Rage (for me a great 90th credit!) Built in 2007 by Gerstlauer this colourful Eurofighter is very smooth and comfortable to ride. With Saw the ride as my only other Eurofighter cred its hard to give a good comparison and of course Saw the Ride with its theming is going to win my vote. 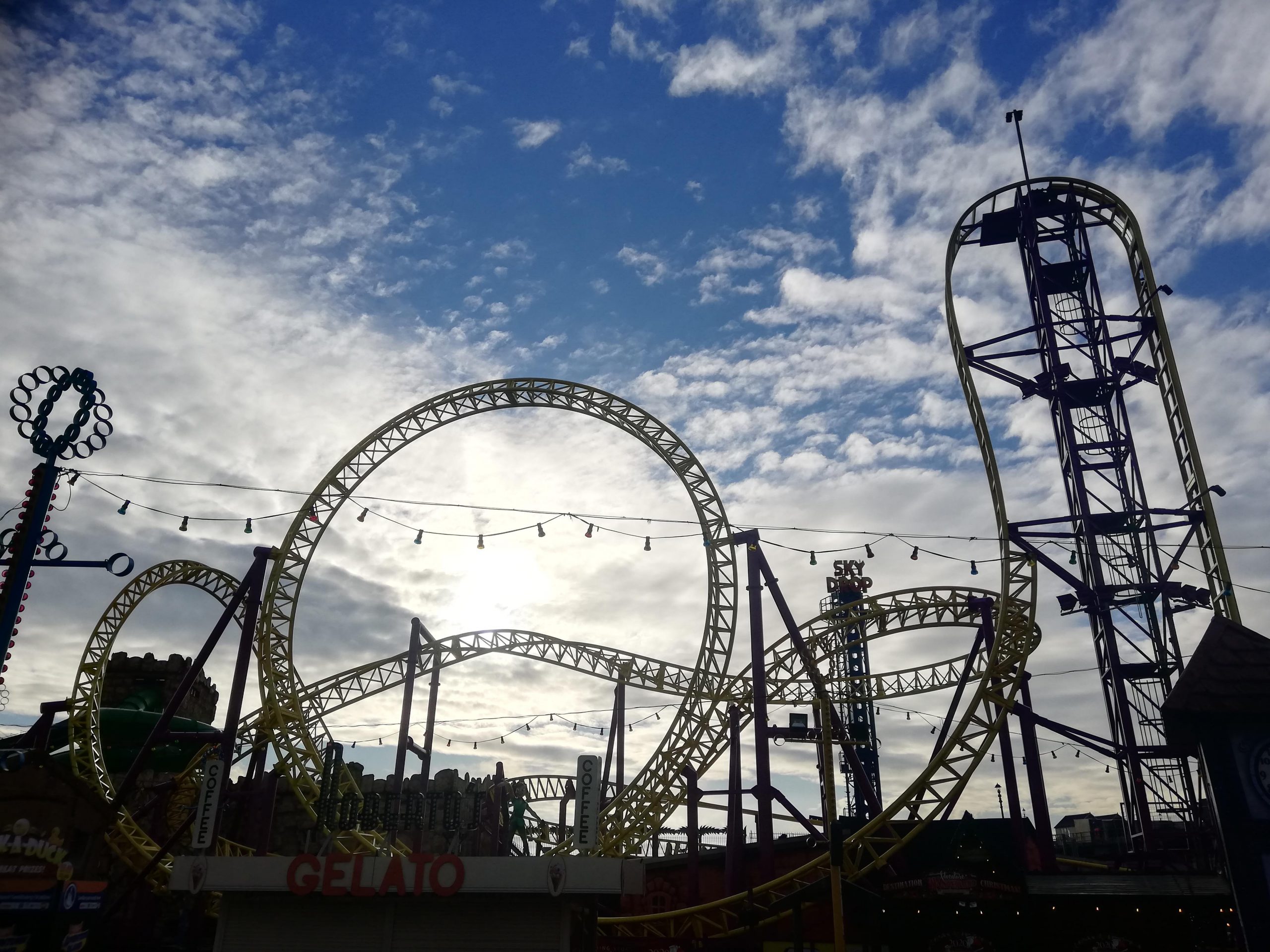 Controversially I would say that Rage is actually not that far behind. I really enjoyed Rage, the 97 degree drop and the hang time we got during the loop were our main highlights. It is also an incredibly photogenic coaster. 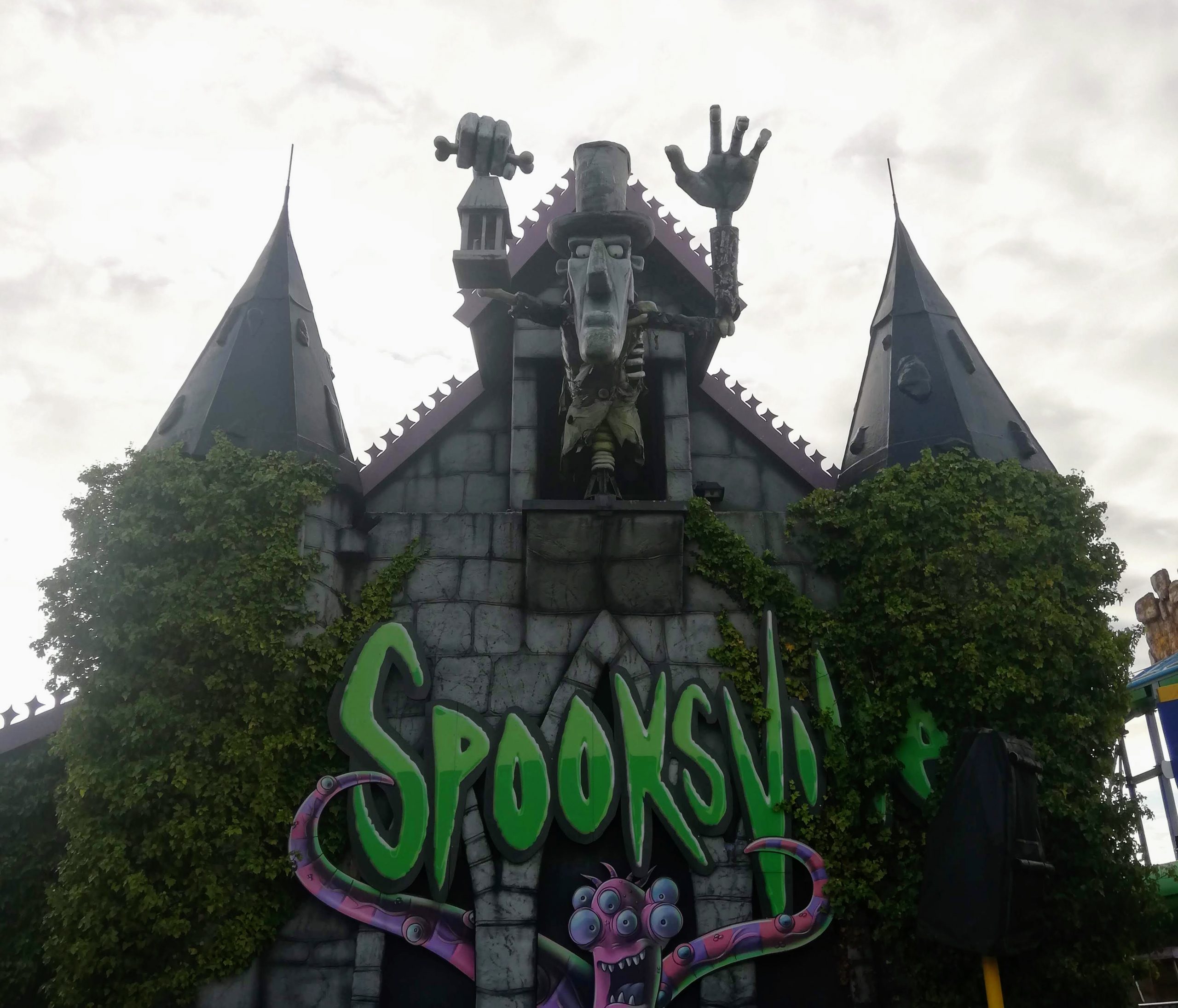 Next we went on a trip to Spooksville a Ghost Train/Dark Ride. Its hard to tell where the park were going with the ride as its not a traditional Ghost train but is more a ‘spooky journey’. It was overall enjoyable with some nice characters and scenes. 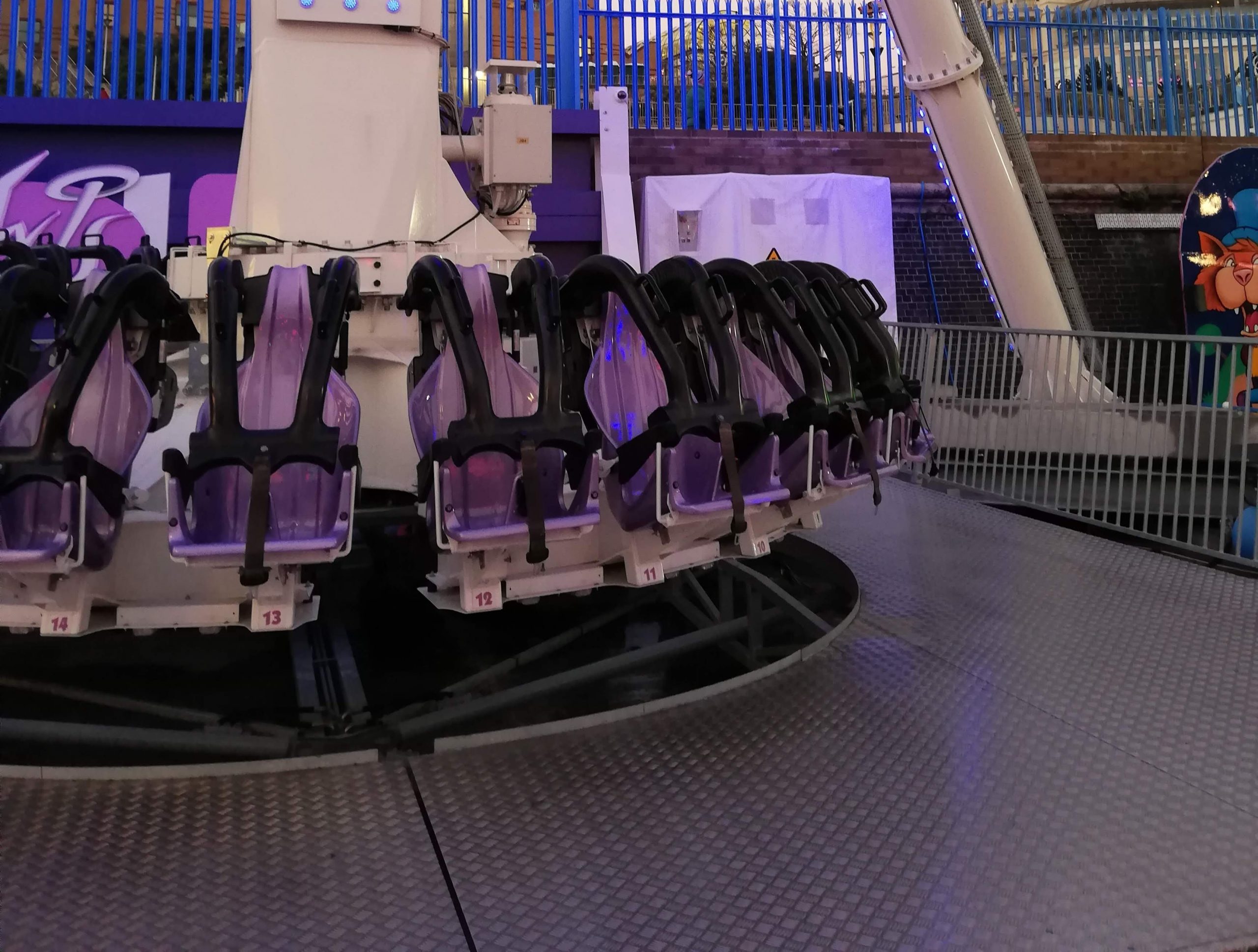 There are a lot of fairground types of rides at Adventure Island many of which we rode but the ones that stuck out for me were Axis and Time Traveller. 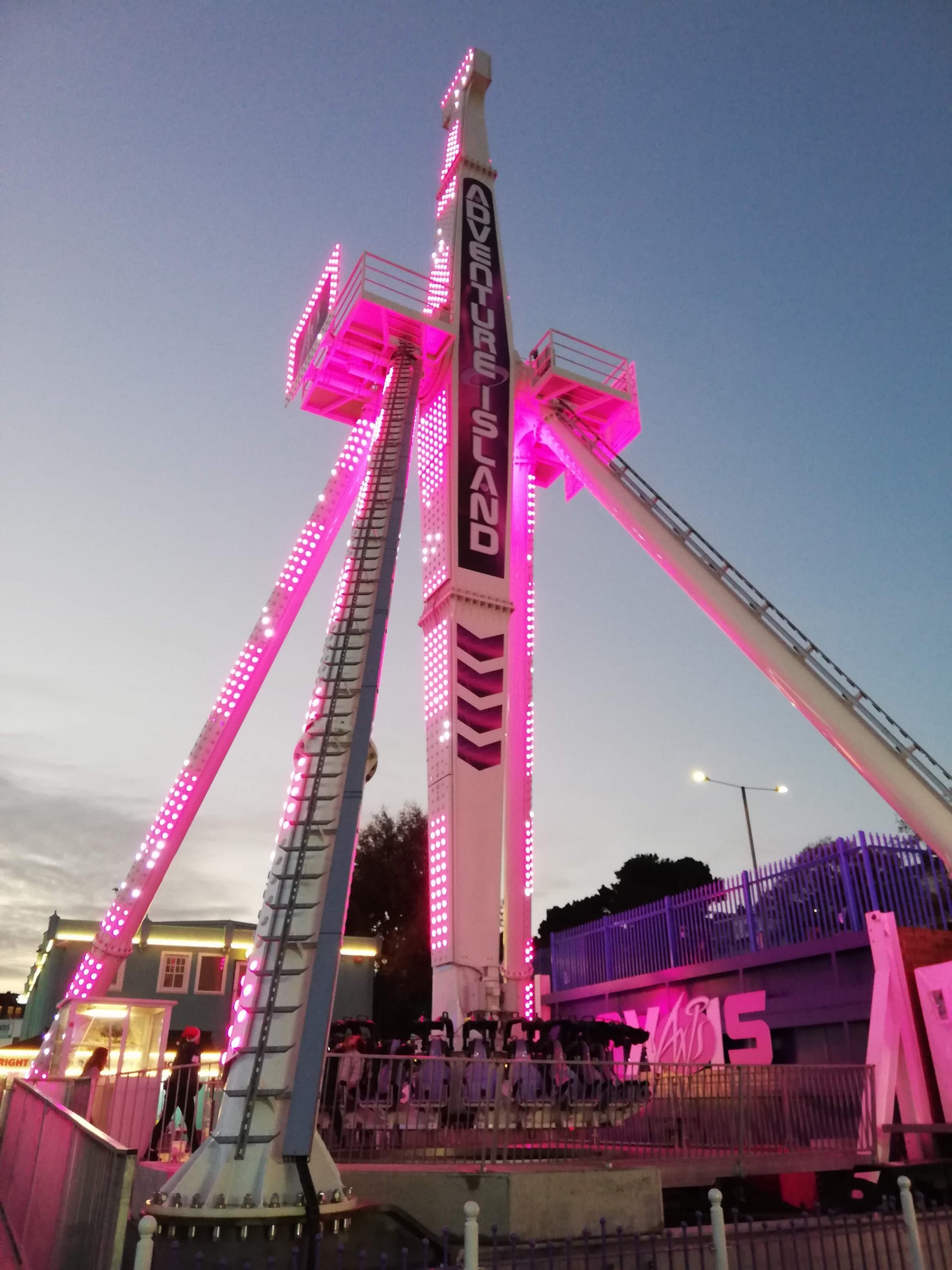 Axis is the parks Maxi Dance Party 360 which as the name suggest it swings 360 degrees! If I’m honest we rode this last as it was probably the thing I was least looking forward to. The swinging itself isn’t an issue but at the top you hang for what feels like forever, you do get an amazing view from the top though! I did really enjoy the ride and would ride it again if I was to revisit.

Time Traveller is built in house by Adventure Island and is a worlds only of its kind. I decided that I had to ride this for the experience even if I did witness many riders coming off looking pretty green and swaying from side to side. If you haven’t seen this ride before you should check out a full video on YouTube. It’s very unique in the way it runs, it spins you laid back whilst twisting and lifting you at a very high speeds. I honestly was a great experience and I’m glad I did it but it certainly one of most intense rides I’ve ever been on. 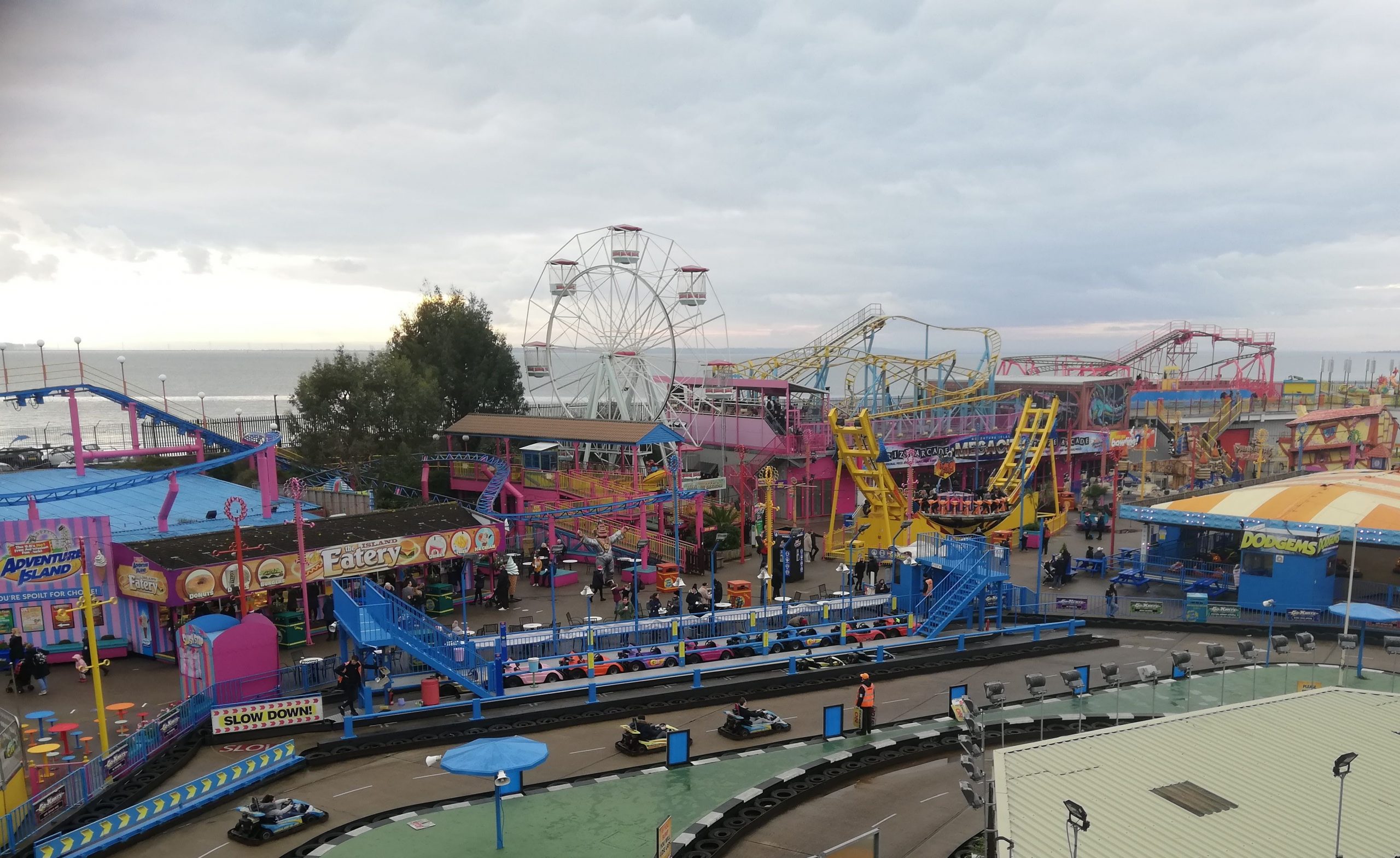 The park overall was great, a large variety of rides for everyone to enjoy and the crowds were really not too bad. As for Covid safety I really think the park had thought about the safety of guests and staff with plenty of hand gel stations, lots of signage and staff reminding guests about masks. In the evening the crowds did begin to grow and large groups entered the park which made the experience a little bit disappointing but the staff were doing everything they could do to manage this.

We stayed until the evening so we could experience Rage in the dark which was a cool experience and my first coaster in the dark. 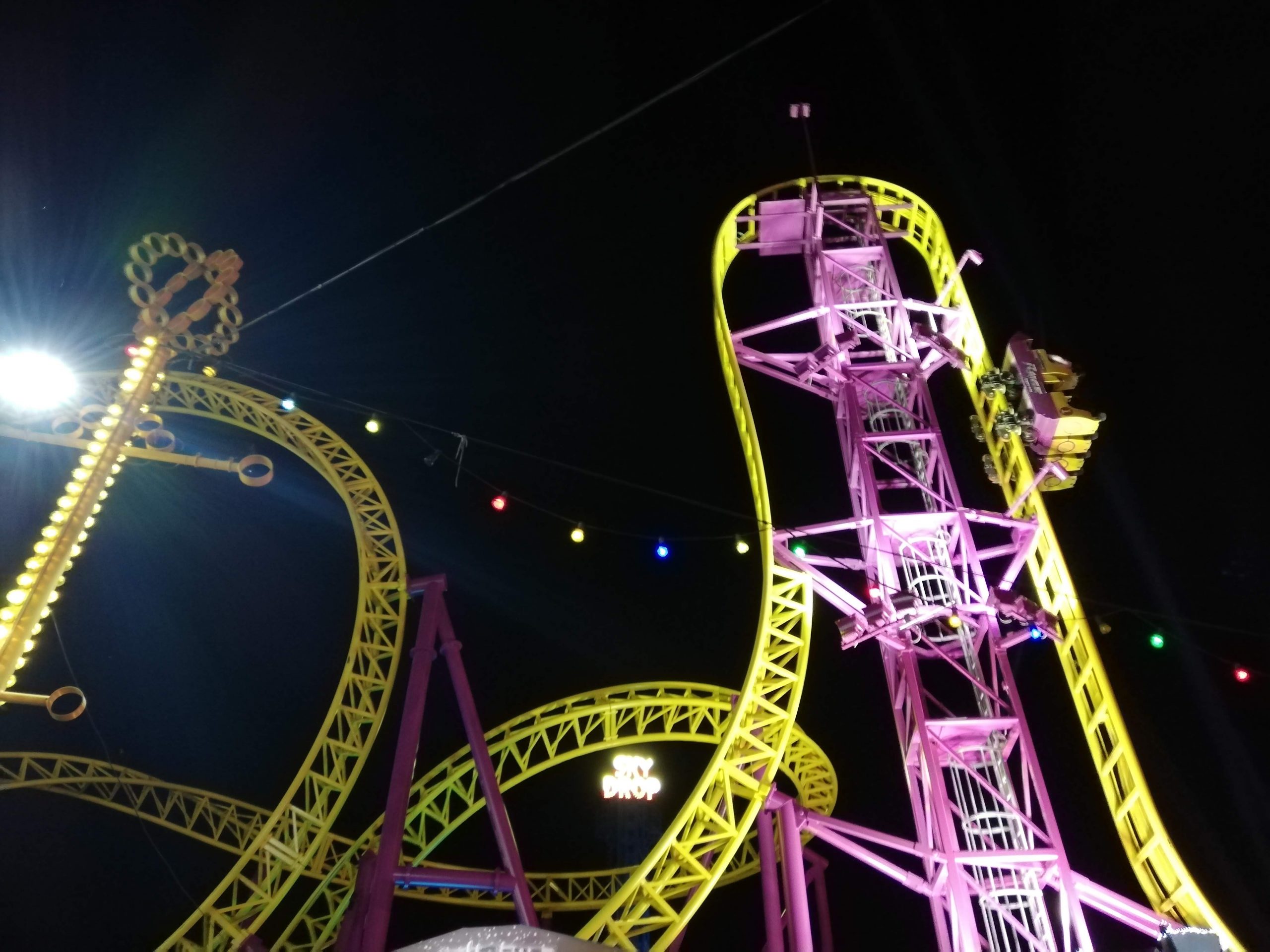 For the price we paid (£10) we had a fantastic day, even if you paid full price you would still have a great experience. In its location it is not far from central London so is easily accessible for anyone visiting.  Would I return? Yes I would, I think they would have to build something new to bring us back but it is a fun day out. It was amazing break from all the lockdown madness and a reminder to sometimes just forget the troubles and enjoy yourself.