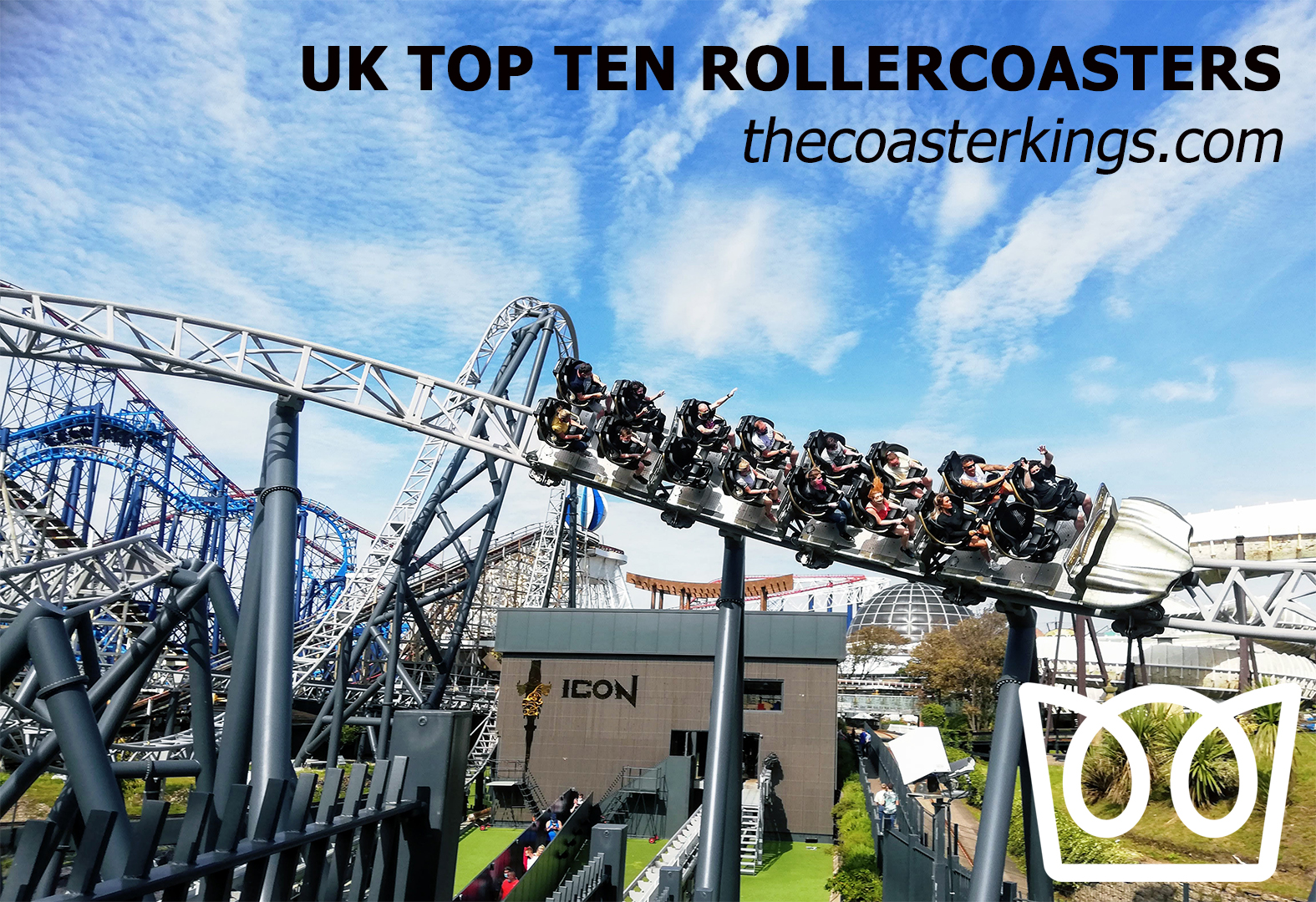 Here in the UK we are lucky to have a great selection of rollercoasters dotted all over the country. We wanted to get a list together of our favourites and also yours too. We asked you our readers to suggest your favourites and why and combined it with my personal favourites to make this article. A special thanks to Alex from the Coaster Kings for his help with this article.

Starting with our number 10 is Galactica! Now this ride might actually be one of my favourite rides in the UK but sadly it only hits the number ten slot. This is hugely to do with the fact that – well, let’s face it – there are better rides in the park! The ride itself was built in 2002 by B&M and was opened originally as Air.  In 2016 Alton Towers added Virtual Reality headsets to the entire ride, giving riders a completely new experience. Sadly this was reduced and then removed from the ride. This in my opinion made the ride so much more of an experience and it would certainly sit higher in the list if this had remained.

Sitting uncomfortably at #9 is The Grand National at Blackpool Pleasure beach. Although known to throw you around, it’s one of the best rides in the UK. With Pleasure Beach celebrating its 125th birthday this year, The Grand National is a must ride for enthusiasts. This “Mobius Loop” coaster is one of the only remaining in the world, the other is at Kennywood in Pennsylvania.  Themed after the Grand National race, riders experience twists, turns and hills similar to the famous racecourse.

Bringing us to Wales for spot #8 on our list, Oakwood’s Megafobia was an unlikely choice for an unlikely park that nevertheless landed a lasting impact on The U.K.’s coaster scene. Hot off the heels of the notably successful Antelope at Gulliver’s Warrington the year prior (the first new wood coaster for The U.K. in 35 years), Oakwood upped the ante with an unexpectedly intense Custom Coasters International creation whose thrill-factor for a wood coaster remains unrivalled in the region. Megafobia celebrates its 25th Anniversary in 2021.

With over 2.25 kilometres of scenic and sensational serendipity, we of course had to make room on our countdown for Lightwater Valley’s Ultimate. Opening in 1991 after being independently developed and designed exclusively for Lightwater Valley’s expansive property, to call the seven-and-a-half-minute terrain mine train “unique” is an understatement. Record-breaking statistics aside, Ultimate offers a satisfying and impressive ride that leads with a gentle stretch into the wilderness and finishes with a ferocious, forested finale.

6 – The Big One – Blackpool Pleasure Beach

Back to Blackpool for our #6, The Big One. This hypercoaster was once the tallest and steepest in the world. Standing tall, its structure can be seen as for miles around Blackpool and it graces the night sky with its presence. Opened in 1994 as Pepsi Max Big One, its reputation grew and was known by everyone as a staple when visiting Blackpool. Like most of the rides at Blackpool Pleasure Beach, The Big One interacts with the other rides around it, giving the rider some serious near miss elements. This red and blue beast reaches speeds of up to 74mph/119km and is not for the faint hearted.

Being the little sister to another ride must be quite hard; here at #5 is Nemesis Inferno at Thorpe Park. Strictly speaking Inferno isn’t a little sister of Nemesis but both built by B&M they are often compared together. Taking you into the depths of a erupting volcano, through its loops and corkscrews you really feel its speed and force. This coaster deserves a spot in the top 5 for its design and the sheer G-force you get to experience.

Staying at Thorpe Park we have the mighty Swarm. After some extensive marketing throughout the park and the UK, riders were invited to take flight on a mechanical machine through this apocalyptic battle. At the time The Swarm was the 2nd wing coaster to open in the world, lucky for us in the UK. The theming for this ride is what really gives it a spot so high in the top 10. Flying over the destroyed church, closely missing the wings of a crashed helicopter and a near miss through a huge billboard make this ride a thrilling treat.

Speeding back to Blackpool to take a ride on our #3, it’s Icon. This multi-launch coaster was built in 2018 by Mack Coasters and was the first multi launch in the UK and the first brand new coaster in the park for 24 years. Taking a ride on Icon is arguably one of the best experiences In the UK. The weightlessness you experience going over the top hat, shooting under The Big One, and reaching speeds of up to 53mph/85km are just some of its highlights. Not only is this coaster the most comfortable in the park, it’s also voted by our readers (and is also in my opinion) the best ride at Blackpool Pleasure Beach.

Hitting our #2 spot is the world’s first and only 14 inversion coaster, The Smiler at Alton Towers. This Gerstlauer Infinity Coaster was also the first of its kind to be built in the world. Attracting huge crowds and huge queues from day one, this ride is not to be missed. Known for being the most thrilling theme park in the UK, Alton Towers boasts the most intense rides and this certainly is one of them. Even winding through the queue line can be disorientating and confusing whilst you make you way to the station. The ride features a huge 14 inversions designed to bend reality and give the riders a truly unique experience. Its fast paced and wacky theming forces riders to smile – always.

Standing proudly in our #1 is the obvious choice, Nemesis at Alton Towers. This truly classic UK coaster has a huge fan based from all over the world. Designed by B&M, Nemesis is considered one of the most intense and best in the world. The theming leads this coaster into the top spot with its interaction with the landscape around it and its beastly appearance. The ride is as we mentioned intense and thrilling and sits perfectly at Alton Towers. Opened in 1994 and taking riders through 4 inversions at speeds of up to 50mph/81km this ride deserves our #1 spot!

While this enigmatic entertainer technically claims Germany as its one true home, we’d be remiss not to make note of Winter Wonderland’s star attraction, Munich Looping. Otherwise known as Olympia Looping, this Bavarian rockstar is always on tour, drawing in nightly fans by the thousands, and its Christmastime internships at London’s Hyde Park are no exception. With one of the world’s most intense layouts, most exuberant paint jobs, and most flamboyant light schemes, who could resist the siren song of this quintuple looper?

So there we have it, our UK top ten. Did you agree with our top ten? Think something else deserves a spot? Let us know in the comments below!

Want to join in with the discussions, join our Discord and chat with us and other enthusiasts too.