It’s been a few weeks since we launched a new TRON Lightcycle / Run update on the site. With this week’s cool temperatures, we figured we’d spend a day at Walt Disney World’s Magic Kingdom and share a TRON update with you.

– In the past, many of our images have been posted, featured, and shared on forums, social media platforms, and websites around the web. We work hard to provide the coverage that we do, and we encourage our audience to share our content and use our images, BUT ONLY IF proper credit is given to thecoasterkings.com. Thank you! –

Crowds seem to be ever increasing at the Magic Kingdom as temperatures drop, urges for travel increase, and holiday cheer is in the air. We took a whole bunch of pictures today that you’ll see on our social media in the next few weeks, but this update we’ll focus on the new addition to Tomorrowland: TRON Lightcycle / Run. 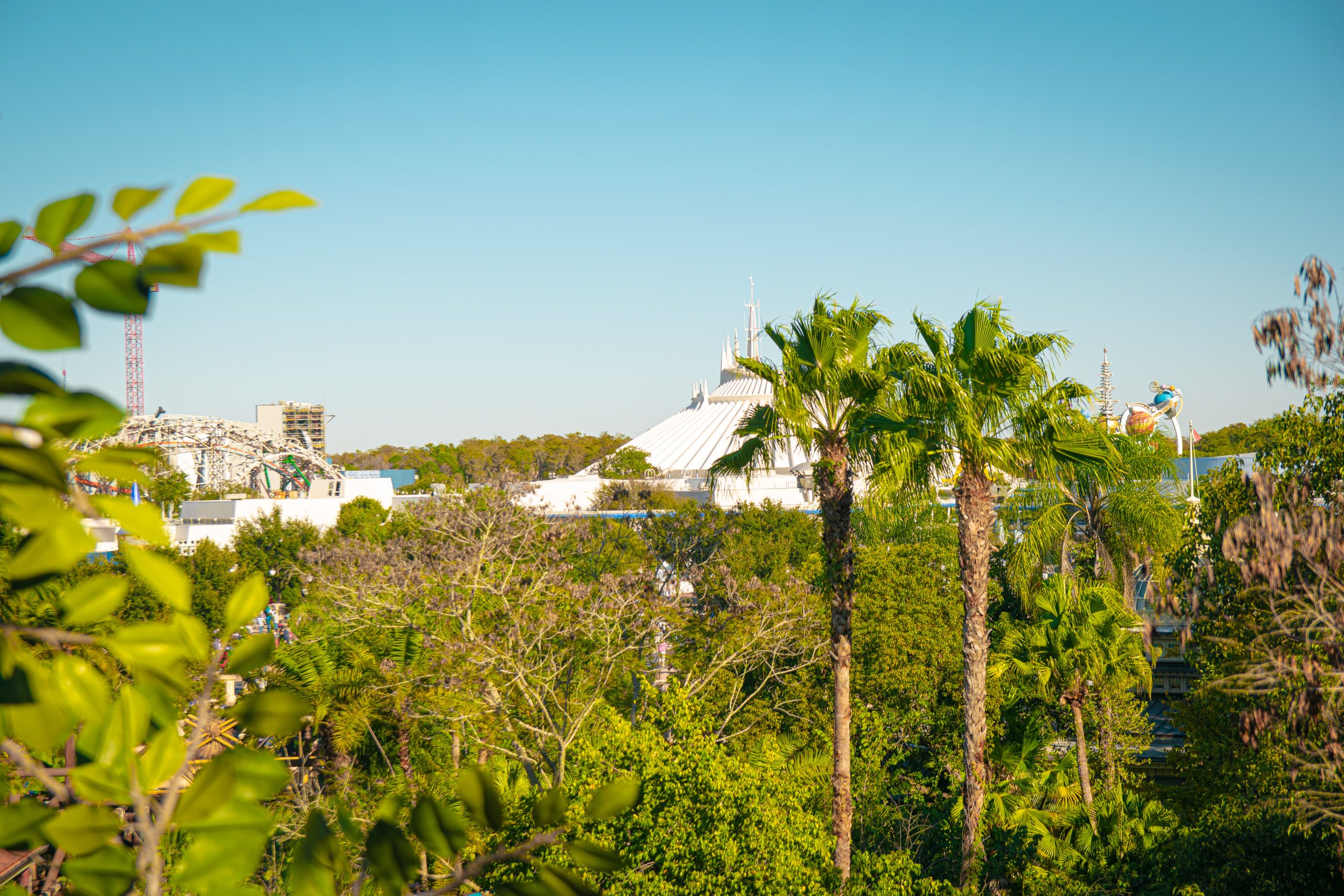 The ride’s show building is slowly disappearing behind the ever-growing canopy superstructure. It’s fun to see the difference a few weeks between photo reports can make. 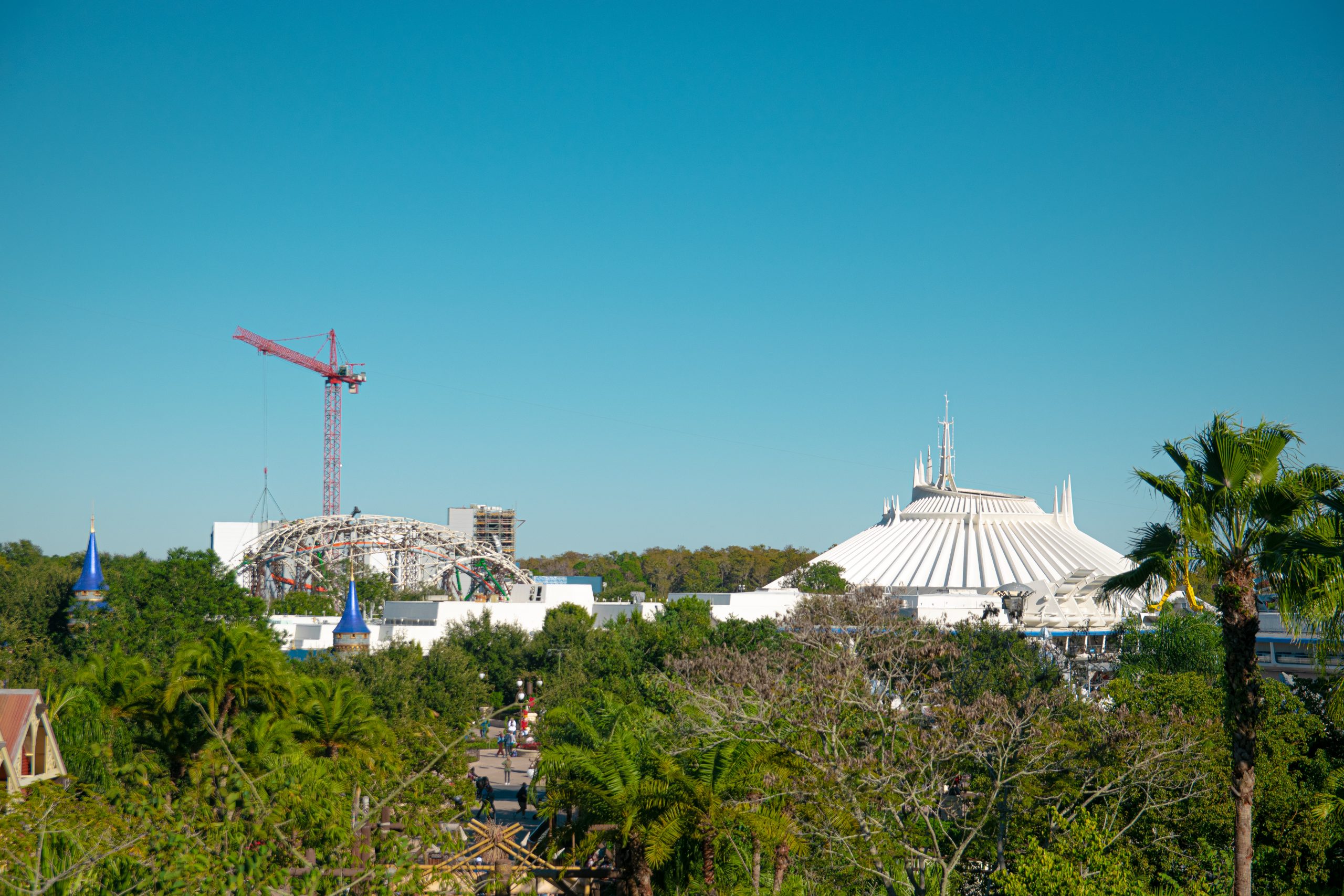 The widest part of the canopy is almost complete, once filled in it will hide the ride’s show building from most angles throughout the park. 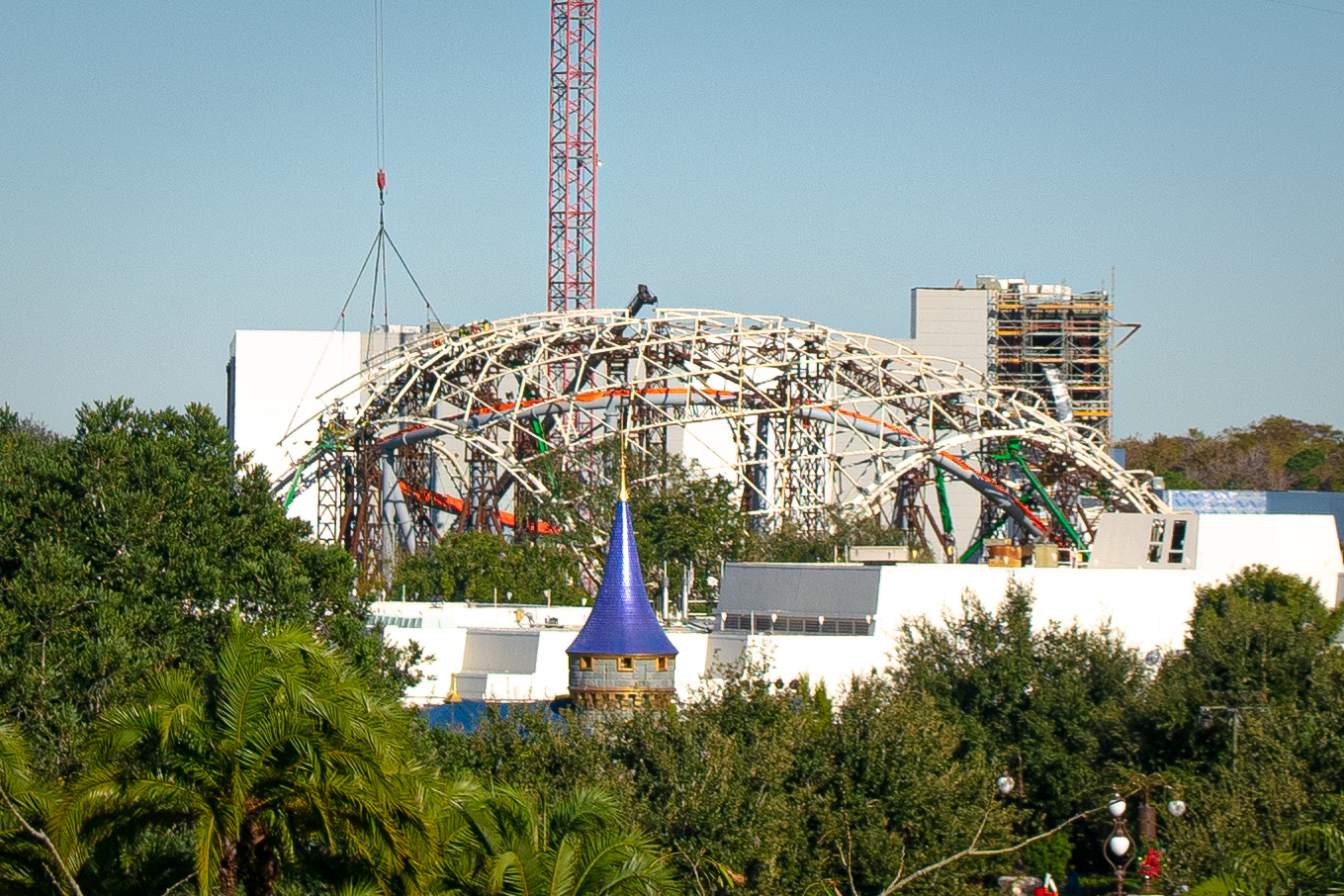 Previously, lots of additional canopy pieces were stored and being constructed off to the side, now only a few pieces remain. At the ride’s entrance (2nd level), a piece is stored as well: 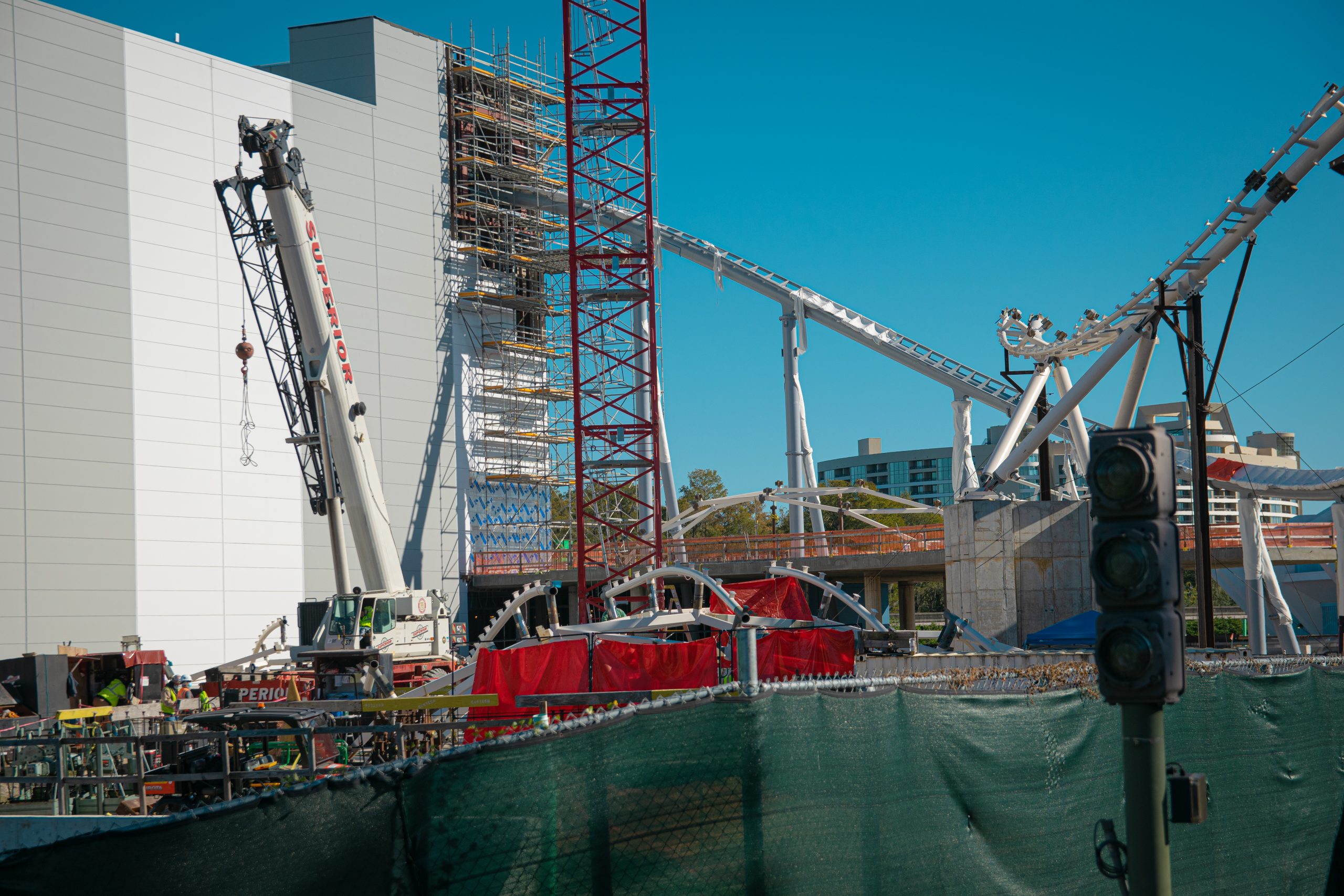 Perhaps it was hard to see in the past because of all the equipment in the way, but we noticed a large circular concrete pad next to the ride’s turn around (Fantasyland side). In Shanghai, the Chevrolet TRON Realm interactive experience is located in this spot. Something I don’t expect to see here, but it does make me curious to see if the pad has any meaning: 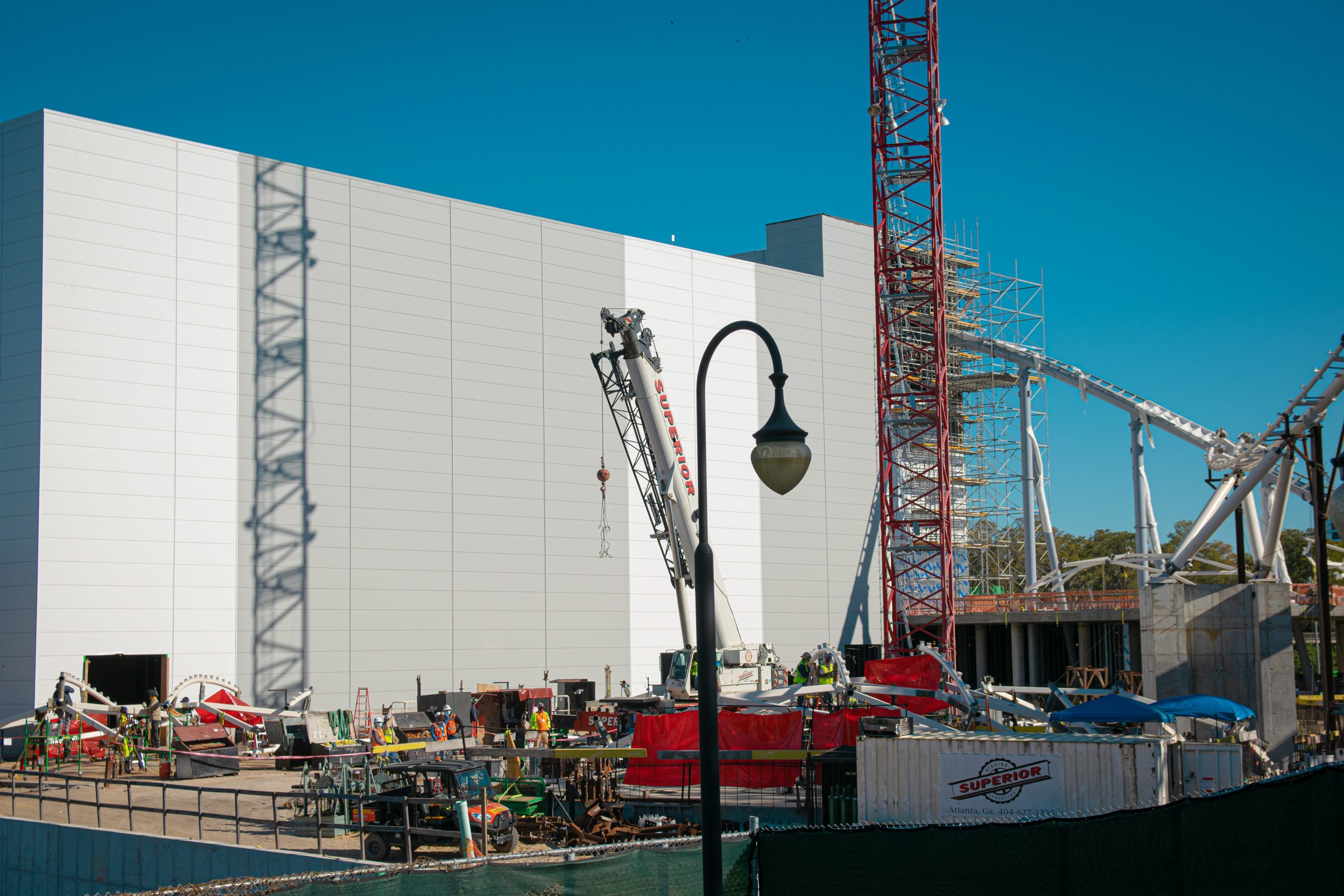 With more and more equipment getting removed as canopy construction rapidly progresses, the ride’s launch track is more exposed than ever. The part of the building where riders will exit is receiving some work now. They’re finally closing up the show building walls above the exit as well. Below the ride’s entrance the trains will soon rush to their top speed of 60MPH: 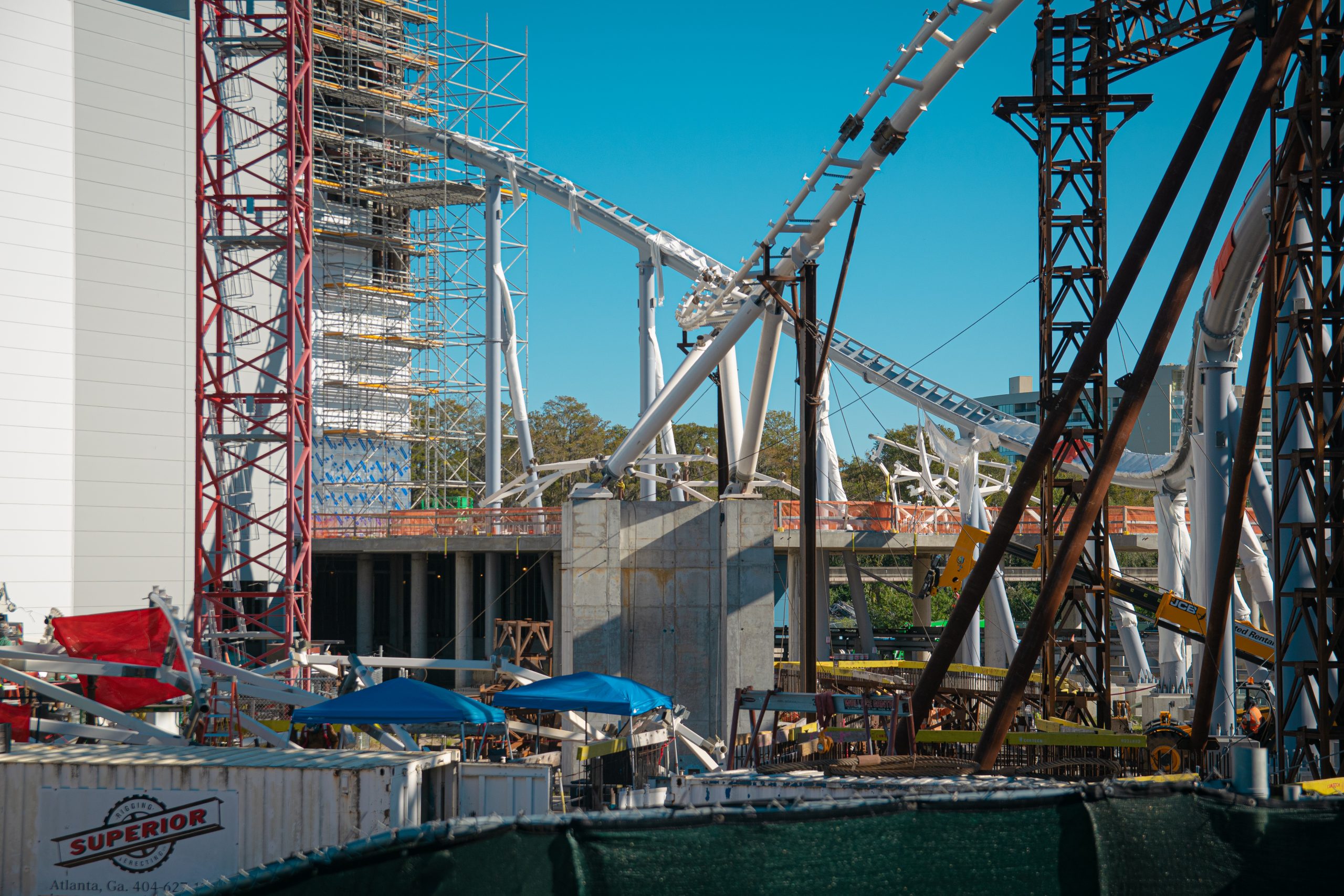 From the below image you’ll get a bit of an idea of how much of the canopy has yet to be added. The tallest part of the structure will stick out over the show building and cover the ride tracks’ tallest point: 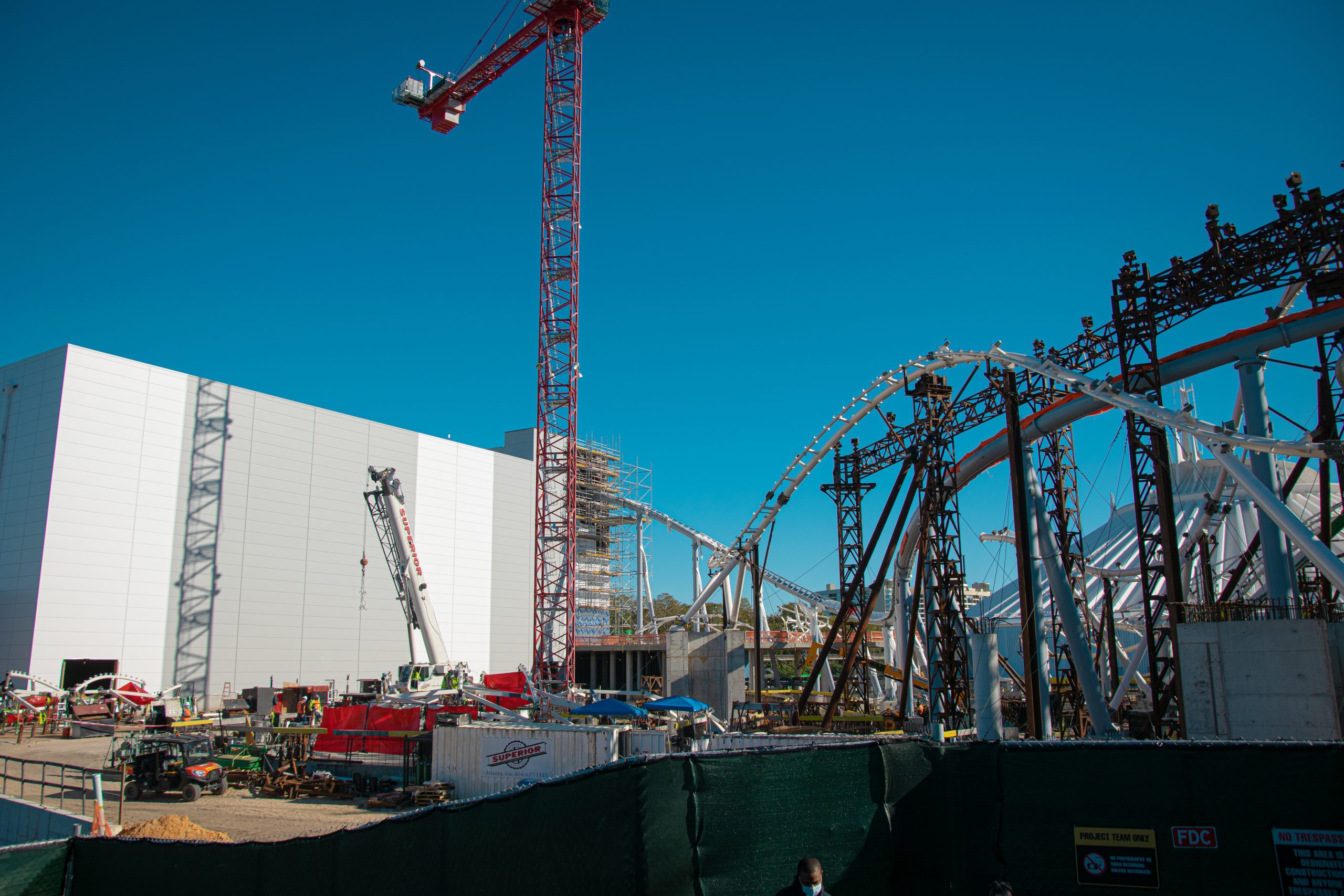 Overall, there is definitely a nice shape to the canopy now, showing how wavy and clean the lines for the structure are: 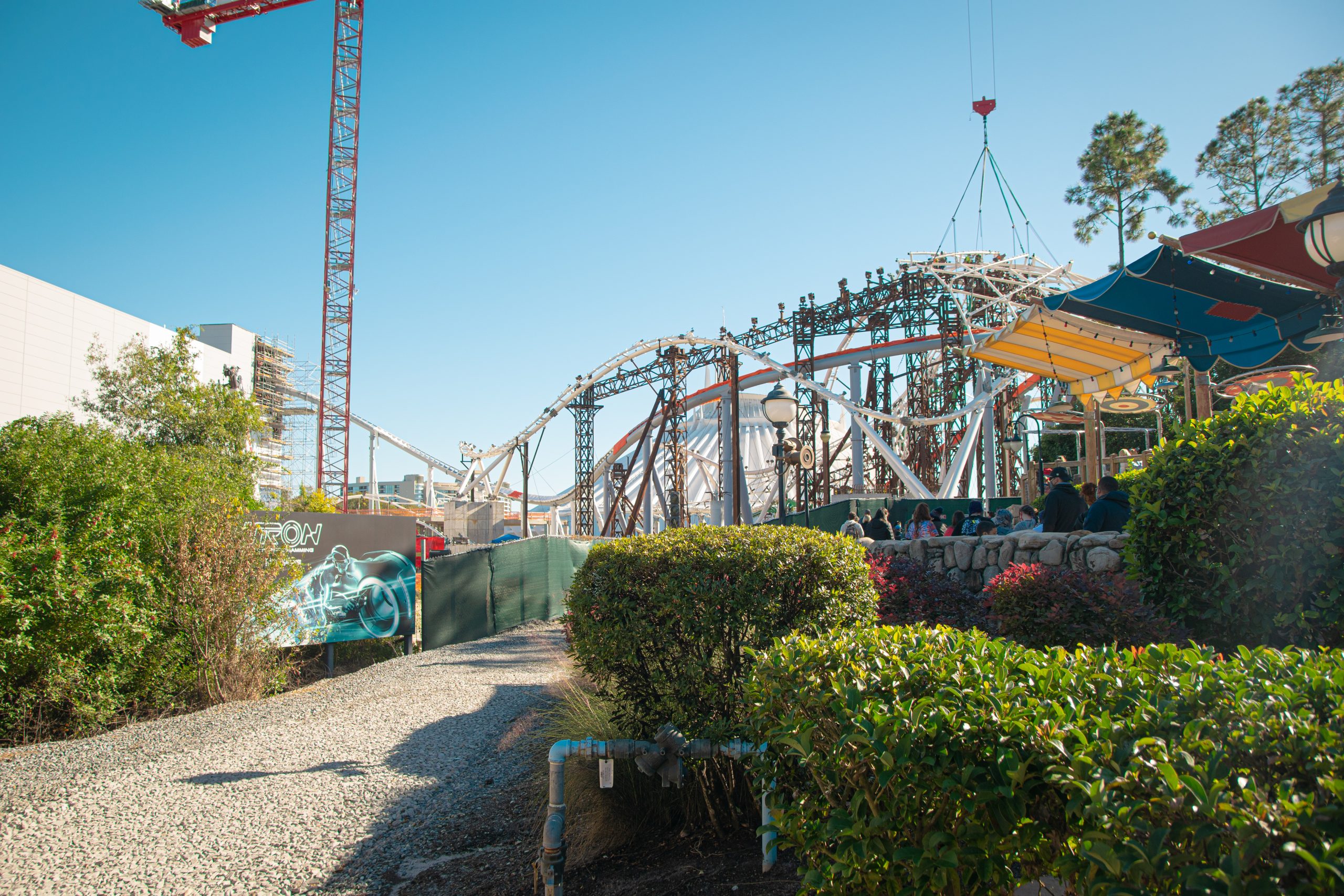 One thing that’s almost awkward with the MK version vs. the Shanghai version is the angle at which you can look at the ride’s superstructure. At Shanghai Disneyland, the ride is only approachable and visible from the opposite side, this making the footer holding up the canopy supports look incredibly elevated: 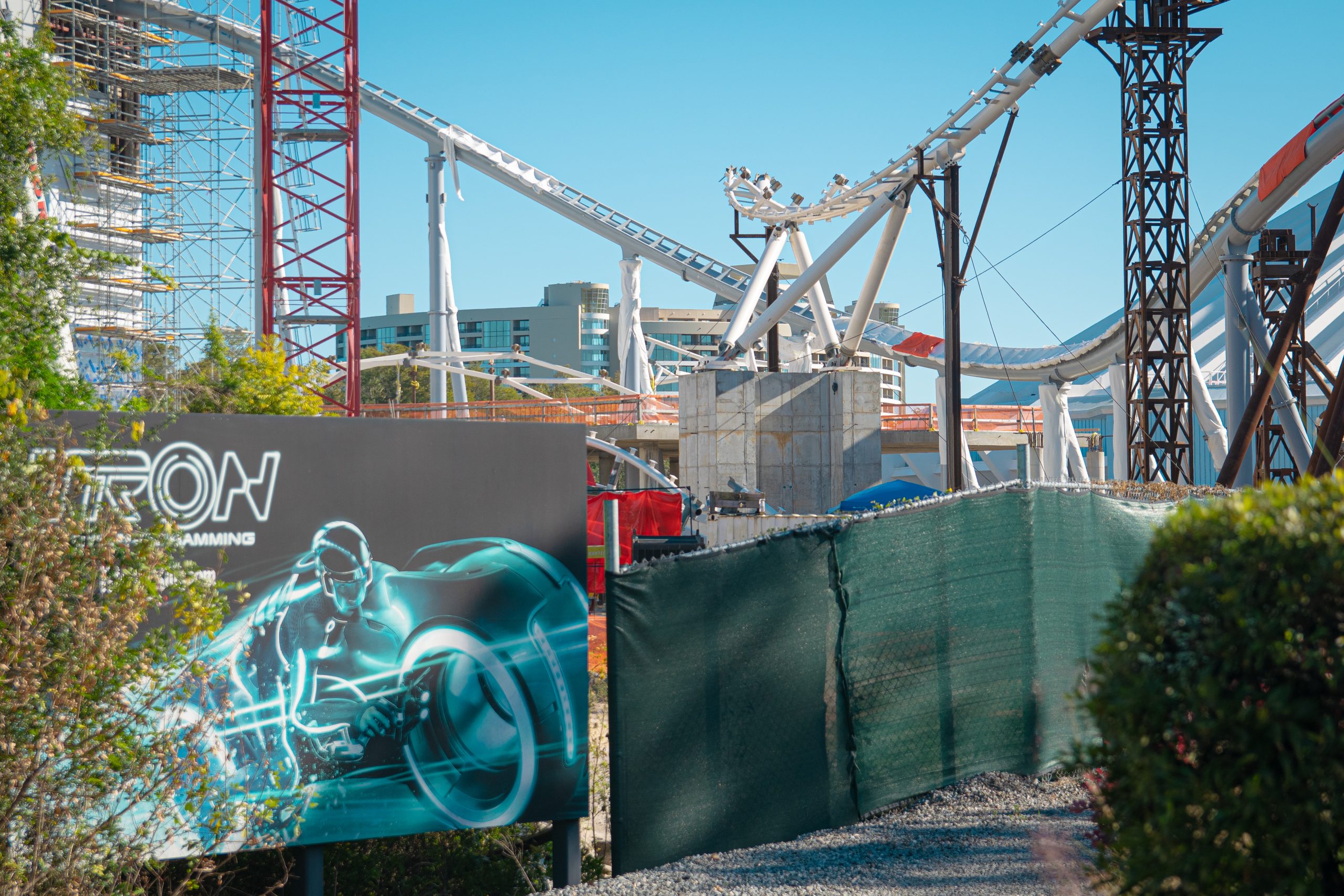 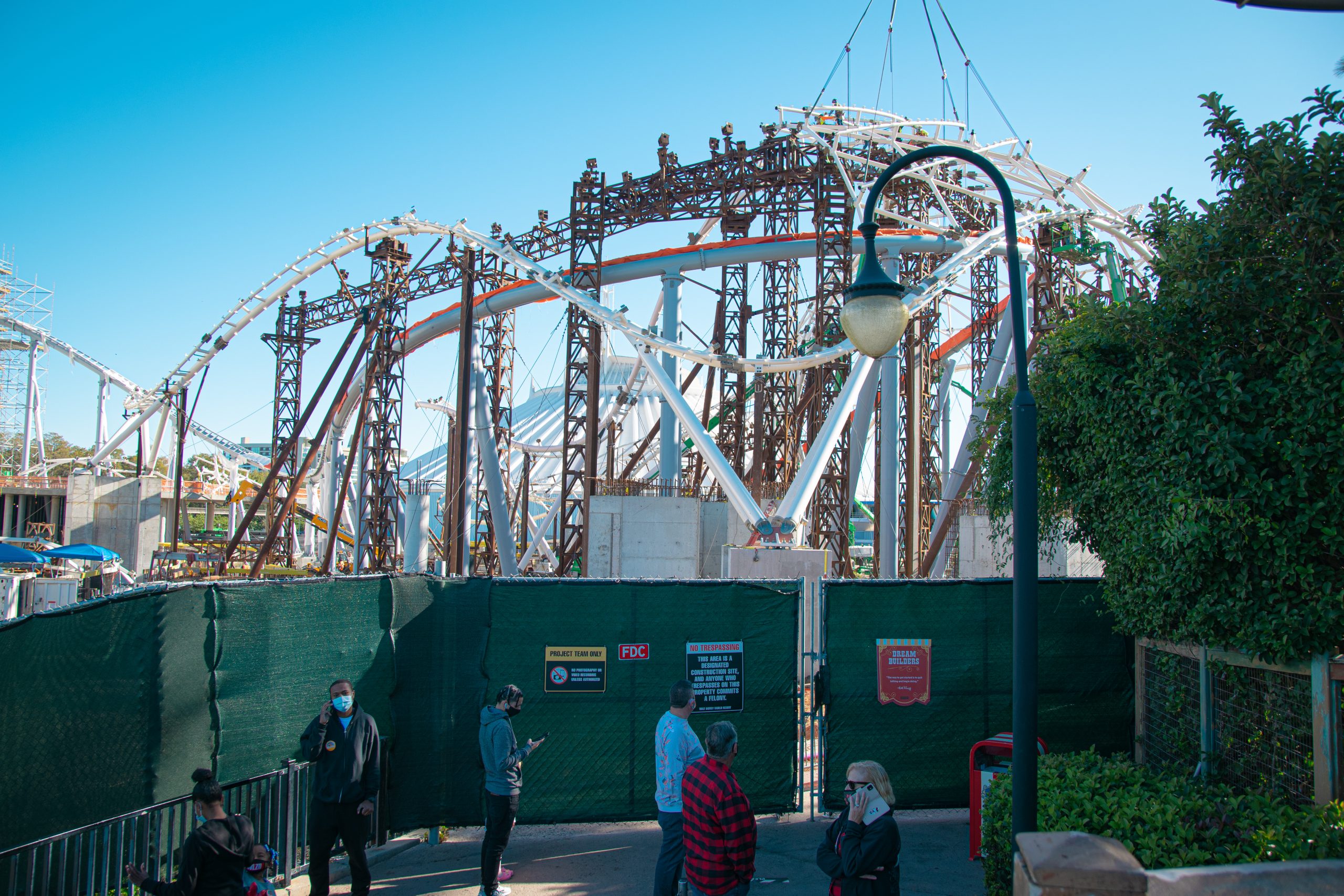 Let’s take a closer look at the canopy structure: 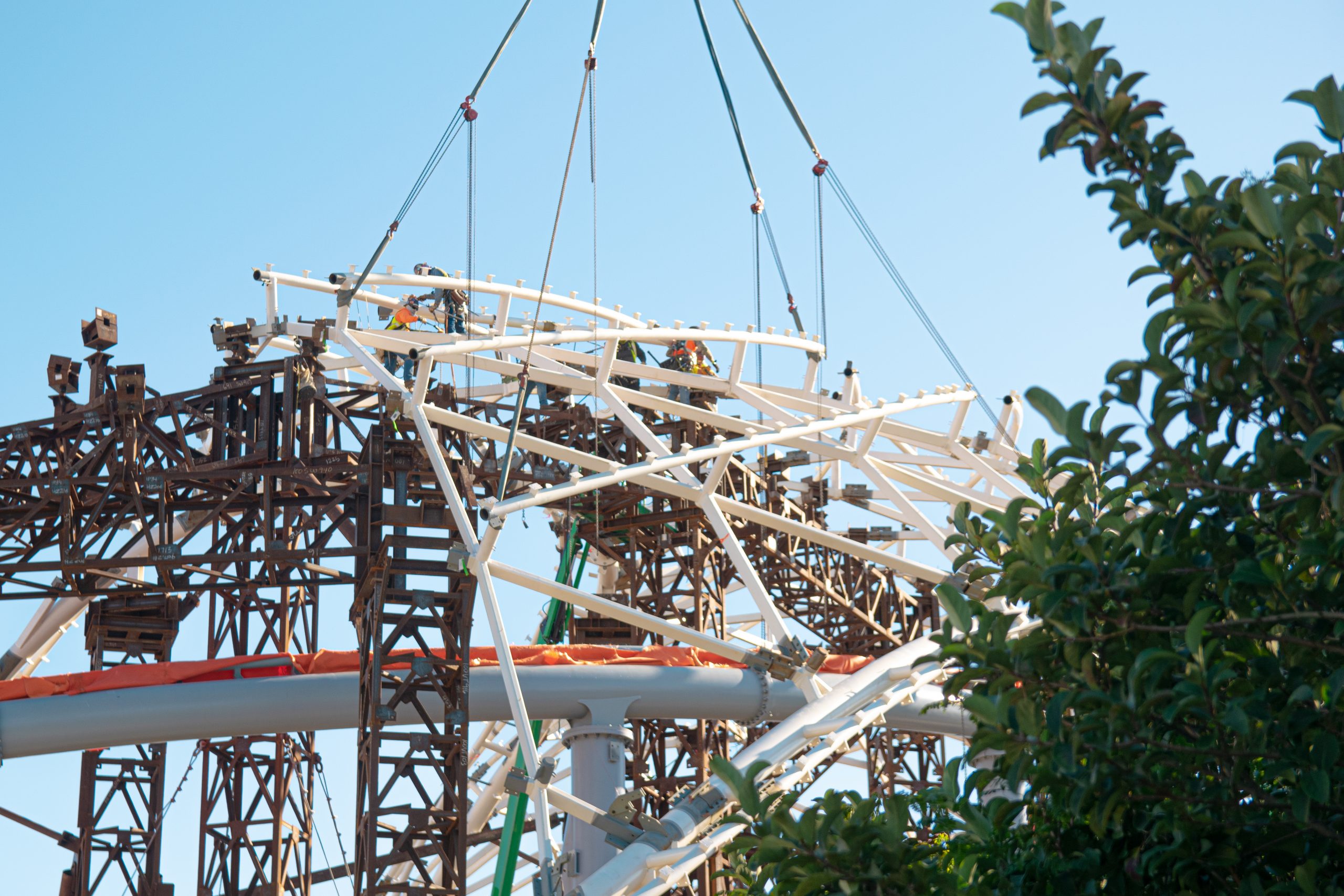 Without all pieces connected, it nearly looks like another coaster being built alongside: 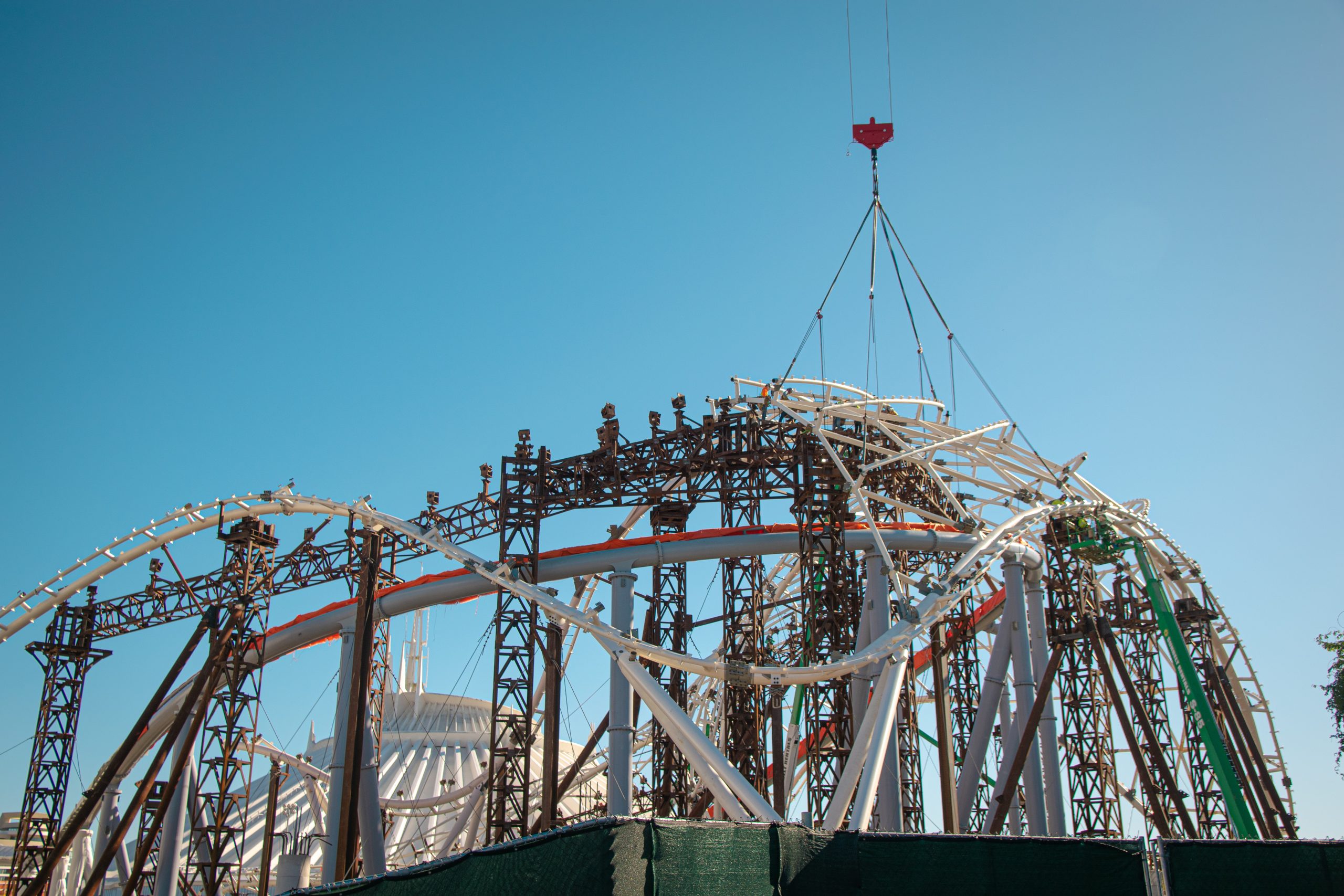 Once all the white pieces are in place, a sort of transparent and highly detailed fiberglass will be installed over it, giving TRON its signature canopy look. The inside of the structure will remain bare and will house thousands of LED lights that will interact with music and trains as they pass by. 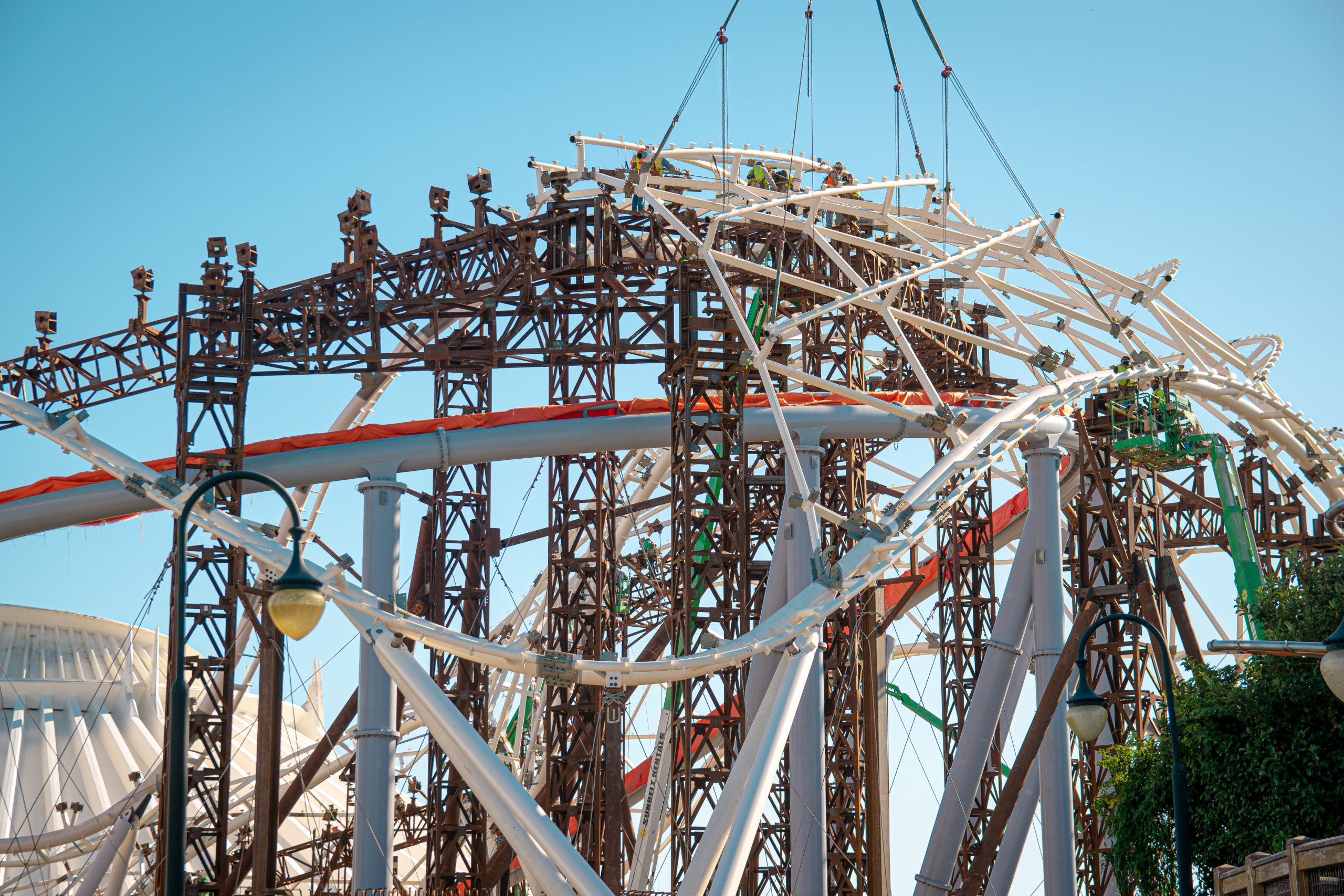 All the brown supports are temporary and once the structure is sound enough to support itself will all be taken away. 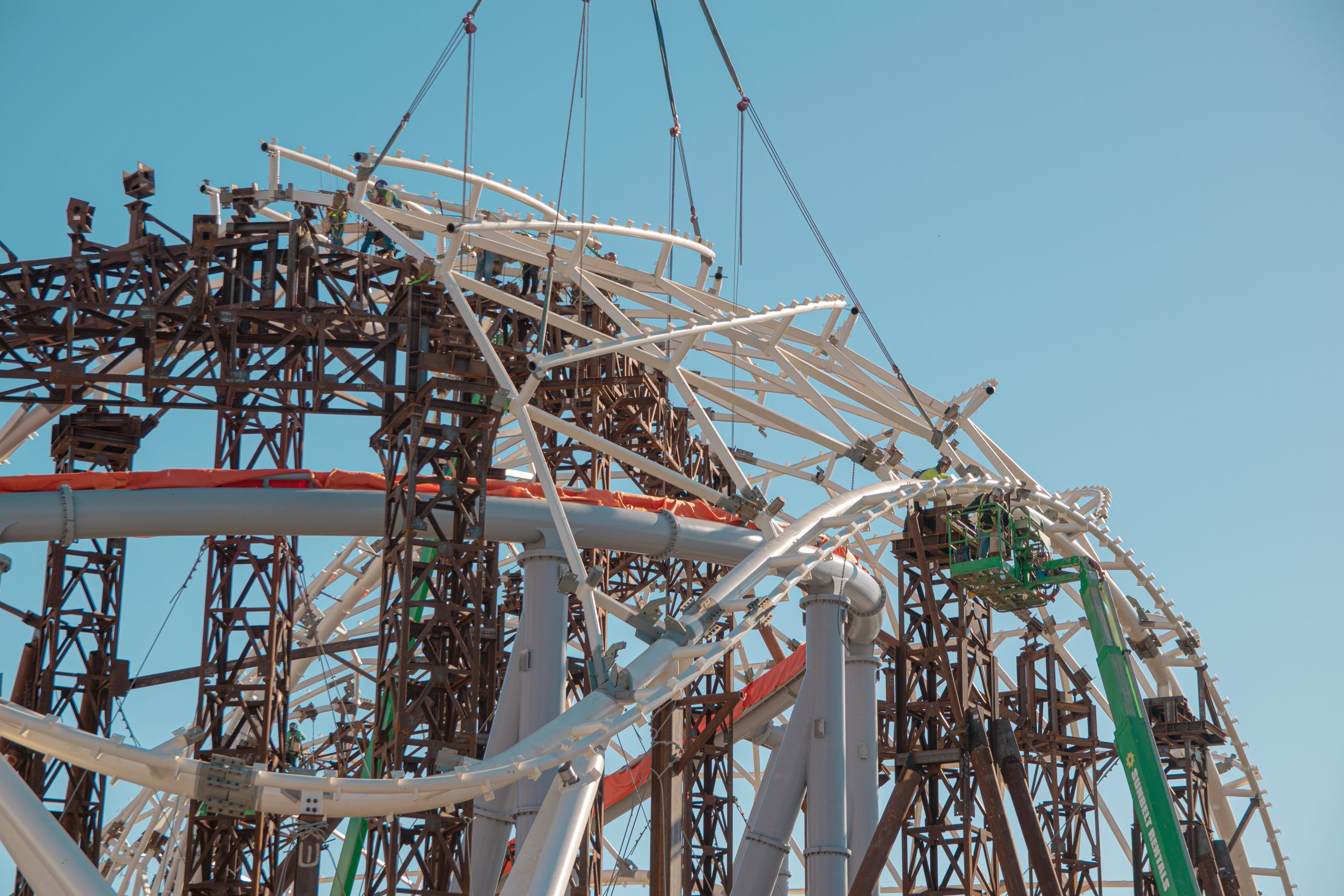 In the afternoon sun, you can appreciate how much of the show building is already hard to see, and how nicely TRON Lightcycle / Run will make for a truly spectacular backdrop for Tomorrowland: 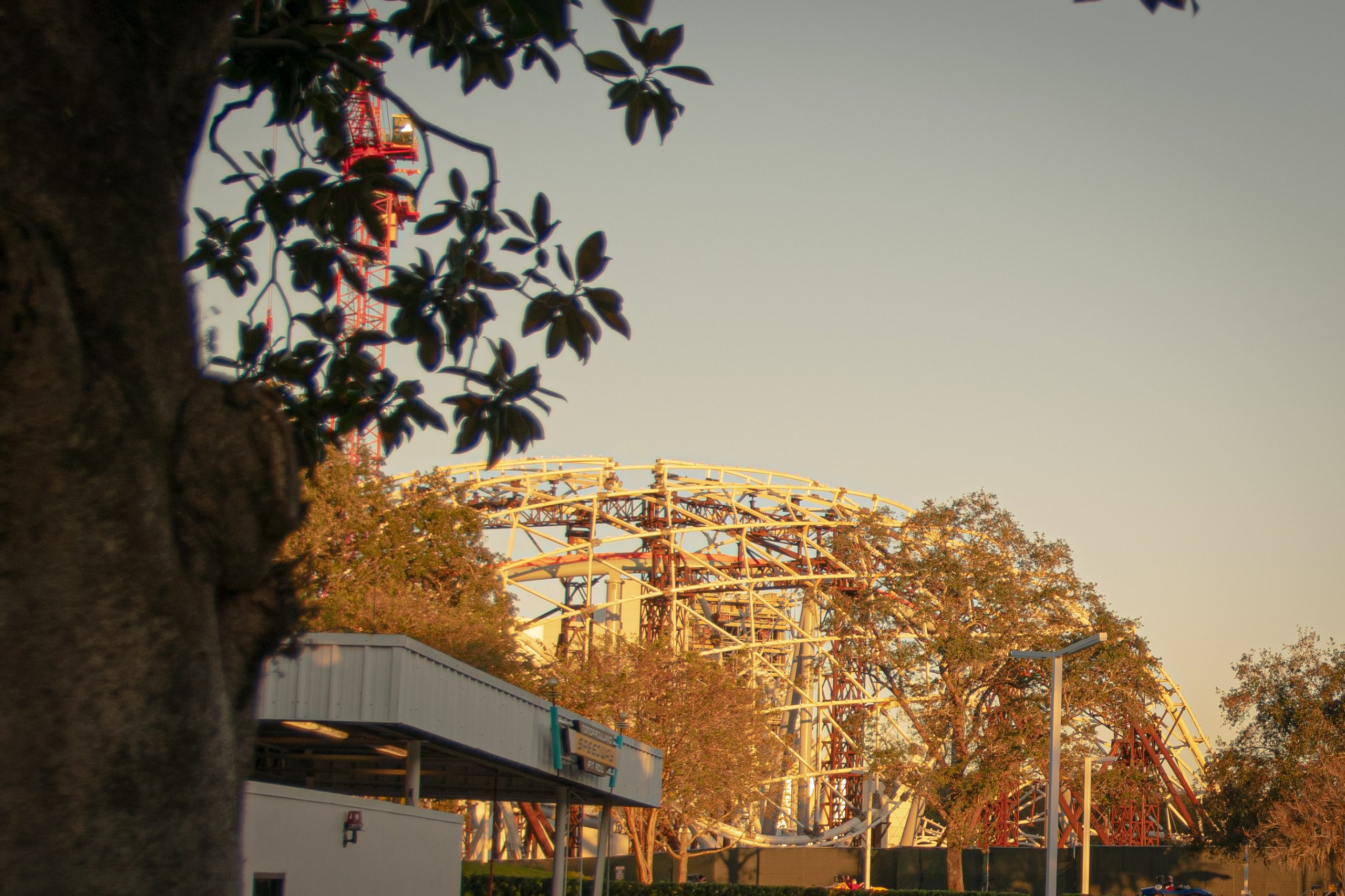 I don’t particularly like the Tomorrowland Speedway, but I am going to be riding that a lot once TRON Lightcycle / Run is open: 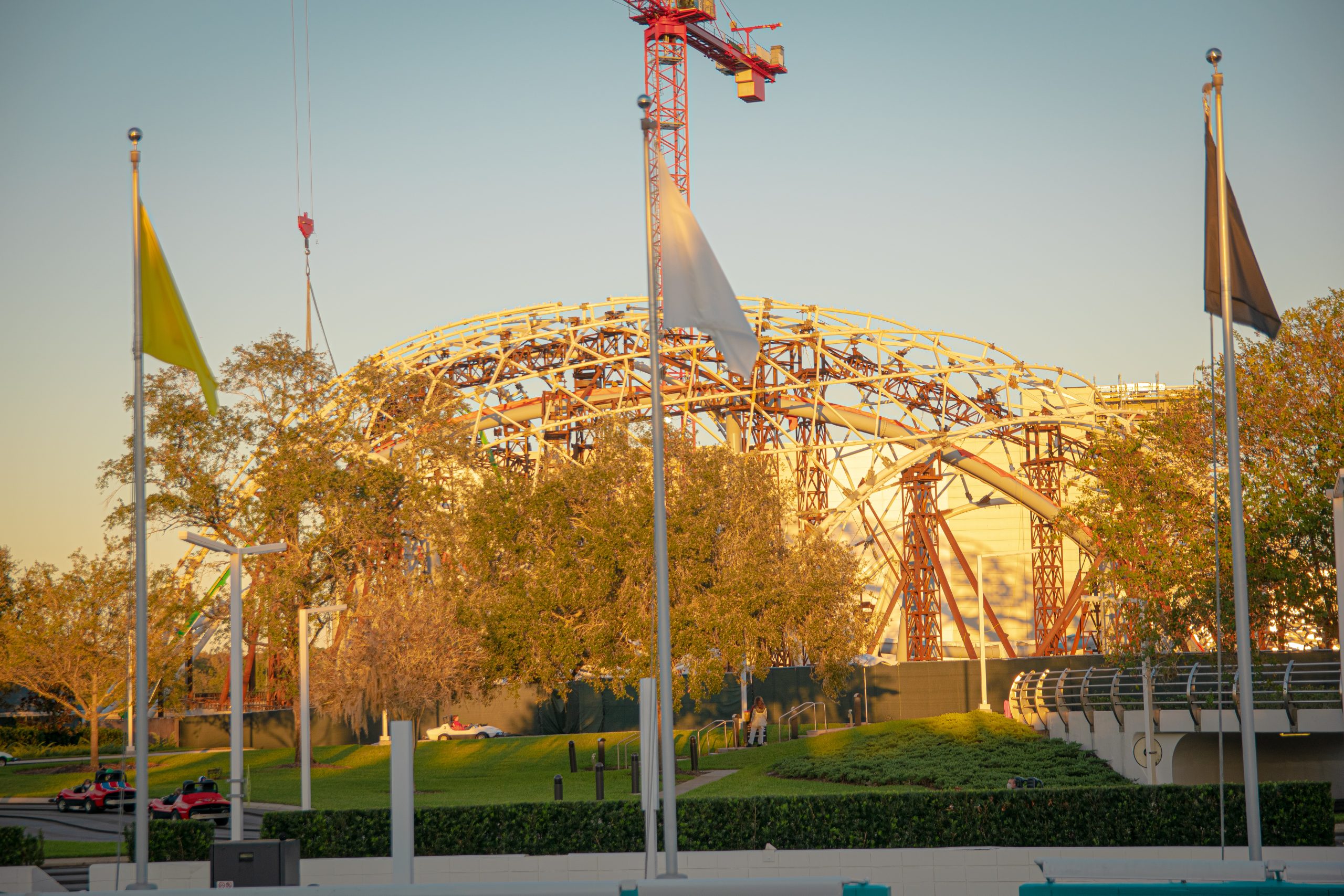 Thank you for joining us for this quick TRON update! Word on the street is still a delayed opening, but many seem to think Disney is rushing the project as much as they can for a potential late 2021 opening anyways. Nothing is certain for now, but it remains incredibly satisfying seeing them truck along with construction for this massive new E-ticket.