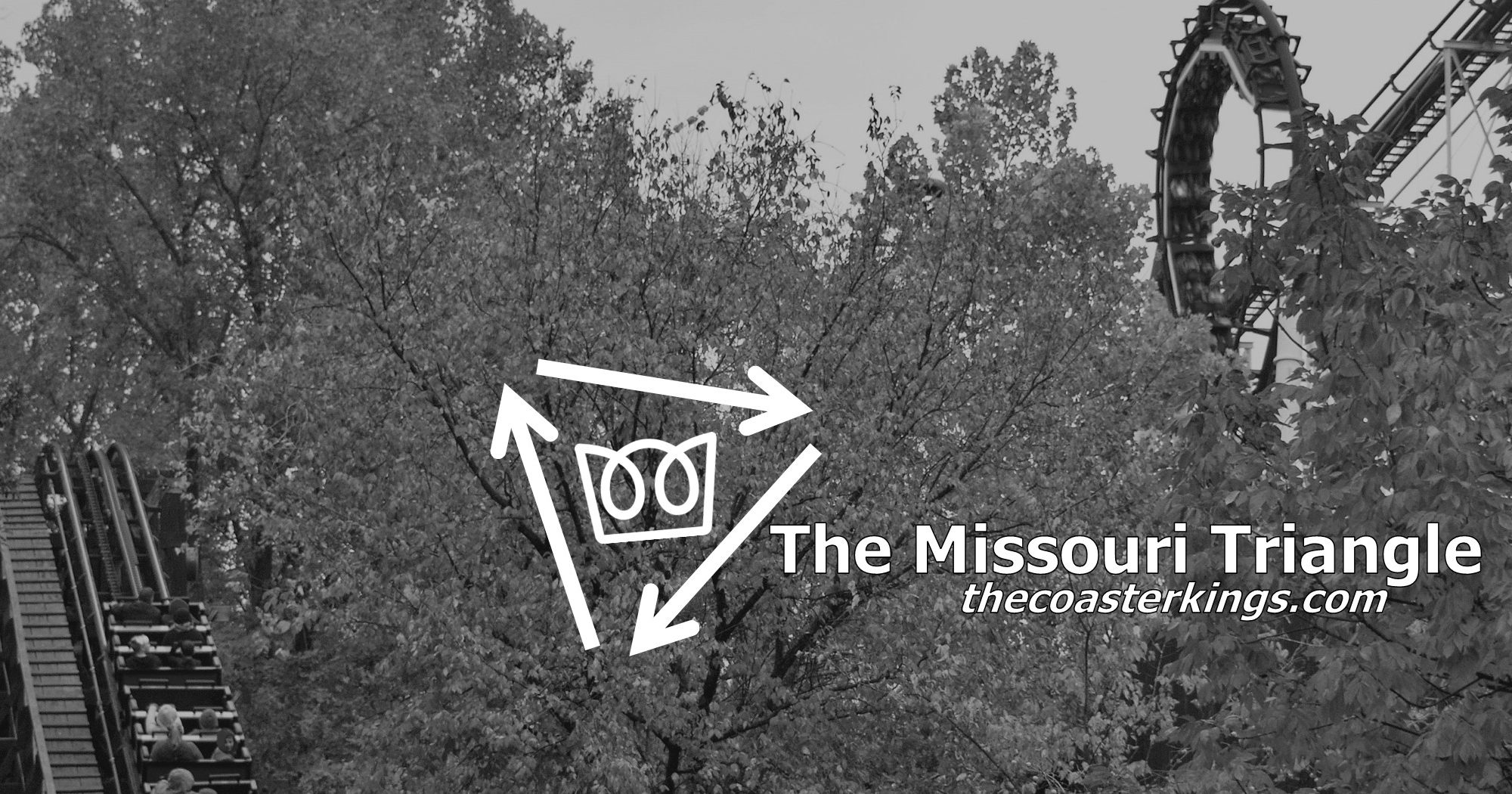 After a shorter day at Worlds of Fun, Pete and I had come to our final day and park of the Missouri Triangle. Six Flags St. Louis opened in 1971 as the third and final Six Flags park developed under the vision of Angus Wynne – before expansion switched from new park development to acquisition. It is apparent that the concept had been streamlined by the third try. While the six flag-themed areas remained, far less emphasis was placed on nation specific theming. By the 70s it was obvious rides are why people went to Six Flags and the park opened with multiple of what made the Six Flags concept work: two Arrow log flumes, two Arrow mine trains, and two Arrow car rides. While the park has undergone some dramatic changes through the years, it benefits from this simplified formula, and, despite the changes, the park feels cohesive. What was it about this “lower-tier” Six Flags park that made it a highlight of our trip?

The lodging options around Six Flags St. Louis are not bountiful so we stayed in a hotel adjacent to the St. Louis airport. On Saturday morning we woke up a little early, got some breakfast, and made a 45 minute drive to the park in time for the 10:30am park opening. When it comes to first impressions, Six Flags St. Louis has one of the strongest; its skyline layered against the parks hillside setting is very striking. If you’re an enthusiast I highly recommend considering a Six Flags Membership. While the membership programs and tiers are a little confusing the Diamond Elite tier does come with preferred parking, two skip-the-line passes with every park visit, and 50% off all food and merchandise purchases. The preferred parking at Six Flags St. Louis places you only a few steps away from the entrance. The park’s entrance plaza, loosely themed to the 1904 World’s Fair, is where the streamlining of the Six Flags concept is immediately evident. You are greeted by a straightforward row of shops and a small fountain with the gate to the included with admissions Hurricane Harbor to the right. We made our way left to one of the rope drop points ready to head to our most-anticipated coaster at the park, Mr. Freeze Reverse Blast.

One of the earliest Premier LIM (linear induction motor) launch coasters, Mr. Freeze opened in 1998 alongside its mirrored clone at Six Flags Over Texas. While there were some hiccups in these coasters development (which included the addition of “booster” LIMs on the coaster’s vertical spike) these coasters opened as one of the most impressive coaster models ever created. St. Louis’s Mr. Freeze also benefits from a unique location in the center of the park’s Thunder River rapids ride. The swapping of over-the-shoulder restrains for lap bars in 2002 and the turning of the trains to launch backwards in 2012 has only increased this ride’s relevance in the thrill landscape. Starting with a 70 mph backward launch out of the station Mr. Freeze sends riders into an intense inverting top hat, large swooping overbank, and then up a 218 ft vertical spike before taking the entire course forwards. This coaster is one without a dull moment but the incredible launch and hangtime into the forward drop down that massive spike are definitely highlights. The park was only operating the coaster with one train but we were able to get two rides on this beast before moving on to the other park’s offerings. Some people argue that Six Flags St. Louis is a weaker park because it lacks a hyper coaster but I would take this massive launched shuttle coaster over a B&M hyper any day!

With our minds melted by Mr. Freeze we headed up the hill towards the park’s classic 1976 PTC woodie, Screamin’ Eagle. Screamin’ Eagle was legendary coaster designer John Allen’s final coaster and merges out-and back sensibilities with a significant use of terrain. The swooping pre-drop and high speed turns later in the layout show a real evolution in coaster design. While we found it running a bit rough, there is a real power to Screamin’ Eagle which took both Pete and I by surprise. Don’t go in expecting King’s Island’s Racer. We got a ride on the park’s Vekoma Boomerang, relocated from Six Flags over Texas in 2013, which had the expected intensity but suffers from running aging Arrow rolling stock. Next on the docket was the park’s Arrow River King Mine Train which is one of our favorite Arrow mine trains we’ve ridden. It has a great layout and surprising amount of forces. Pandemonium, the parks Gerstlauer spinning coaster, opened up right as we were walking by so we were able to get a ride on this family coaster. While nearly identical to Spinning Dragons, Pandemonium features a continual moving loading station and some custom landscaping left over from the ride’s life as Tony Hawk’s Big Spin. With these two family coaster credits secured we made our way towards the back of the parks Britania section for The Boss. This 2000 CCI terrain woodie features a 155 ft drop and top speed of over 66 mph. Pete described it as if Kings Island’s Beast went to college. It has all the speed and intensity of Beast while adding incredible pacing and airtime into the mix. Boss became my 150th coaster credit (I’m quite the credit baby in the Coaster Kings Team) and one of the best wooden coasters I’ve ever ridden.

We made our way back towards the front of the park and got a ride on the park’s classic Arrow log flume. St. Louis features two separate flumes running alongside each other. While both sides rarely run at the same time both flumes had water flowing in them making for some lovely photos. Adjacent to the log flume is the park’s highly regarded GCI American Thunder. American Thunder opened in 2008 and features a compact twister layout based on Thunderbird at Finland’s PowerLand. It runs a little rough but features some great airtime and head-chopper moments. With Screamin’ Eagle, Boss, and American Thunder Six Flags St. Louis has a pretty unbeatable wooden coaster line up. Not only are all three excellent coasters, they also act as a wonderful history of wooden coasters and how the approach to them has changed through the years. The summer heat was getting to us so after our ride on American Thunder we headed to Hurricane Harbor. Our visit coincided with a promotion for members which included a free Dole Whip so I couldn’t miss the opportunity despite the walk. Hurricane Harbor seems to be a pleasant water park though quite a few of the slides were down for the day. After our Dole Whip break we stopped by the flash pass booth to pick up two complimentary flash passes for Mr. Freeze before heading into the park’s Studio Backlot area and the final two coasters in the park.

Our longest wait of the day proved to be for Batman the Ride. This B&M invert remains one of the park’s most popular coasters for a reason. It’s intense and snappy ride is one that holds up over 25 years after its 1995 debut. Unfortunately, I had ridden the original Batman at Six Flags Great America earlier this summer and the lack of landscaping and near misses really does detract from the overall experience of this cloned ride. Pete said he preferred Patriot‘s graceful power over Batman‘s foot-ripping intensity. Our final new coaster credit was the Arrow/Vekoma looping creation Ninja. Started by Arrow for Vancouver’s Expo ’86 Scream Machine was completed by Vekoma after Arrow/Huss fell into bankruptcy. After the Expo the coaster was moved to Six Flags St. Louis and given its new name for the 1989 season. Ninja has a reputation for being one of the worst coasters on earth. If you’re like me and love Arrow intensity and clunkiness you’ll probably enjoy Ninja. If you’re like Pete and can’t stand the discomfort of Arrow rolling stock combined with awkward transitions and intense elements this probably wont be your favorite coaster. Ninja was only running one train and proved to be the second longest wait of the day. With all the coaster credits secured we went for one final ride on Mr. Freeze which had accumulated a long wait due to one-train operations. With that final ride we grabbed a late lunch and one final Dole Whip before heading back to our car and Ohio.

Six Flags St. Louis proved the biggest winner of the trip. We went to the park prepared for a busy Saturday exasperated by poor Six Flags operations. Instead we found some of the friendliest staff, every major coaster open with the park, and a pretty cohesive overall park presentation. Like other Six Flags properties St. Louis does suffer from Six Flags habit of just leaving former attractions to decay (this is especially noticeable with the former go-karts at the base of Boss and antique car ride next to American Thunder). There also is plenty of room for improvement in the park’s food and merchandise, though the 50% off offered with membership makes these areas much more acceptable. The overall coaster line up is much stronger than the park’s reputation suggests. Mr. Freeze and Boss are both elite coasters which deserve far more attention than they receive. With some of the lowest tickets among regional parks Six Flags St. Louis is absolutely a park I would recommend. Like Missouri as a whole, I hope more enthusiasts start warming up to this wonderful park. I hope you enjoying going on this trip through the Missouri Triangle with me! I can’t wait to go on another regional adventure. What set of adjacent parks would you recommend me to try next?