Derrion: I hope everyone is enjoying summer! The park’s peak season is in full swing and it could not have been a better time to visit, although it was extremely hot. There were not many changes this time around, but we were able to capture some new additions to West Coast Racers. Lets take a look!

The park has moved ticket will call to the front entrance. Guests who would like to purchase their admission tickets at the park will have to do it after passing the security clearance. 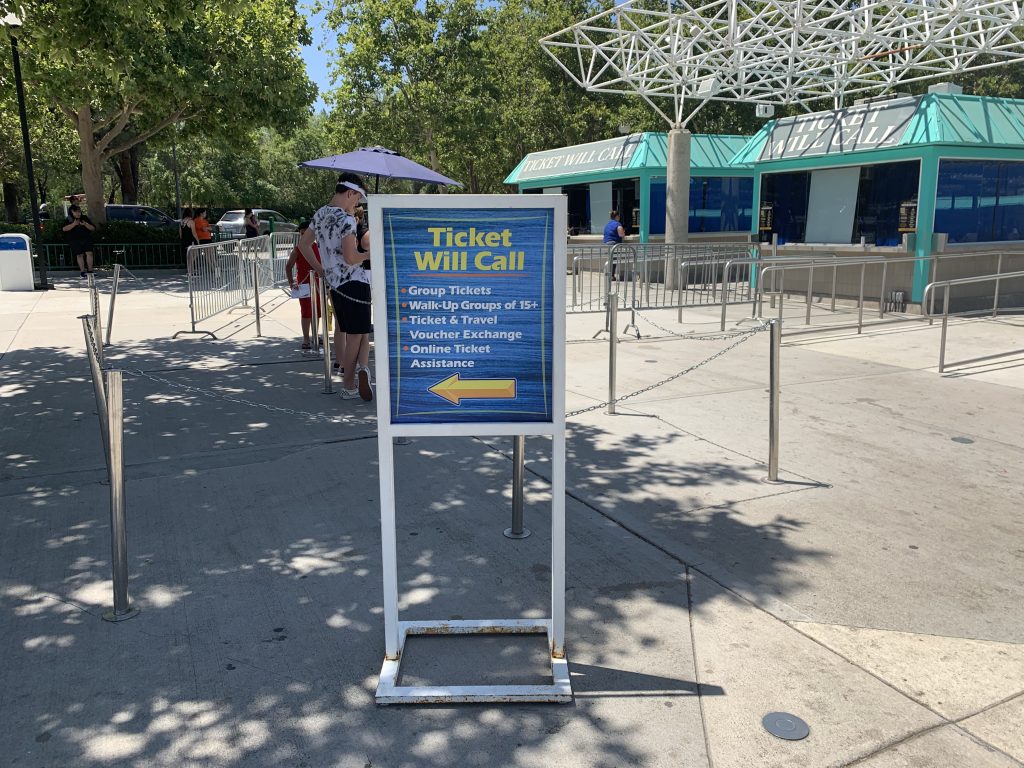 We highly advise against this as the line to purchase a ticket gets pretty long. You can save time and money by purchasing them online at the website here. 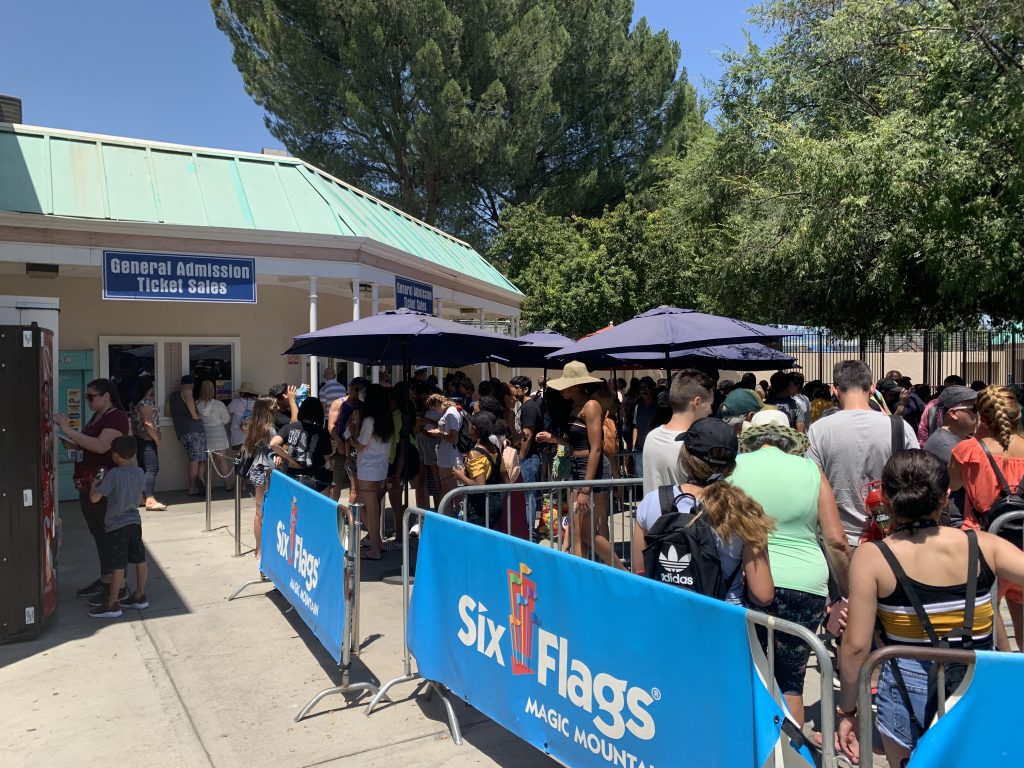 Did I mention it was over 100°F outside today?  My mission for today’s visit was to stay cool and out of the sun as much as possible. If you want to get wet but not drenched Jet Stream is a great way to cool down. 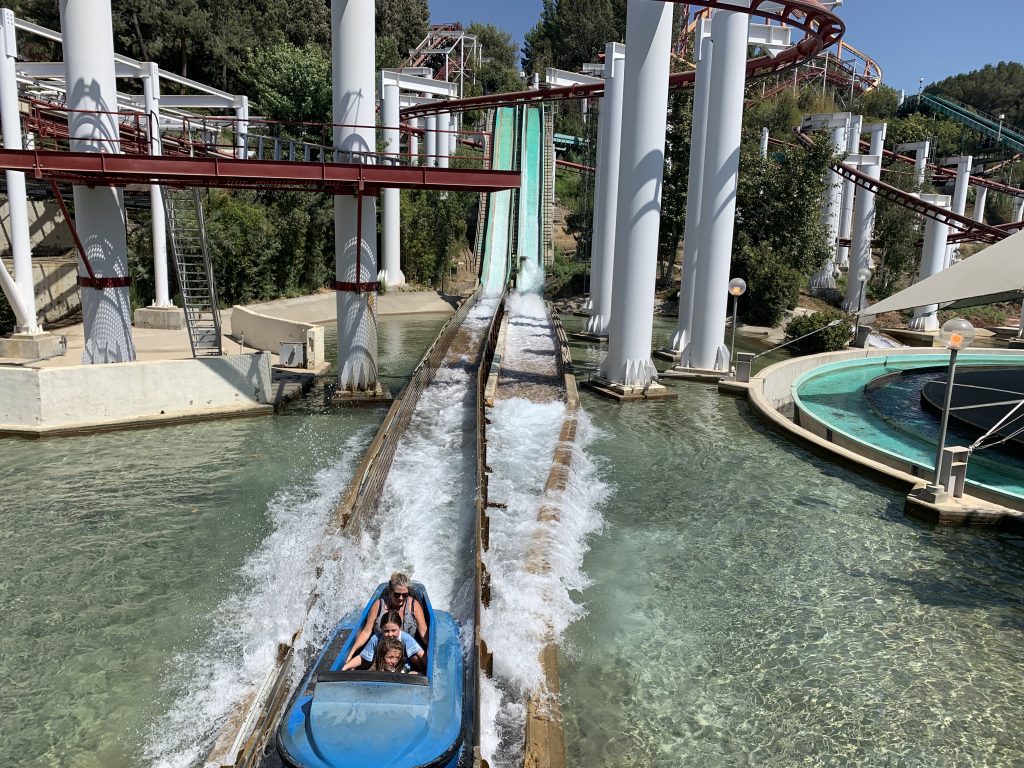 Just outside of the entrance of Jet Stream, the Soda Shack has reopened for the season. This is a great place to get some snacks and refill your souvenir/membership bottles. 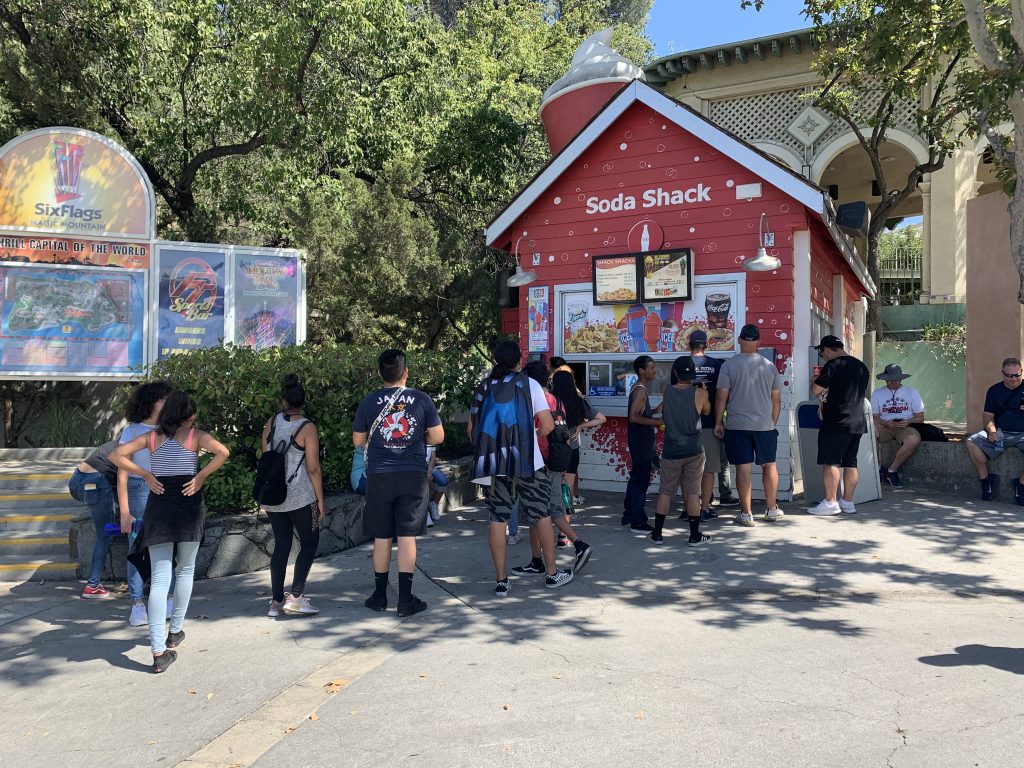 When all else fails, why not swing into the sky going 75 mph for a breeze. Crazanity is an amazing free spin and offers great views from all angles of the park. 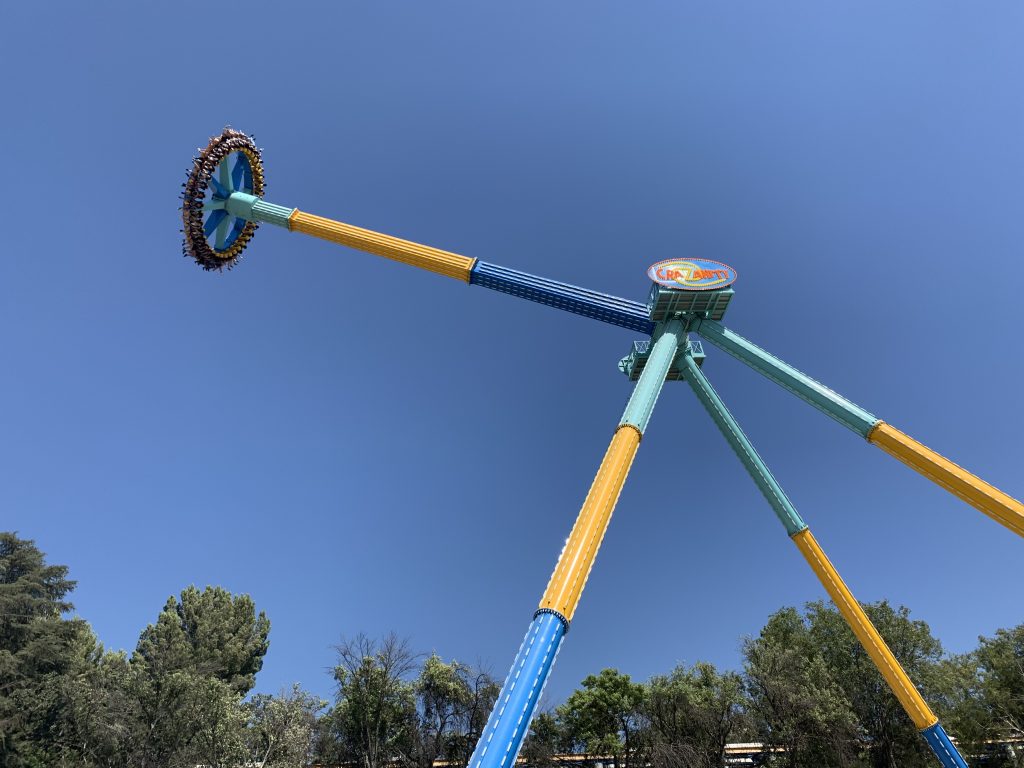 This was one of the best ways to cool down today. The A/C worked wonders in the Gearworks Theater.  Kwerk is back for another season in the park. 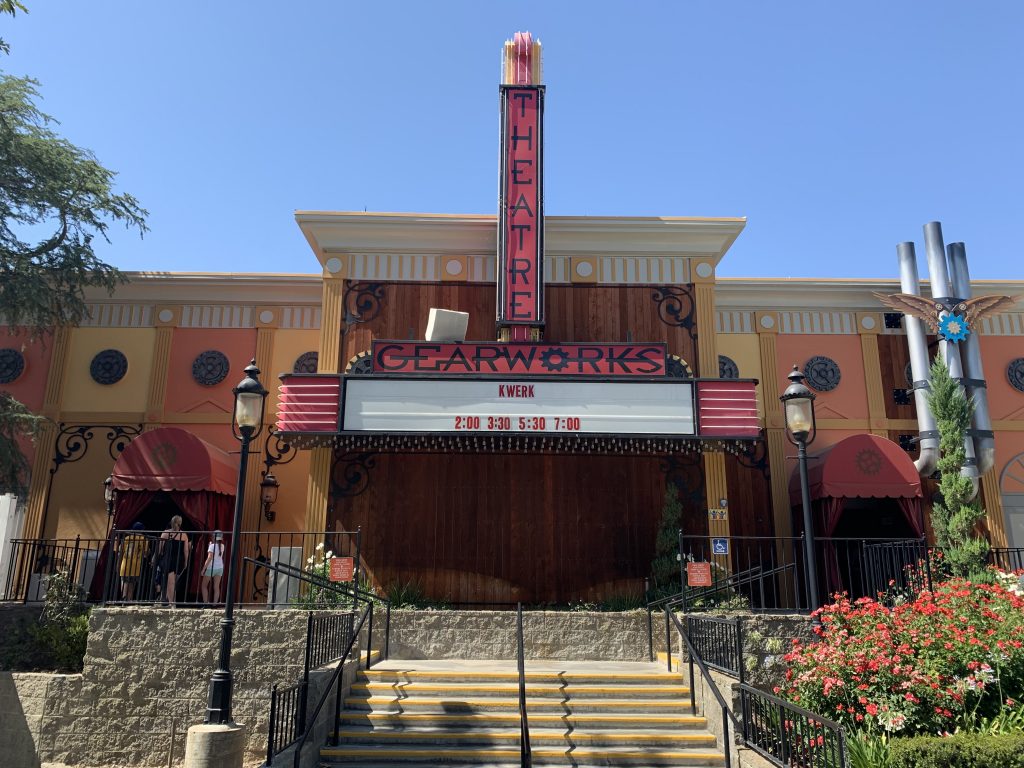 The show itself has evolved so much since its debut in 2015. The stage aesthetics are beautiful and the classic humor drives the shows entertainment. Definitely check it out on your next visit! 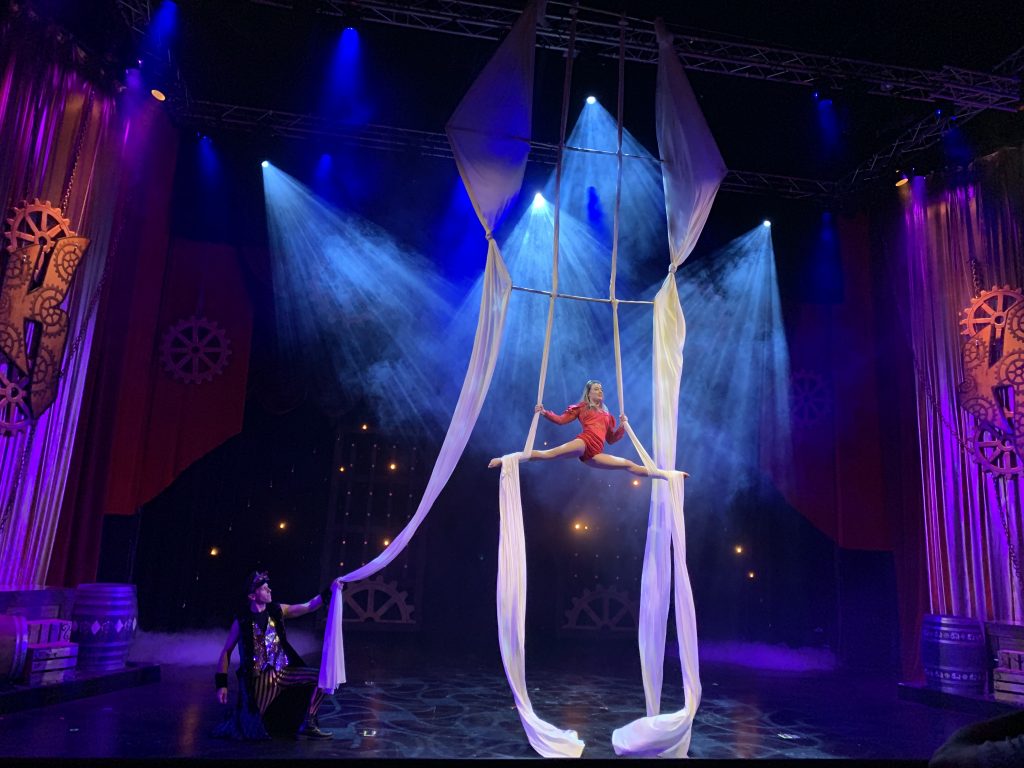 Also in the Screampunk District,  the home to my favorite RMC in the park: Twisted Colossus. Unfortunately, this was not the only closed attraction for today. 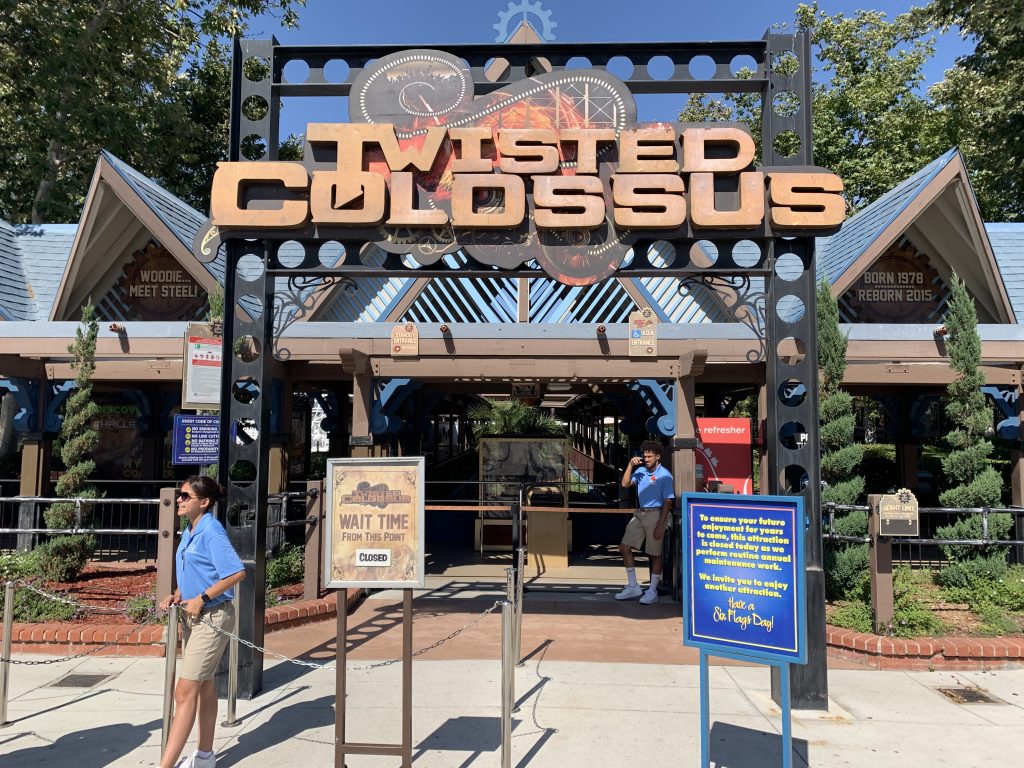 Lex Luthor: Drop of Doom has been closed recently on my past visits to the park. 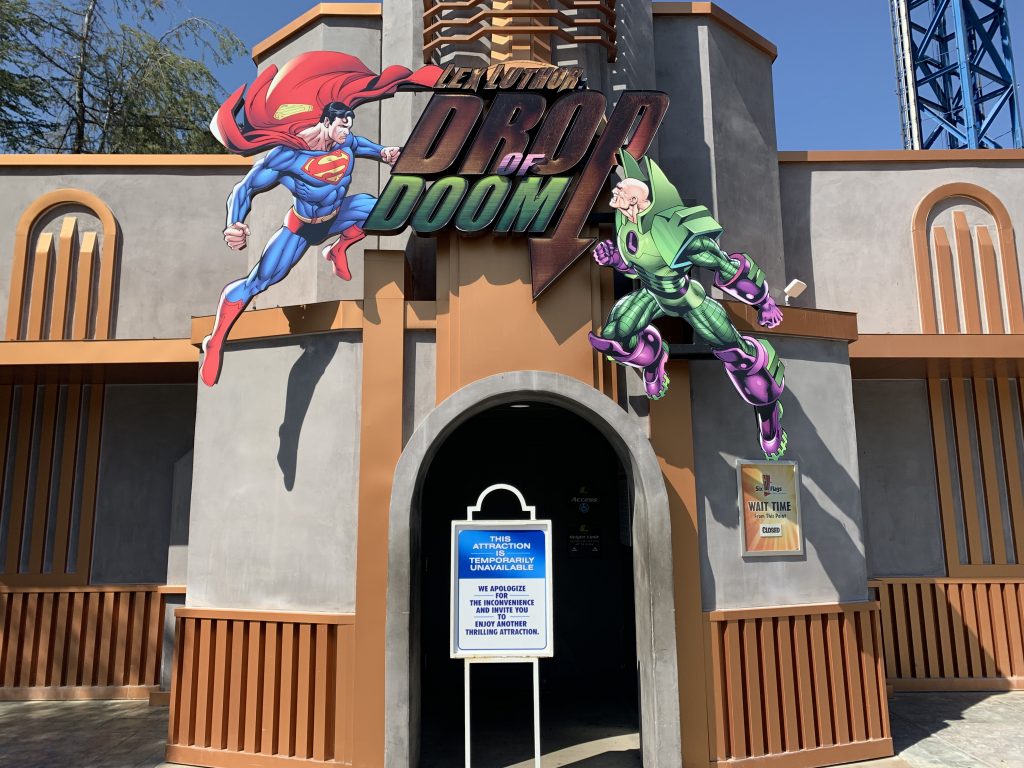 X2 was down as well on this visit. There is not word if these attractions are receiving routine maintenance or if there are having technical malfunctions. 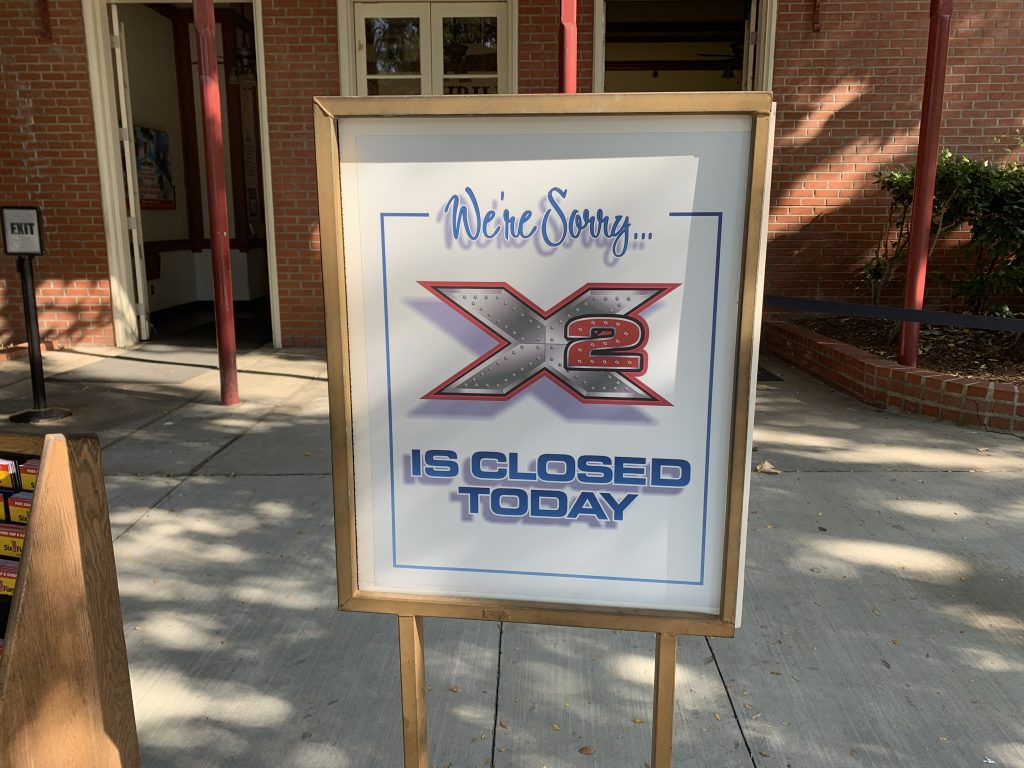 I couldn’t close off the park update without addressing the elephant in the room. Green Lantern: First Flight has been closed for a couple years now and it was announced that it will no longer be in operation at Six Flag Magic Mountain. It was then rumored that it would reopen in the park. Here at thecoasterkings.com we know the ride will re-open eventually. However, whether it be at another park or in our home park, we still do not know. Once we have confirmed details you all will be the first to know. There are still no signs visually of demolition as the park is focusing on its 2019 project that will open later this year. 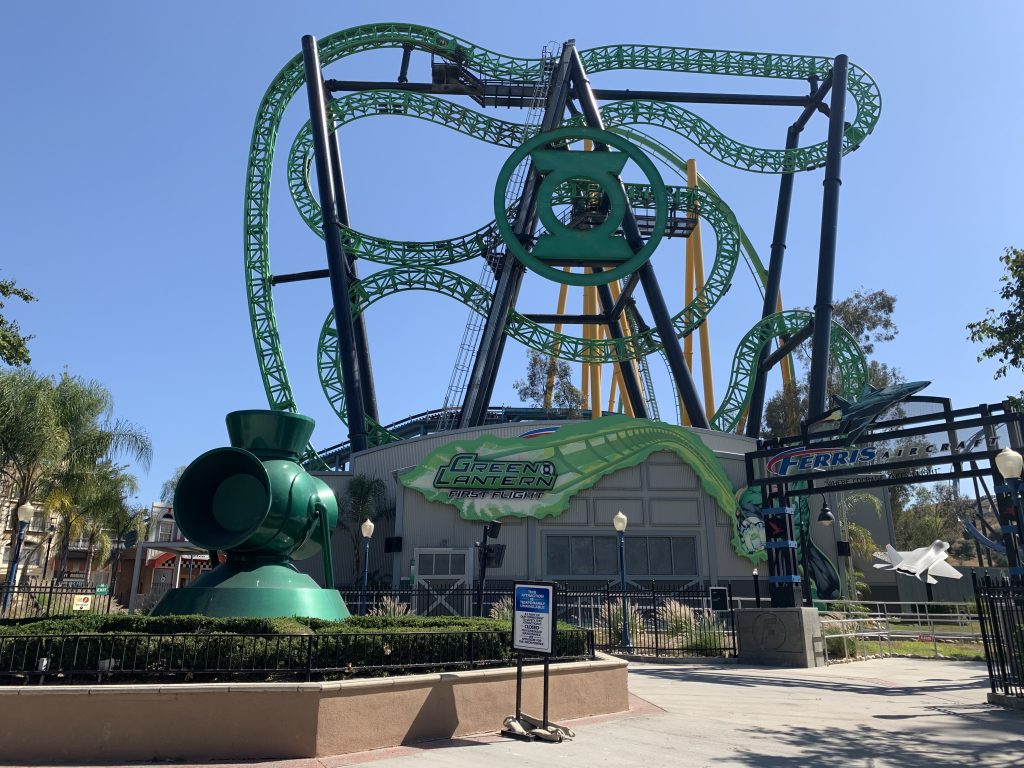 Ah yes! The parks new 2019 attraction: West Coast Racers. After our construction tour of the site last week there has already been more progress. 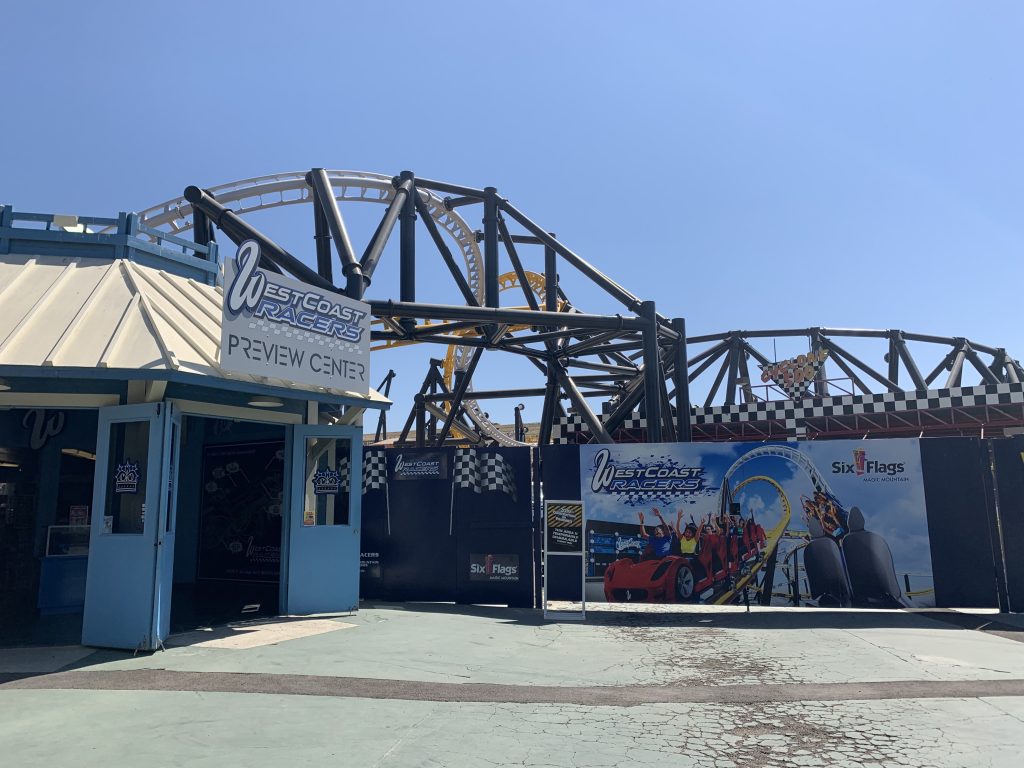 The first change you immediately see is the completion of the top gun element and first turn around. There is a mess of supports in this area! 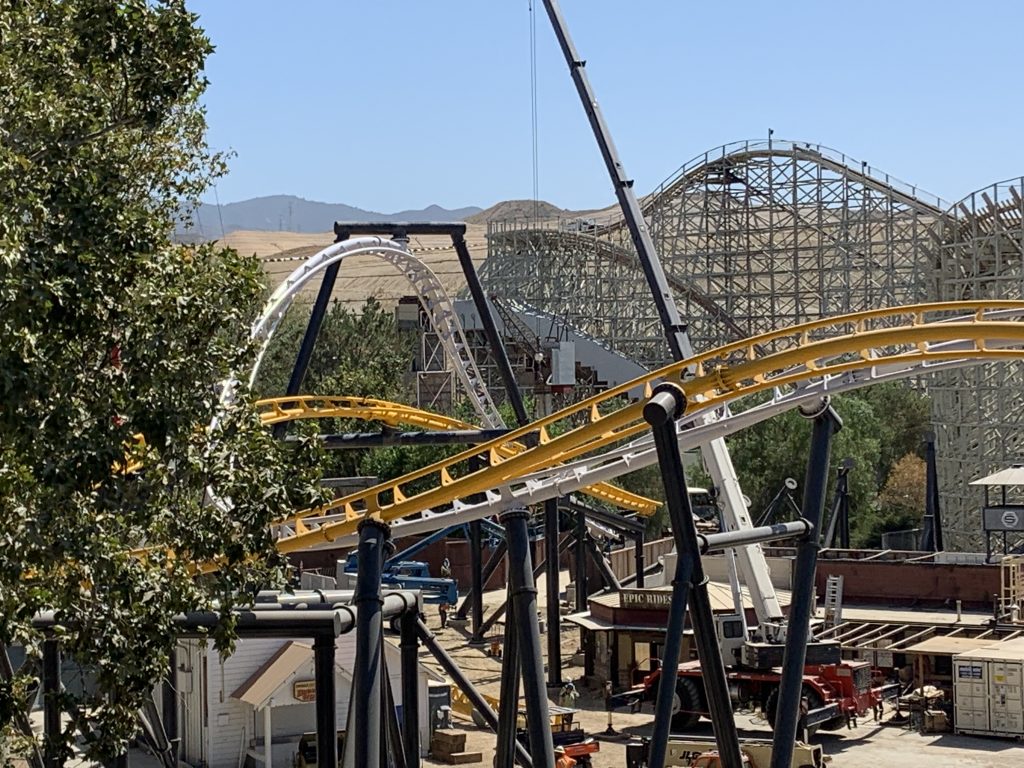 Speaking of supports, the spaghetti bowl portion of the ride received some new supports and track work. This figure 8 is going to be extremely compact. The coaster was about 70% finished during last week’s construction tour but it now looks to be about 80% finished. 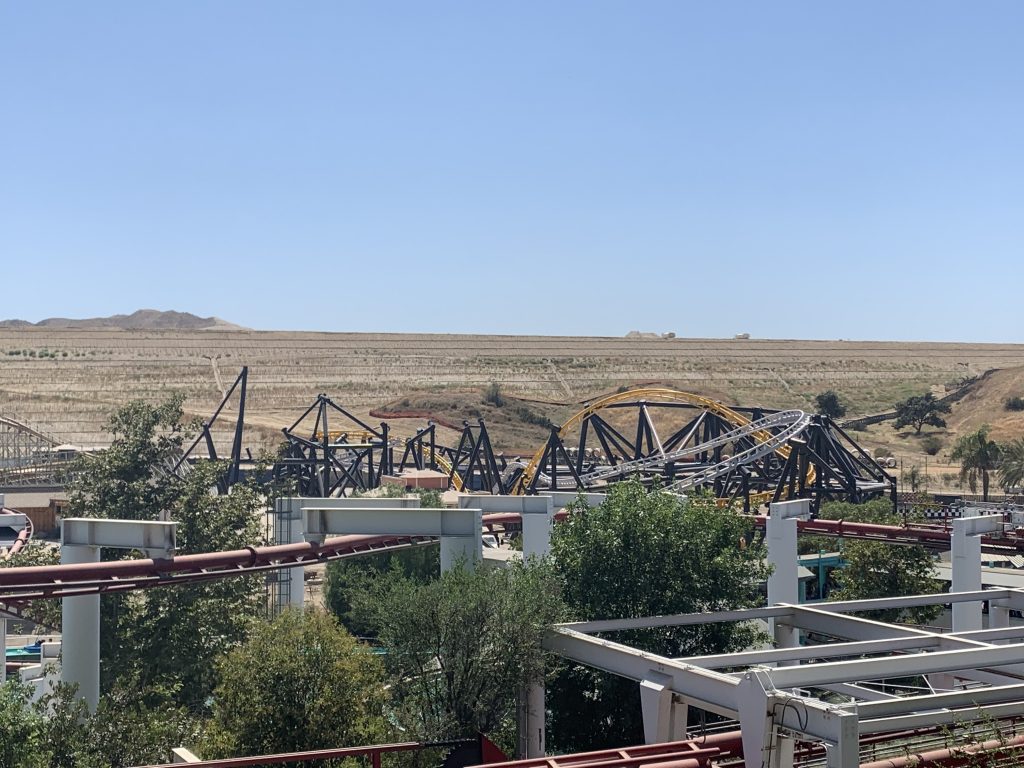 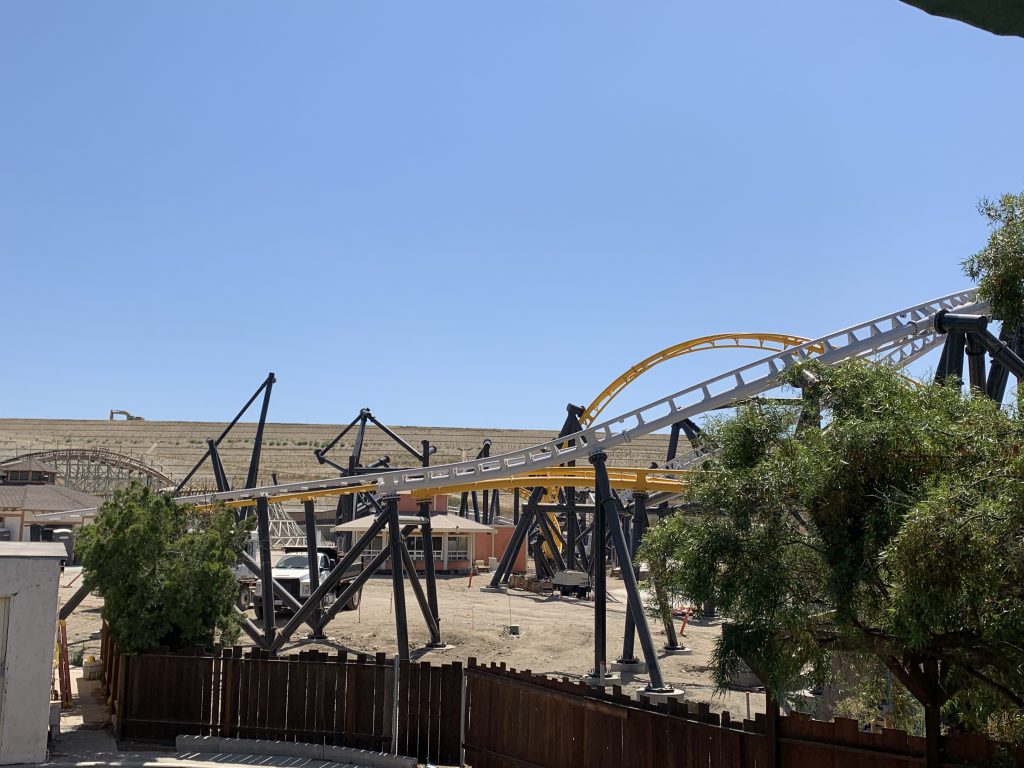 I can not stress how neat this coaster looks. It breathes so much life in to the area and it’s not even completed. 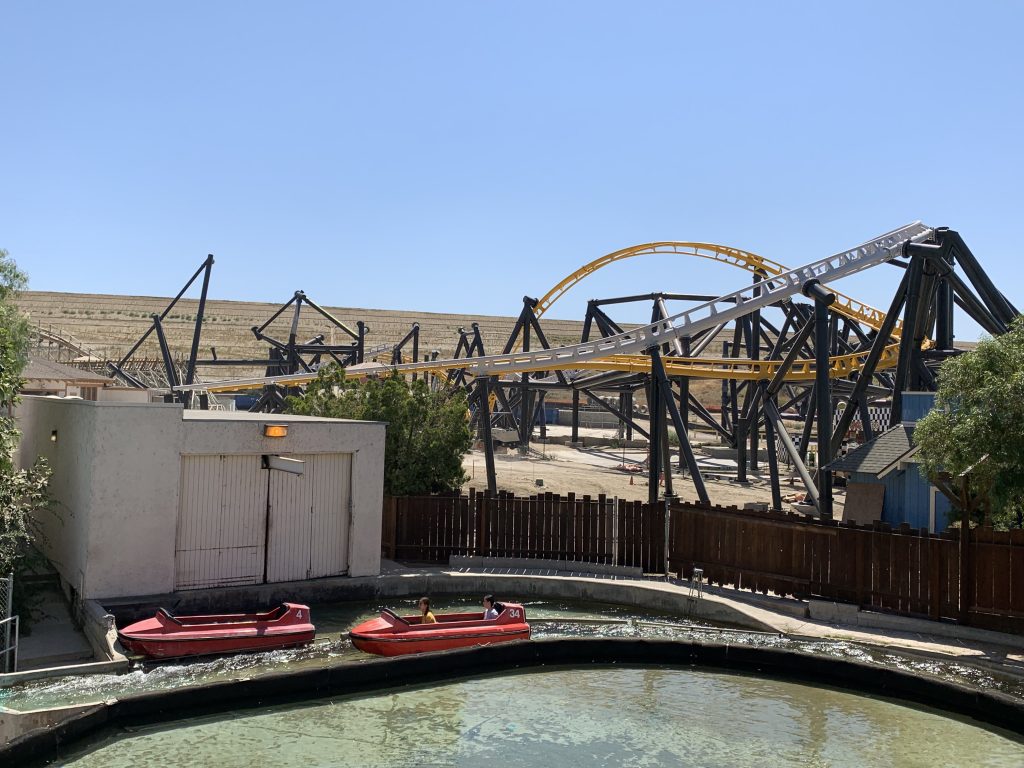 A lot of electrical work continues on the first and third launches. 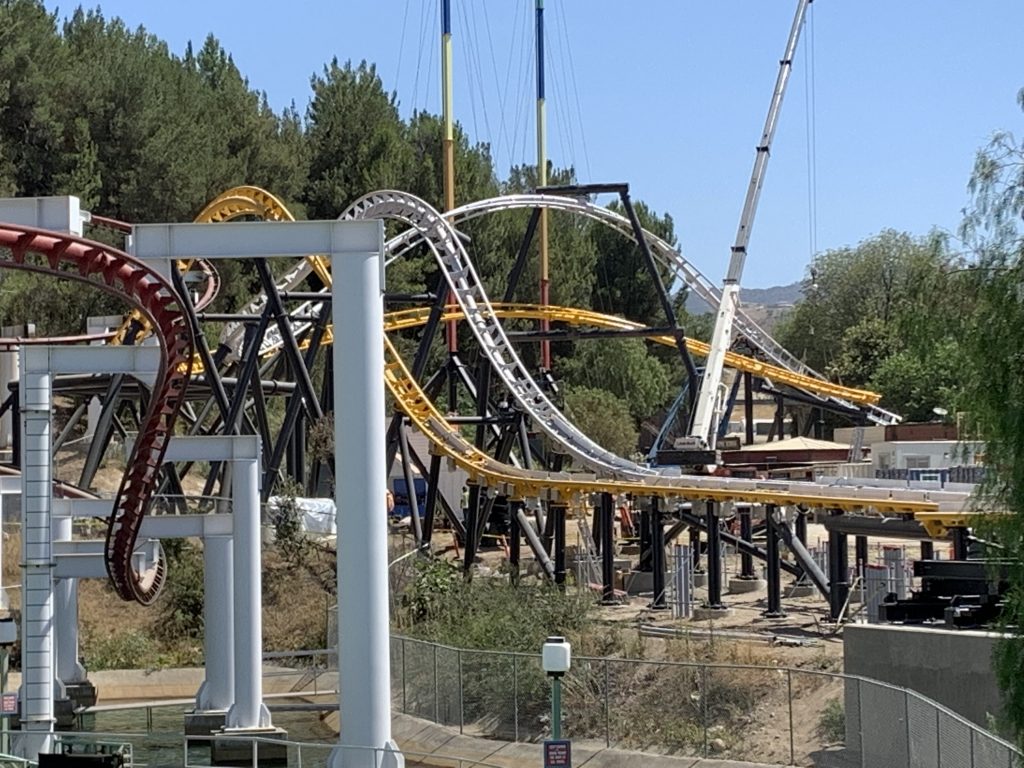 No sign yet of work on the station or surrounding area. As much as we want to see this coaster open soon, it is great the park is taking the time to perfect the new area. After all, it will be home to  the world’s first quadruple launch racing coaster. 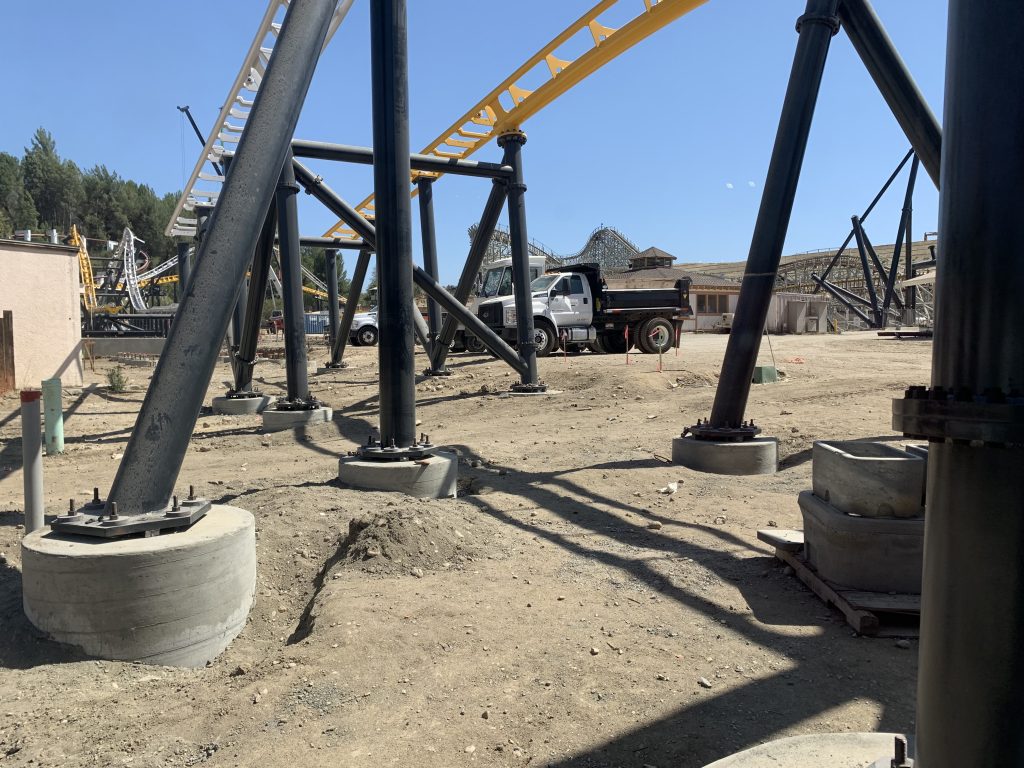 Be sure to check out our video park update of today’s visit as well! That is all for now. Thank you all for reading this far! Be sure to check back for more updates from your favorite theme parks and follow us on instagram and twitter for exclusive updates!