Sean: It’s the time of year for massive amounts of updates, so here’s one of four we’re providing this week: Knott’s Berry Farm and HANGTIME! Before we get to HangTime, we’ll take a look around the park on this slow Wednesday morning and we’ll discuss some of the important changes taking place as the park moves forward in the never ending process to maintain the park.

First off, with HangTime having been topped off, it pops up above the Ghost Town skyline as you enter the park. The ride’s construction has moved along incredibly quickly, and we’ve even heard about a projected opening time, but more on that later in the update. 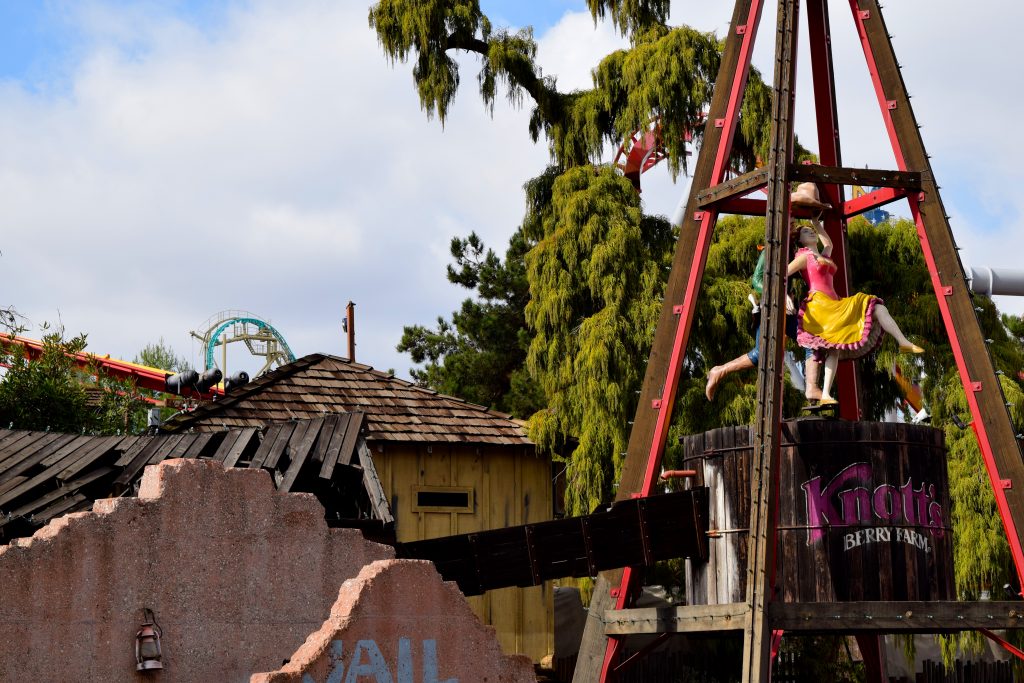 After a few rainy days, it was a beautiful day out at Knott’s Berry Farm, most rides running just one train, but really there was no need for more than that. 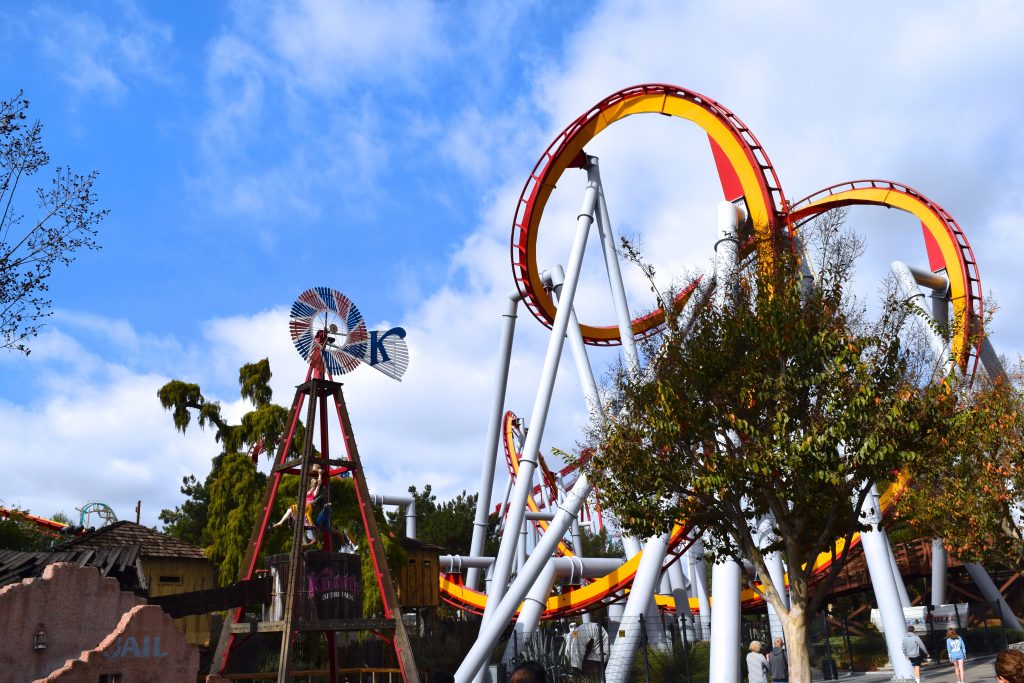 Silver Bullet’s wagon logo got replaced, and starts off the season nicely with a bright new logo. 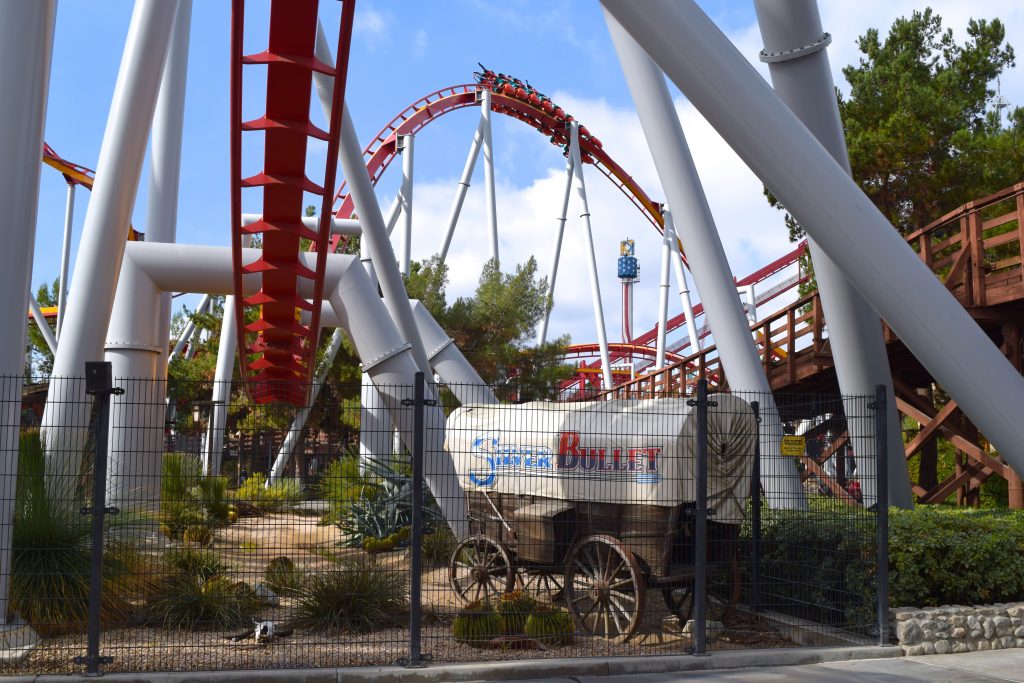 Sol Spin, while also bright and (relatively) new, remains closed. I have seen this ride closed more than I have seen it operate. But the good news is that several maintenance engineers were hard at work on the ride. 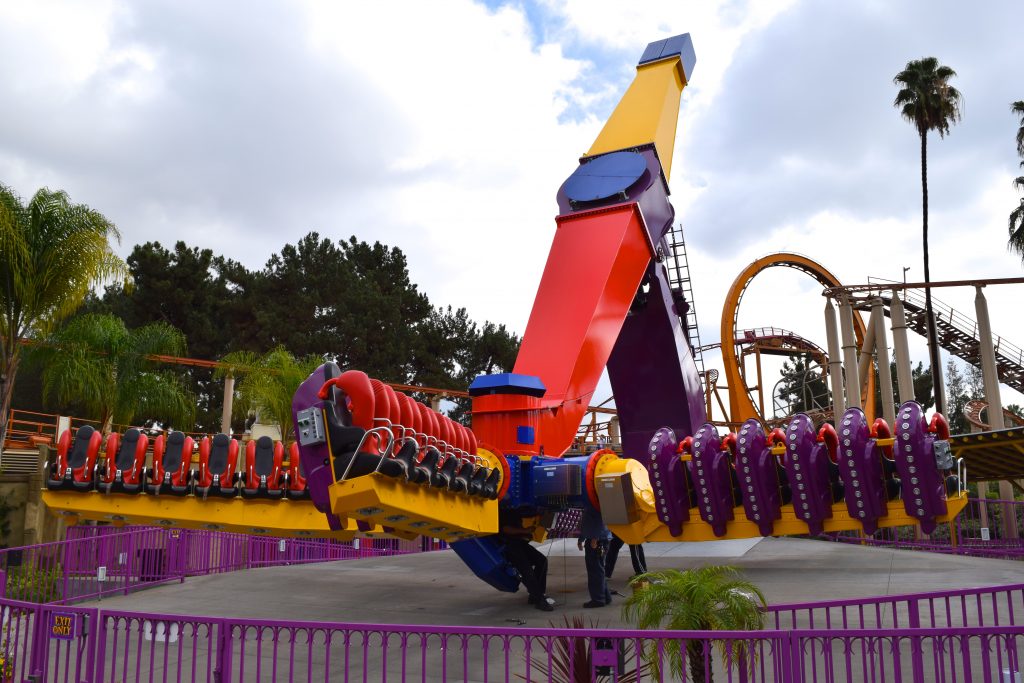 We refuse to ride Coast Rider since they added the horrible shin-guards, and many readers agree with us. Something we do like about the ride and the Boardwalk area as a whole is the newly painted black pool, which is much more realistic and brings out reflections on the water much better. 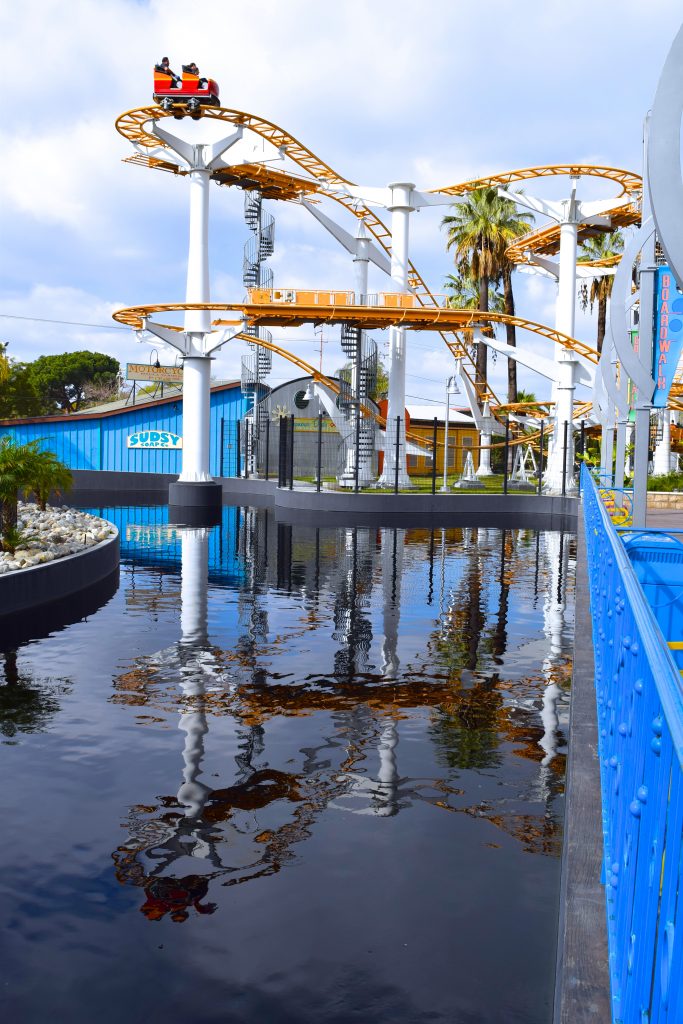 Maintenance is also busy inside the Sky Cabin, the return of which we hope to see this year. The Boardwalk should double in operating rides by summer time, including HangTime, Xcelerator and Sky Cabin. 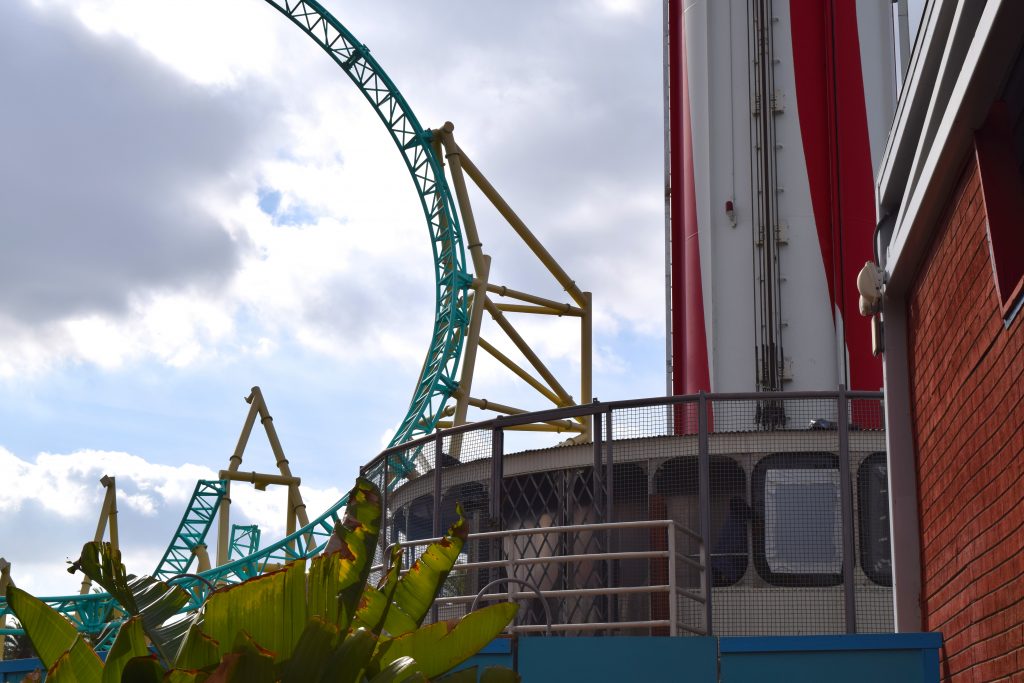 GhostRider is only running one train on these off-season days, but really they should be running it with two, as the line was quite long. 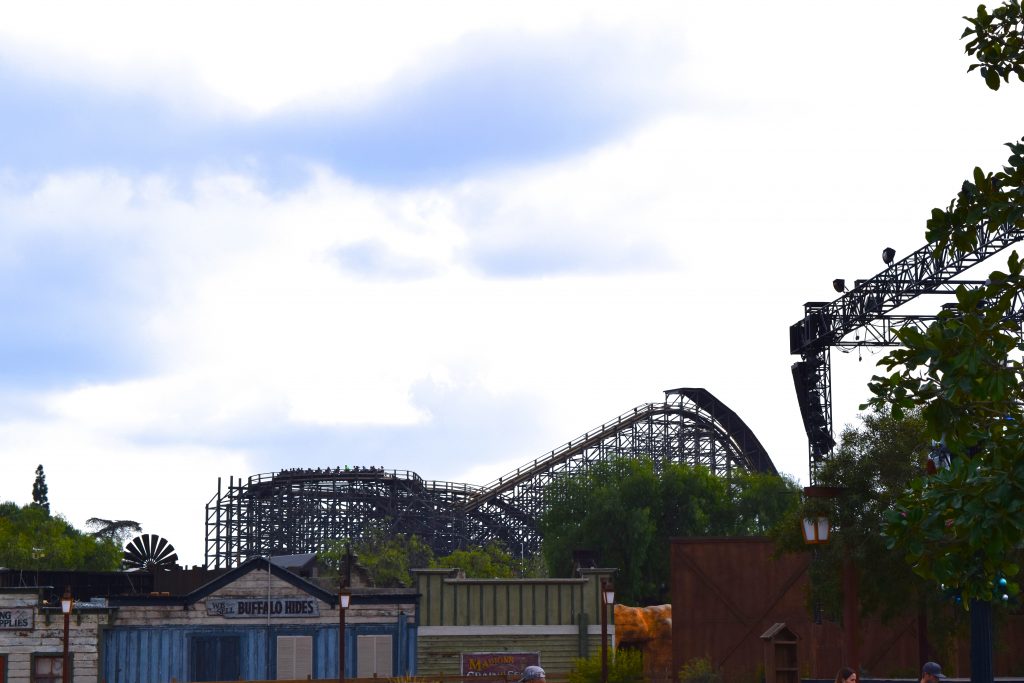 Luckily GhostRider runs incredibly well, and thus the ride is worth a significant wait, but with three trains for the ride, running two at all times should not be terribly hard. A heads up to those visiting the park that GhostRider is closed for refurbishment from January 16th- February 2nd. 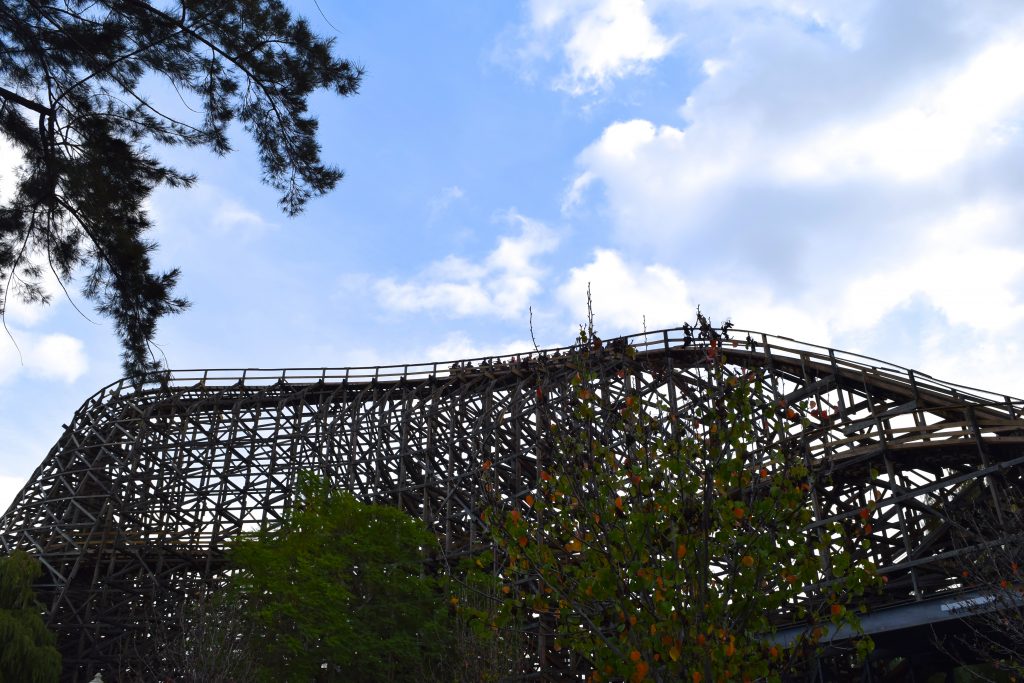 The Timber Mountain Log Ride has entered an extensive refurbishment. After a lawsuit against the park claimed that the water levels were to inconsistent in the lagoon, causing harm to several riders, the park is now making efforts to correct the water level error and completely refurbishing the ride while they’re at it. Timber Mountain Log Ride reopens on February 9th. 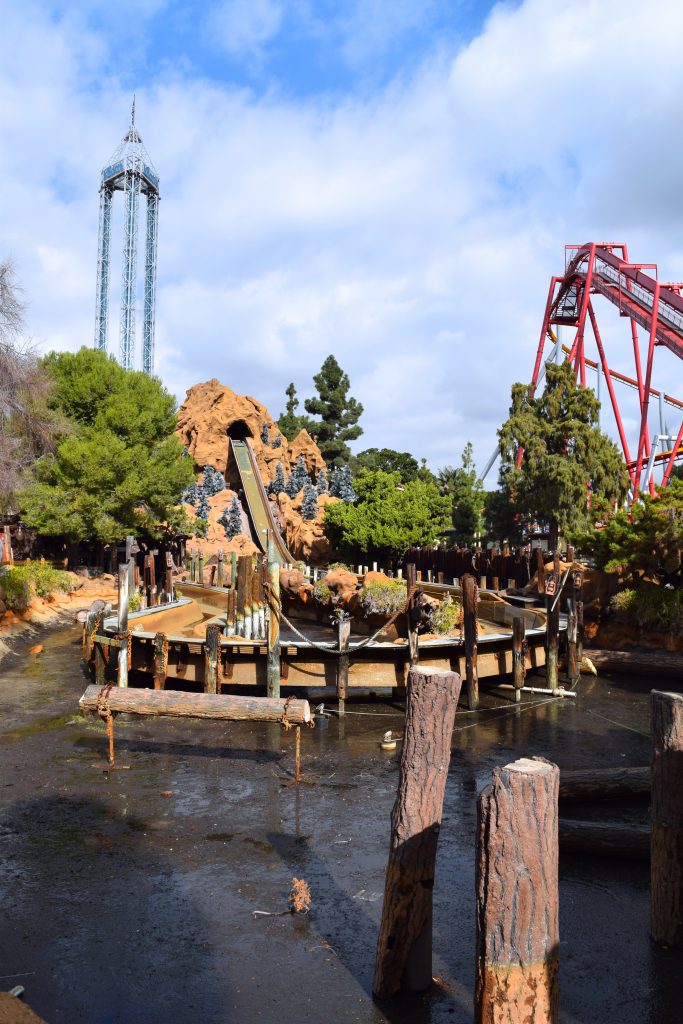 Towering over the classic Calico Mine Ride is the park’s newest coaster, and the section of the update you have probably been waiting for! HANGTIME! 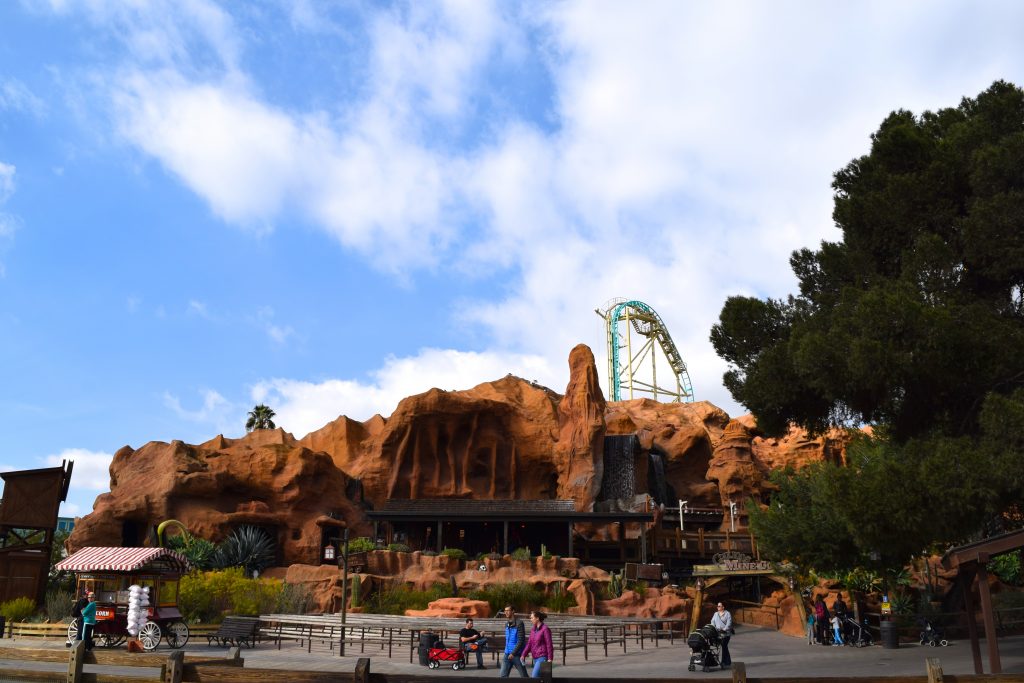 First things first, the complete holding-brake has been placed and is incredibly steep. It has to hold a 4-car train, which is why the holding-brake is so long, but at the same time it is steeper than any of Gerstlauer’s holds before, at an angle of about 60 degrees. Off to the right of the drop you may notice the corkscrew that was unfinished yesterday, but was topped off overnight. 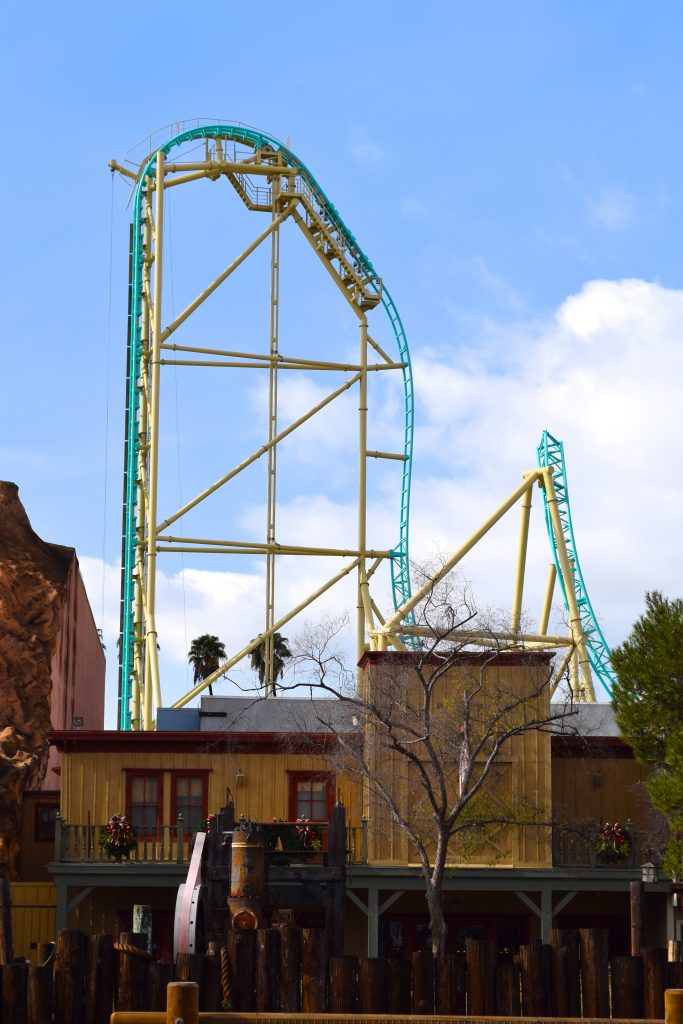 The Pretzel Knot/ Top Hat is one of the very few elements that has yet to be completed. 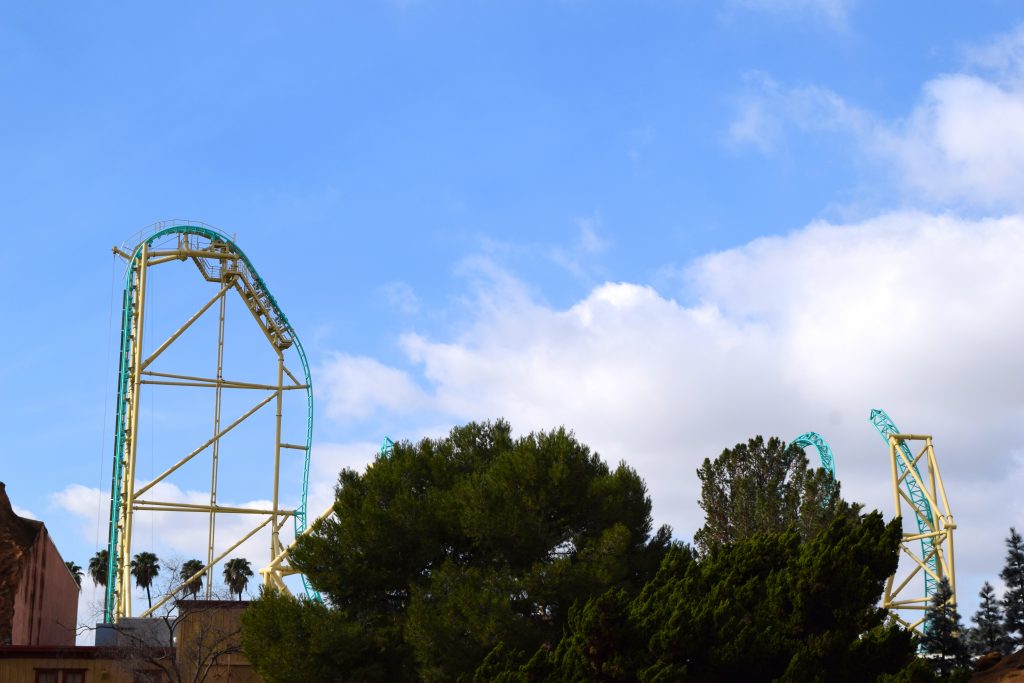 The second half is in place, and looks like it’ll be one of the real hangtime moments of the ride. 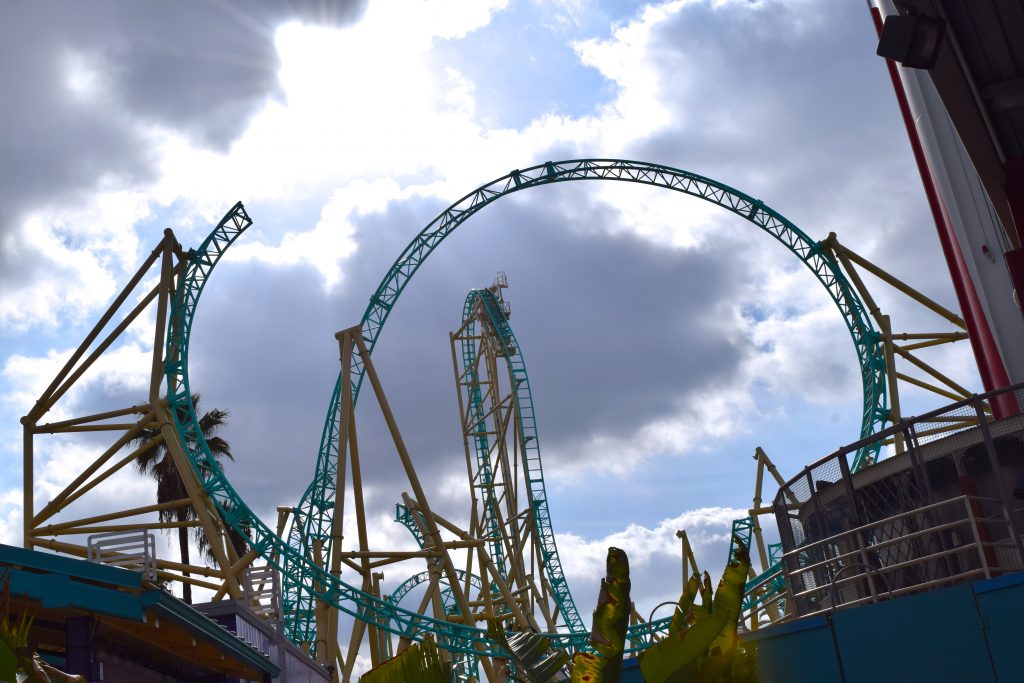 We must appreciate the superstructure. The supports are beautiful. 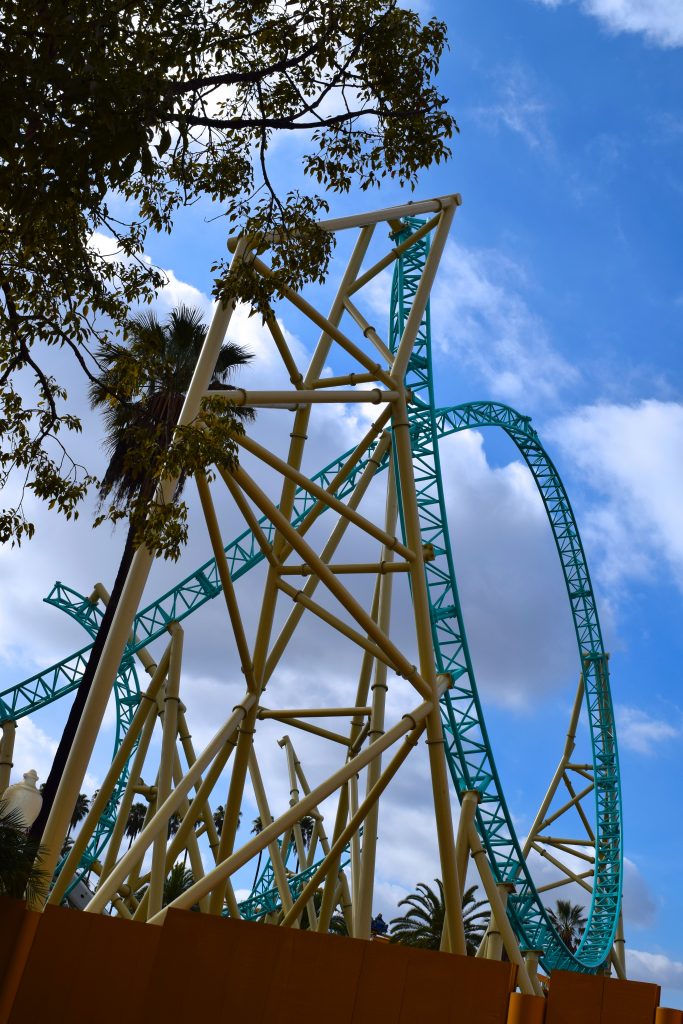 As you can see in this overall shot of the new Infinity Coaster, the horseshoe turnaround and intense double down have been put in place as well. 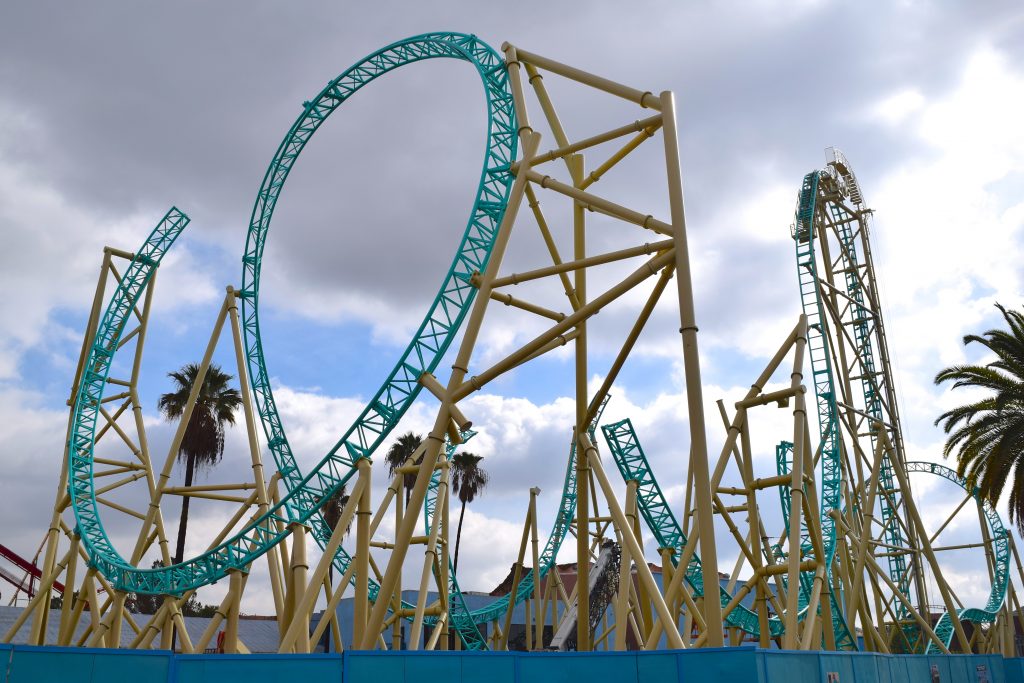 Here’s a bit closer look, note that the supports sticking out into the sky are for the Cobra Roll and the just-finished corkscrew. 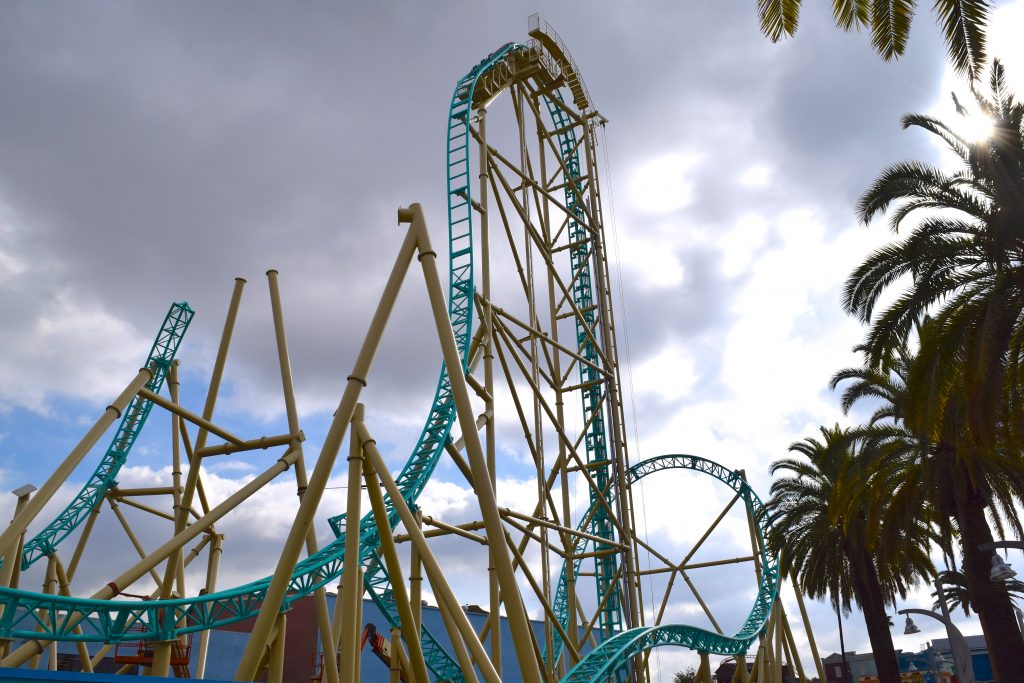 A little Supreme Scream photobomb, the only operating thrill ride on the Boardwalk. 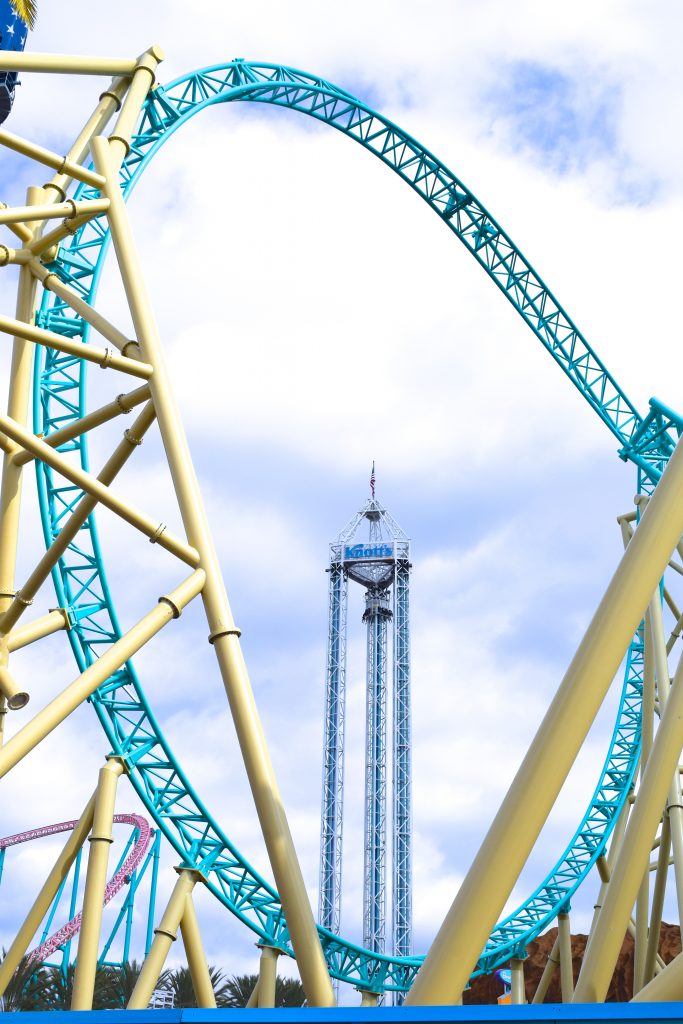 The drop is just passed 90 degrees steep, but this drop should really demonstrate that all the mechanical pieces and catwalks are already installed on the lift and holding-brake, moving the ride even further along in its rapid construction process. 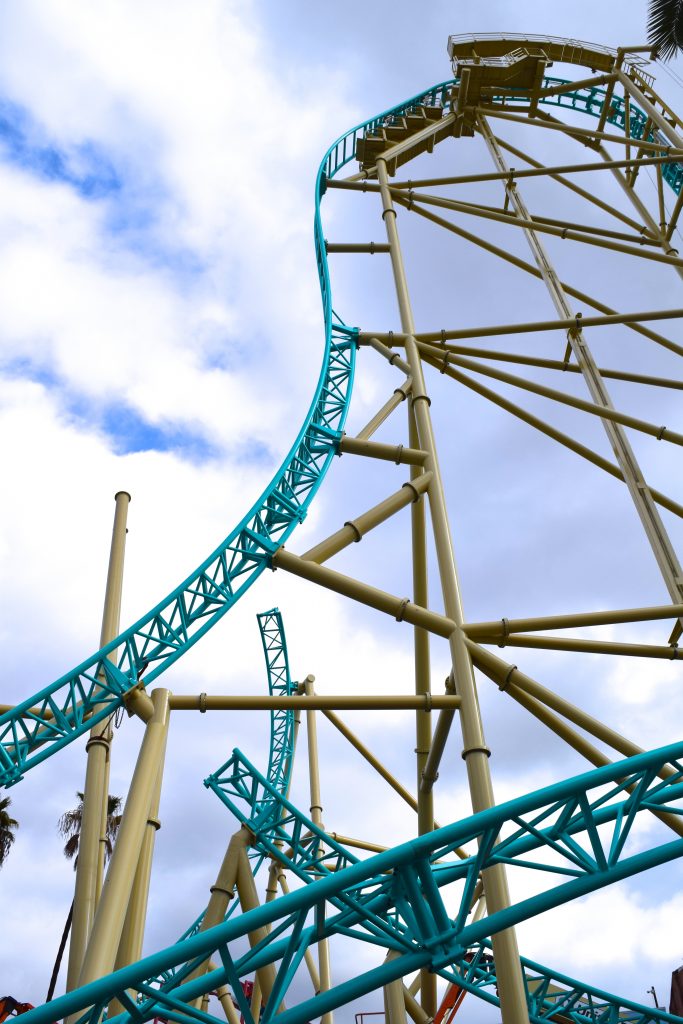 The beginning and ending of the Cobra Roll are in place, and so are all supports, it should not take long for the rest of those track pieces to go up. 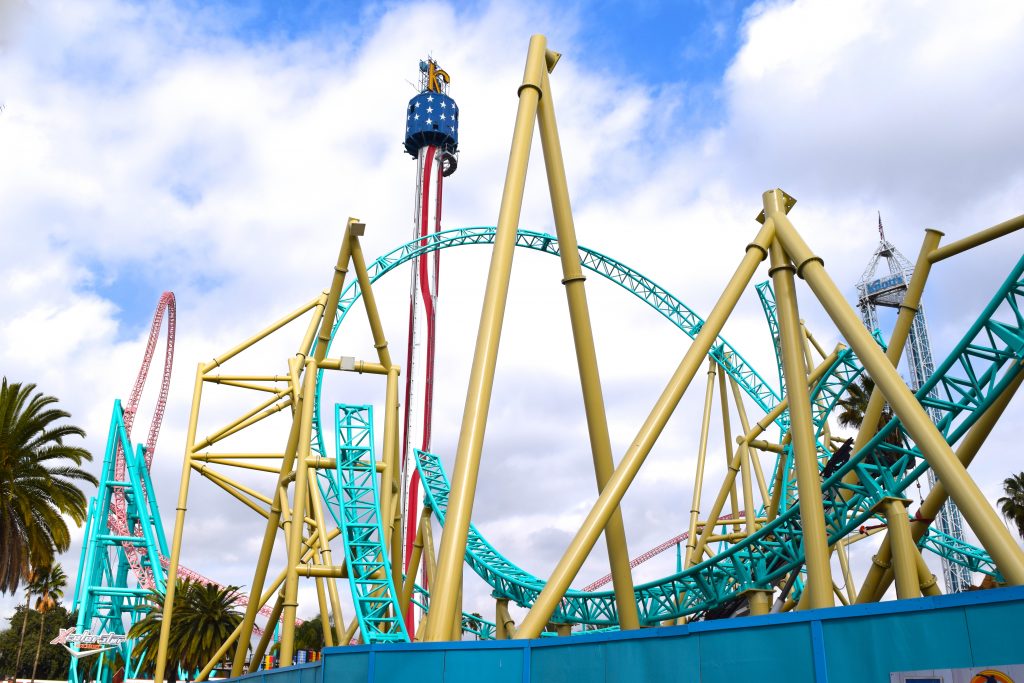 OMG THAT SUPER SNAPPY THIRD INVERSION! The Horseshoe was recently constructed and is one of the more impressive elements on the ride now it has been constructed. The double down coming out of the element is particularly fast looking. 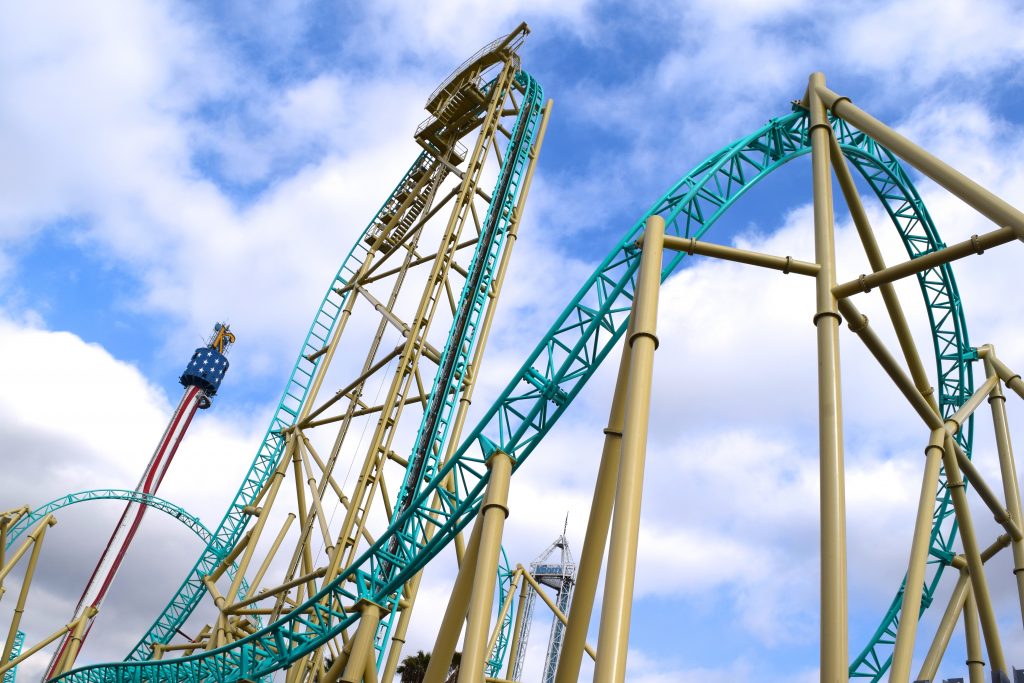 Below the turnaround element, we find the station construction has also taken off. All of this for a possible opening way before anyone would’ve imagined. 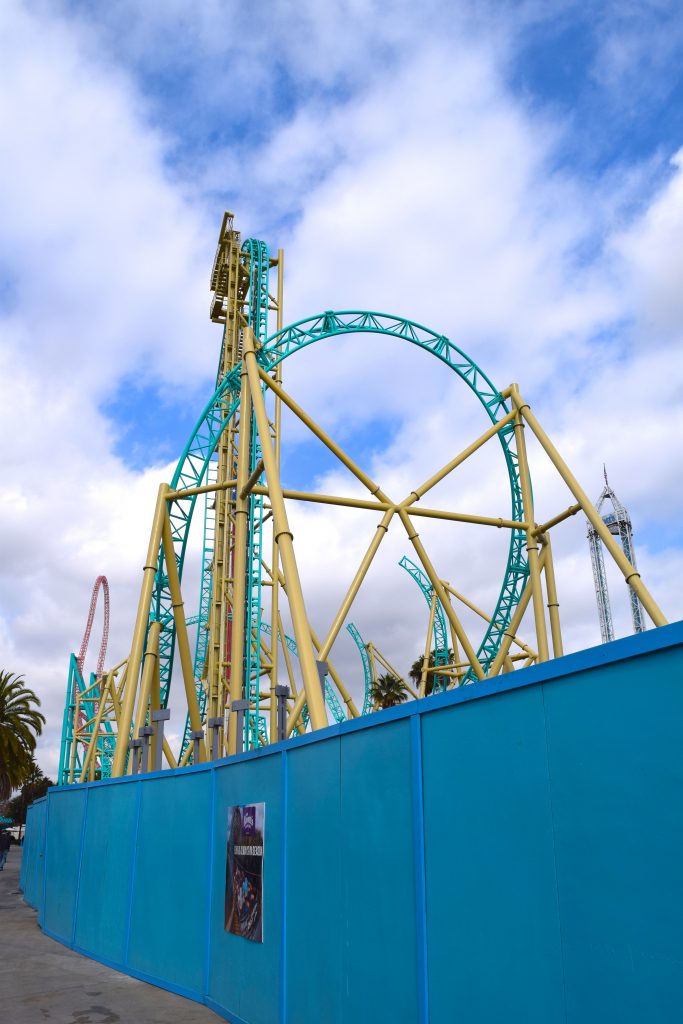 Let’s appreciate the parallel movements of all three first inversions. 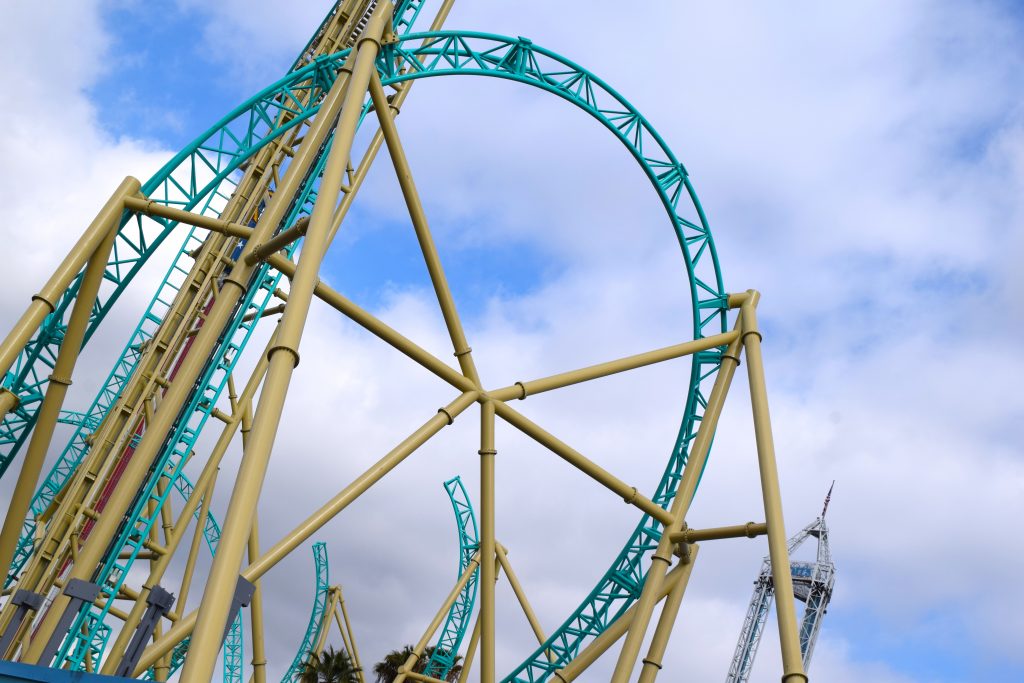 Here are some final overall shots of the construction zone. The corkscrew has been completed just shortly after we departed from the park, and the ride is again a step closer to becoming one of the park’s very best attractions. 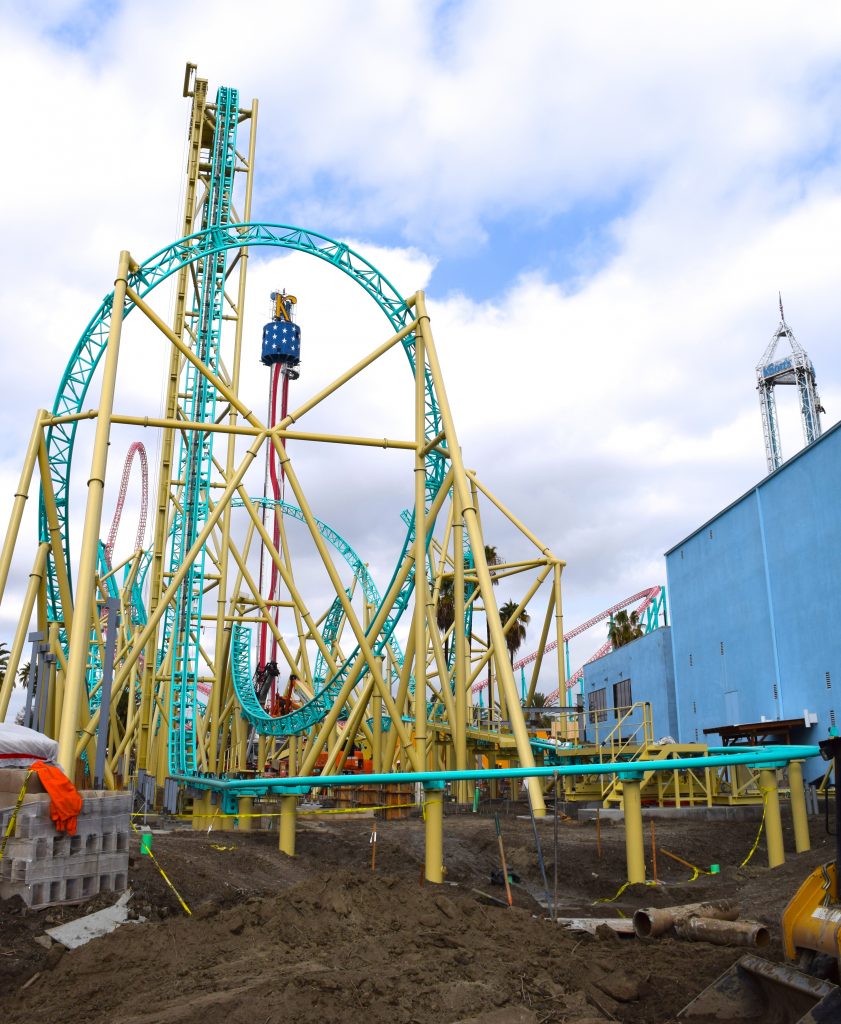 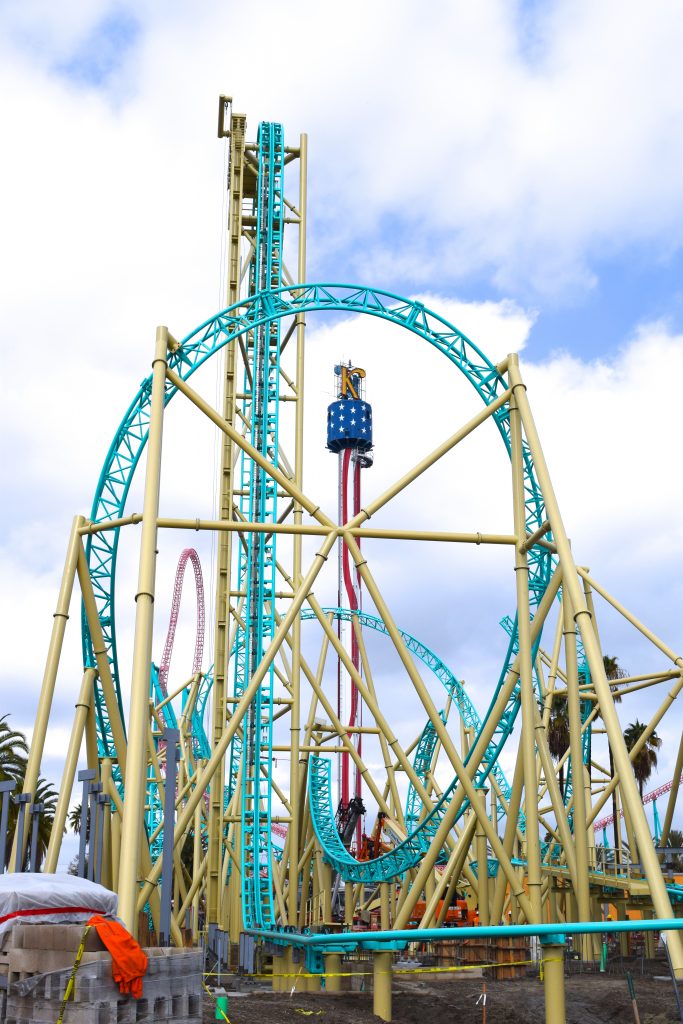 Some sources have told us that the park and manufacturer are looking at a mid to late March opening to advertise the ride as part of the Boysenberry Festival, which starts on March 16th. With only two elements left to complete on the ride construction, that may very well be a realistic goal for the park. 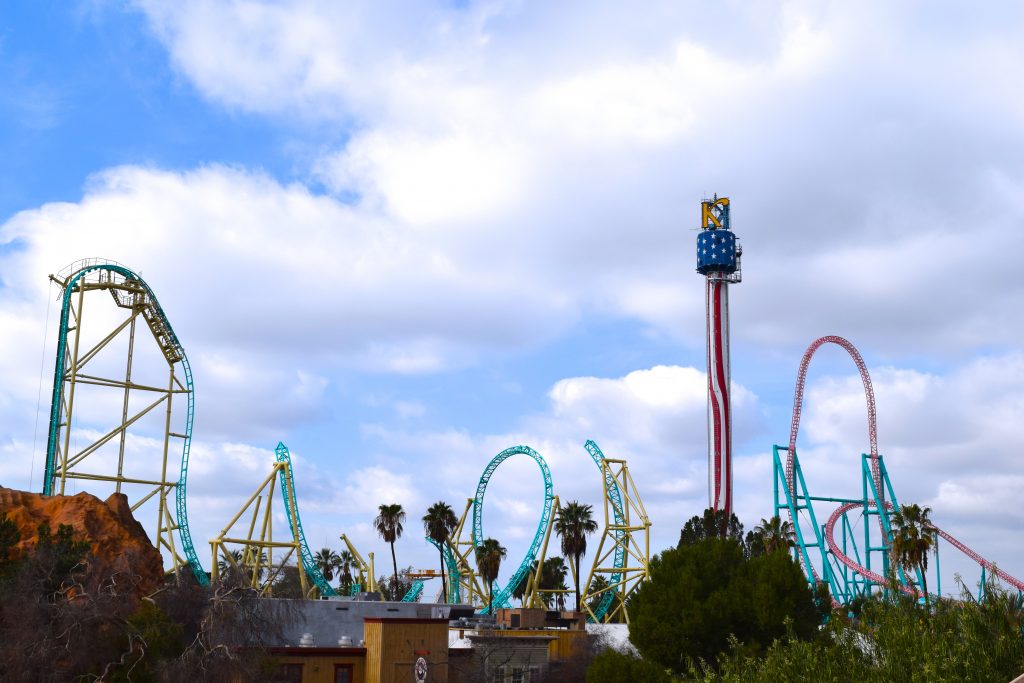 Thank you for checking out this Knott’s Berry Farm and HangTime update! We’ll be back soon for another update, as well as our Asian tour reports! For now stay tuned for a brand new Disneyland Resort and Six Flags Magic Mountain Update!